A day trip to Guatapé

La Piedra
Wow - the view from the top of La Piedra de Peñol, just outside of Guatapé - is just wow. Just as is claimed on the sign on the way up to the 'rock', this is probably one of the most beautiful views that I've ever seen. 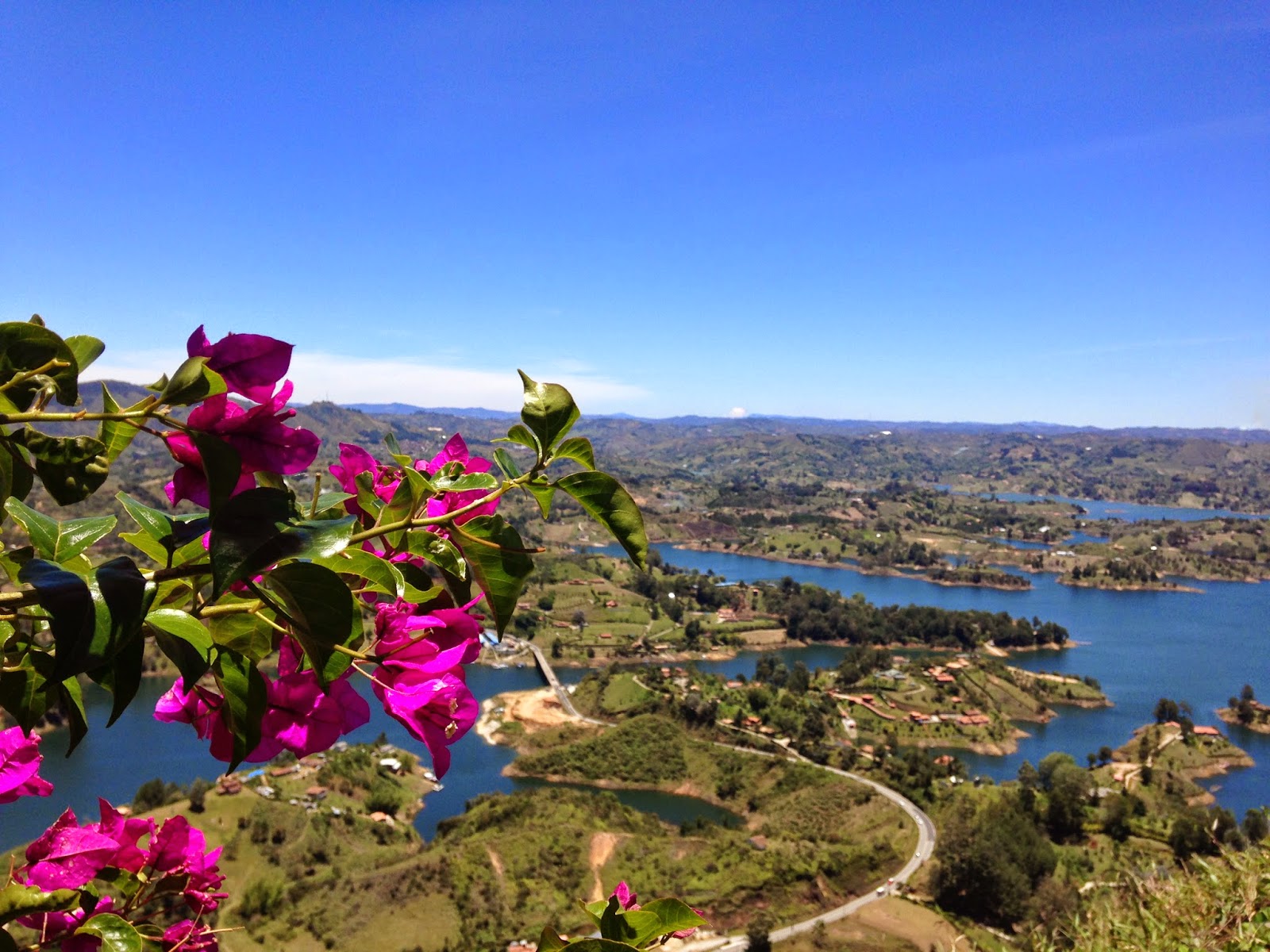 
We went to Guatapé to climb La Piedra and to visit the town on a day out from where we were staying in nearby Medellín.  We'd heard good things about the area, but I had no real expectations, which helped to amplify the wow factor once we got there. 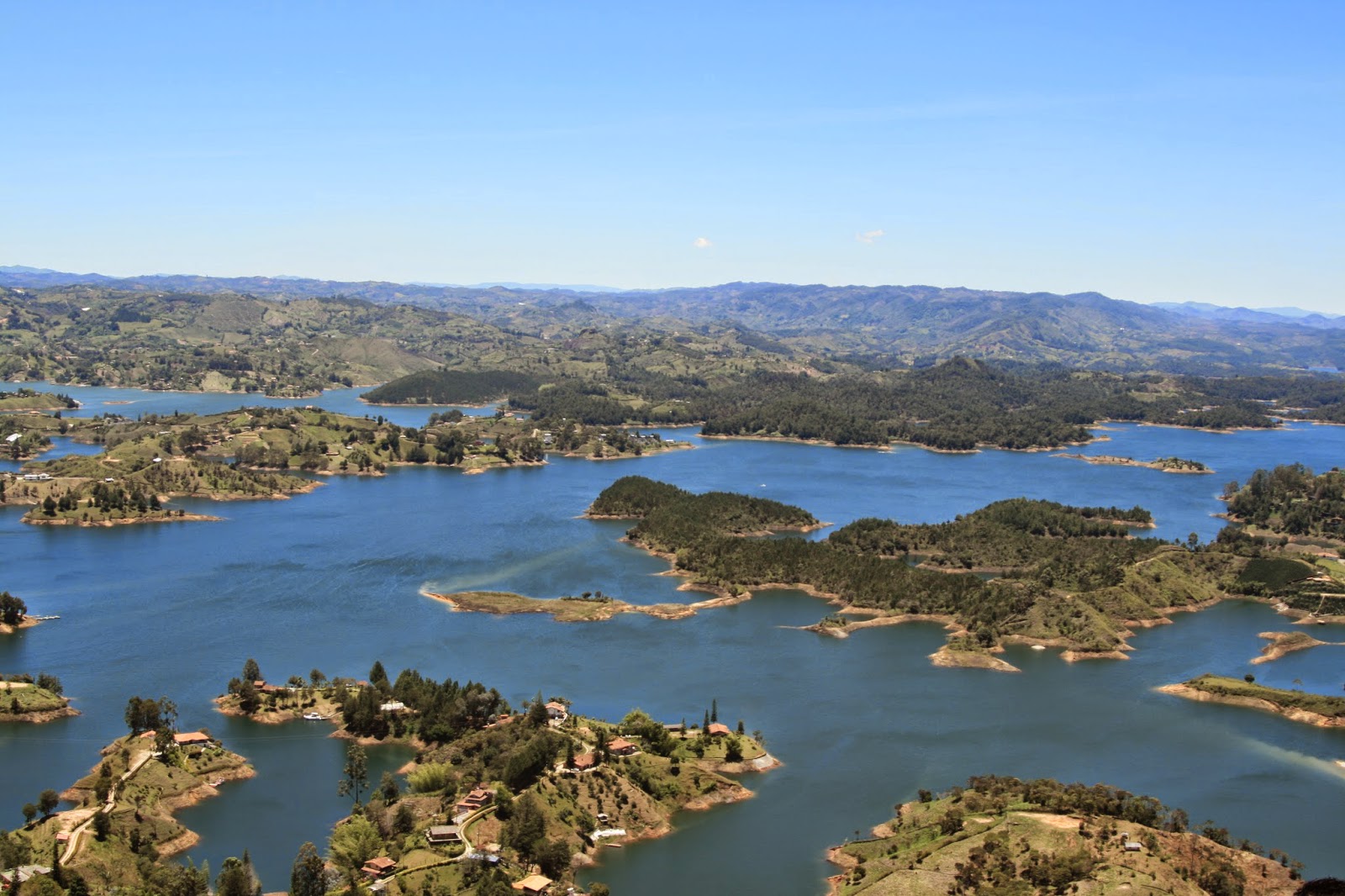 La Piedra is a strange rock formation, believed to be the product of a volcanic eruption. It has become a tourist attraction, since a staircase was built into the side, taking you up to the top of of its 200 metres. 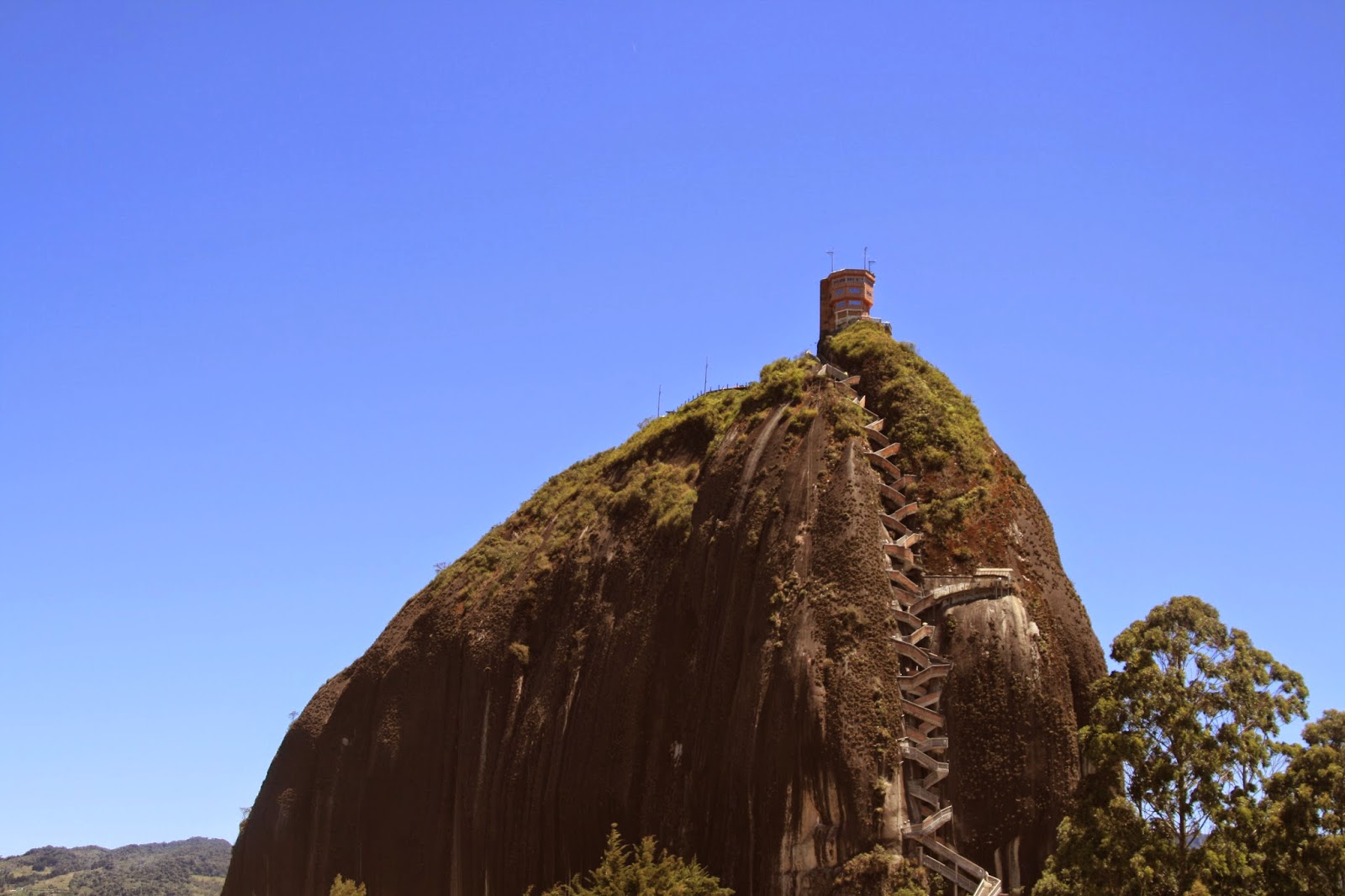 We climbed up, enjoying the views all the way up the rock's 659 steps and relaxed at the top, with some lunch. 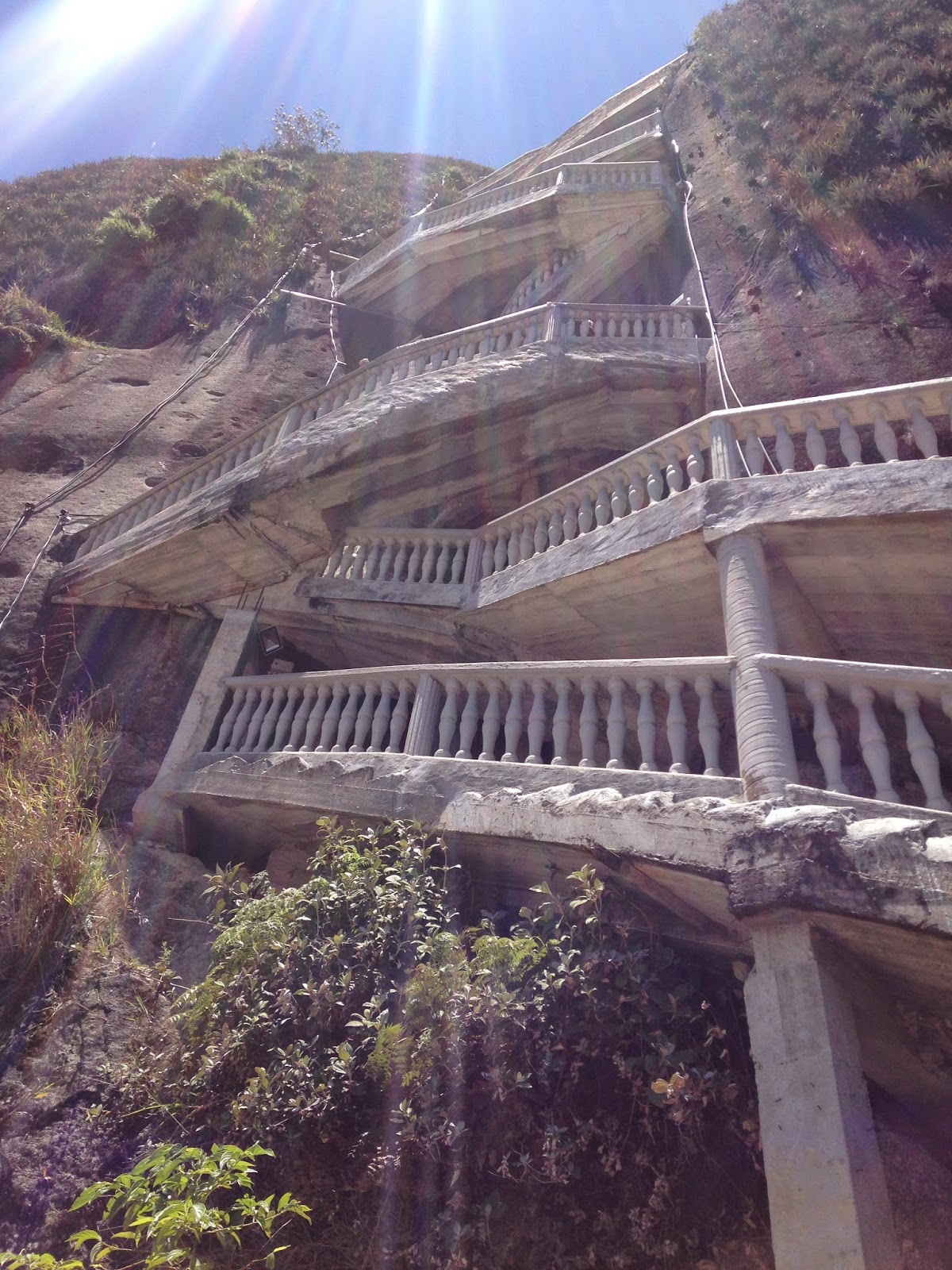 The Lake
After spending a couple of hours going up and down and relaxing at the top, we headed out onto the lake for a boat ride. The beautiful area around the lake has a bit of a dark past as this is where lots of drug lords used to own holiday homes, which our captain pointed out to us as he took us around the lake. 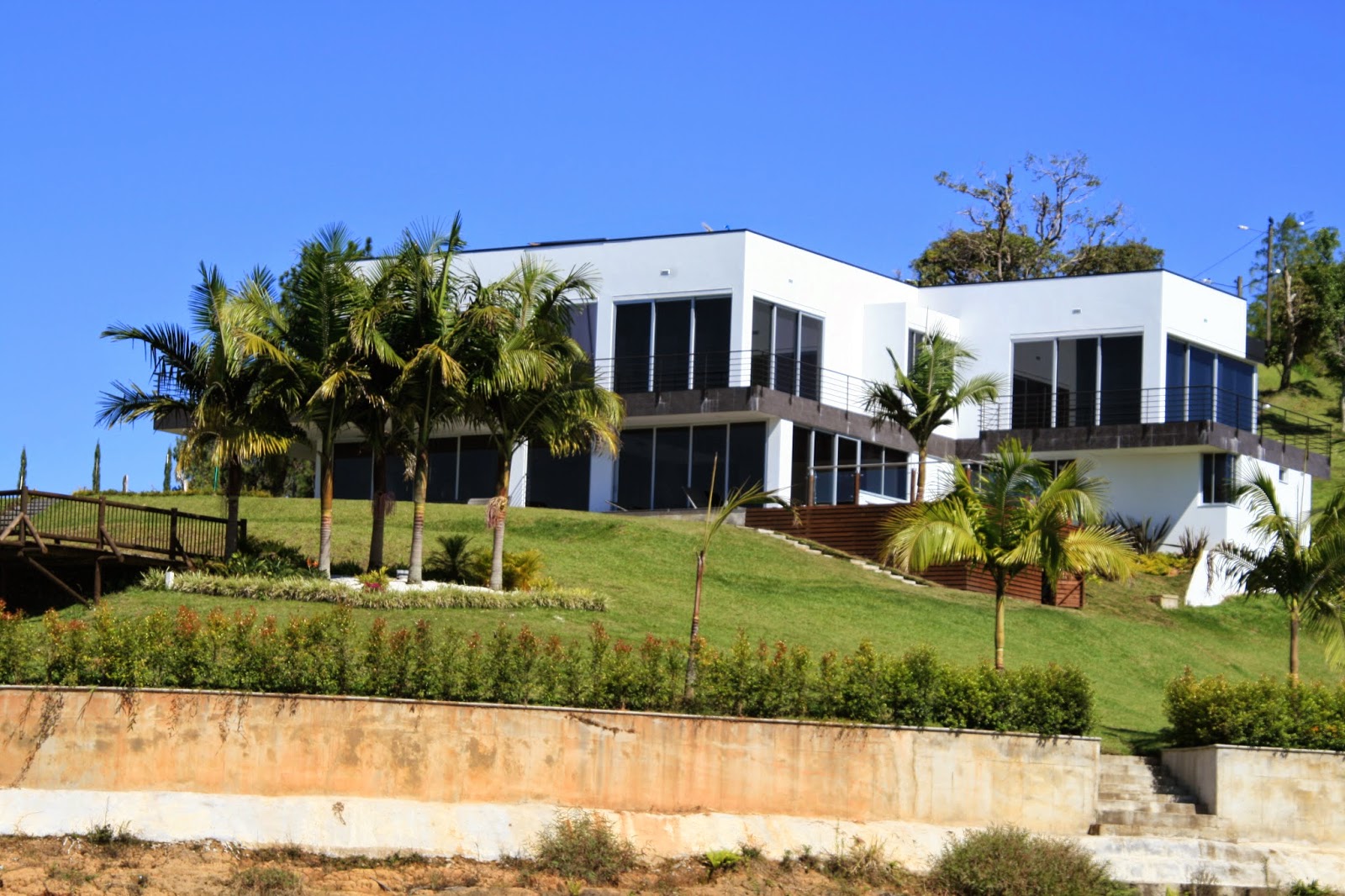 He kept showing us houses and saying that they'd once belonged to a particular person and when I asked him to clarify who that was, I was told it was another narco-terrorist, who was now in prison (or no longer with us). 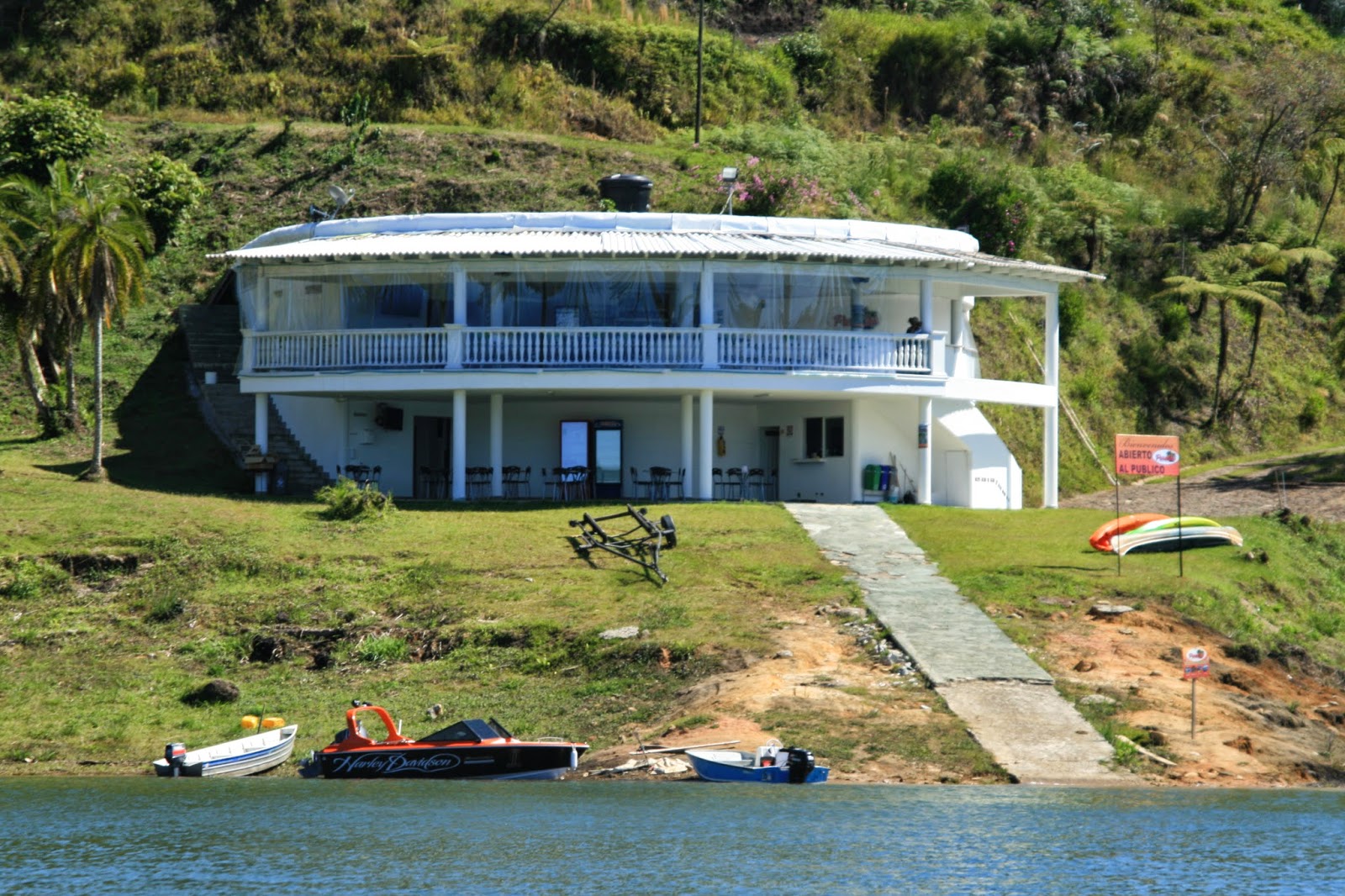 We were even shown the bombed out mansion of the drug lord of drug lords - Pablo Escobar. He was the head of the Medellín Drug Cartel who was gunned down by the Colombian authorities in 1993, ending his rein of terror and hold on Medellín. 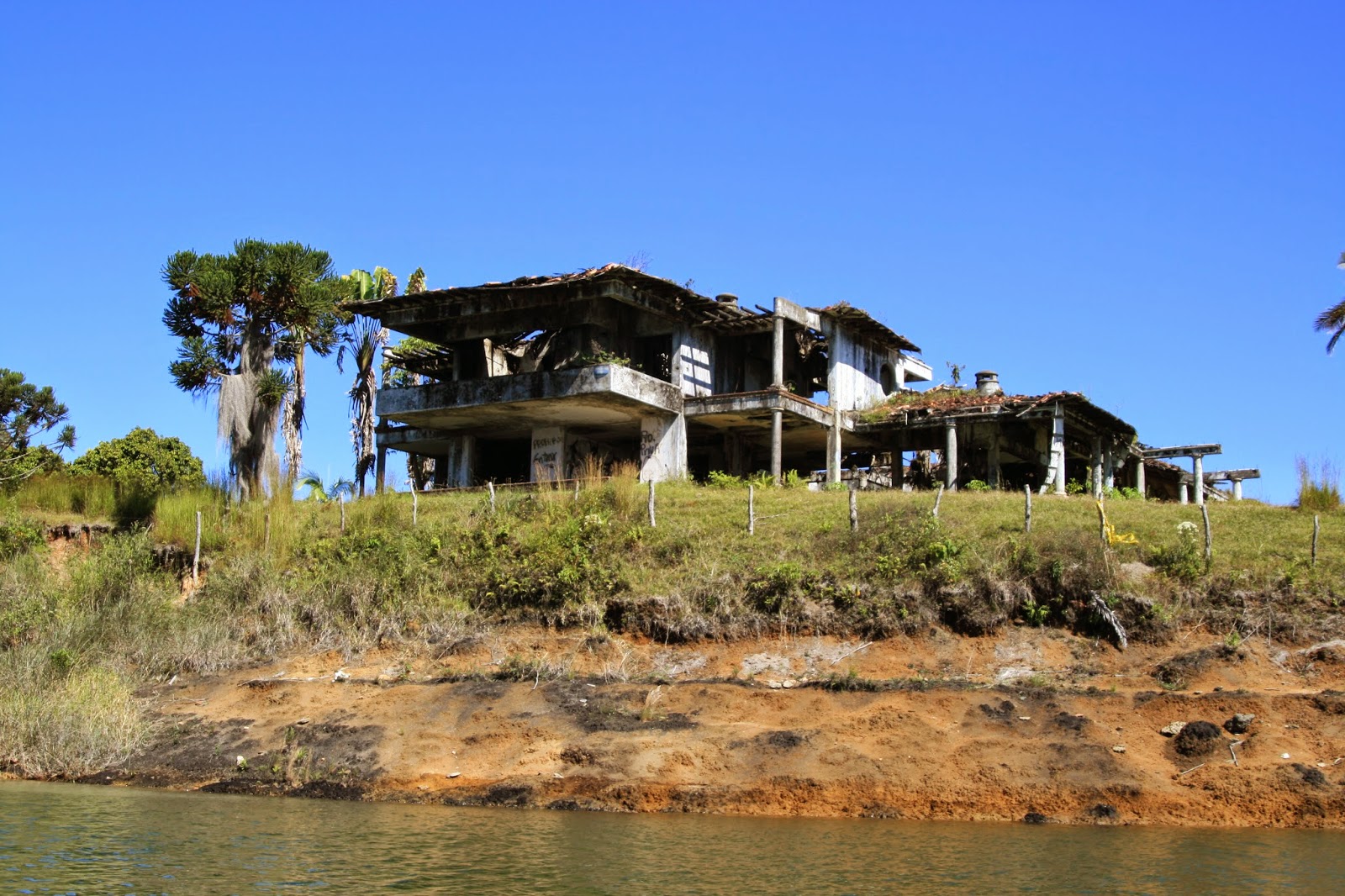 We were also told about how the lake was created by flooding the local area to build a hydroelectric damn. The town of Viejo Peñol had also been flooded as part of the development and now sits at the bottom of the lake. Sticking out of the lake is a cross, marking where the town's church is located. 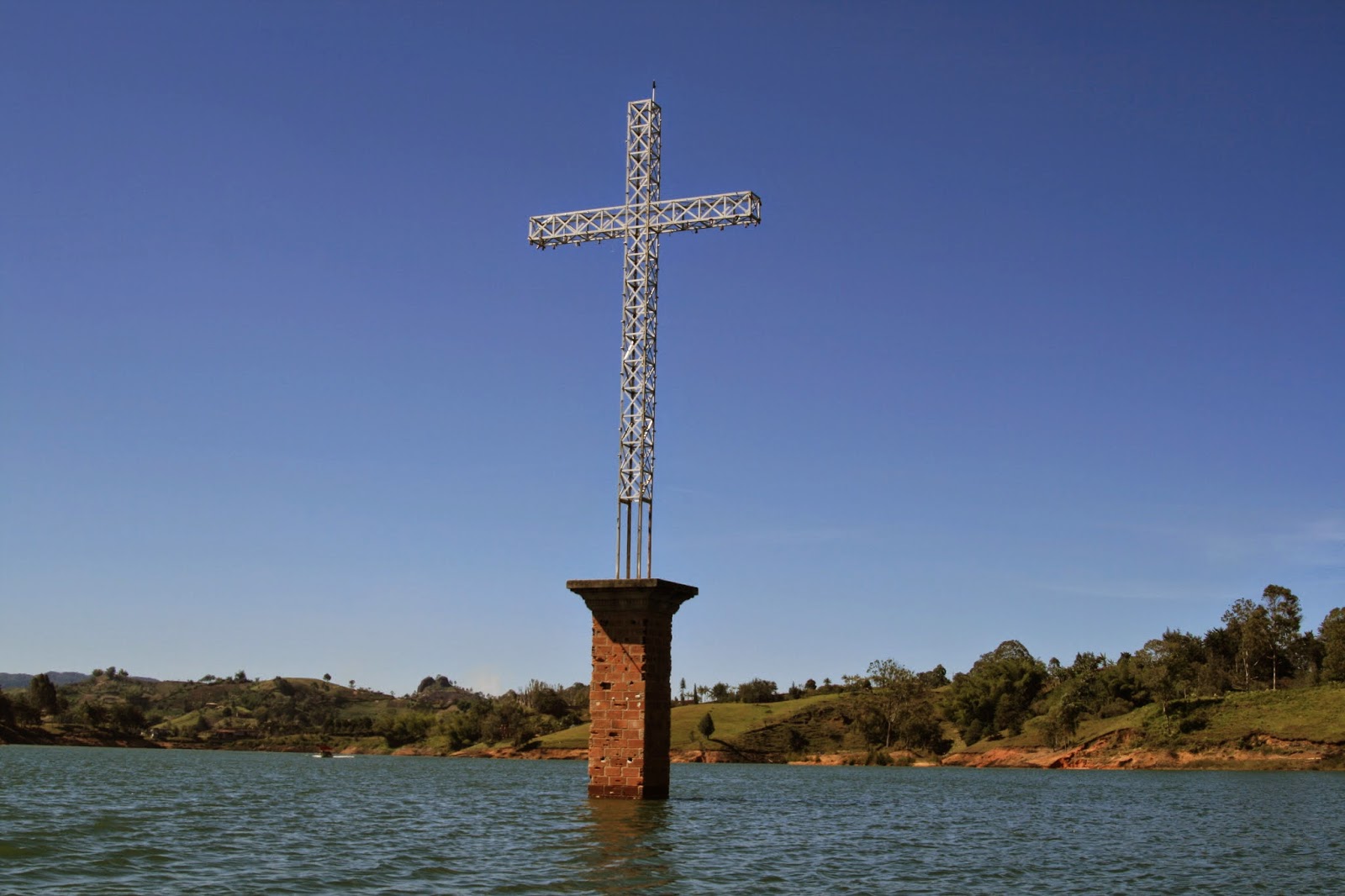 Guatapé
Once back on dry land, we caught a bus into Guatapé - a picturesque pueblo, known for its colourful 'zocalos', which are the name given to the friezes painted onto the bottom of the buildings. 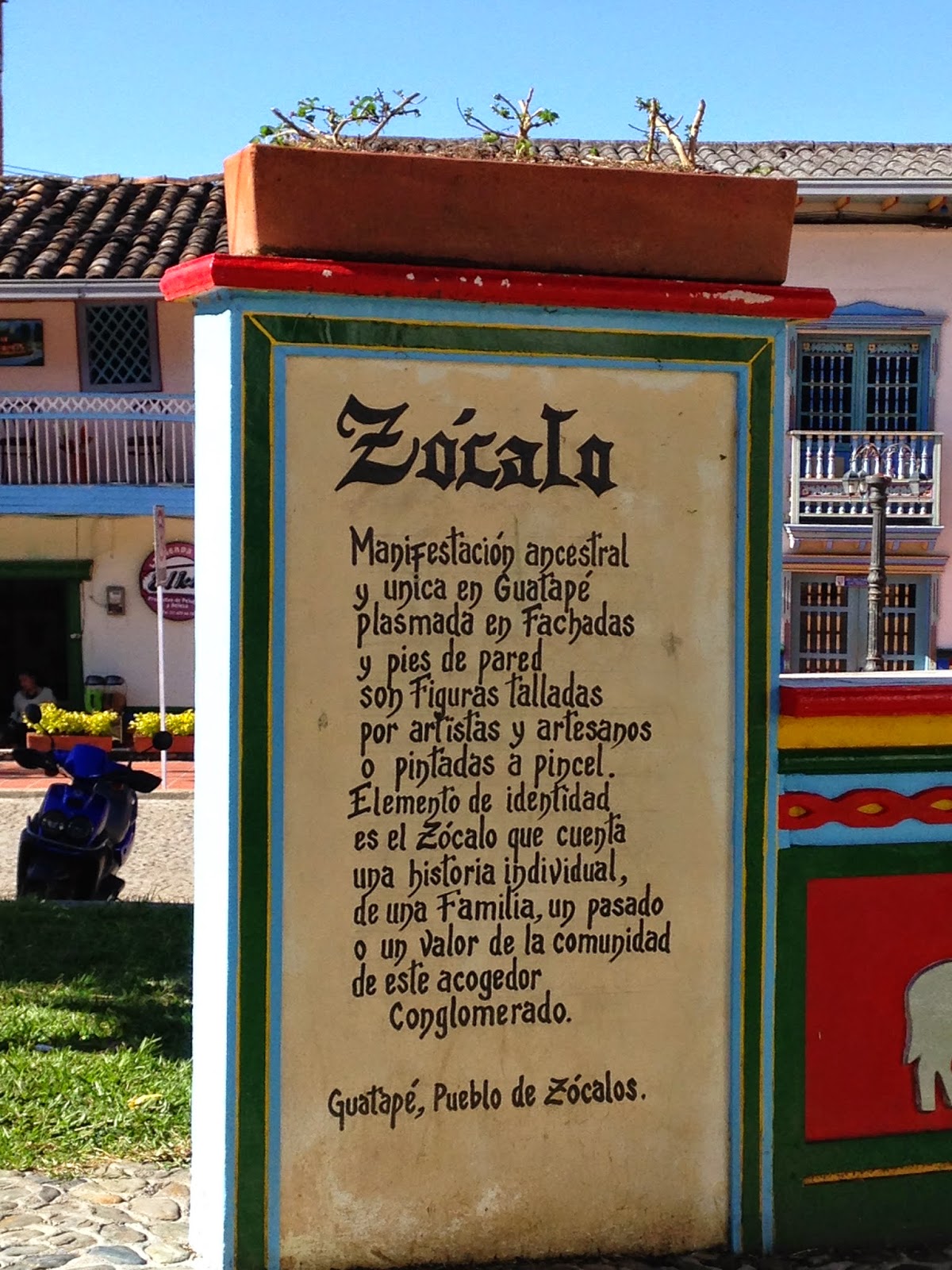 One story behind the development of the friezes is that inhabitants of the town started to put extra coats of paint on their homes to protect the walls from children's excessive games of marbles! 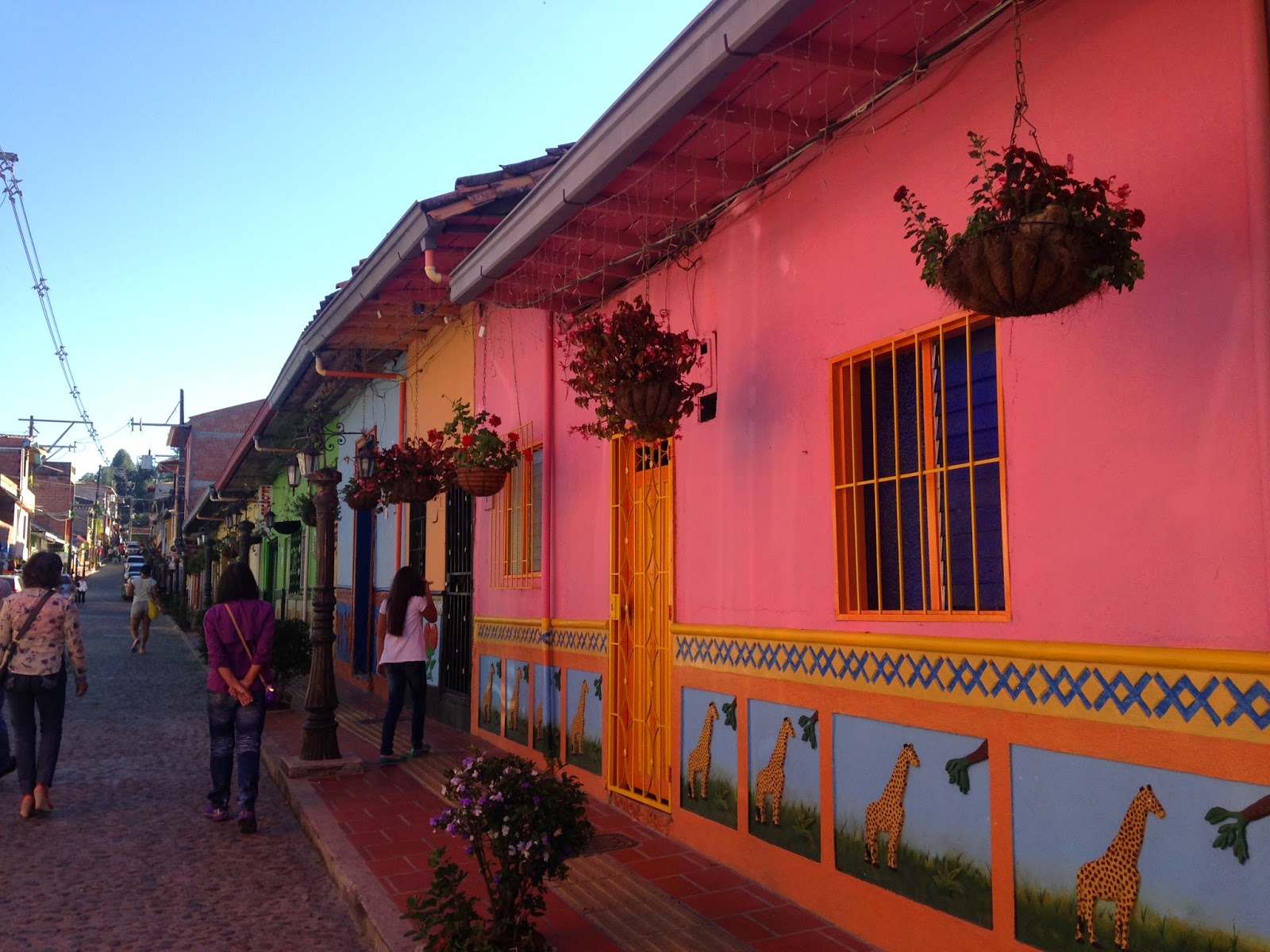 These extra layers of paint soon developed into elaborate and creative pictures, which are designed to reflect something of significance to the homeowner. 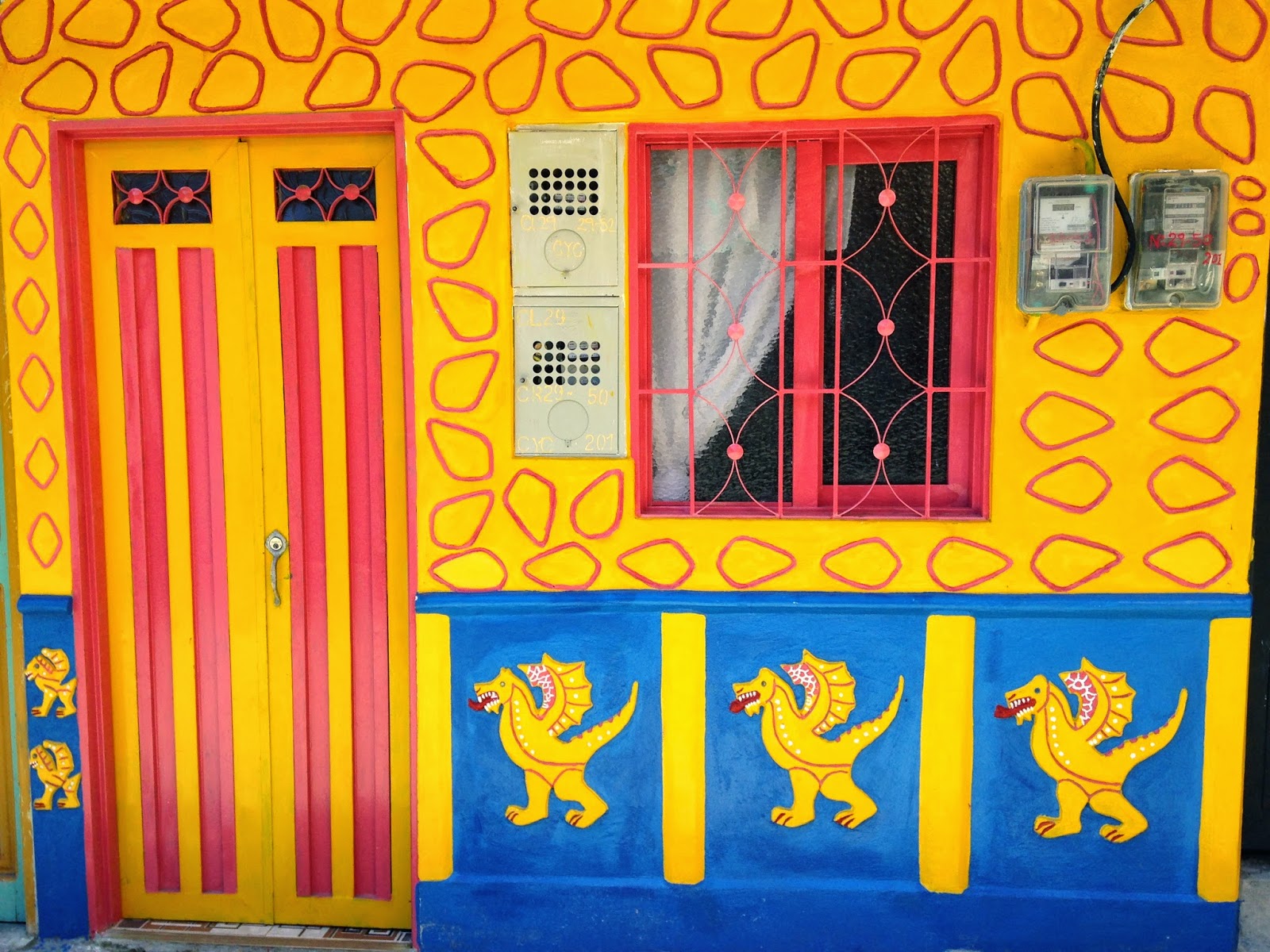 We enjoyed wandering the cobbled streets, admiring the brightly coloured buildings and photograhing our favourite zocalos. 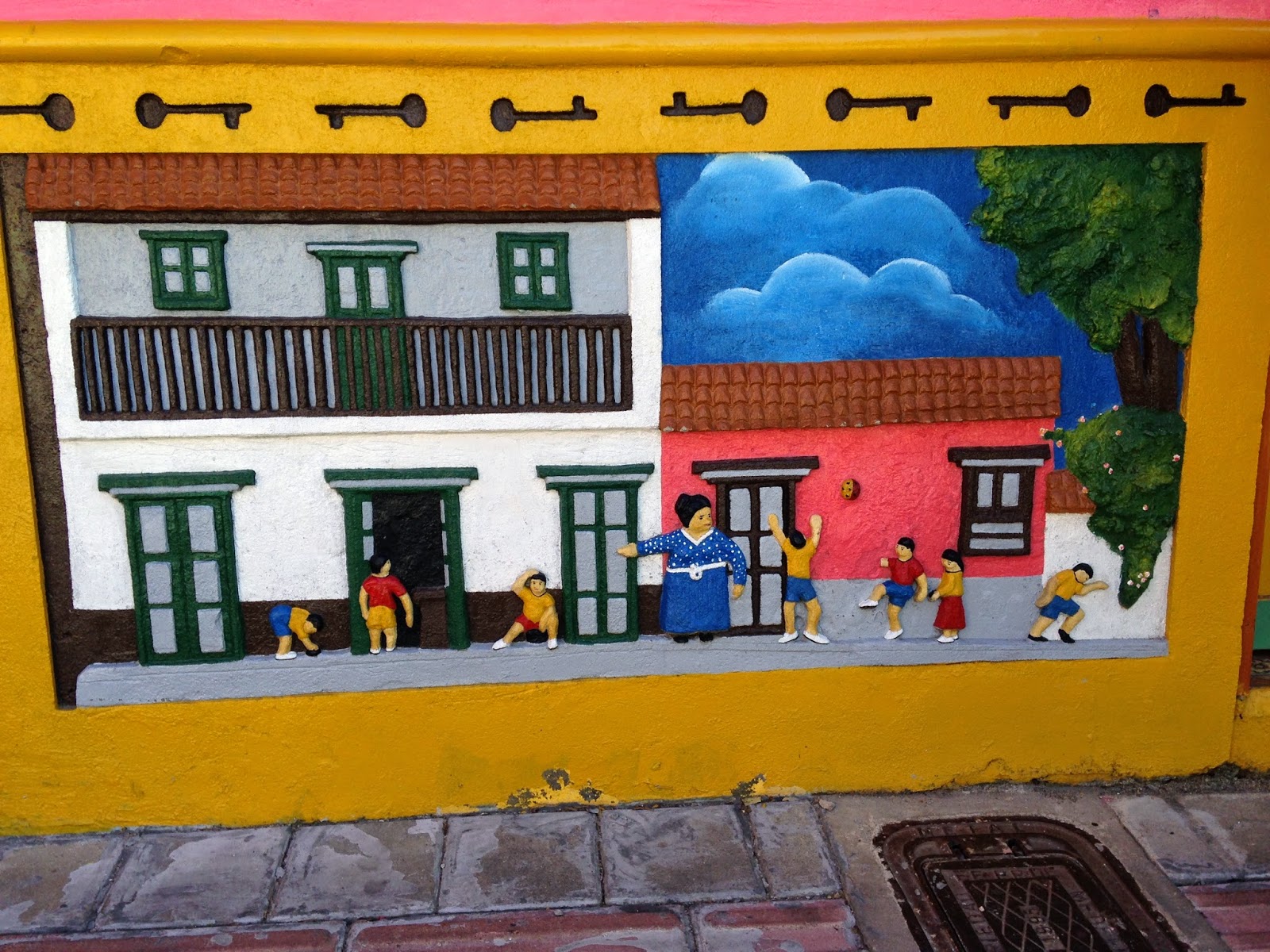 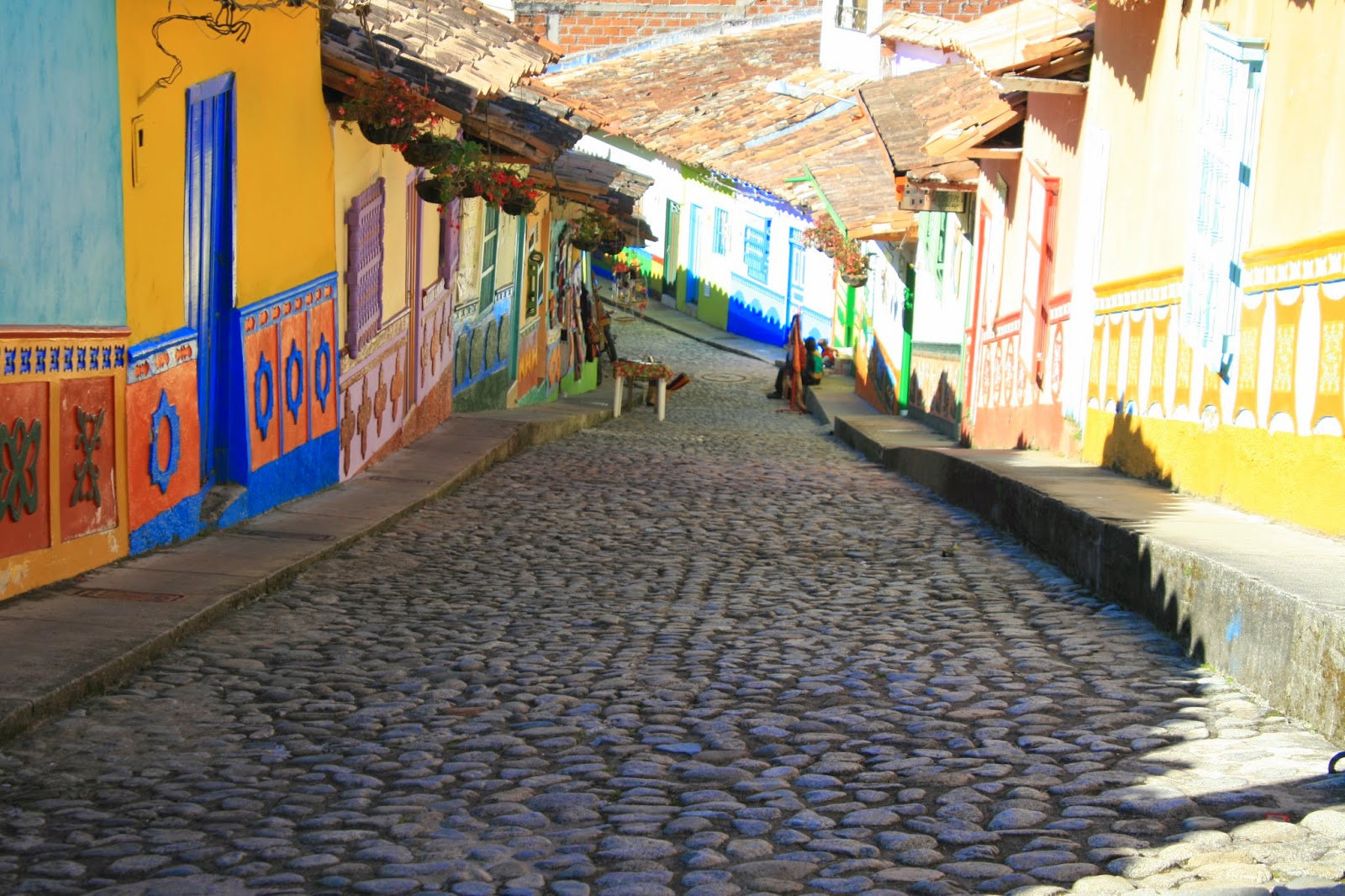 Some practicalities
Buses leave the northern bus terminal in Medellín heading to Guatapé around every 20 minutes and it takes around 2 hours to get there.

Get off the bus at the road leading to the foot of La Piedra - its around a 10-15 minute walk to the bottom of the steps.

We got a boat from road leading up to La Piedra, but its also possible to get on a boat from Guatapé itself, which is right beside the lake.