Out and about in Medellín

Once home to the brutal drug lord, Pablo Escobar, and known as the most dangerous city in the world, Medellín has really cleaned up its act in the last 5 to 10 years.

In 2013, it was named the most innovative city in the world in recognition of its remarkable turnaround, notably through regeneration projects, such as the building of cable cars to improve transport links up and down the mountains.


For visitors, the city doesn't have many obvious big hitting sights, but it is an interesting modern city, with a good night life and a fascinating past.

So what is there to see and do while you're there?

NB: The accent in Medellin (the Paisa accent) means that the double 'l' in Medellín is pronounced as a j/sh sound and not as a ye as most Spanish speakers would have it. Listen here for the proper pronunciation.

1. Wander the streets of downtown Medellín
On our first day in Medellín, we took a free walking tour around the city centre. The guide had grown up in the city and had a really good knowledge of complex Colombian and Medellin history - including lots of little local stories that you wouldn't find in the history books.

It was particularly interesting to hear from her about how the places we were walking through would have been complete no-go areas when she was growing up in the 80s and 90s.

I was also really struck by the story of a bomb that had gone off at an outside concert space killing a number of young people, who were out enjoying themselves. The bomb put a hole through one of the statues by the world renowned local artist, Fernando Botero. 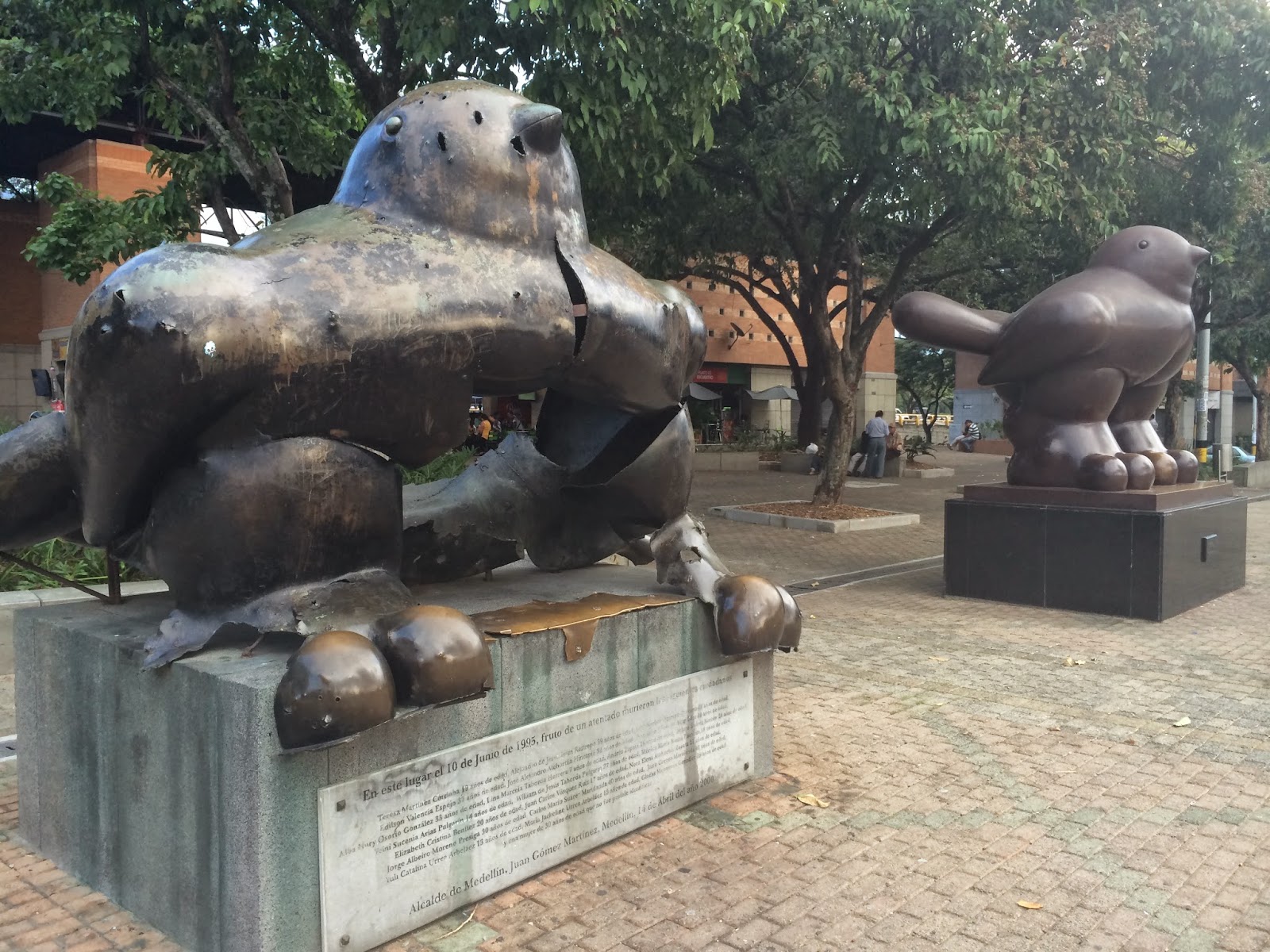 2. Botero Museum and statues
We walked past the Museo de Antioquia on our walking tour. The square outside - known as Plaza Botero - is full of Botero statues, which according to the artist are 'not fat, but voluminous'.

We enjoyed having a look at the statues and then returned another day to see the museum's collection of his work.

We got ourselves an audio-guide, which was worth it to get the back story to his paintings and sculptures. I was particularly struck by the painting of his four year old son that he painted shortly after the boy had been killed in a road accident.

Botero also painted a depiction of the death of Medellin's infamous druglord, Pablo Escobar, on a Medellín rooftop, which is also in the museum and worth a look.

We had a look at other collections in the museum, but I have to say that the Botero section was by far the most interesting and enjoyable.

3. Volunteering with the Angeles de Medellín

I've written about our time with Marcos and the Angeles in another post. Suffice to say here that however long you're staying in the city, it's worth making the time to get up the mountain and help out for as much time as you can. Marcos is always looking for new volunteers!

4. Touring the fruit market
The fruit in Colombia is something special. There are so many different exotic varieties, the likes of which are very hard to find elsewhere.


We tried a few we fancied from just picking them out in the supermarket, but it wasn't clear how we were supposed to eat some of the weirder looking ones.


One of the other volunteers with the Angeles recommended a fruit tour of one of the markets with Real City Tours (who also took us on the walking tour). I wrote about the fruit tour as a guest blog for Indefinite Adventure.

5. Day trip to Guatapé
A bus ride out of Medellín will take you to any one of a number of picturesque Colombian villages or pueblos that are dotted around the countryside.

We only managed a day trip to Guatapé which - with good reason - is the most popular day trip from Medellín.  The town itself is beautiful and full of colour.

Meanwhile, the view from the top of the nearby La Piedra de Peñol - a strange rock formation, 200 metres high - is incredible.

If you have more time, it's worth considering exploring some of the other pueblos. See Medellín Living for some inspiration.

6. Recreated 'pueblo' in town
If you don't get a chance to get out to one of the pueblos, you can get a flavour of what they are like by visiting the mock pueblo on top of Cerro Nutibara - a hill located in central part of the Medellín valley.

The layout of the mock village matches that of those in the surrounding area. Restaurants up here serve up hearty traditional fare, while the gift shops sell traditional souvenir tat! There are also fantastic views of the city and so its worth a look if only for the view.


We got a taxi to the top, but decided to walk down. There were huge stone slides on the way down, which made the walk a bit easier and a lot more fun!

7. Hanging out in El Poblado
Most travellers visiting Medellín will head to El Poblado - an upmarket neighbourhood, where most of the backpacker accommodation is located.

It's also a great area for going out in the evening. Either buy your drinks in one of the corner shops and find yourself a spot with the locals in the centre of Parque Lleras. Or take your pick of one of the many bars, restaurants or clubs that line the streets around Parque Lleras and beyond.

Sunday morning in El Poblado is also a hive of activity. There is a farmer's market at the Parque Lineal La Presidenta until 1pm. On my visit, I picked up a tasty arepa for lunch, which I ate while listening to the live band that were playing.

The main road alongside the park closes to cars on a Sunday morning, allowing for joggers, cyclists and in-line skaters to enjoy the use of it for their Sunday constitutional. It seemed like a great idea and was very well used.

The Parque Lineal La Presidenta also hosts a monthly aperitif and tapas evening, which seemed to be largely run by French expats. We had a lovely evening with them sipping wine and munching on empanadas.

8. Going up the cable car to Parque Arvi
While in Medellín, we had been heading up one cable car every day for our volunteer work (from Acevedo to Santo Domingo).

However, we hadn't followed the other tourists up the second cable car that takes you all the way to top and to the Parque Arvi. This was something we decided to do on our last day in the city.


While the views on the way up were spectacular, and it was great to see how the city and then the ramshackle huts gave way to forests and greenery, I can't say I was particularly impressed with what we found once we got there.


We were taken on a free guided walk, but didn't really get to see anything. We went down some trails that I am sure we could have found ourselves and kept appearing back on the road.

Our guide was more interested in chatting about the differences between different cultures, than sharing insights about the surrounding countryside. She was nice, but the short walk was a bit of a waste of time to be honest. I think that there's an element of pot luck depending on the guide you get, but there really didn't seem to be much to see in this section of the park.

There is another area of the park that's a 15 minute bus ride from the cable car. You have to pay to get into this section of the park. In retrospect, I think we should have investigated this further.

Our advice? If you're heading up to the top of the cable car, either stay on and enjoy the ride there and back or consider going to the paid section of the park.

Have you been to Medellín? What did you get up to while you were there? What did we miss?