San Pedro de Atacama is really cute and chilled out little town in the middle of the driest desert in the world. It is now largely centred on tourism, but this hasn’t ruined its small town outpost feel.

It is very wild west and you could easily imagine cowboys riding into town to challenge each other to a duel. Happily, this doesn’t actually happen … or at least it didn’t while we were there!

It’s a nice place to hang out for a few days, go on a few tours in the surrounding desert and chill with a beer in town. We really liked it, but we were also very happy when we finally left – I’ll explain why in a future post!

Fresh from the salt flats tour, we arrived into town at lunch time and used the afternoon to get clean (!), relax, eat and get some laundry done, before heading for a few drinks in town with Ben (who we met on the salt flats tour) and a British couple from our hostel. We found a nice little bar in town complete with swinging saloon doors, with a good selection of beer!

Up the next day, we started to plan our activities for the next few days. There are lots of things to do in the area around San Pedro, from sandboarding to stargazing and lots of tour companies in town to choose from (apart from the star-gazing tour, they all seemed to offer the same thing for around the same price).

So what did we get up to while we were in San Pedro?

1.  Visit to the Pukará de Quitor fort. The fort is just 3 kilometres out of town, so we hired bikes to cycle out there. It was a very easy ride - its very flat and well signposted. At the site you can walk up to a viewpoint or explore the ruins of the fort.

We decided to walk up to the viewpoint, where we were rewarded with beautiful views of the Valle de la Muerte, as well as the volcano that overlooks all of San Pedro, Licanbur, before heading back to town to pick up Ben and cycle to the Valle de la Luna for sunset.

(N.B if you are doing this on bikes or on foot, when you get to the ford look to your left and you will see a bridge! You do not need to cycle (or walk) through the river!)

2. Sunset visit to Valle de la Luna. The ride out to the park was fairly straightforward. We were given a map at the entrance to the park and headed first to the cave and gorge that were pointed out to us by the park staff, for a bit of an explore.

We then headed further into the park, up quite a tiring climb (where blaming the altitude, we all had to get off and push for a bit) with the intention of cycling to 'the ampitheatre'. 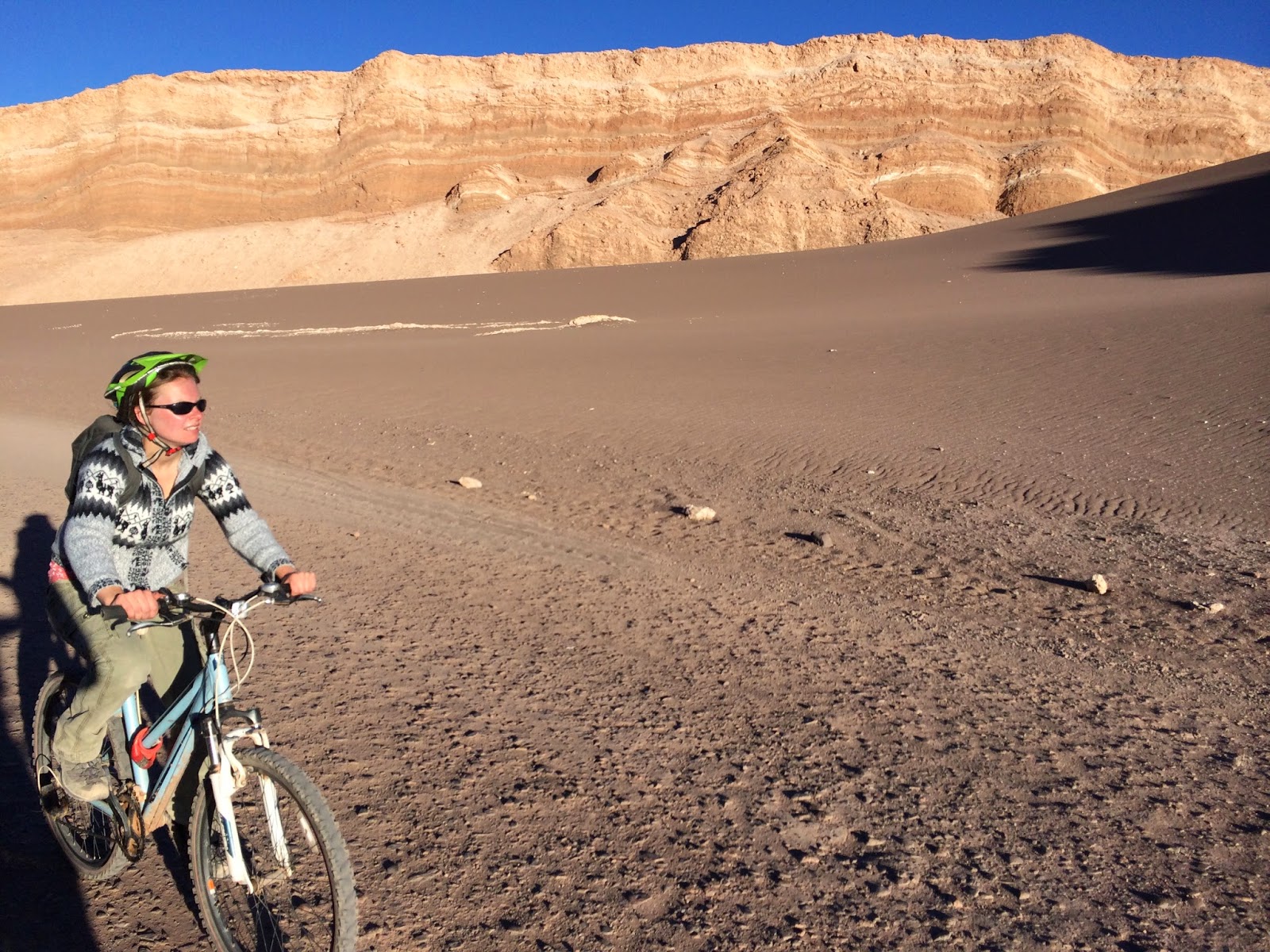 However, after cycling a short distance past the sand dune that is known as a good sunset watching spot, we realised we didn't quite have enough time to make it to the ampitheatre and back again in time for sunset. So we turned back, parked up the bikes and walked to the top of the sand dune and were treated to a beautiful view. 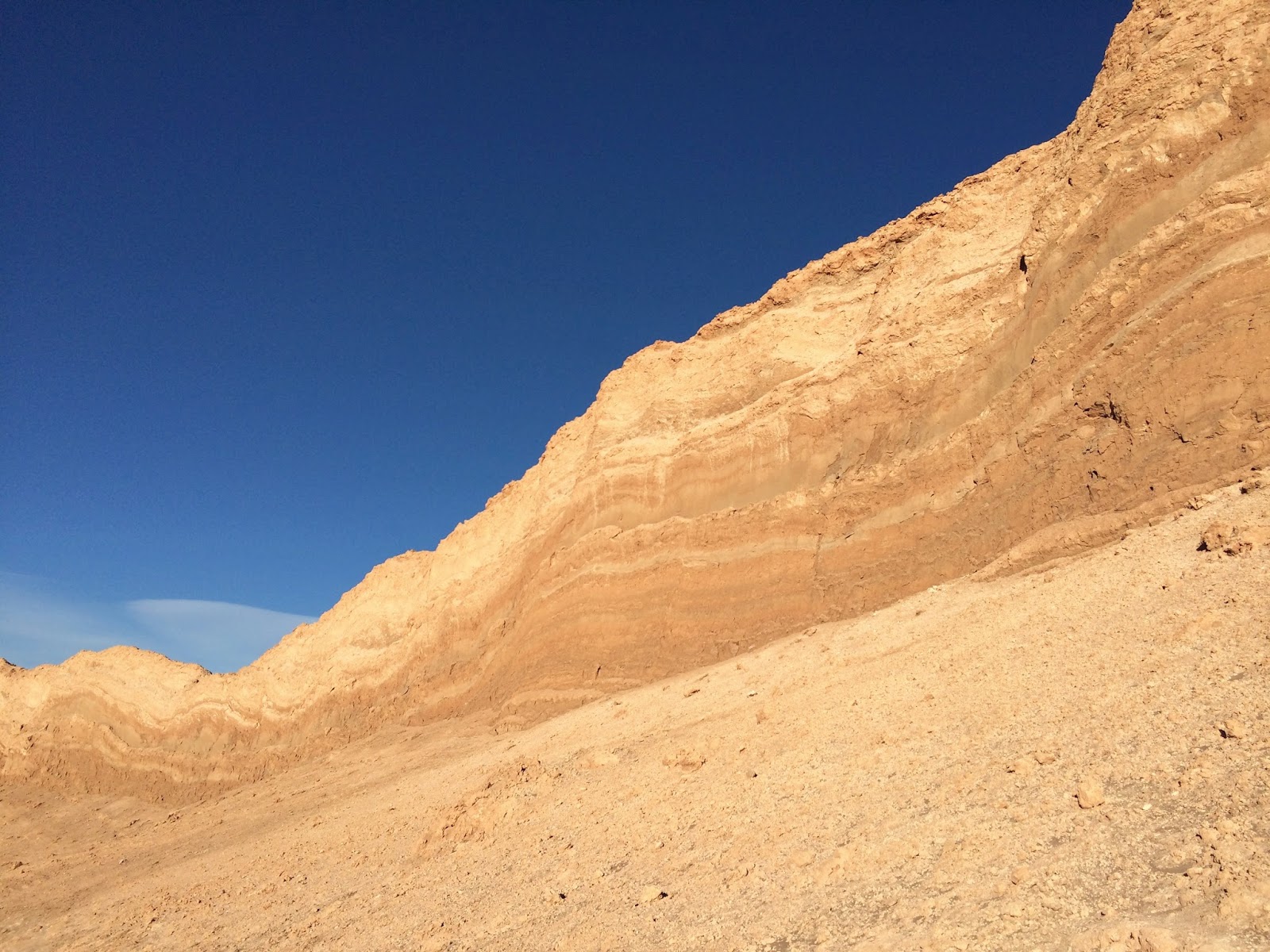 Oddly, it is not the sun setting itself that is pretty here, but the changing light on the volcano and the mountains in the other direction.

Our ride back into town was a little sketchy, due to our badly operating torches! We made it back in one piece though, just!!

Trips to El Tatio typically leave San Pedro at 5 in the morning, so that you arrive at the park as the sun rises. The hot steam from the geysers is more impressive and shows up more in the morning when it is cold. And my was it cold! It was about minus 9! Everyone told us we would be cold on the salt flats tour, but we were definitely colder on our visit to El Tatio! 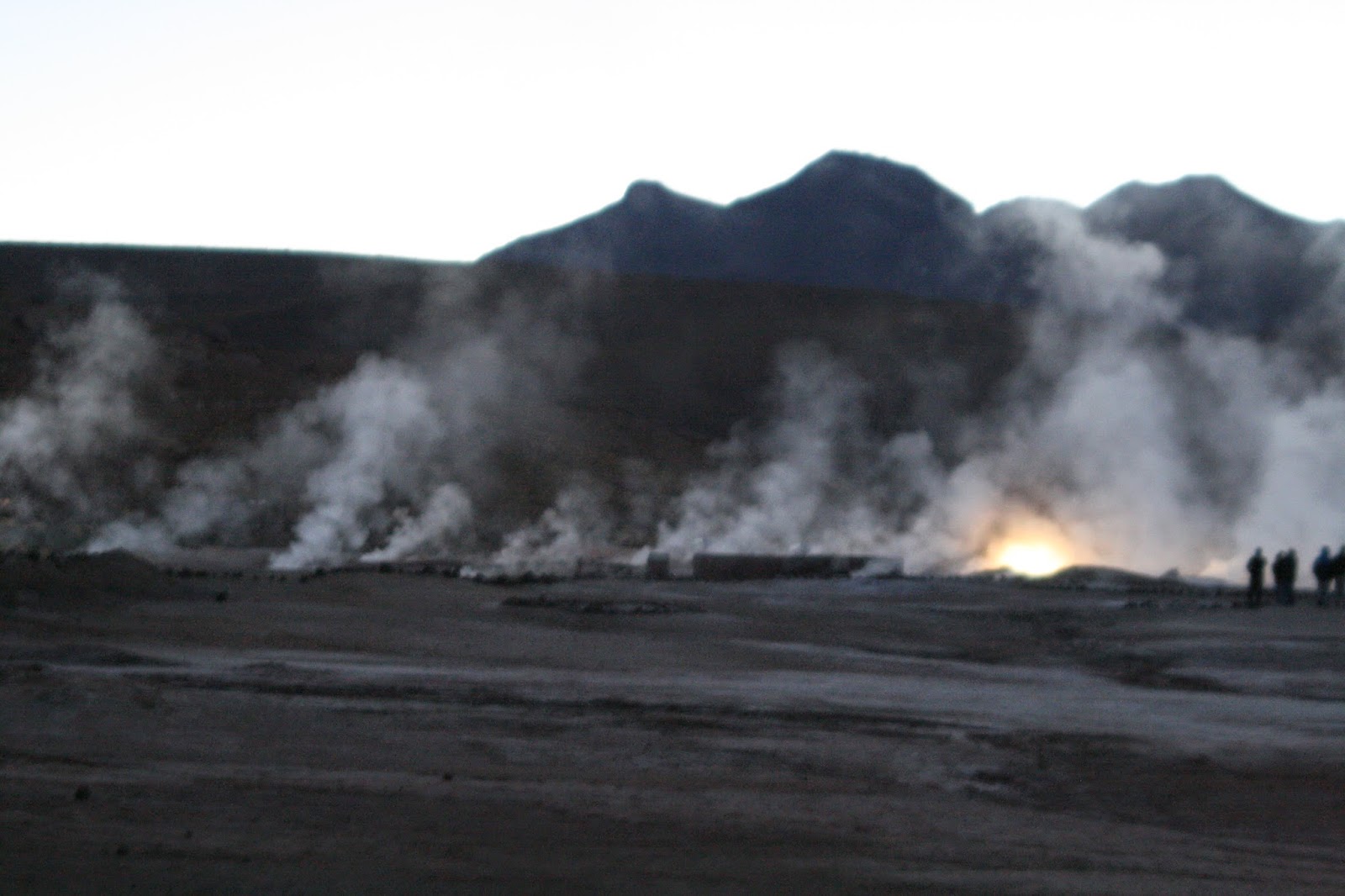 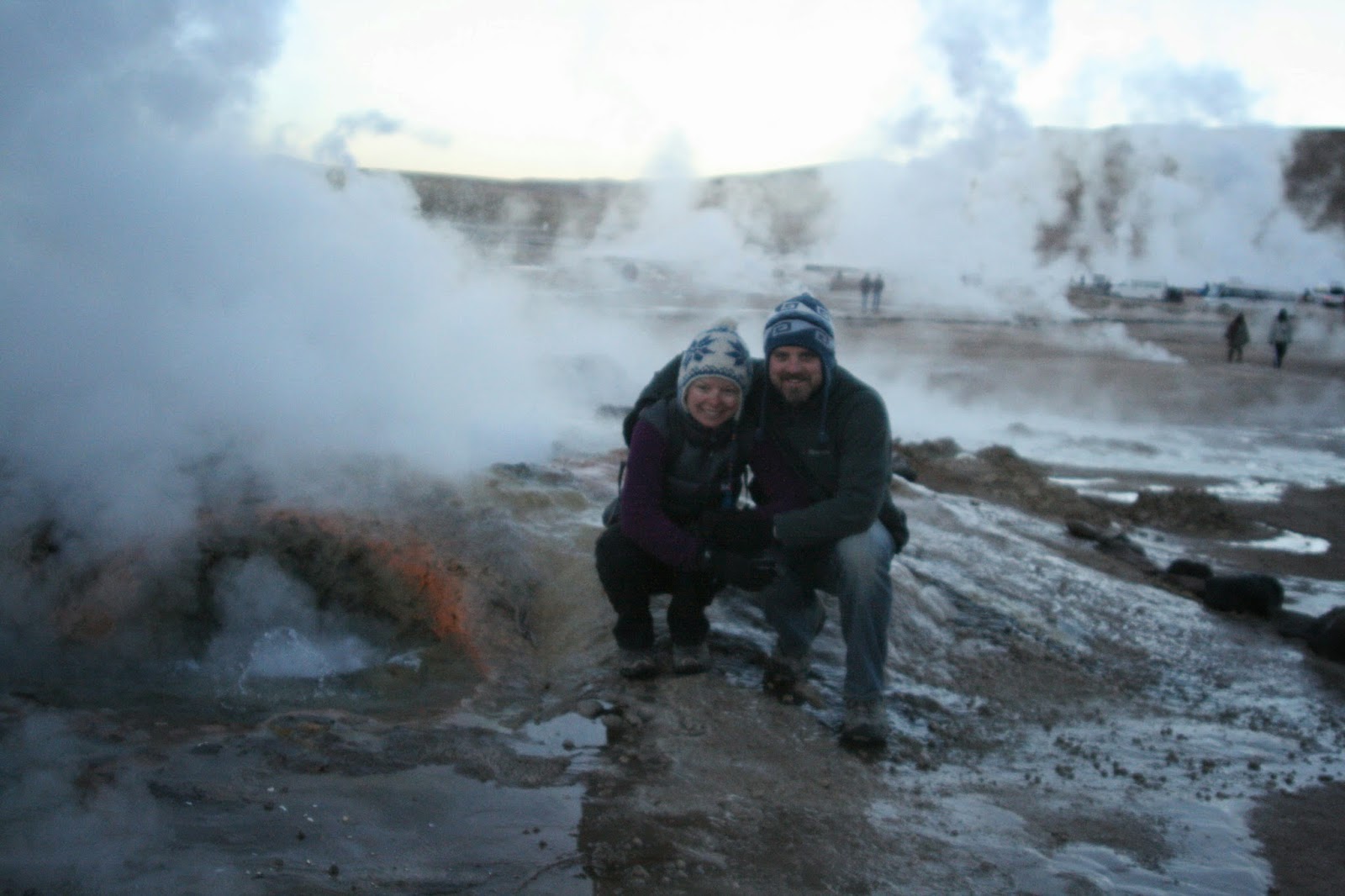 The geyser field is in the crater of a volcano and there are over 80 geysers. It was an impressive sight. 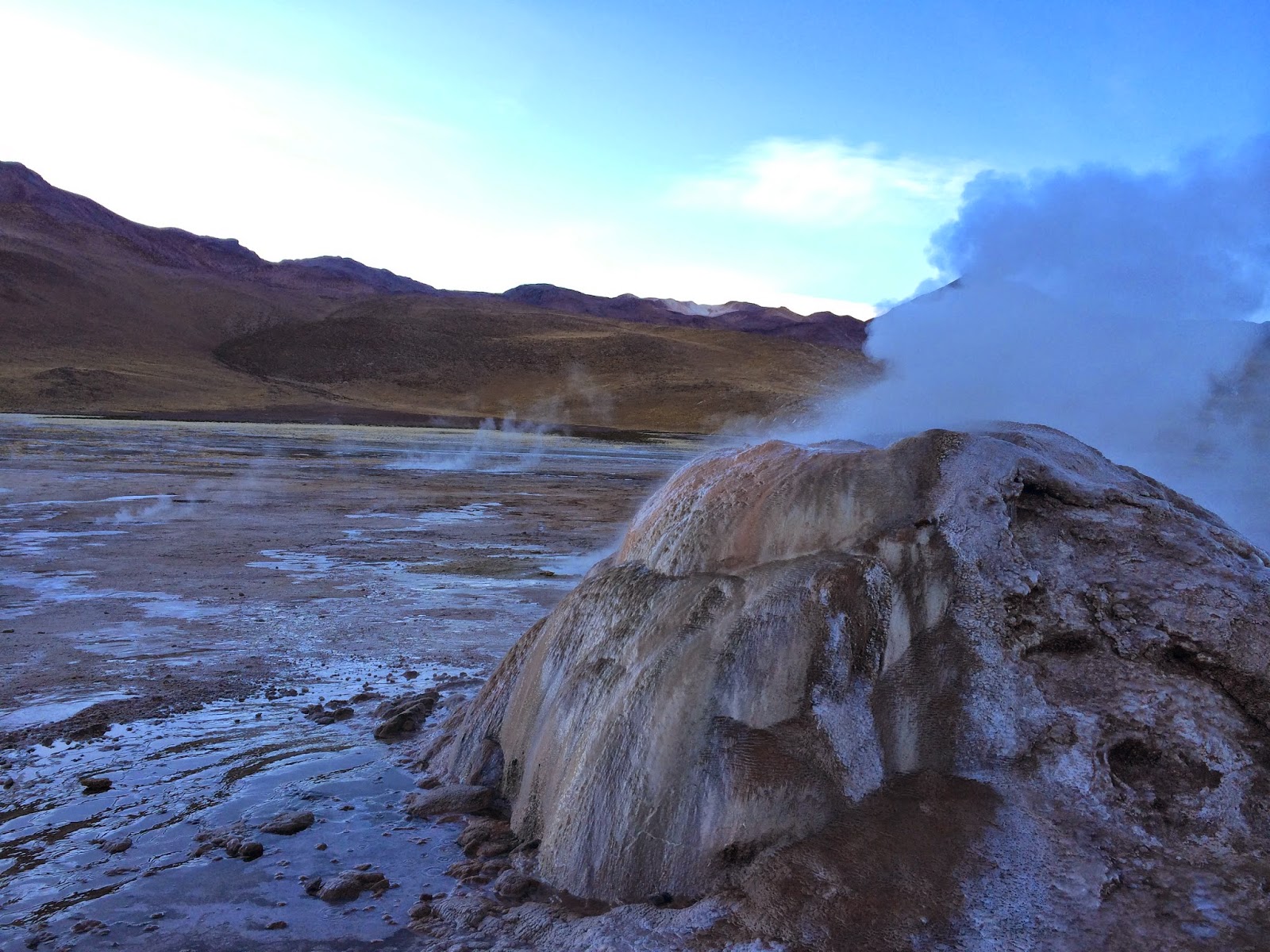 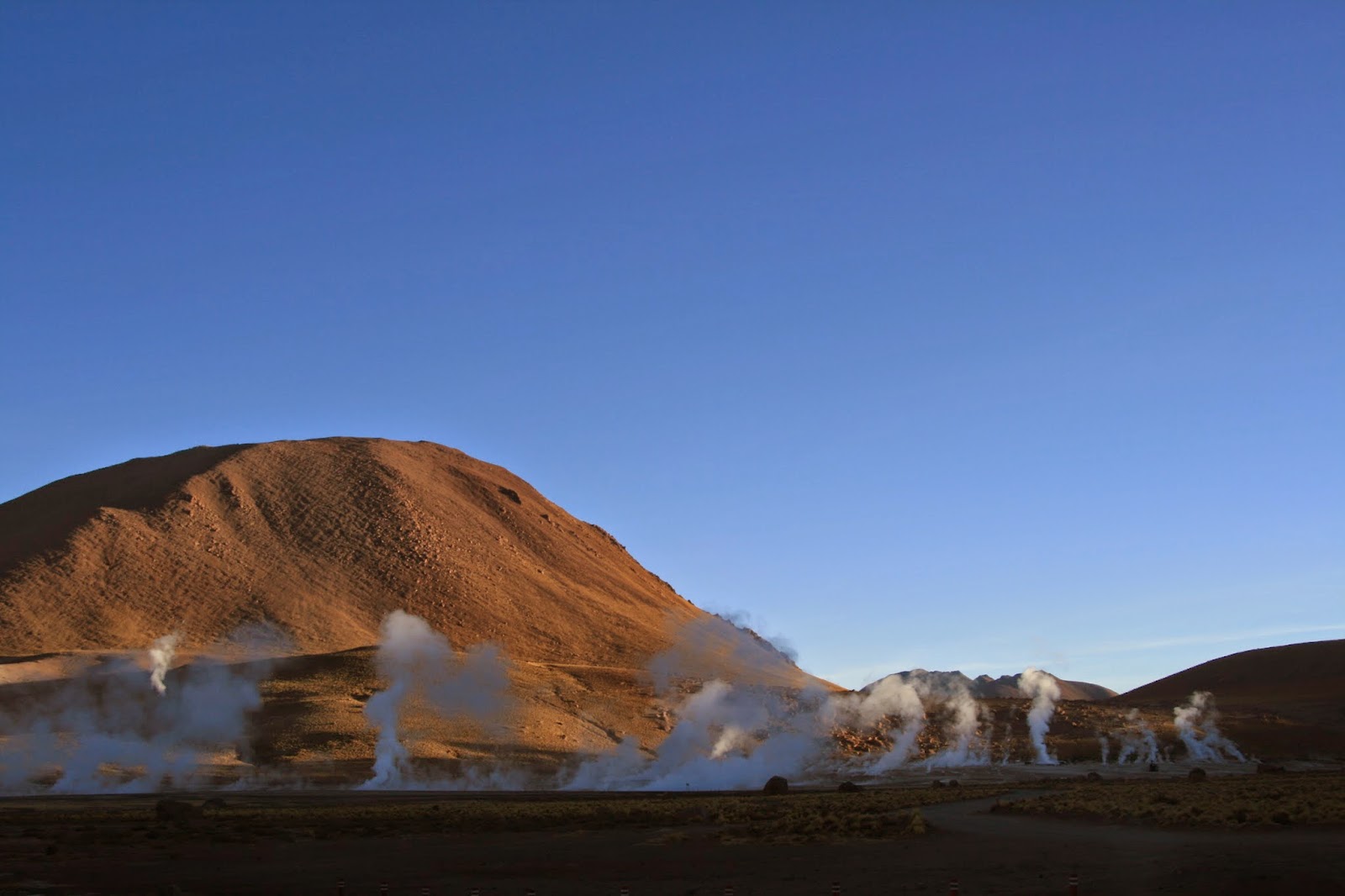 After wandering around and snapping lots of pictures of bubbling pots of water, there was an opportunity to climb in one of them! However, the hot spring at El Tatio was not as hot as we'd hoped, apart from in one corner, in true Goldilocks style is became a little too hot. 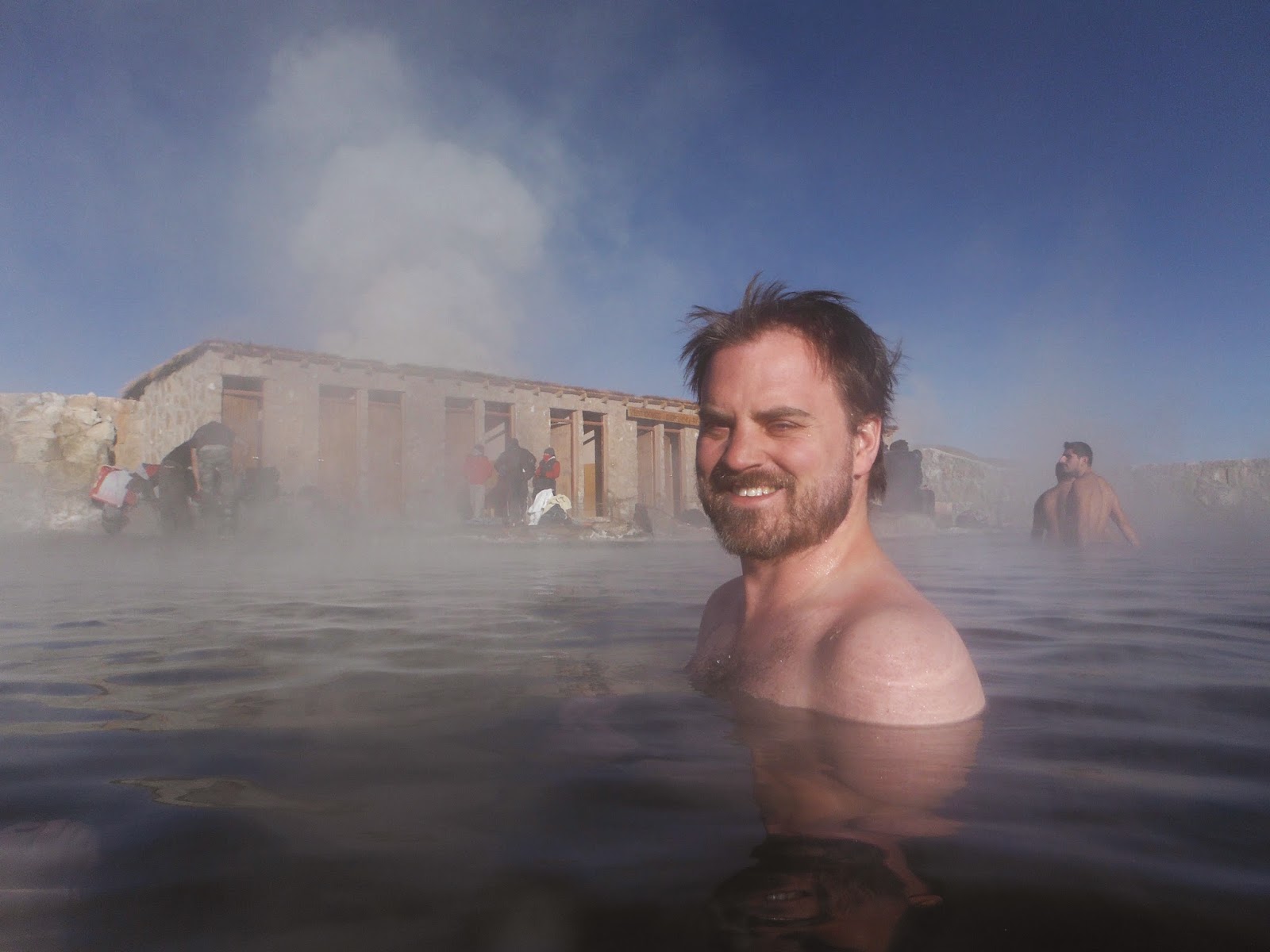 On the journey back to San Pedro, our bus stopped several times so we could see the local wildlife. And we finally managed to get a good photo of a vicuna - an animal from the lama/alpaca family. 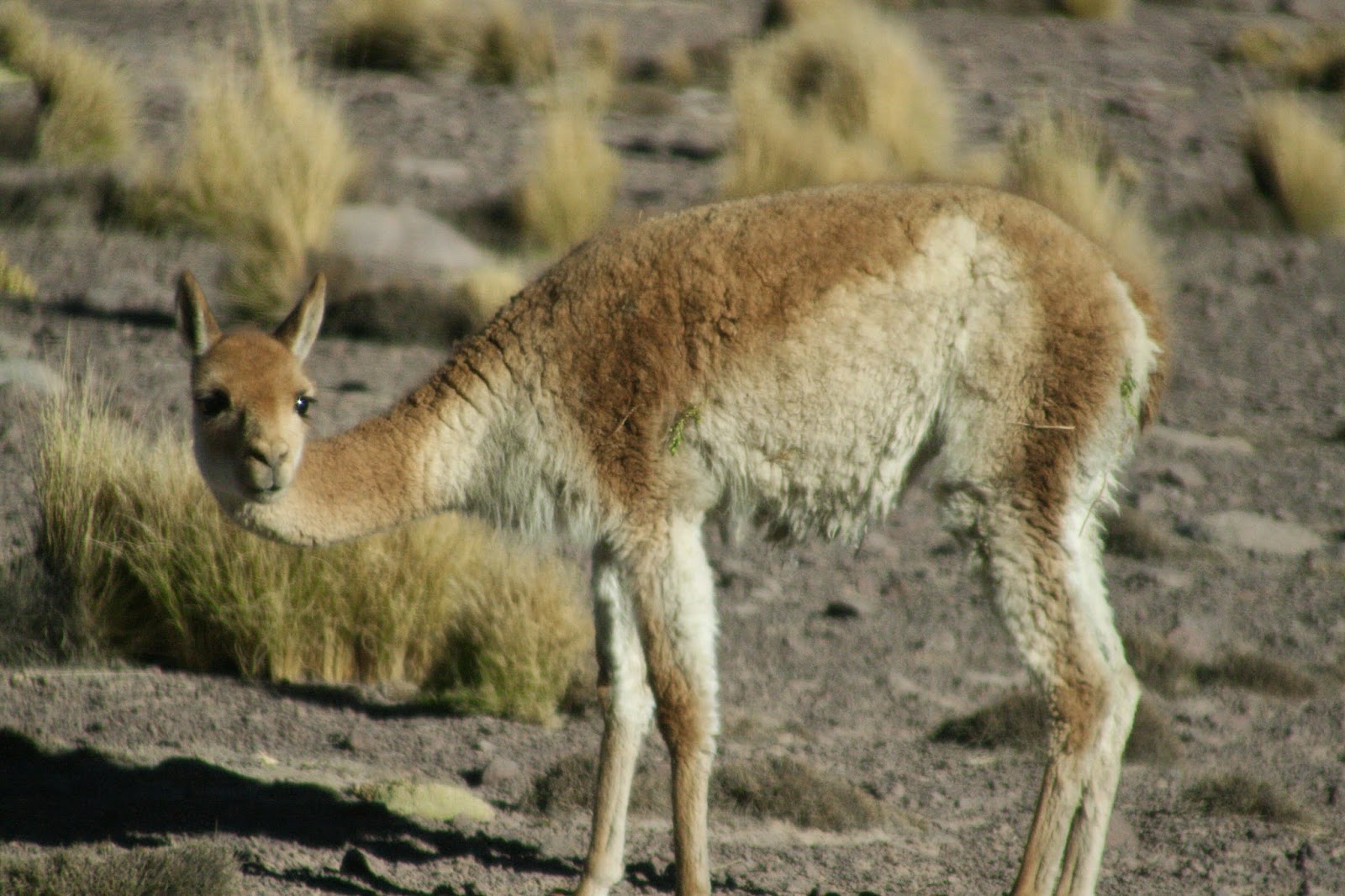 4. Trying to go stargazing! San Pedro de Atacama is one of the best places in the world for stargazing because of its high altitude, low-zero light pollution, its dry environment and its supposedly clear skies. Unfortunately, we were very unlucky with the weather and had our trip cancelled three nights in a row, because of cloud cover!

We comforted ourselves with thinking about the amazing skies we had seen on the salt flats tour and a promise to return. From researching the options for stargazing trips, the best agency - and the one we tried to go with (!) - seemed to be Space Star Tours, who have an office on Caracoles, the main drag in San Pedro.

5. Eating (and drinking)! Chile does the biggest empanadas in South America. Here's a tasty cheese, tomato and basil treat, bought from one of the shops on the main street.

Like Peru, Chile also makes pisco. In fact, there is an ongoing rivalry about who does the best Pisco Sour. I think Peru might just have the edge, but we were pleased to have found pisco again.
We also sampled some different types of beers, including a michelada, a beer mixed with lime, salt and various spices. 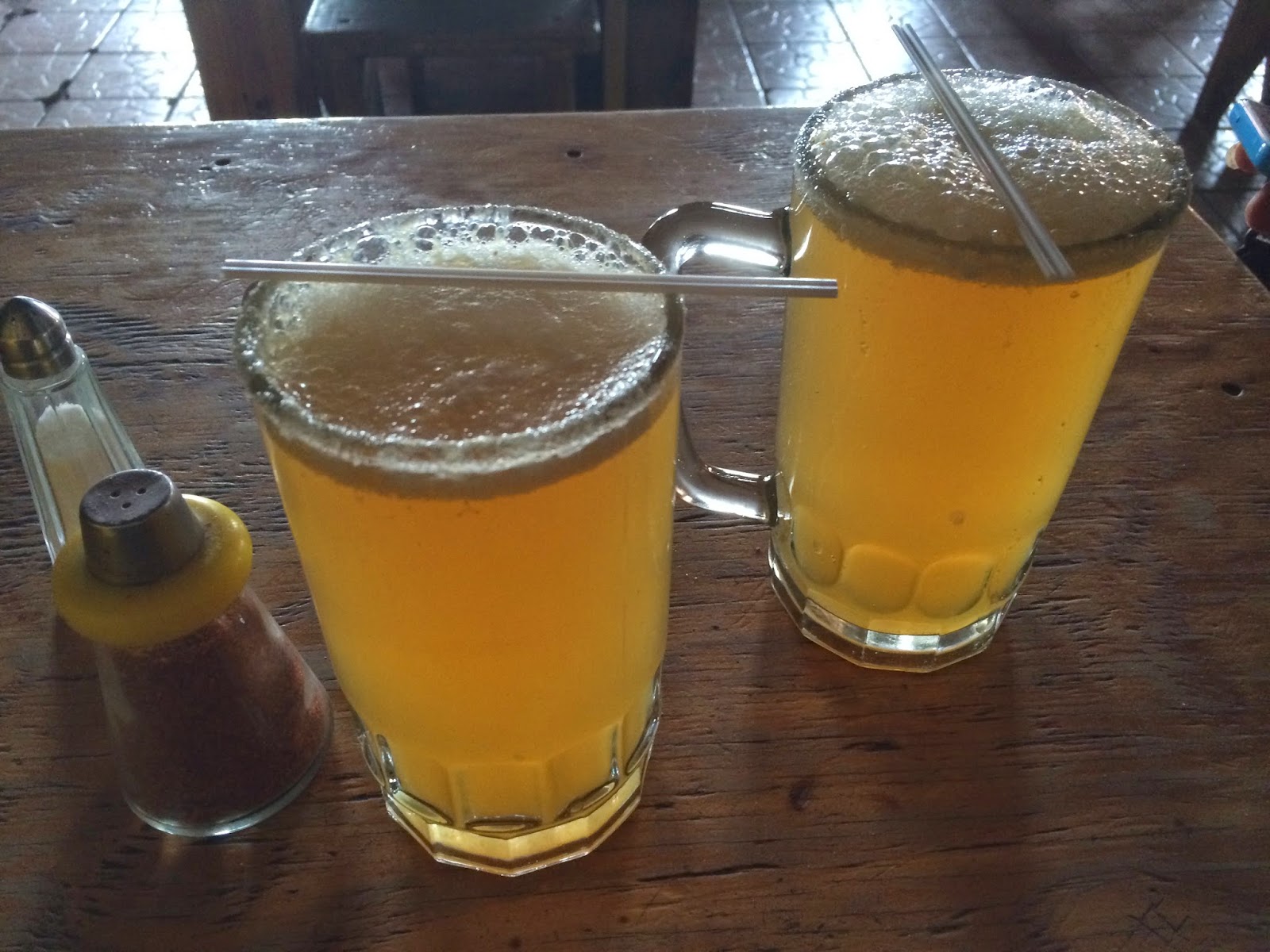 Also as you might expect from a tourist town, there are also quite a lot of restaurants to choose from in San Pedro and the great thing for me was that most restaurants had at least one veggie option.