Being vegetarian in Bolivia

We’d been told in Peru from travellers coming north that Bolivian food was rather underwhelming and that there was little choice for vegetarians. I’d had quite an easy time in Peru and so was bracing myself for a month or so of nothing but rice and omelettes.

However, while it was true that Bolivia is less foodie than Peru, there were some good veggie options and I only ate about two omelettes in almost two months. (And they were nice omelettes.)

We did have more time to cook for ourselves, so that helped, but even in our homestay, the family didn’t seem to have too much trouble cooking vegetarian.

And there were some great veggie options both at the street stands street and in the restaurants, particularly in Sucre.

So what did we eat and where?

Copacabana and the Isla del Sol: We’d been recommended Las Velas (The Candles) on the Isla del Sol and were not disappointed. This place was great. We followed the signs from the main path through the woods and arrived in time to have a beer outside as the sun went down, before heading indoors for dinner.

There is no electricity and so you eat by candle light, making the whole place very homely and atmospheric. The menu is changed regularly, depending on the ingredients they have available and although it’s a bit more expensive than the other restaurants on the island, it felt worth it. I had a very tasty vegetable cannelloni, washed down with some wine. There were also pizza and other pasta options. Another veggie traveller reported that the pizza was the best they'd had in South America. For pescatarians, James had the trout, which he reported to be very fresh and delicious.

The restaurant can be found relatively easily if your keep your eyes peeled for the sign on the main street/path in Yumani in the south of the island. Take a torch as you have to walk through a wooded area to get there and its very dark as soon as the sun goes down.

Options in Copacabana itself were less inspiring, but there were veggie choices on most menus. And for home cooks, the small market had a good range of fruit and vegetables.

La Paz: As is to be expected La Paz had a wide variety of restaurants, including lots of international options.

As curry buffs, we were disappointed with the Star of India curry house, which was apparently British owned, but just didn’t quite hit the spot. It was OK and the food filled us up but it didn’t have anything on Korma Sutra in Cusco.

Thanks to Happy Cow, we also found a a great vegetarian restaurant, called Namas Te which serves delicious and good value lunches to locals and foreigners alike. (NB It is not open for dinner).

For more traditional local food, I enjoyed some very tasty quinoa soups, which are available pretty much everywhere.


However, like in Peru, what we really enjoyed in La Paz was trying out the street food. We tucked into delicious tucumanas, mostly stuffed with egg (they also come with meat) and enjoyed standing round the tucumana stand with the locals, sampling the different types of sauce.

Sucre: There are lots of options for vegetarians in Sucre, but our favourite place to go was Monte Rosso, an Italian run pasta place that served 3 course meals, with plenty of veggie options (and the biggest slice of tiramisu for desert) for around 70 bolivianos (£7).

It is a litte bit of a tricky place to find as it’s on a very residential street, with only a very small sign outside to indicate that it is there. It’s only open Tuesday-Saturday.

For lunch, we also enjoyed stuffing ourselves at Condor Cafe, a very good value veggie cafe on one of the main streets in Sucre. Although the service could be a little slow at times, the staff are very warm and welcoming and the food delicious.

Sucre Life also has a very good overview of veggie friendly options. Although, looking at their list I would warn that although I found something to eat there and the wine was great, La Taverna really wasn’t great for veggies (it is French after all!). Also, I found chicken in my veggie soup in Origines, so you might just want to check what's in each course, if you're eating there.

We also made a habit of heading to Simon Bolivar park for papas rellenas (filled potato) for lunch. The cheese ones were particularly tasty and for just 3 bolivianos (about 30 pence or 50 cents), you can’t really go wrong. You have to elbow your way past all the schoolchildren to get to get served though!

If you're self-catering, the mercado central in Sucre is well stocked and like most markets in South America is a great place to stop by for some delicious fruit juices. 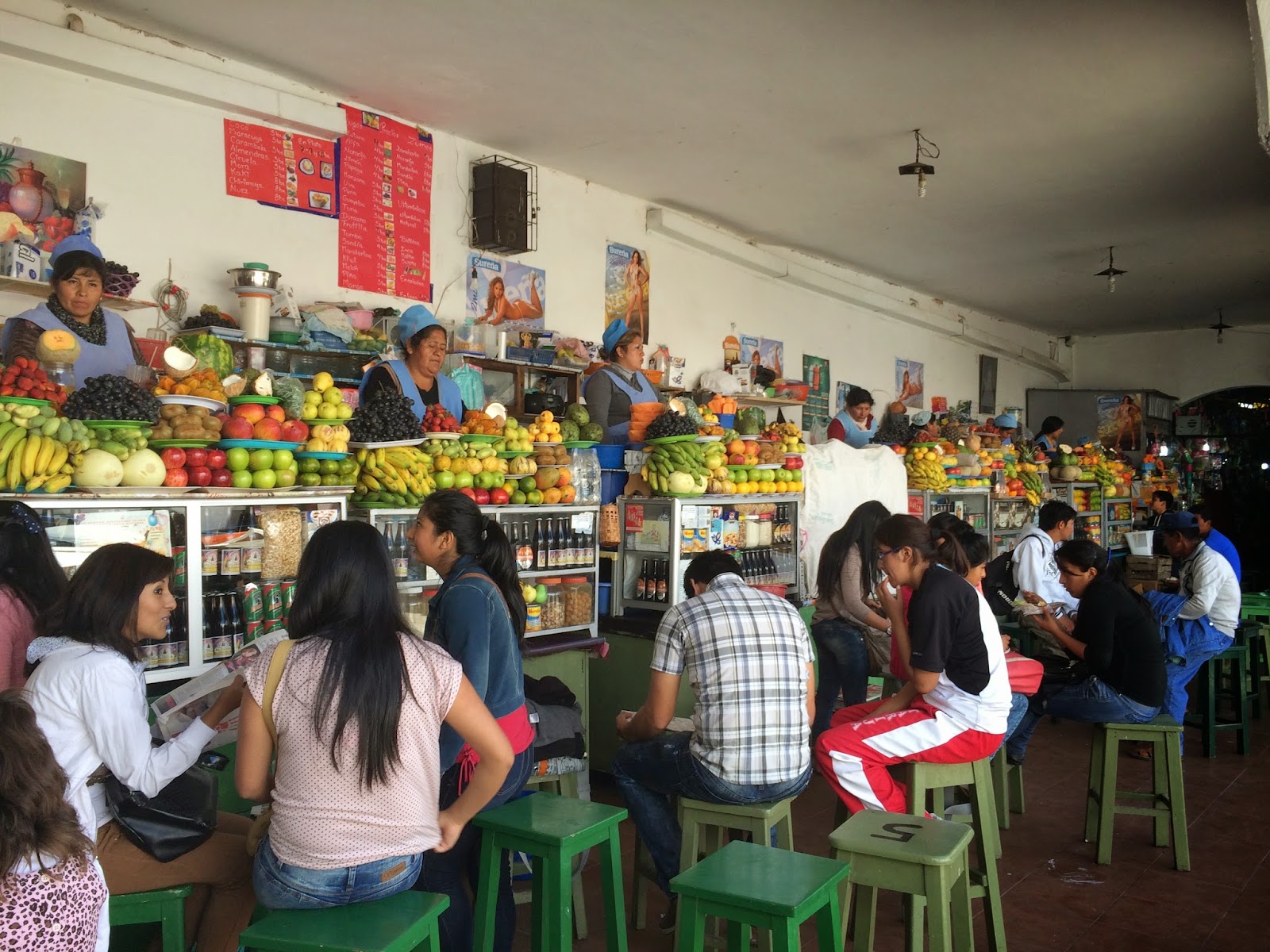 Uyuni: Uyuni only seems to serve pizza and somehow we got sick after a pizza dinner there, so I don't have a lot to recommend about Uyuni. It is not a place for gastronomic delights! But, as you’ll hopefully only be passing through on yoru way out to the salt flats, this shouldn’t cause you too much trouble!

Tours: we took a couple of tours during our time in Bolivia and as long as they were pre-warned all were used to serving vegetarian fare, even if at times it wasn’t particularly exciting!


You might also be interested in: Being vegetarian in Peru and Where we stayed in Bolivia
Posted by Sarah at 21:19