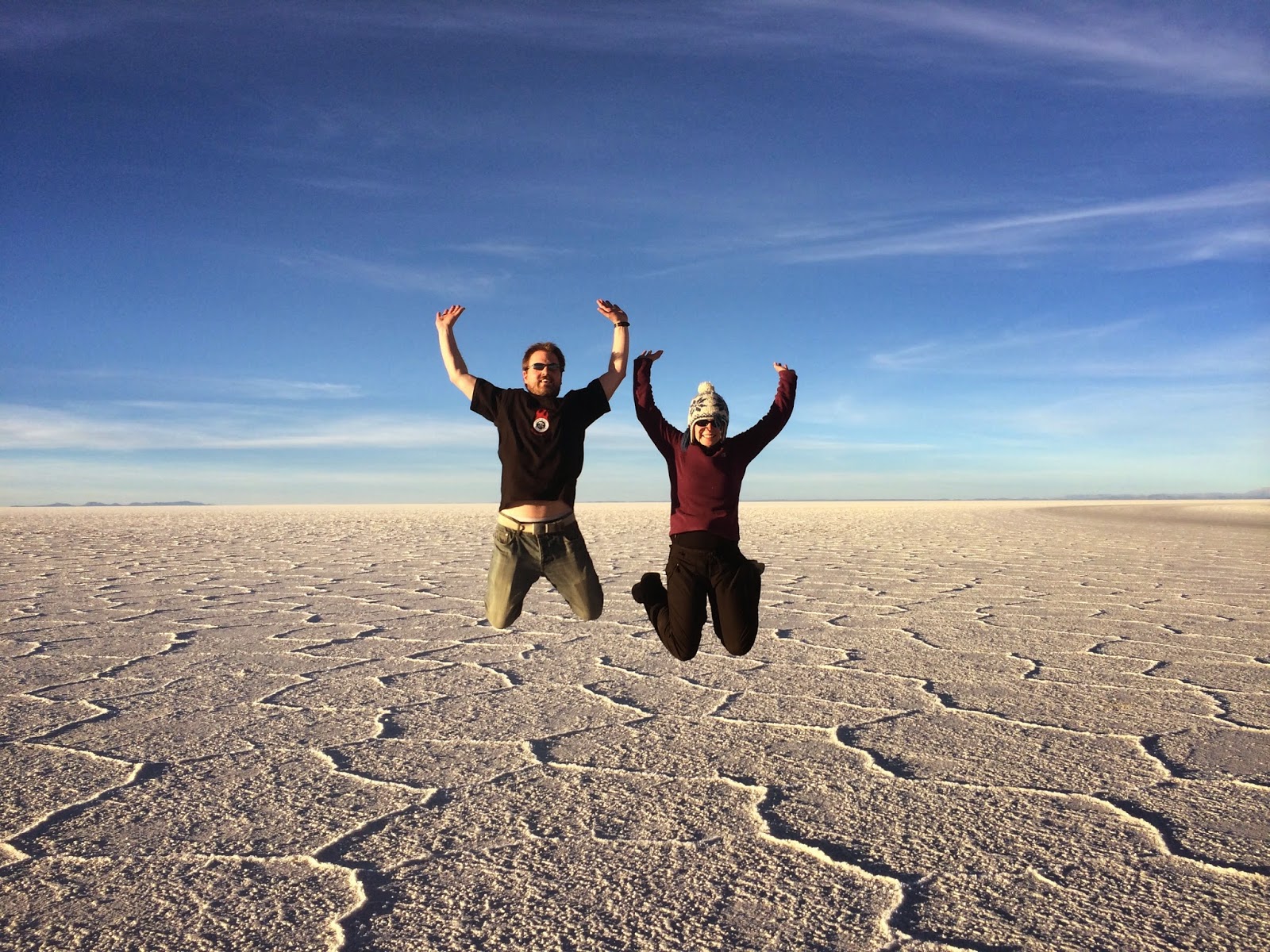 Our trip to Bolivia’s salt flats and other worldly landscapes of the country’s southwest was somewhat cursed from the start. First off we missed the bus that we had intended to take to Uyuni (where most tours to the salt flats start), as we struggled to find a taxi and then the police decided to check our taxi drivers papers. We arrived at the bus station, just as the very full bus was leaving. This was not too much of a problem as there was another bus in an hour, but if only we’d known it was a sign of things to come!

On arrival at the dusty outpost of Uyuni, we found our way to the Red Planet offices. This agency had come highly recommended from other travellers and there were so many other reports of drivers getting drunk, iPhones being stolen, 4x4s breaking down that although we knew it would be a little more expensive, we decided it would be worth it, given the harsh environment we were going into.

Unsurprisingly for 6pm in the evening the most popular tour company was booked for the next day, so we booked in for the day after and went to find lodgings for the next two nights.


The following day went pretty smoothly, we wandered round the town, bought some coca leaves (to help with the altitude), snacks and props for our salt flats pictures and then headed for dinner at the ‘best pizza place in all of Uyuni’. This was at a marginally expensive hotel, so we chose it on the basis that it would a) be warm (our hotel had no heating and it was pretty cold) and b) have decent wifi (which was even scarcer in Uyuni than in the rest of Bolivia).

We were right. It was warm. The wifi was good and the pizza was yummy. Unfortunately just a few hours later, we both got to see our pizzas all over again as we were both struck down with the same illness that kept us up most of the night. We felt terrible.

The next day, I shuffled to the Red Planet office to ask if we could delay our trip by a day. They were great about it and booked us in for the next day.

However, there were more problems to come! As we arrived, somewhat recovered, at the agency on the following day, our guide informed us that the rest of our group hadn’t yet managed to arrive and so we would start without out them and meet them for lunch in the town of Colchani after visiting the train graveyard.

We watched as the other (full) group headed off and then we followed shortly after and arrived at the train graveyard for a play around on the old trains.


We then headed to Colchani. Our guide said the rest of the group would be about 30 minutes, so we had time to look around the (very small) market. Over an hour later and they still hadn’t arrived. Meanwhile, we watched as the other Red Planet Group headed off into the salt flats. We ate lunch walked around a bit more. Eventually, 7 out of the 9 people who were supposed to join us came along. An Australian called Ben joined us in our jeep and the other 6, who were all travelling together went in another car.

Their bus from La Paz had broken down less than halfway on the way to Uyuni. The replacement bus abandoned them in the middle of nowhere, from where they were transported in small groups down to Uyuni in jeeps. We waited a little longer for the final two to arrive, but it was getting so late that we had to leave without them.

So two hours after we were supposed to drive into the salt flats we finally headed off! Our first stop in was at the edge of the salt flats, where we could see the salt scraped up into mounds for harvesting. 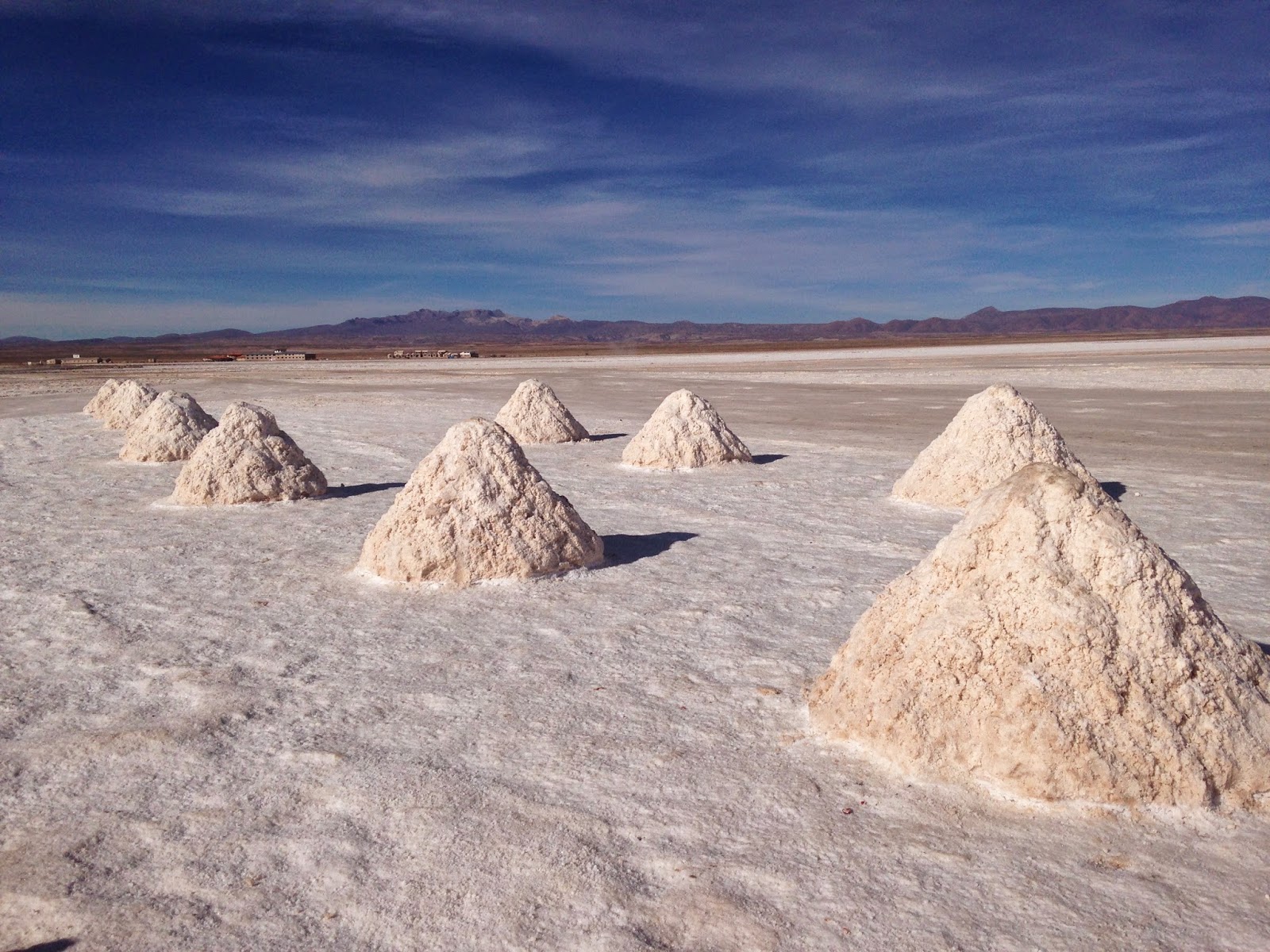 We then started to drive through the main section. It was stunning. 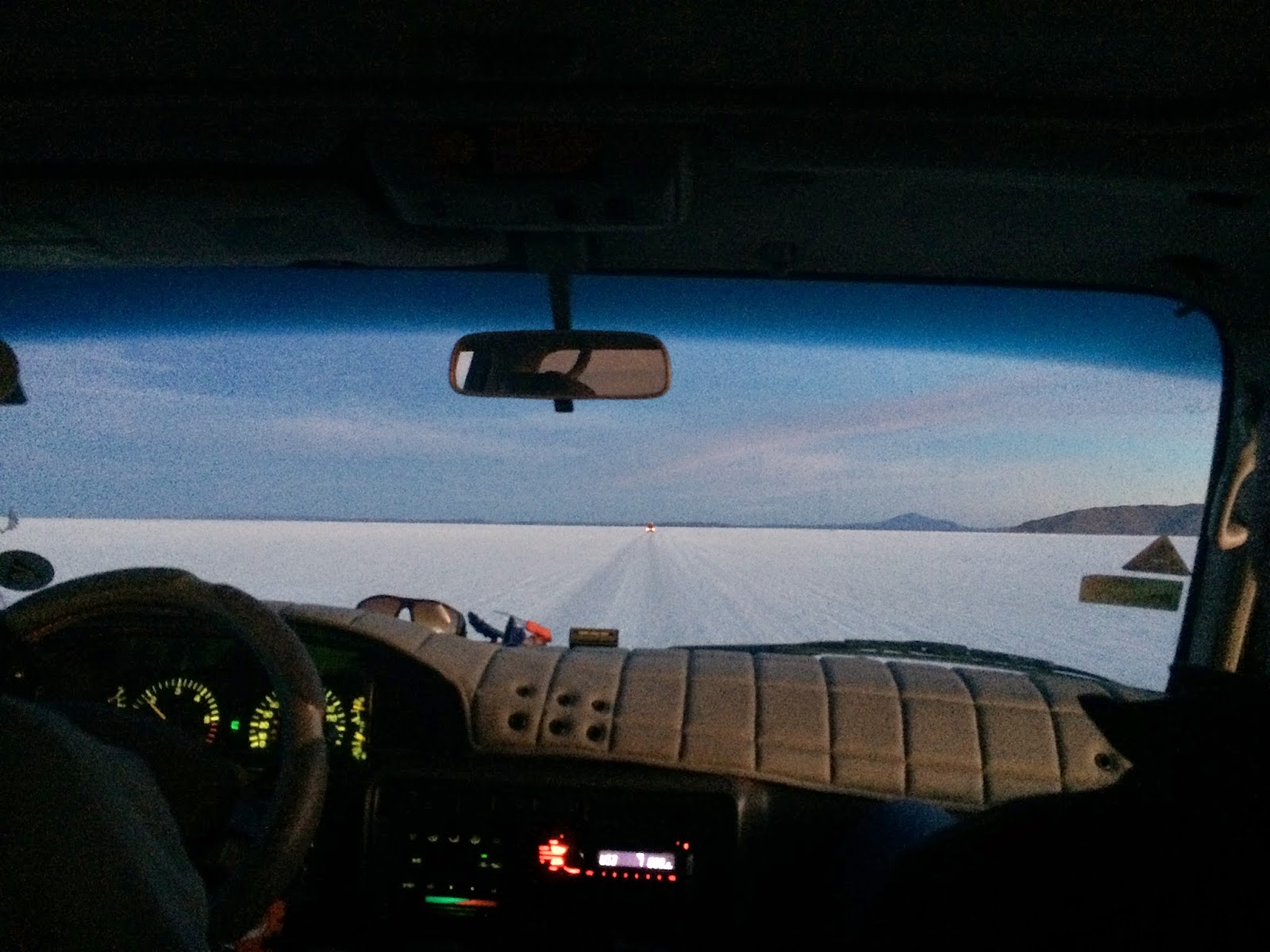 Miles and miles of white stretched out before us. 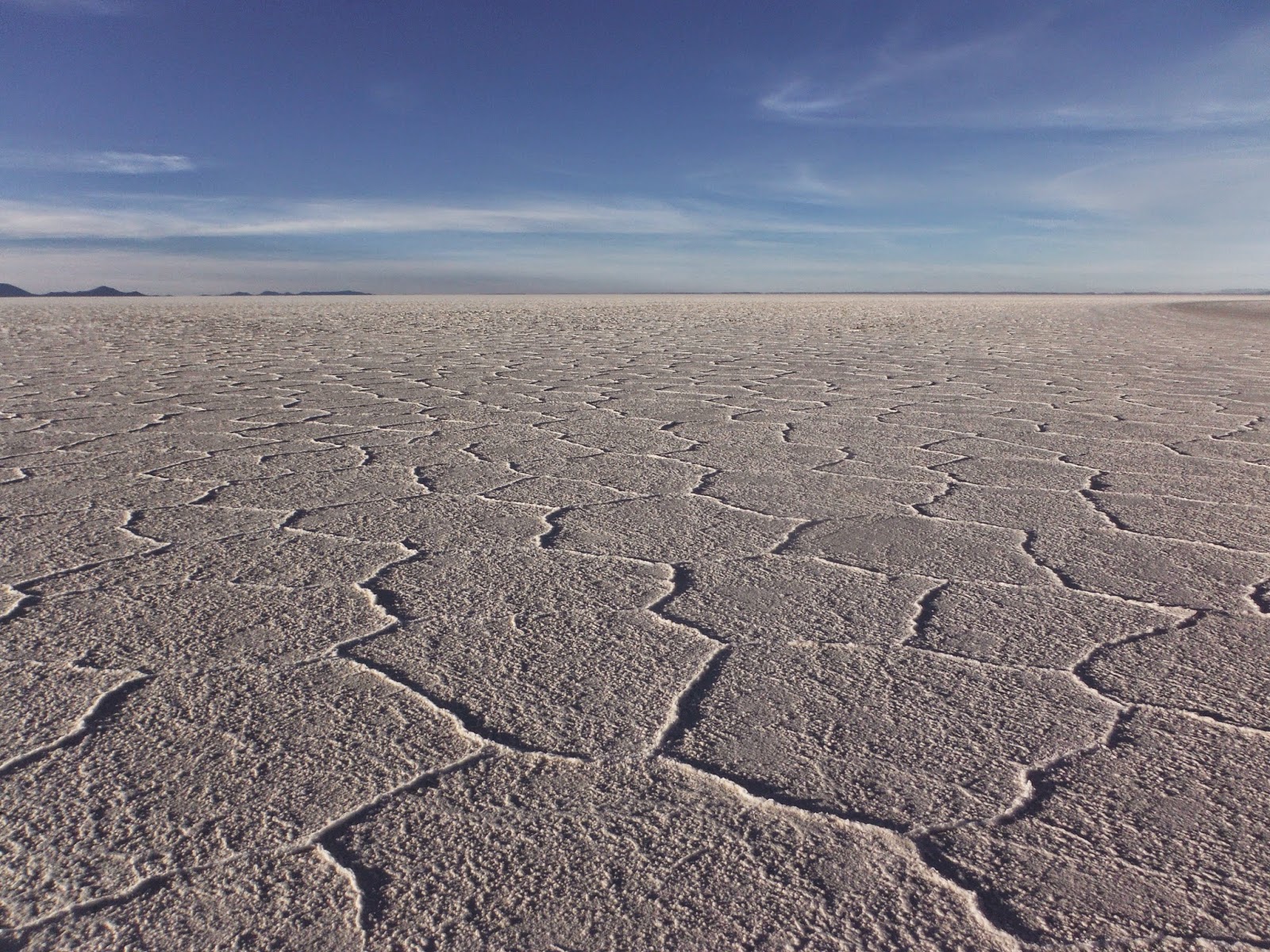 Unfortunately, due to lack of time, our guide took us straight to Inca Huasi - the cactus 'island 'in the middle of the salt flats. So we had just an hour and a half to visit the island and get our salt flat pictures that we’d been preparing for the last week organized. 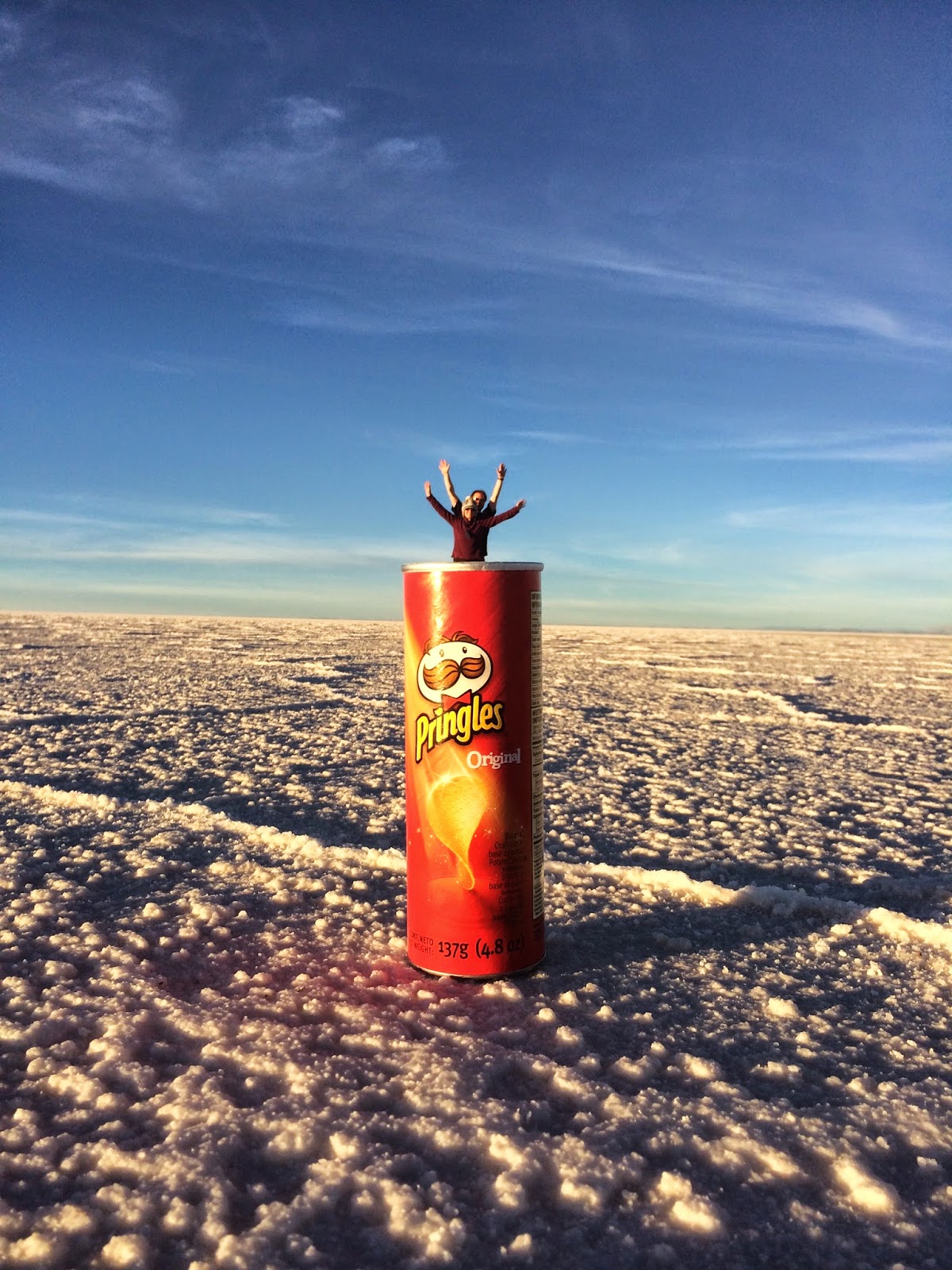 We stupidly started with a walk round the island and then when we realised that the light was going to start to fade, we ran back out onto the salt flats for our photos. 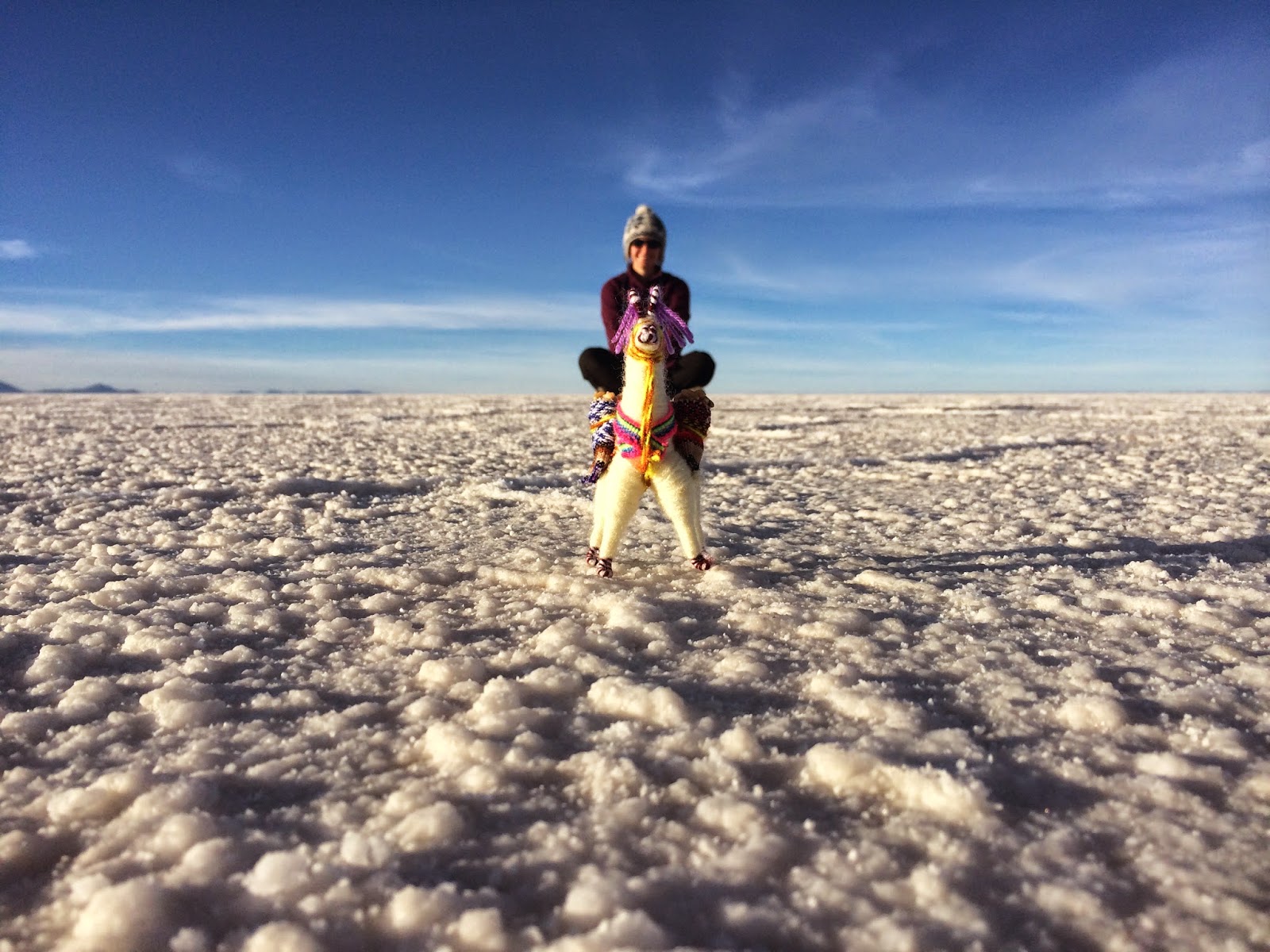 It took us a little while to get them right. However, aided by Ozzie Ben, we managed to get some really great ones, before climbing back into the jeep as the as the sun hit the horizon to head to our lodgings for the night. 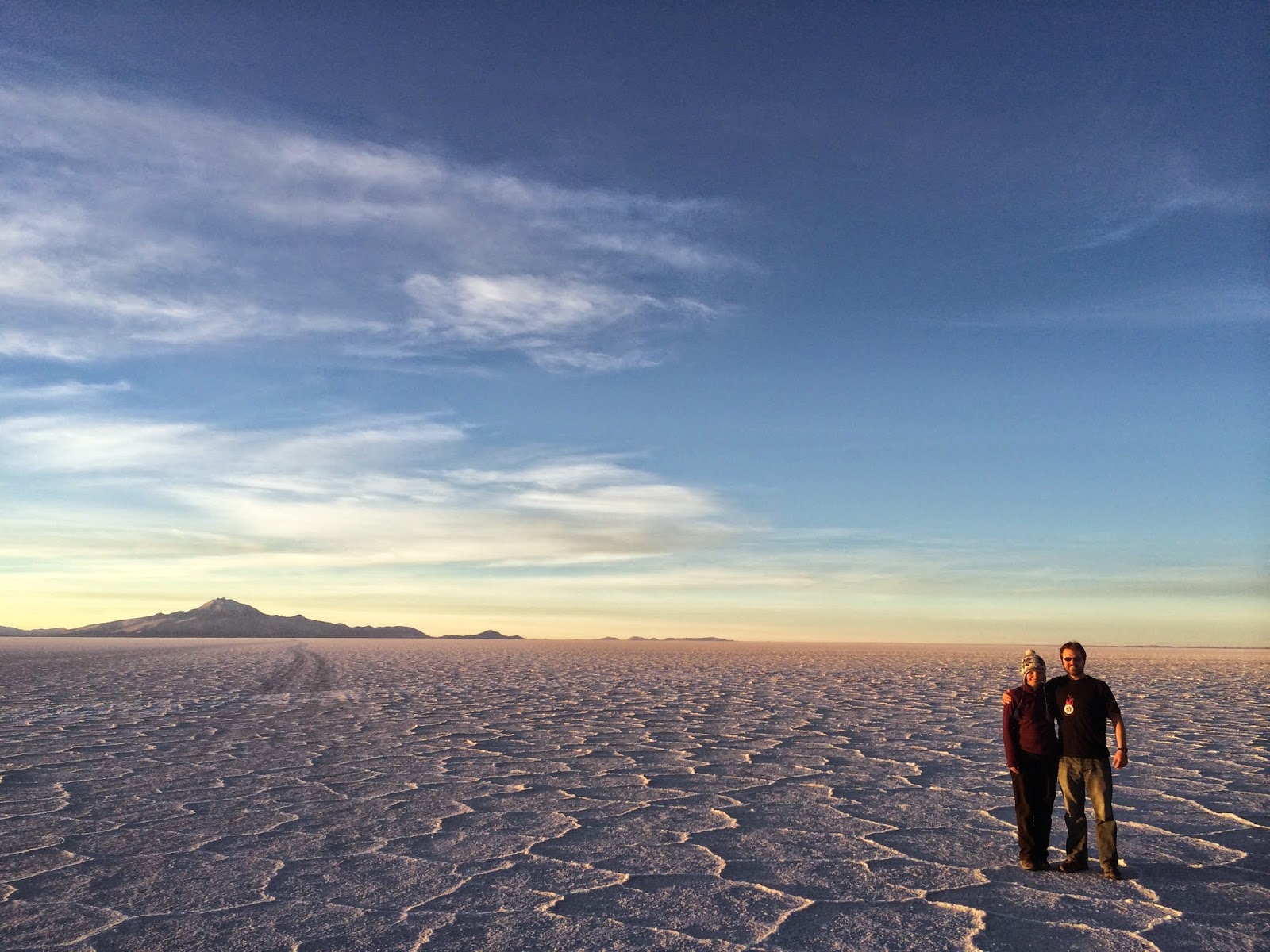 Unfortunately, our problems weren’t yet over! Shortly after leaving the salt flats and with the sun (and all other vehicles) having completely deserted us, we suddenly found ourselves inextricably stuck in very sticky mud. We all got out and tried to push and bounce the jeep out of the mud, but to no avail. Our guide left us in the car to seek help and we were rescued about 30 minutes later by the other guides. 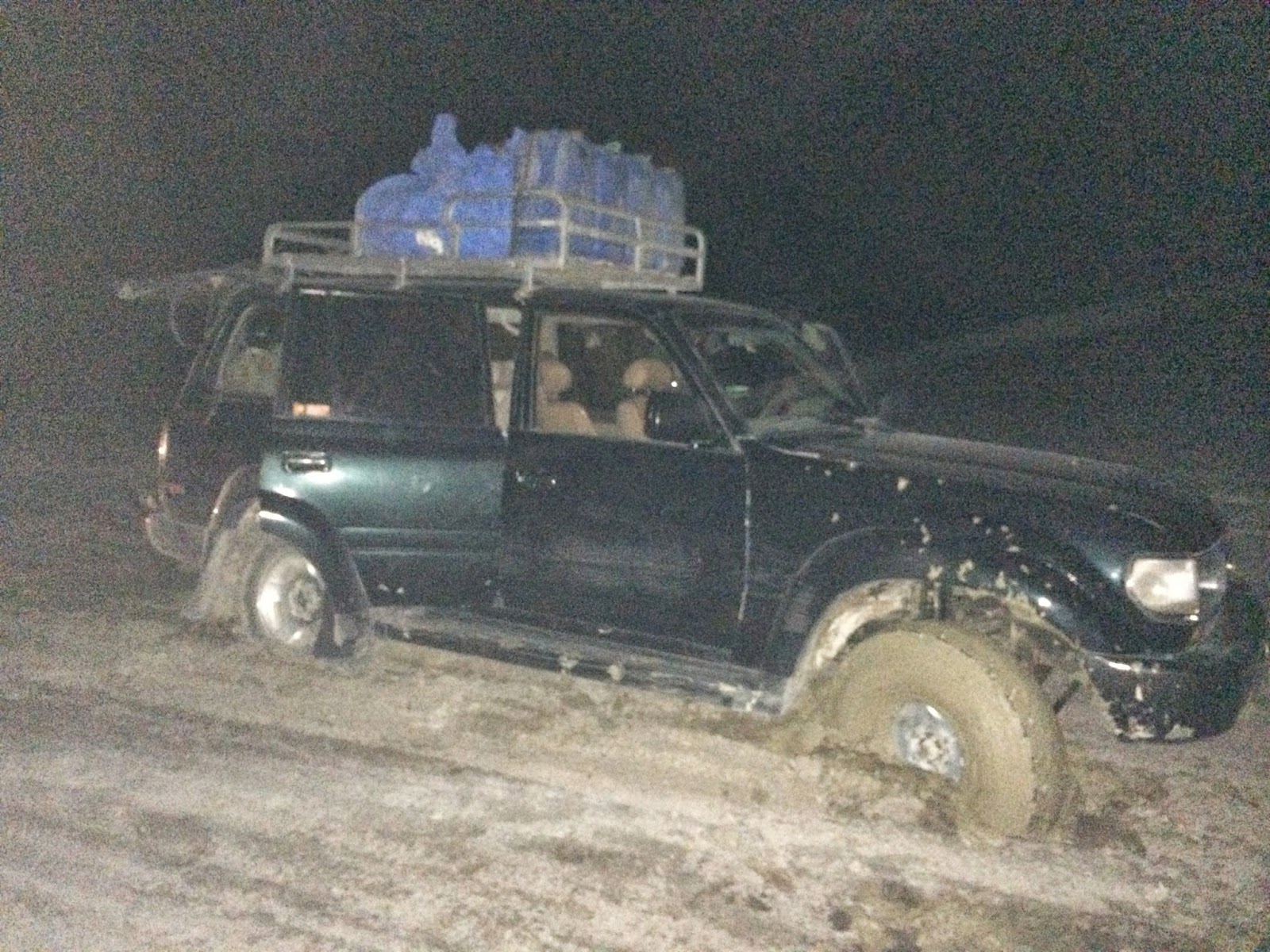 We finally got to the salt hotel (yes it is a hotel made of salt - one of our group licked a wall to check!), enjoyed a beer and dinner and headed to bed.

Meanwhile, the guides went back out to the stranded jeep and were apparently there until 1 in the morning, freeing it from its muddy trap.

Day two of our tour was rather uneventful in comparison! We were treated to twelve hours of beautiful, sometime stark and often otherworldly landscapes across the south-west of Bolivia, including snow capped volcanoes, steaming ‘fumaroles’, strange rock formations, beautiful high altitude lakes, lots of pink flamingos and an Andean fox.

This was all capped off by an evening in a very hot, hot spring, looking up at the beautiful display of stars above us, sipping red wine. It was beautiful and we stayed in the pool for about 4 hours. Our guide pointed out the Inca constellations to us, including the lama and baby lama, which are shadows in the milky way. 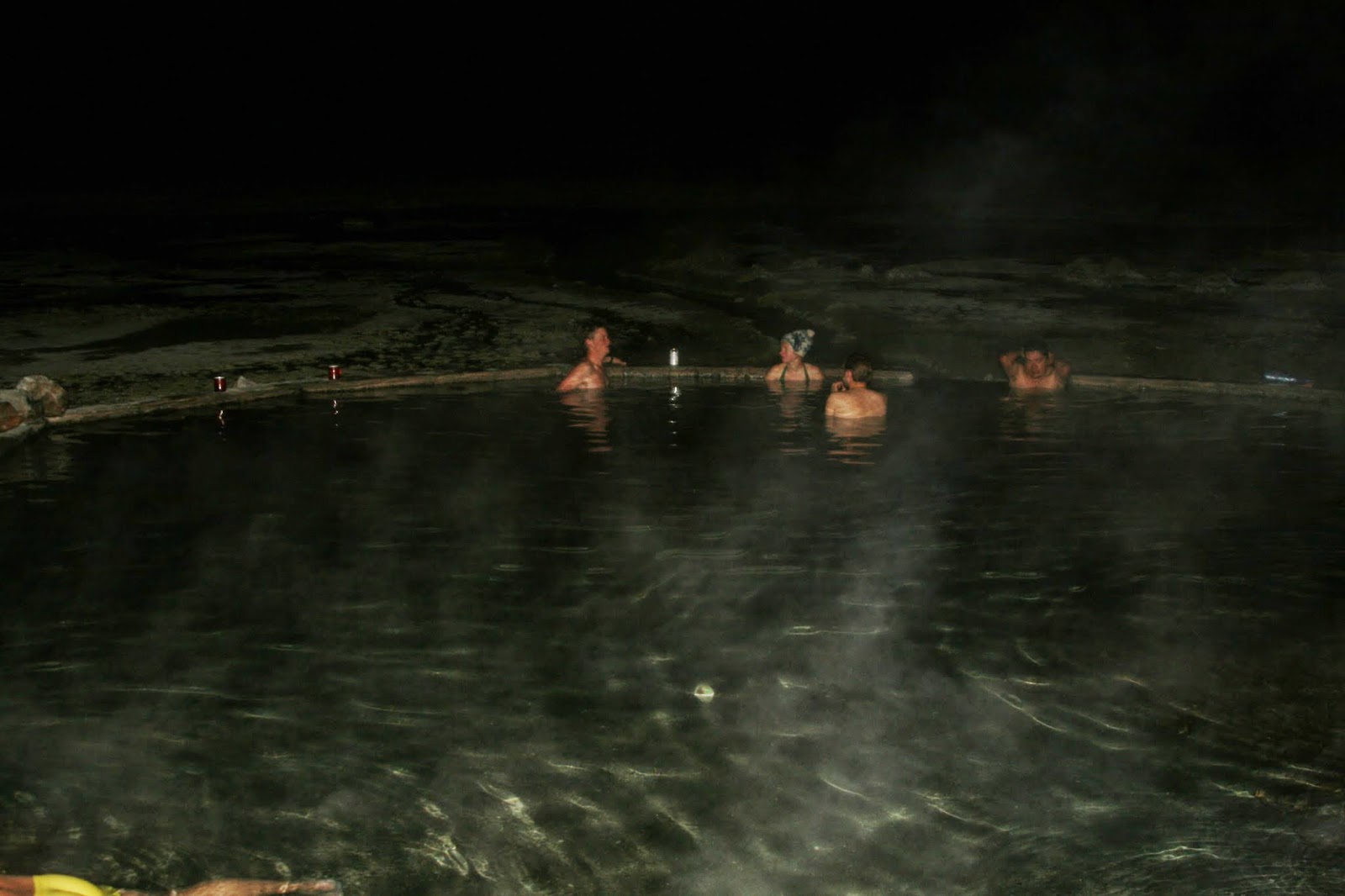 We’d learnt on the Inca trail that the Inca constellations were made up of the shapes of the dark bits between the stars rather than the stars themselves, but this was the first time, I’d seen them properly.

We were also treated to an absolutely stunning moon rise, before heading off for some much needed sleep.

The third day of the tour was relatively short for us, as not long after 11, we got to the border, crossed into Chile.

From here our bus descended to 2438m (!) into the warmth of the Atacama desert - the driest desert on earth - and we headed into the oasis town of San Pedro de Atacama.
Posted by Sarah at 03:42