Siete Cascadas and the road to nowhere 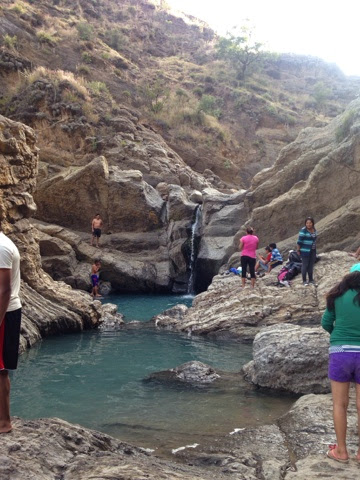 One Sunday in Sucre, we decided to go for a relaxing afternoon to the Siete Cascadas (seven waterfalls). We’d been told it was a beautiful spot, with pools to bathe in and areas where you could jump in. And it was only a short ride outside of Sucre.

By the time we’d got ourselves ready, it was getting a little bit late and so we decided to “splash out” and get a taxi rather than work out where to catch the bus from. But the taxi drivers we stopped didn’t seem to want to take us there. Some of them genuinely didn’t seem to know where it was. Others just said they wouldn’t go there and suggested we ask someone else.

Finally, we found one who agreed to take us there for 50 bolivianos (about £5) and we set off. He was a lovely guy and I chatted to him about his family and travel in Bolivia as we headed out of town.

The girl had seemed more certain of herself than the boy, but the taxi driver seemed satisfied and so we continued down the road. I say road, but this can be quite a broad term in Bolivia and doesn’t always mean what most people would classify as a road. As we continued downwards, the drops off to the side became steeper, while the conditions of the ‘road’ worsened into a single vehicle, steep, gravel track, full of hairpin bends.

I started to grip on a little tighter to my seat. James whipped out his iPhone to look at the map he had downloaded of the area and to pinpoint where we were with GPS. I kept torturing myself by glancing over at it to see how many more hairpin bends we had until we reached the bottom – it was a lot and did not help my nerves. This road was definitely worse than the Death Road.

We passed a tent and a motorbike on one particularly tricky corner and then after a few more twists and turns we came across two children herding animals up the hill. Our driver stopped and asked them if we were going the right way. We weren’t. And I couldn’t see anywhere where we could turn round on this very narrow and horrible road. We reached the next corner and miraculously managed to turn around without rolling over the edge, but then we had to get back up!

It was bumpy and gravelly and the car did not seem to like going up very much. So much so that when we reached the tent and motorbike again it stopped moving. James got out and pushed for a bit. And there was a moment where I thought we were really stuck. Luckily, there was still some life in the car yet and somehow it started again. After a few more hair-raising bends we were back at the top and I finally unclenched my fists!

We found a woman with much more reliable instructions on how to get to the waterfalls than the children who we had previously asked. She climbed in the car with her child to show us the way (getting a free ride to her bus stop along the way).

He then dropped us off at a river bed and told us that if we followed it along then we’d reach the waterfalls. He agreed to pick us back up again in a few hours time. As we started to walk along the riverbed, he appeared at a bridge that went over the top and indicated to us to climb back up.

Apparently, the last time he’d gone to the waterfalls, the bridge hadn’t been there and he could now drive us closer.

We got back in the car and drove up the hill. We’d been driving a little while when he stopped a car coming the other way, who informed us that we’d passed the turning for the waterfalls.

By this time it was getting comical and with the driver joking that the best way to learn was to make mistakes, we turned round again and he dropped us off in the right place this time.

Our 20 minute taxi ride had turned into an hour and half ‘adventure’ and so we had less time than envisaged to enjoy the waterfalls.

We hiked down to the water and spent a pleasant couple of hours allowing our heart rates to return to normal, watching the locals jump into the pools.

We didn’t quite brave it ourselves this time, as we’d already had plenty of excitement for that day.

Apart from rescuing a couple of other Gringos who had lost their friends and couldn’t remember the way to the bus stop without them, we thankfully had a rather boring and uneventful journey back to Sucre.
Posted by Sarah at 21:21