We spent 3 and a half weeks in Bolivia’s constitutional capital, Sucre. Independence was officially declared in the town and while most of the administrative functions of Bolivia have moved to La Paz (with the exception of the Supreme Court), Sucre is still officially the capital, according to the constitution. It is considerably smaller than La Paz though and you can get to know it, or at least the central area in a matter of just a few days.

We were there for Spanish classes and so most of our time was spent in the classrooms of Sucre Spanish School or doing our homework (!)


However, we did manage to eat and drink very well in Sucre. And we had some spare time for visits and excursions inside and outside the city. In no particular order, here are our some of our Sucre highlights:

1.  Casa de la Libertad:  This building on the main square in Sucre is where Bolivia signed its declaration of independence and where its first constitution was drafted. It is now a museum and for history and politics buffs, a guided tour around the building gives a fascinating insight into the history of poor ‘ole Bolivia, which just kept losing wars and territory throughout the 1800s and then had a series of bad leaders throughout the 1900s. The building is also beautiful, although annoyingly you have to pay extra if you want to take photos.

2.  Lashings and lashings of lemonade at La Recoleta: We developed a bit of a lemonade addiction whilst in Sucre.


The café at La Recoleta has a beautiful view over the white city of Sucre and also serves delicious lemonade. We spent hours sipping on the lemonade, reading our books, admiring the view and being serenaded by local musicians. 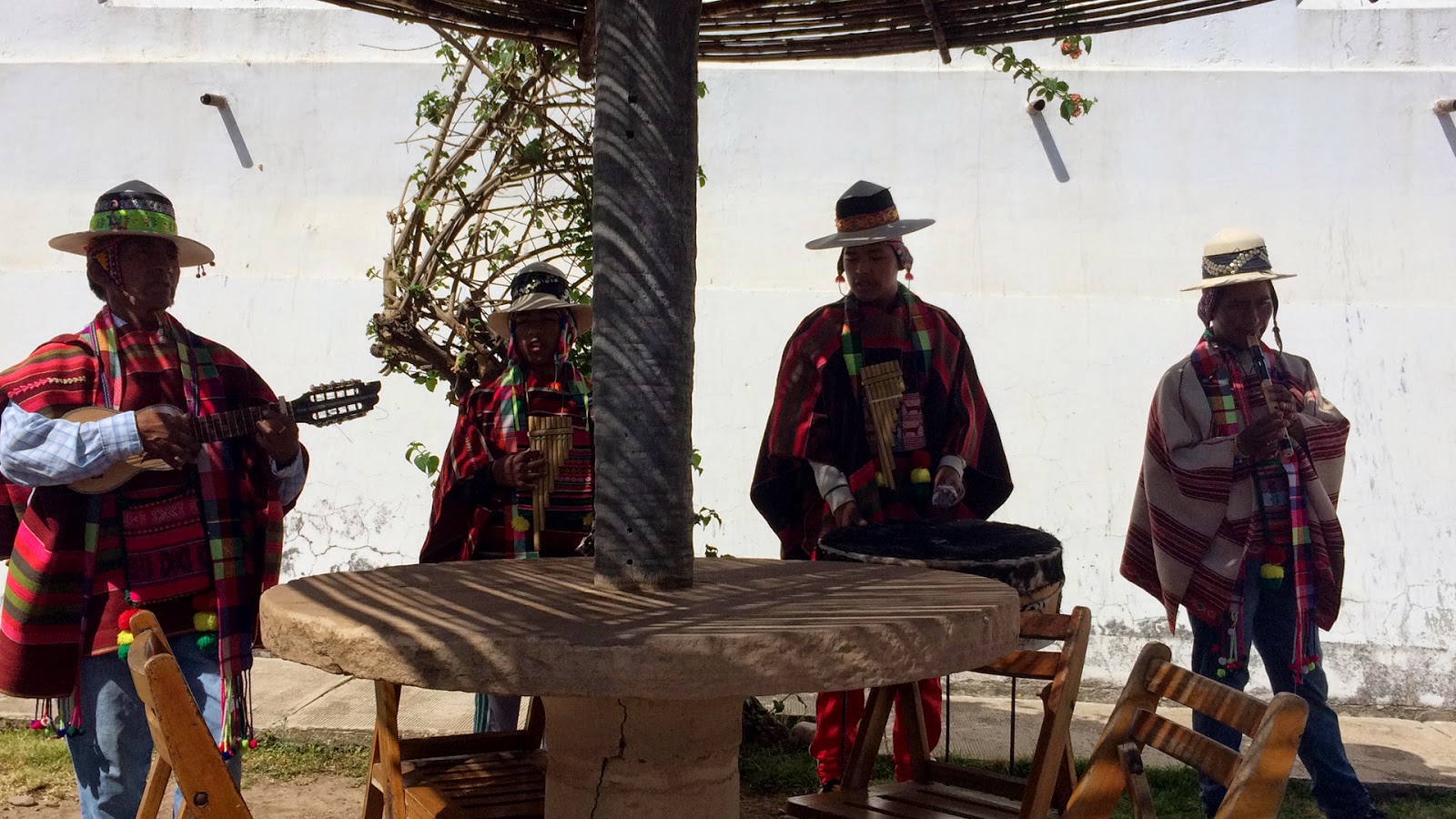 3. La Quimba: This cute little bar became a firm favourite in our time in Sucre. The staff were really friendly and always made sure you were happy with the temperature of your beer (!), it had a nice mixture of locals and tourists and we really liked the wooden interior. 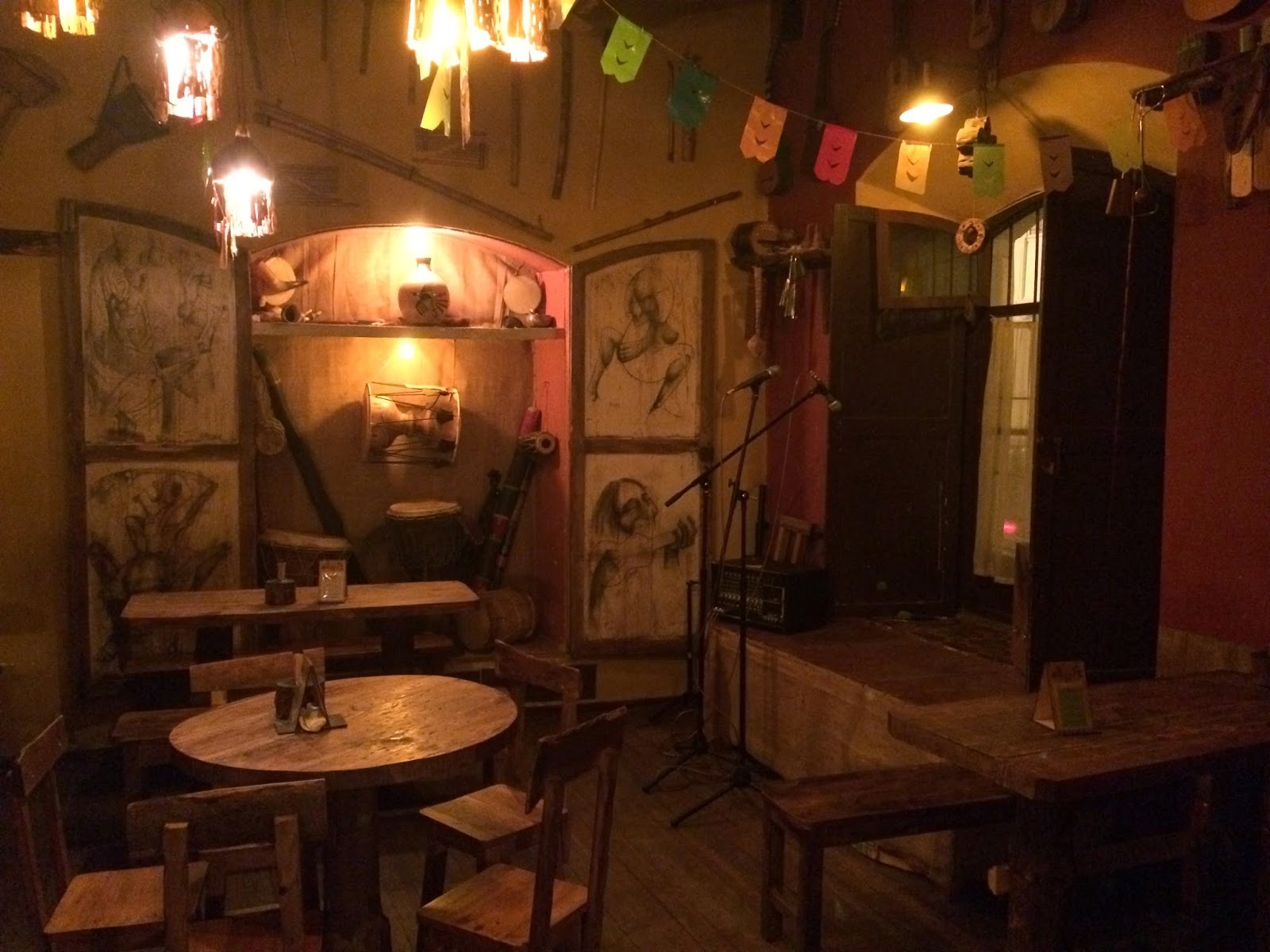 It has live music once a month and while we missed this during our time in Sucre, we were treated to a little preview on one of our visits. 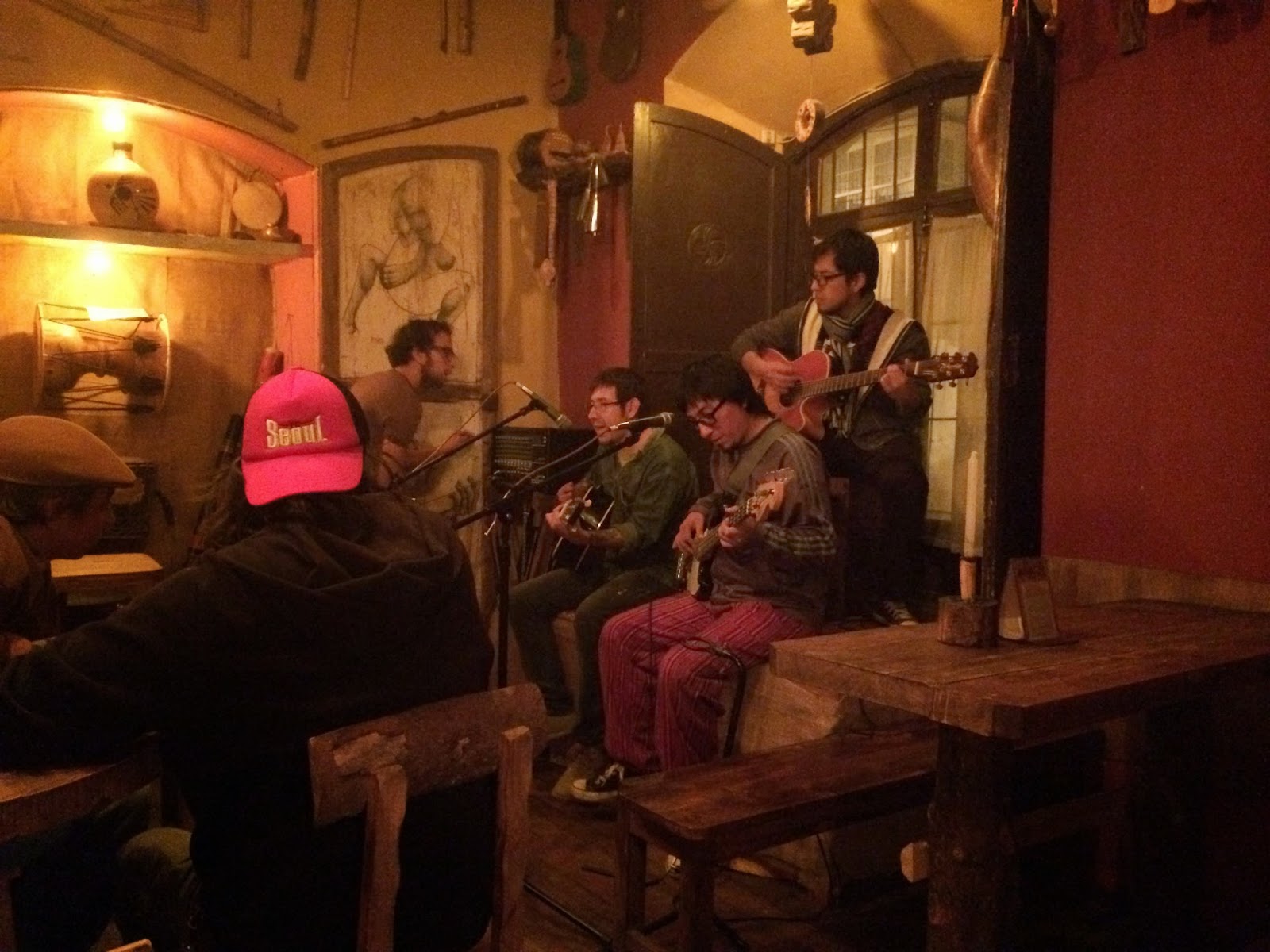 4. Learning Spanish: We spent a lot of time in Sucre at Sucre Spanish school. Bolivia is one of the best places to learn Spanish as the accent is neutral and quite clear. It was also very affordable. 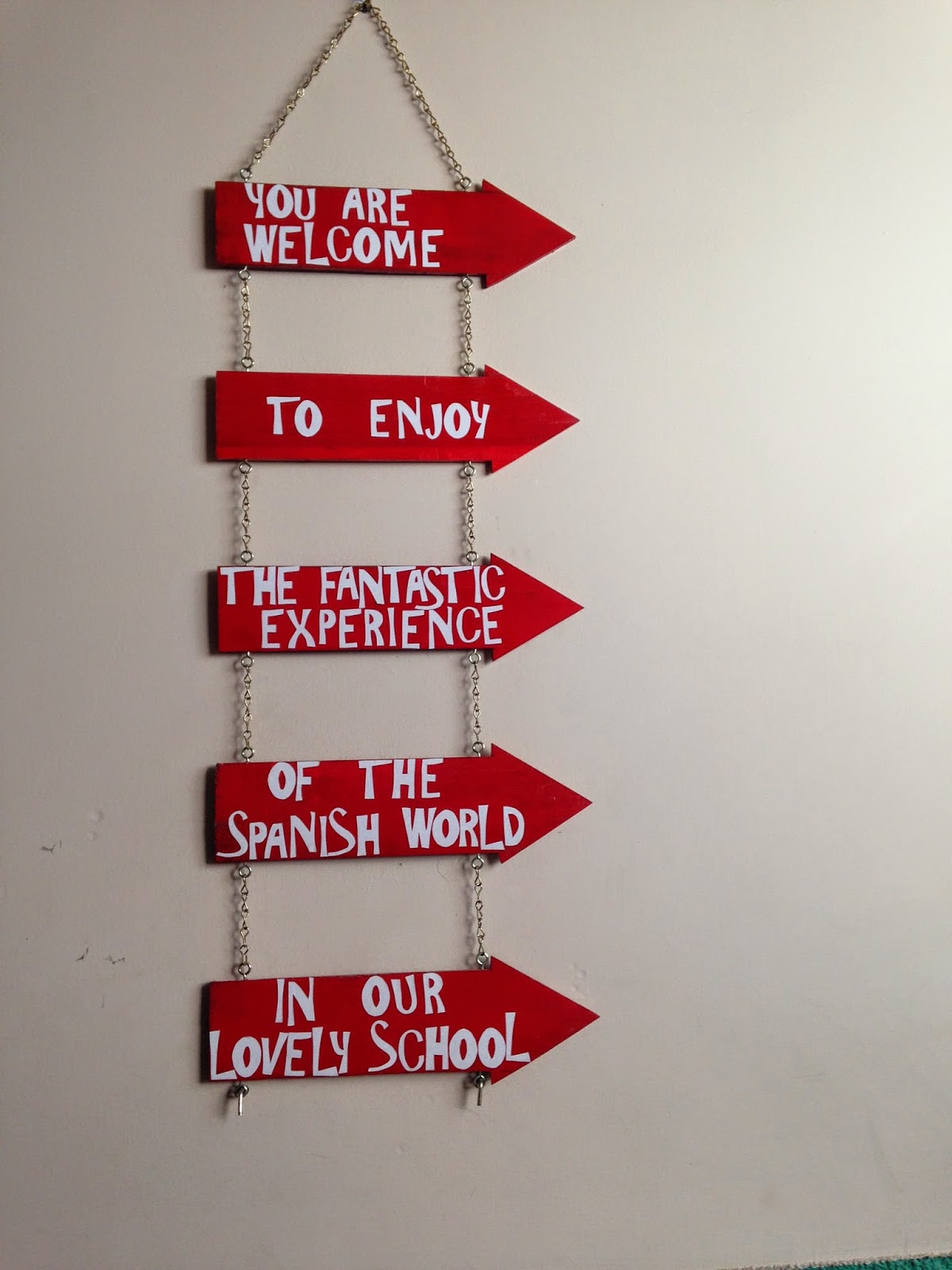 Sucre Spanish School is one of the biggest in Sucre and we chose it, after reading good reviews and because we could start the very next day. The teachers were great and we both learnt a lot.

5. Monte Rosso: OK, so we’re supposed to be travelling in South America and sampling local culture and cuisine, but this Italian restaurant was just amazing and so has to feature in our highlights. 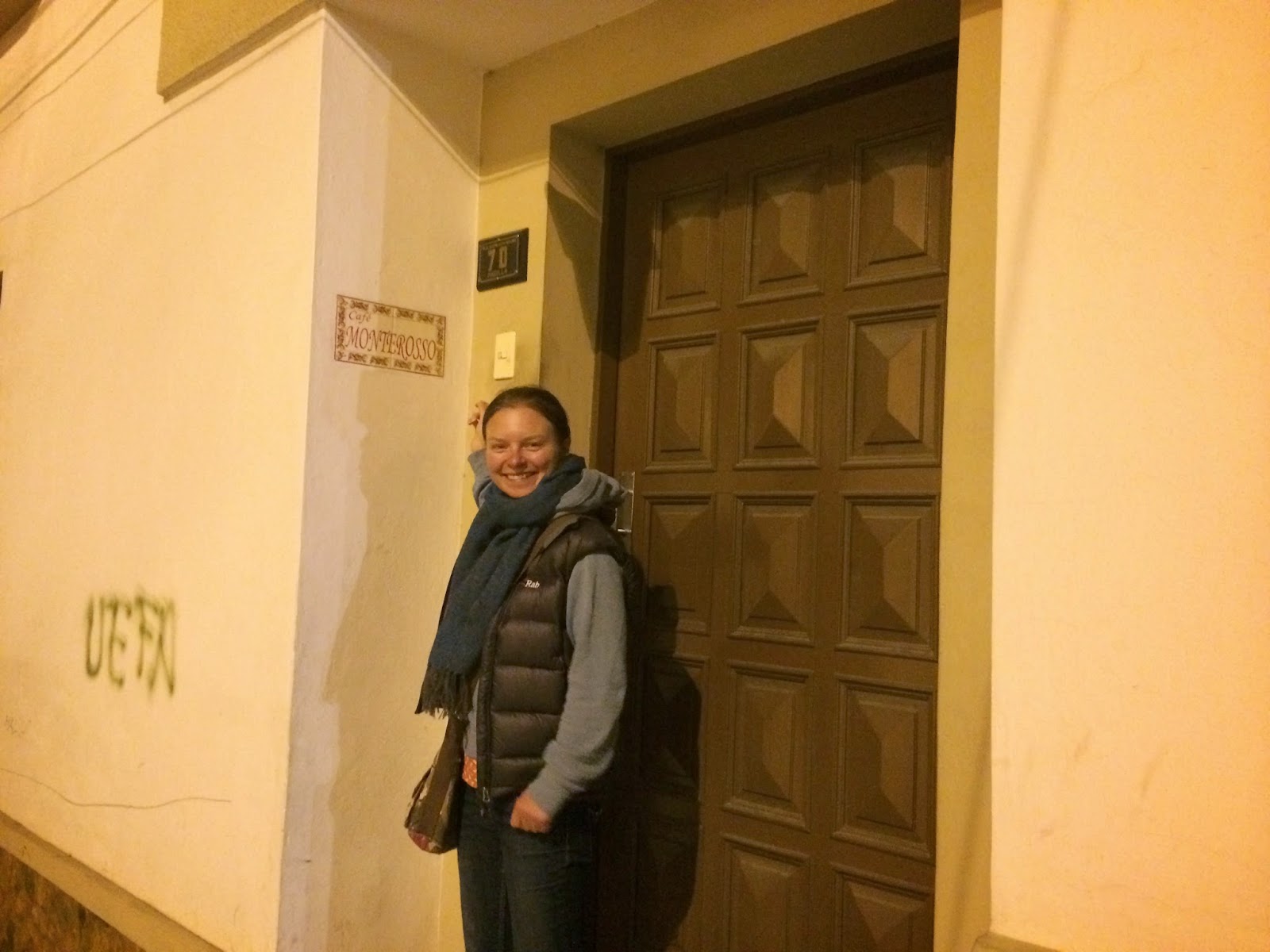 The front door looks rather nondescript and I think we may have just walked past it if we’d not been told about it by other travellers. 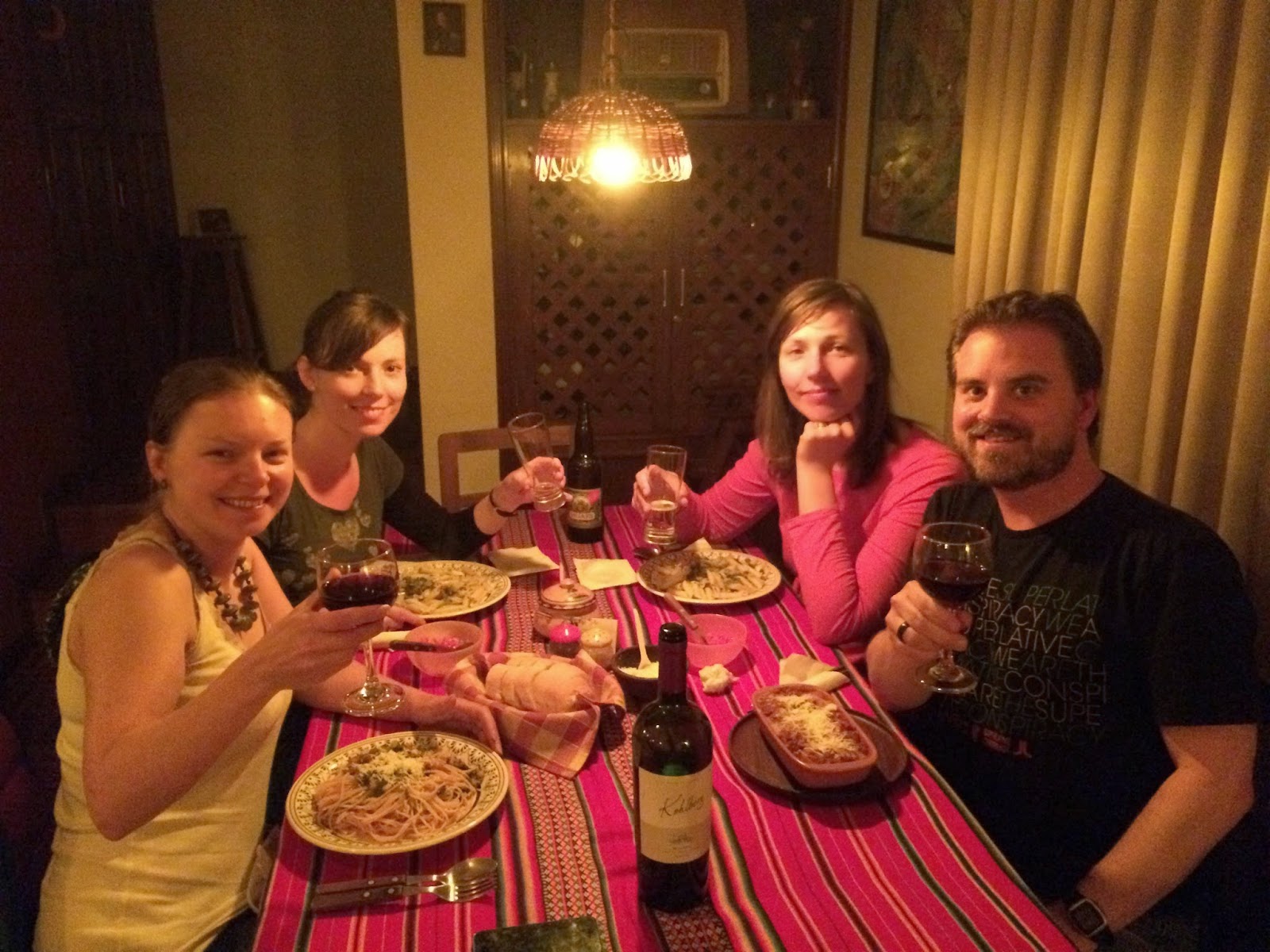 For around only 70 bolivianos (£7) we had a three course meal, comprising of bruschetta, a pasta main and the BIGGEST slice of tiramisu you have ever seen. Delicious.

6. Papas rellenas in Simon Bolivar Park: So this is a bit more ‘authentic’ than our favourite Italian!

We’d tried papas rellenas or filled potatoes in Peru and while they were tasty, they were not a patch on the humungous cheese filled potataoes we got in Simon Bolivar Park in Sucre.  They were very popular with the local school children and absolutely delicious! 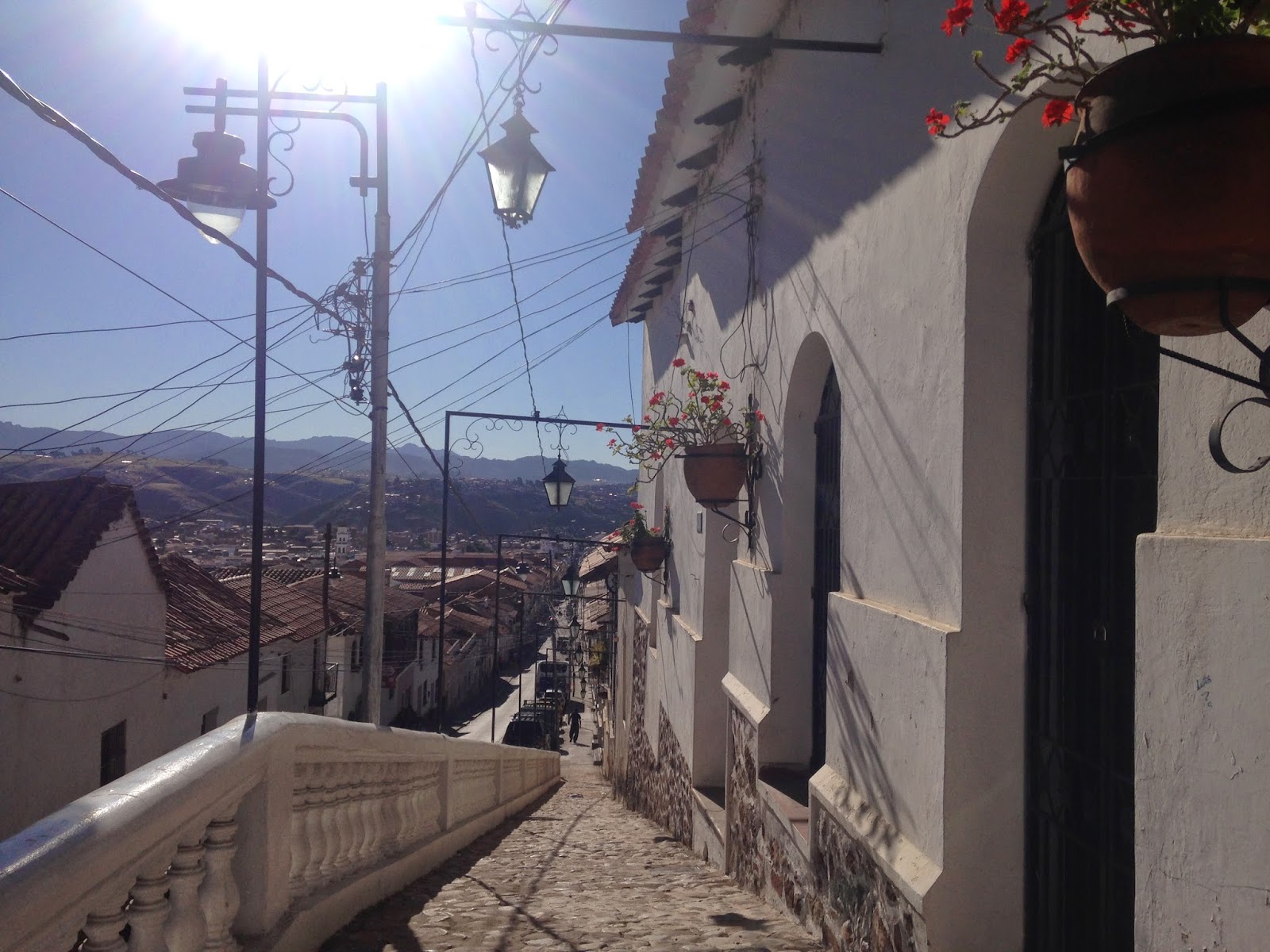 And its colonial buildings seen from La Recoleta, the roof of the administrative building on the main square or simply at street level do make this a very attractive city to stroll around and photograph. 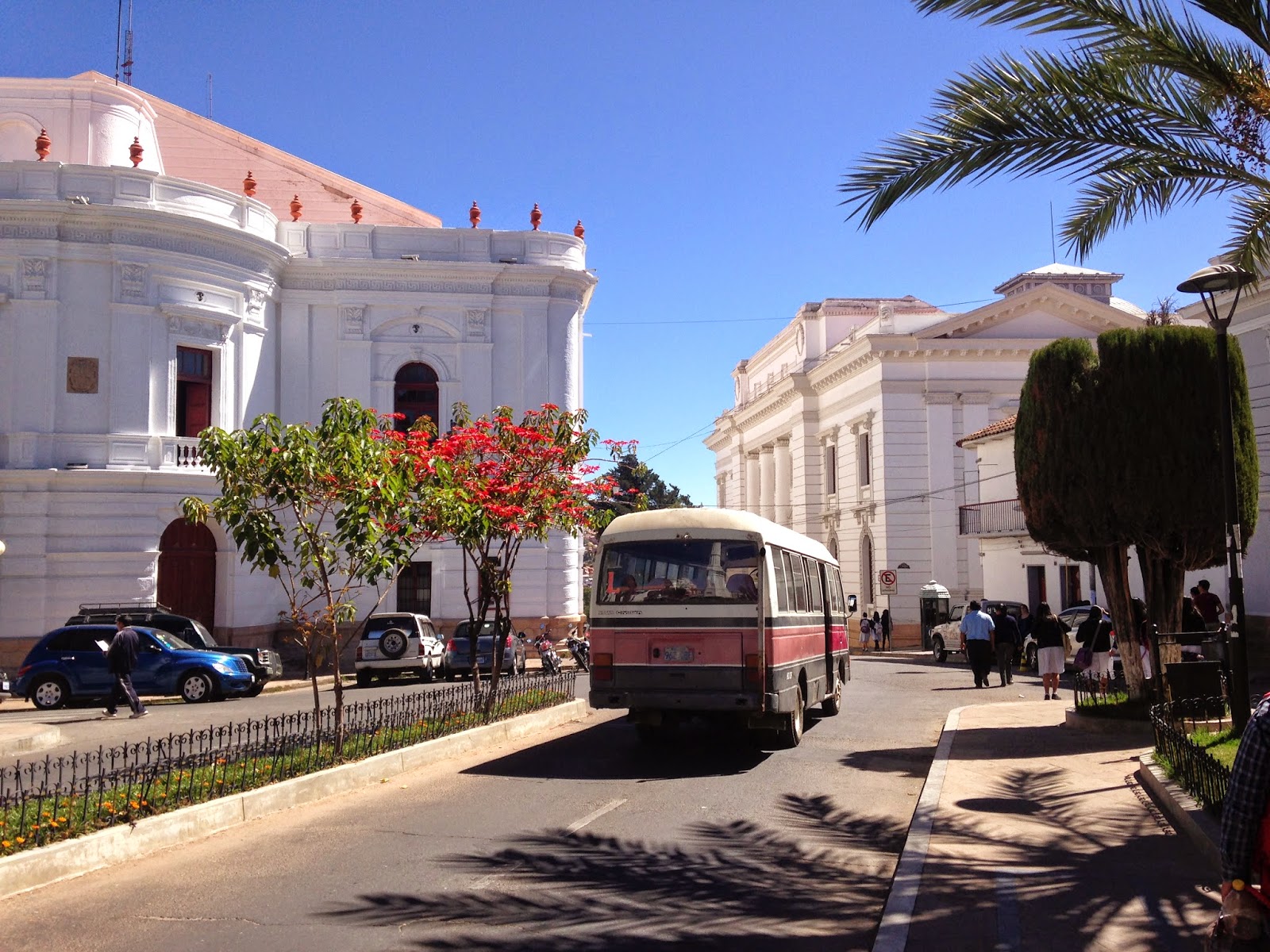 8. The cemetery: From the catacombs in Lima to the cemetery in Pisco, we seem to have spent a disproportionate amount of time on this trip looking at the different ways South Americans dispose of their dead. Sucre was no different. 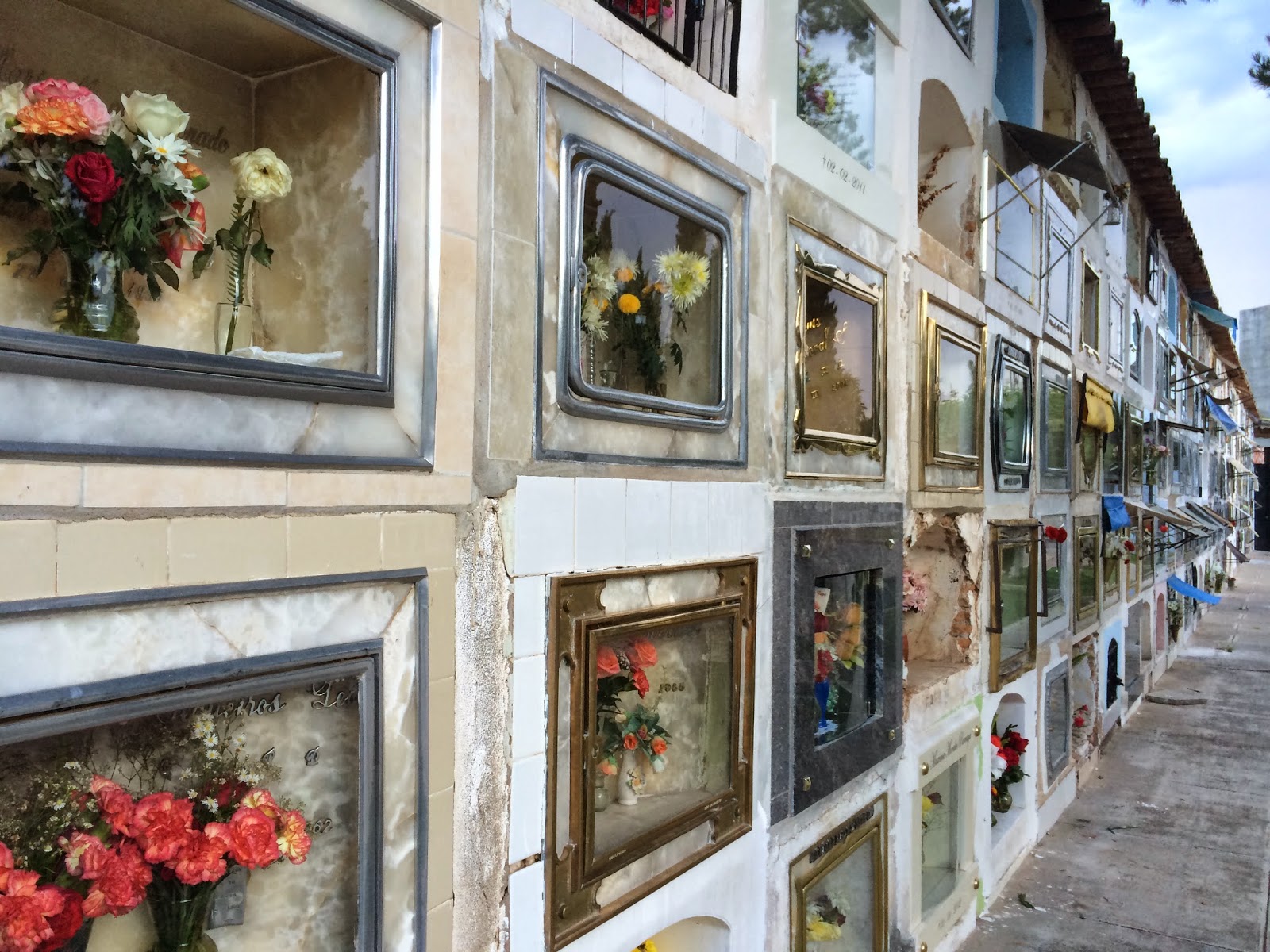 We spent a relaxing hour walking around the very beautiful cemetery, fascinated by the clearly needed expansion of the place as well as the ornate mausoleums. 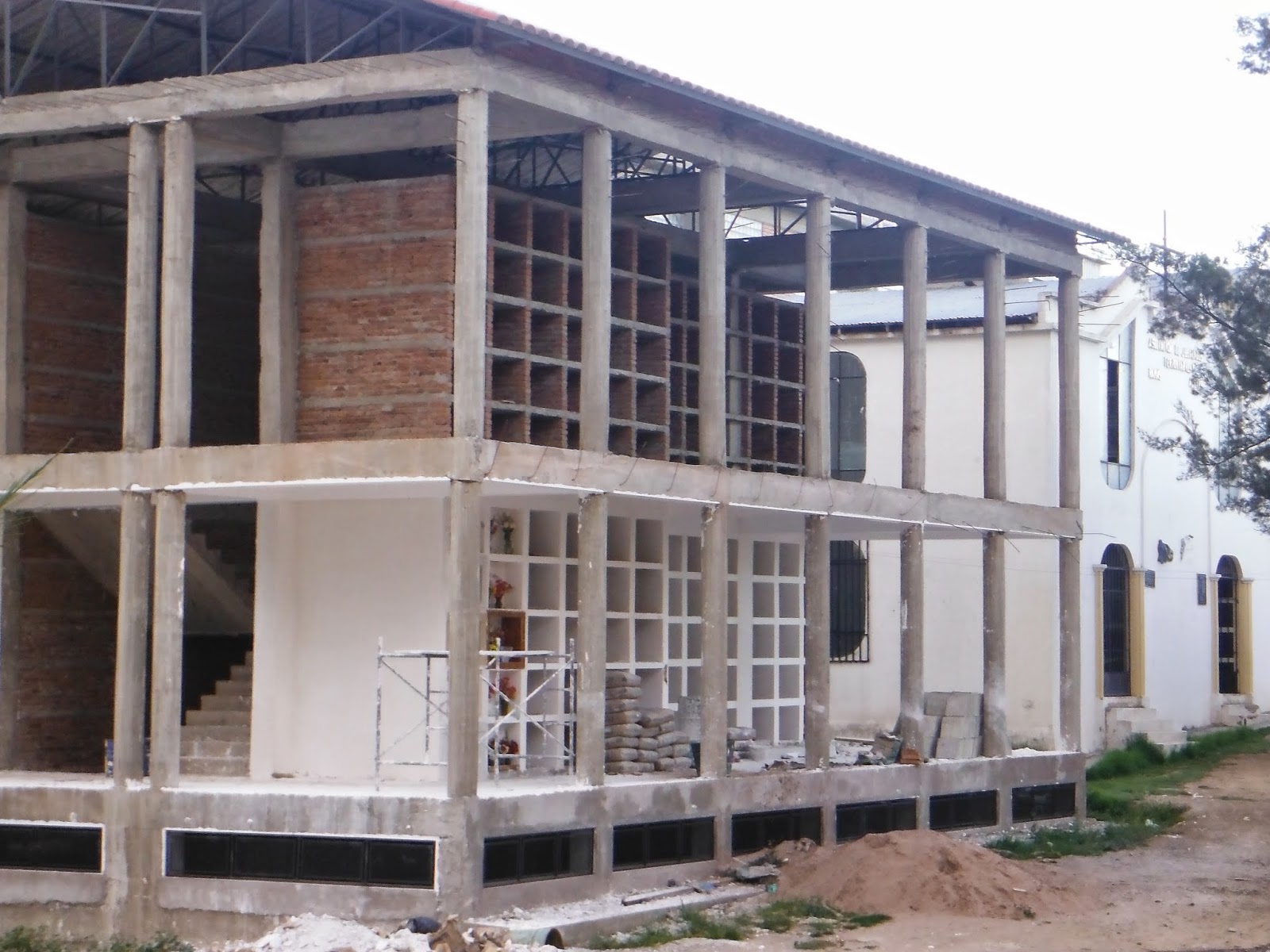 Sucre Life has an interesting article on the cemetery, particularly on how long a family owns the 'niches' where their family members are laid to rest. 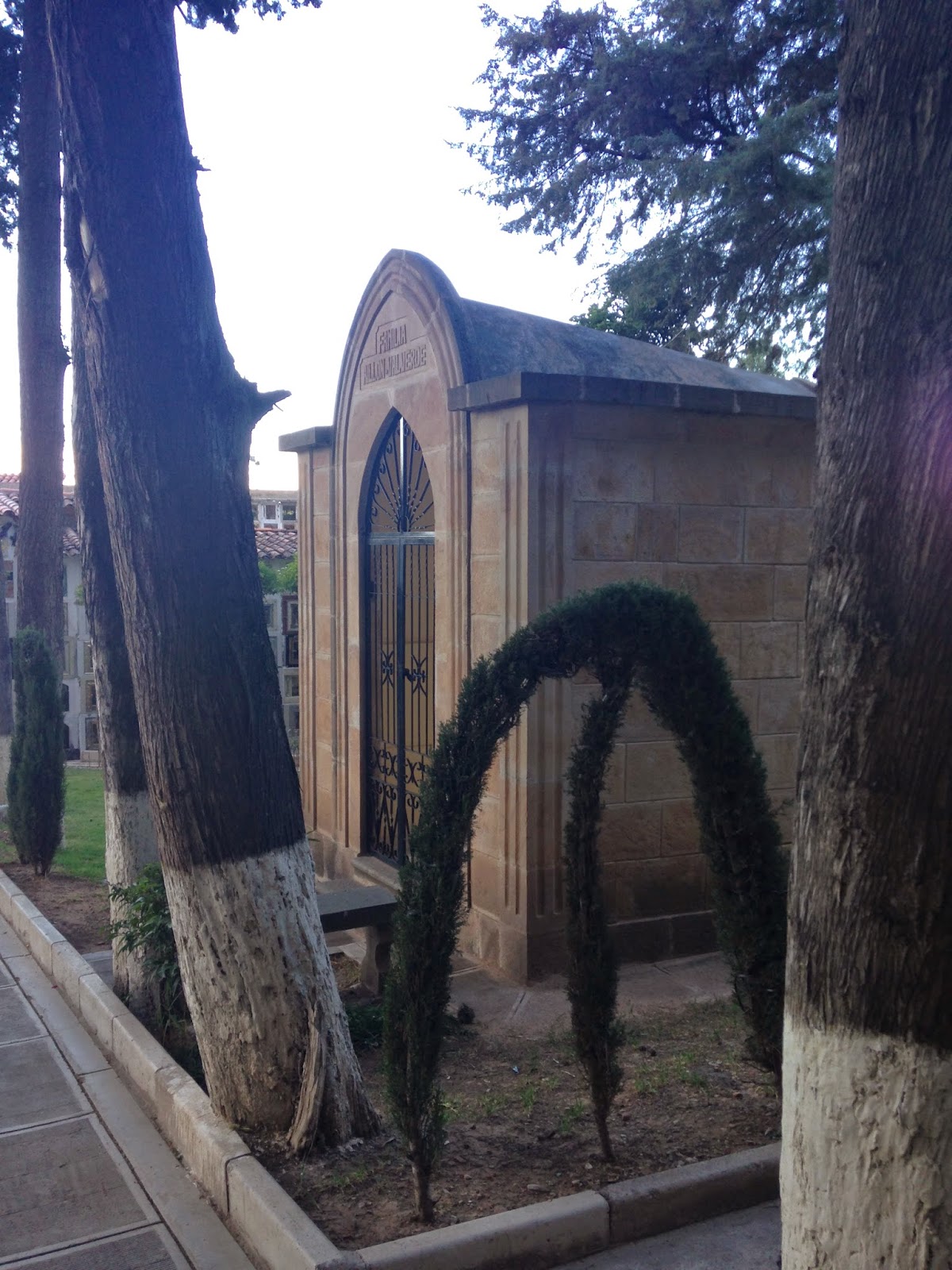 9. A homestay: We spent a lovely week with a local family in Sucre to help practice our Spanish. This wasn’t just any local family though. The husband was a semi-retired doctor and the wife had worked in the university. Their children and long since flown the nest, leaving behind a rather sizeable property with plenty of guest rooms. We had the penthouse suite, with a beautiful view of the city.

10. Parades, parades! We arrived in Sucre for Easter Weekend and got to see how seriously this is taken in this very Catholic country. Good Friday saw a replica of a rather dead looking Jesus being paraded through the main square, followed by a mourning congregation. 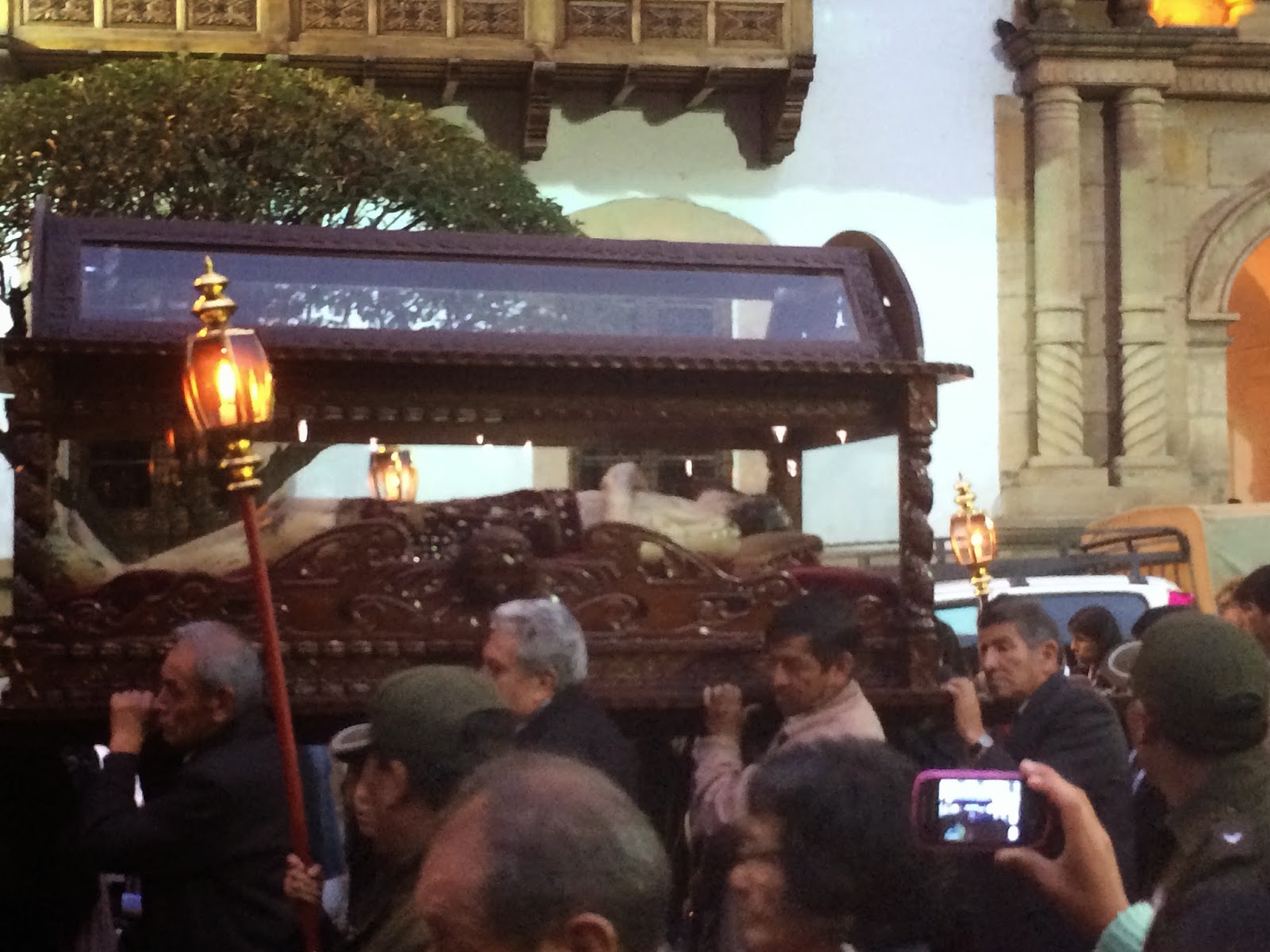 A couple of weeks later, the Sucreños celebrated May Day in style – no protests, just marching bands and dancing cholitas!

11. The dinosaur park: Just outside of Sucre is a cement factory. Not particularly interesting you might think. 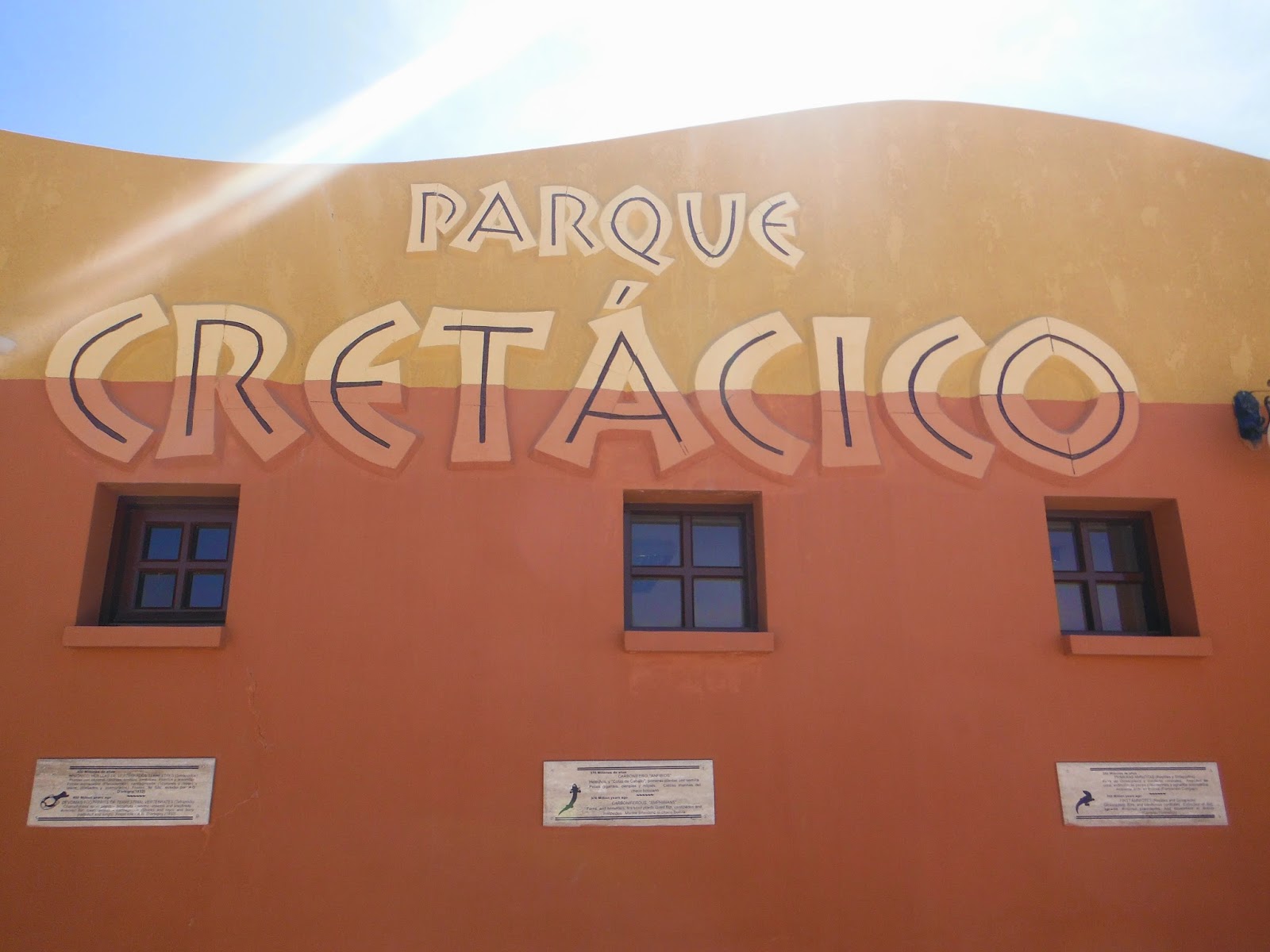 But in the 1990s, the cement company were mining a section of a hill for use in the production of concrete, when part of the hill fell away to reveal over 5,000 preserved dinosaur footprints. The area has now been turned into a tourist attraction. 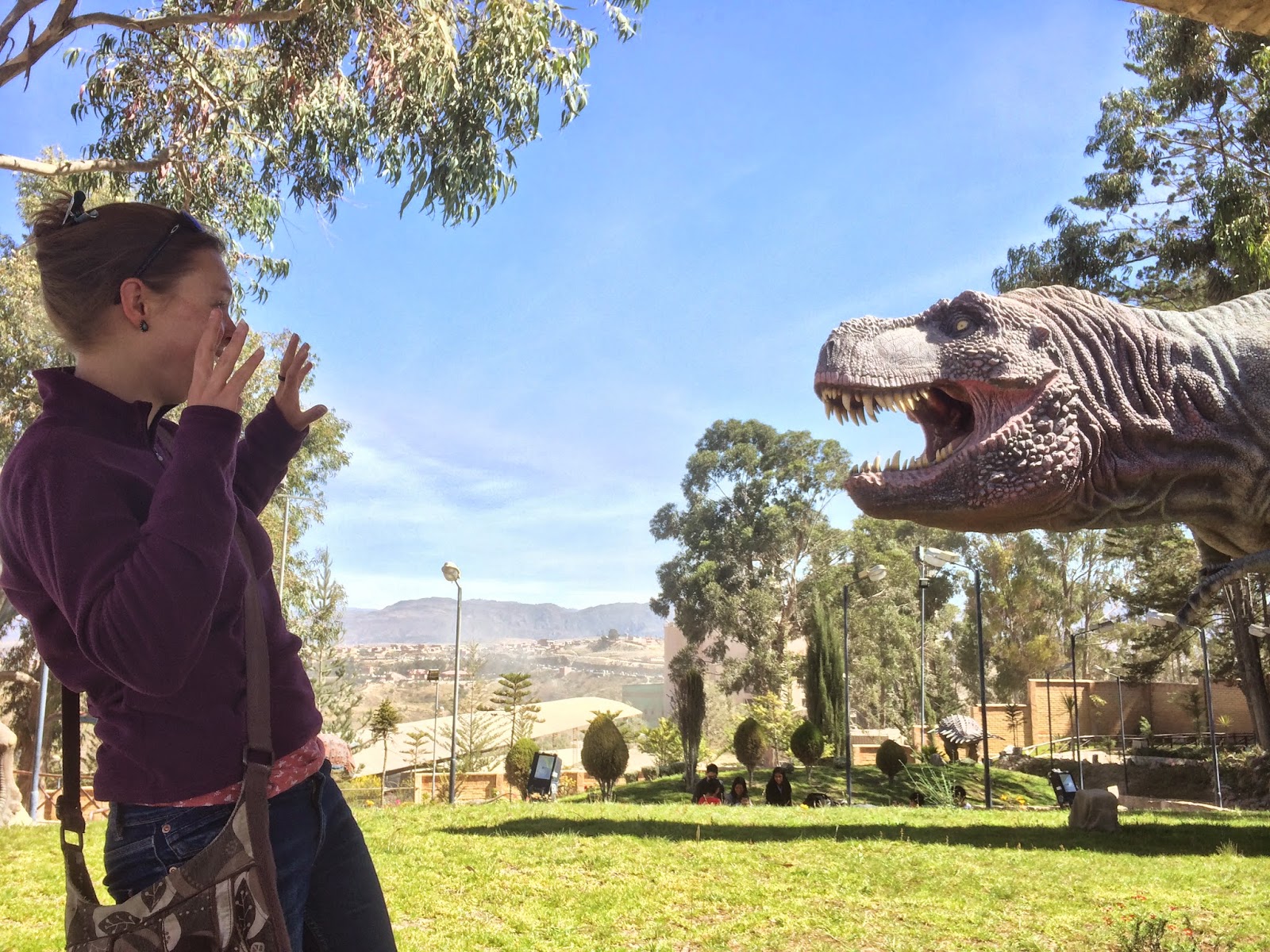 When we were there, it was the first week that they had permission to take tourists up close to the prints. Previously, we would have had to have viewed the footprints through telescopes from the hill opposite, but we were allowed down into the valley next to the prints.

12. La Glorieta: I’m not sure if this was a highlight or just plain weird, but La Glorieta is a "castle" very close to Sucre, built by the country’s only prince and princess. 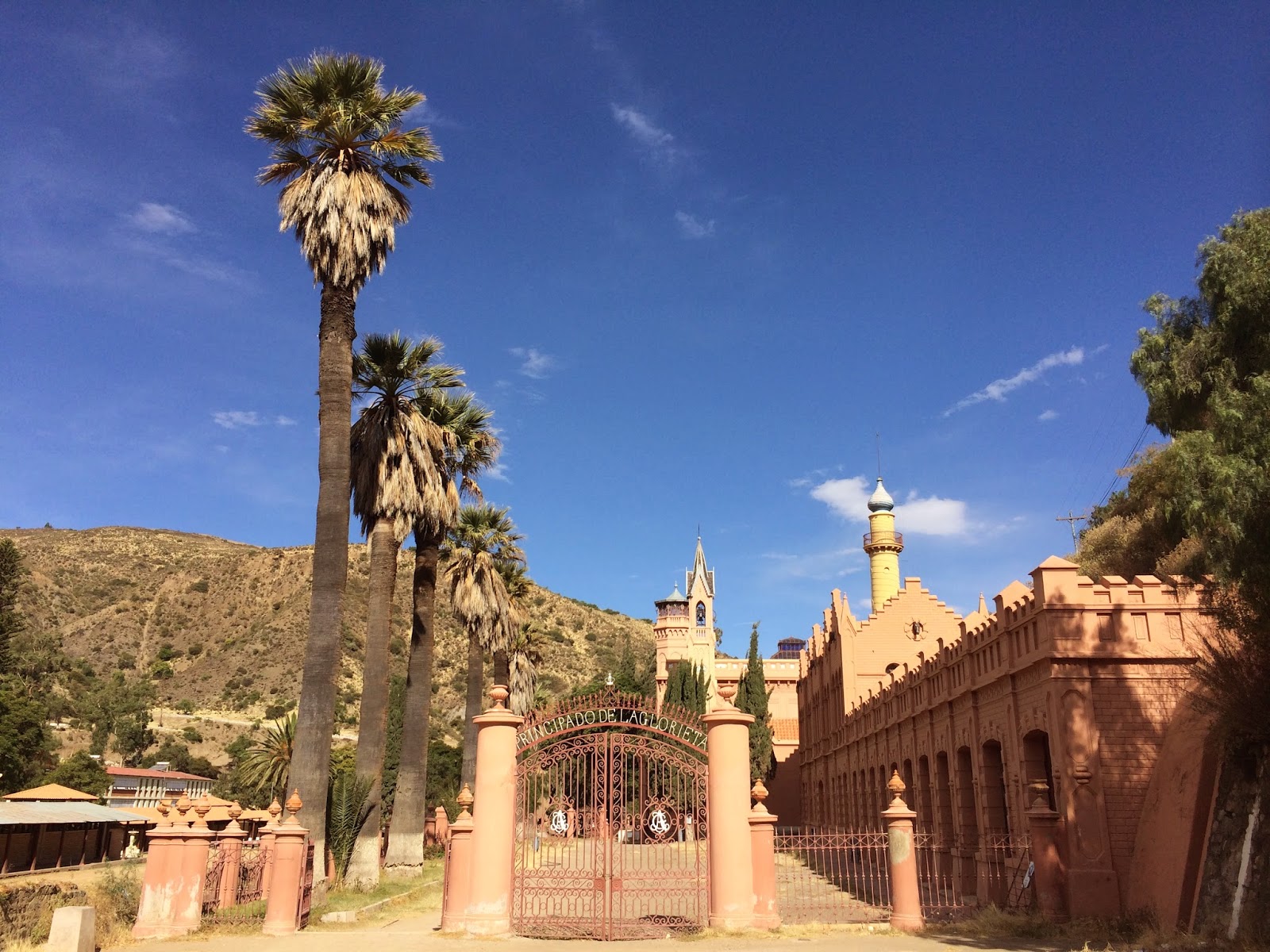 They we given their titles by the pope for all of the charity work they undertook, most notably the development of an orphanage. The prince and princess travelled extensively and modeled their eclectic-style home of the different structures and buildings they saw on their travels. The clocktower is apparently modelled on Big Ben. However, its only real resemblance to Big Ben is the fact that it is a clocktower. It does not look like Big Ben!


13. The market: The central market in Sucre was fantastic for getting provisions for lunch and dinner as well as for chilling out with a fresh juice at one of the fruit stalls. They also do fruit salads, which look amazing (we didn't try one though).


14. The Origines dance show: Every night at Origines, there is a dance show to demonstrate the different traditional dances from across the country. 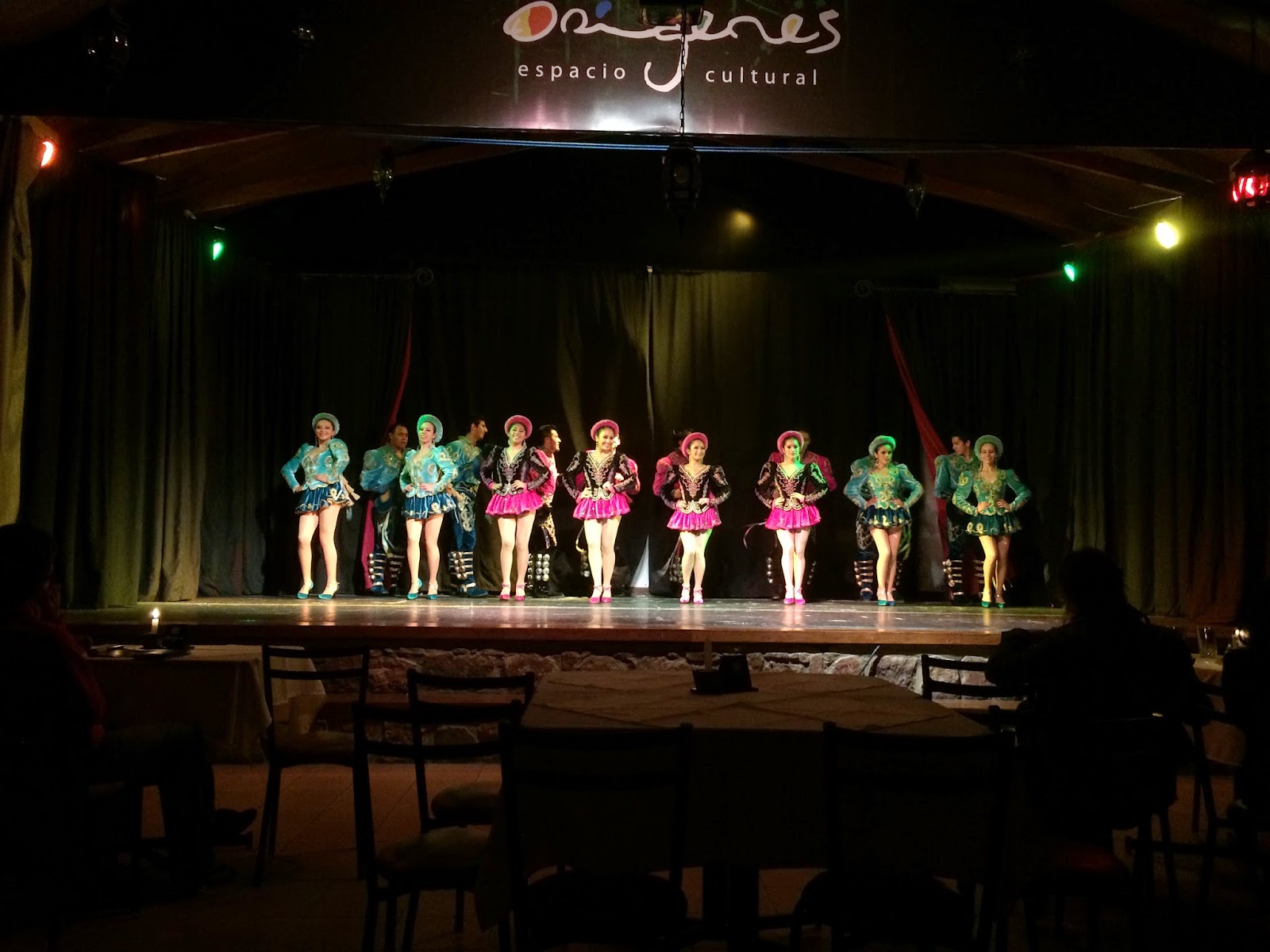 I particularly liked the Estampa Chaquena from the Bolivian Chaco region. It involved lots of footstamping and flowing skirts. 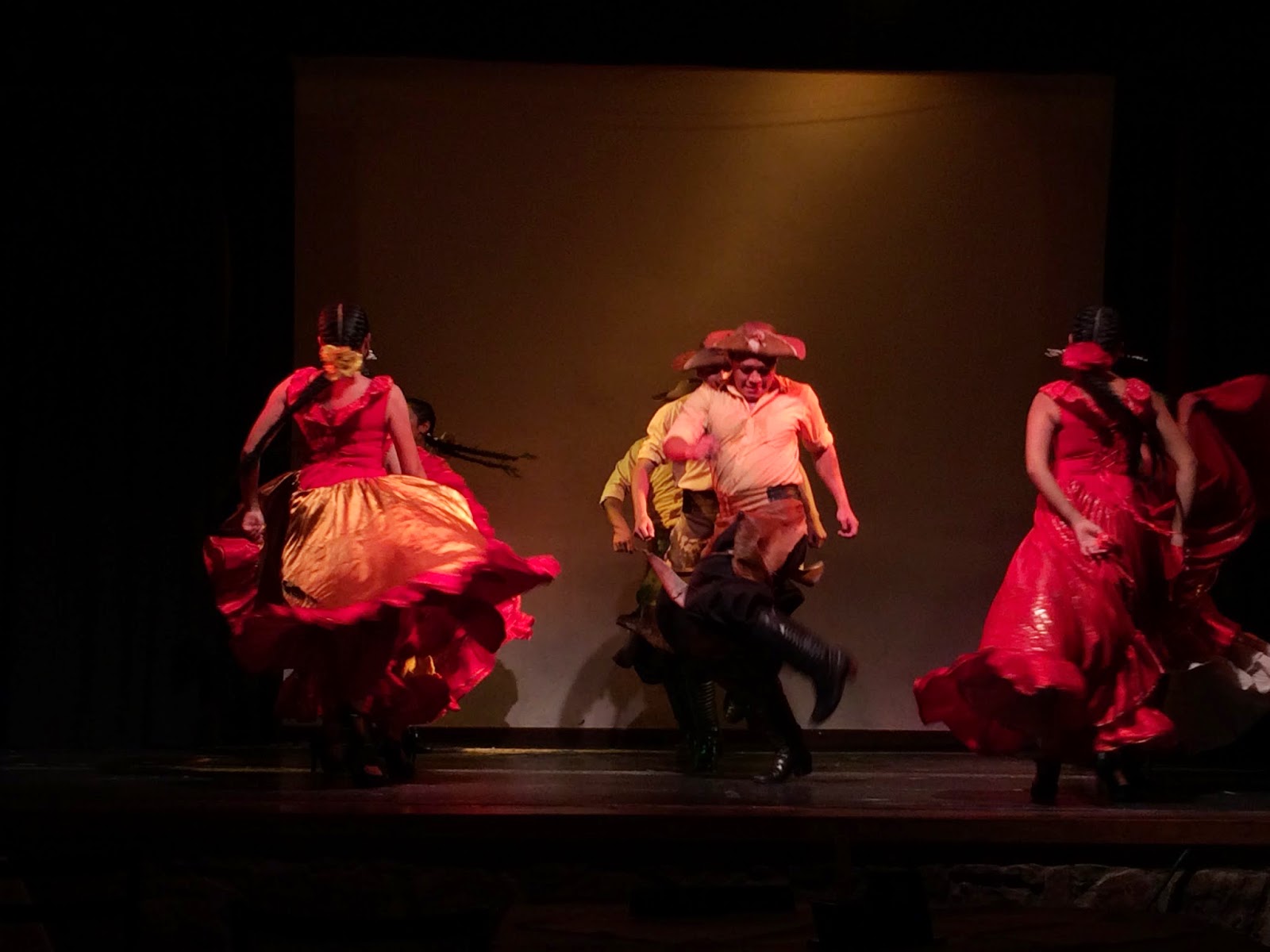 It was a very entertaining evening and it was really interesting to see all of the different types of traditional dress from different parts of the country, as well as the dances. And to top it off, Sarah also got to have a little dance on stage at the end of the night!

15. Sarah's birthday: Last but not least, it was Sarah's birthday while we were in Sucre. We spent a very enjoyable day horseriding, eating cake, drinking wine and eating dinner and drinking more wine - we found some very drinkable Bolivian wine that went down all too easily!

Have you been to Sucre? What were your highlights? What did we miss?
Posted by Sarah at 20:31