And into the jungle!

A trip to the Amazon basin is on most travellers’ bucket list. But it doesn’t come cheap. Our research showed us that Bolivia was one of the more affordable entry points into the jungle. In Peru, we met people travelling north from Bolivia – all of whom recommended different trips and tour companies.

We decided fairly quickly against a 'pampas' or wetland savannah trip, as although you have a higher chance of seeing animals, due to the lack of trees, there are few (if any?) reputable companies that take tourists there and we'd heard that the area gets overcrowded with tourists and their not so conservation friendly guides. We've spoken to people who very much enjoyed their pampas trip, but we decided it was not for us this time. 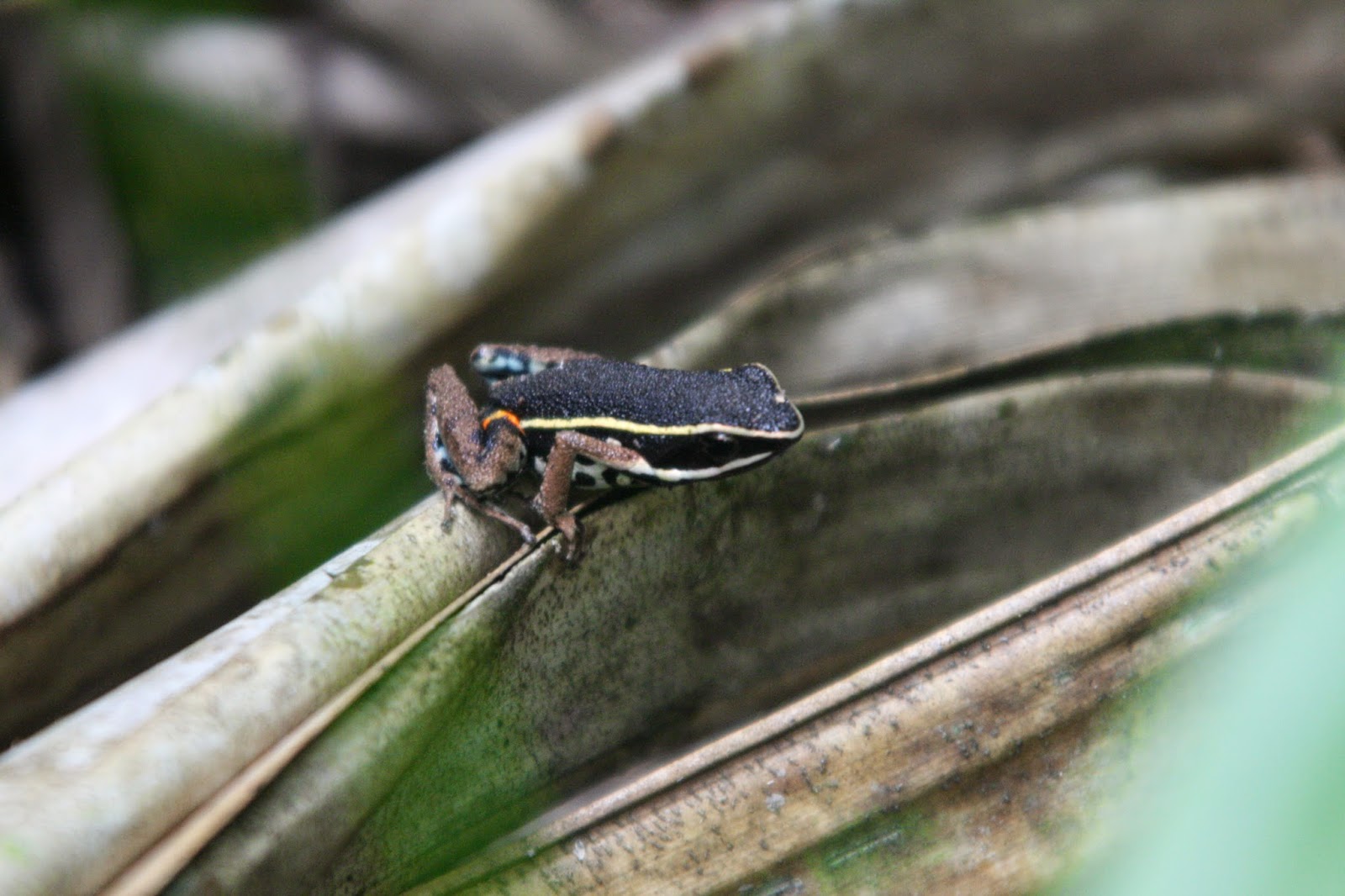 We'd heard good things about Madidi Travel and after some procrastination, we found their office in La Paz and so went in to find out more.

Madidi is the name of the main jungle reserve area in Bolivia. The founder of Madidi Travel, Rosa Maria Ruiz was a driving force behind the establishment of the park and set up one of the first ecolodges in the area. She then had a major falling out with the Government and administrators of the new reserve over the legality of her operations in the area. Relations soured significantly with the park rangers and with some of the locals and her first lodge was destroyed by a fire.

She subsequently bought land in an area outside of the original reserve, establishing a new protected area, called the Serere reserve.  Her story is really interesting and although it’s not entirely black and white, the passion that she and her company has for conservation is clear. You can read more here: www.earthisland.org/journal/index.php/eij/article/bolivia_burning

After speaking to the staff in the Madidi Travel office, we decided to go to the Serere Reserve for four days, three nights. We flew out of La Paz the following day and headed to Rurrenabaque, a sleepy town on the Beni river, which largely seemed to encompass tour agencies, hotels and restaurants. Back down at sea level, we were able to breathe freely again, even if it was rather humid and a little sweaty.

Our journey from 'Rurre' to our lodgings in the jungle was a relaxing trip 3 hours downstream in a small boat. Along the way we passed small settlements on the banks and a couple of fishermen but very little else. We arrived at a rather nondescript muddy bank. Climbing ashore, our guide pointed to prints in the mud, made by jaguar. Unfortunately, this was the closest we were going to get to seeing a jaguar over the next few days.

We walked off of the bank and into the dense jungle  beyond and headed up to the main lodge or “Casa Grande”. On the walk, we saw a tapir who likes to hang around the lodge in the hope of food.

At the Casa Grande, we were introduced to a baby capybara, who was rescued by locals, after the recent floods killed the rest of his family. The staff fed him to begin with to keep him alive, but are now trying to get him accustomed to living by himself. However, he doesn’t seem quite ready for this and was quite taken by sucking on tourists fingers and cuddling up to us.

The lodge also has a resident parrot that can’t fly. There is also a clever spider monkey who hangs around and periodically breaks in to steal food. We had to keep locking the door to keep him out, but he managed to break in a couple of times while we were there.

We established a clear routine during our time in the jungle. We’d awake every morning to the sound of howler monkeys and a chorus of insects and birds, pull on our wellington boots and head up to the main house either for breakfast or an early morning nature spotting excursion with our guide Roberto. Then we’d be out again after breakfast, be back for lunch and out again in the afternoon. 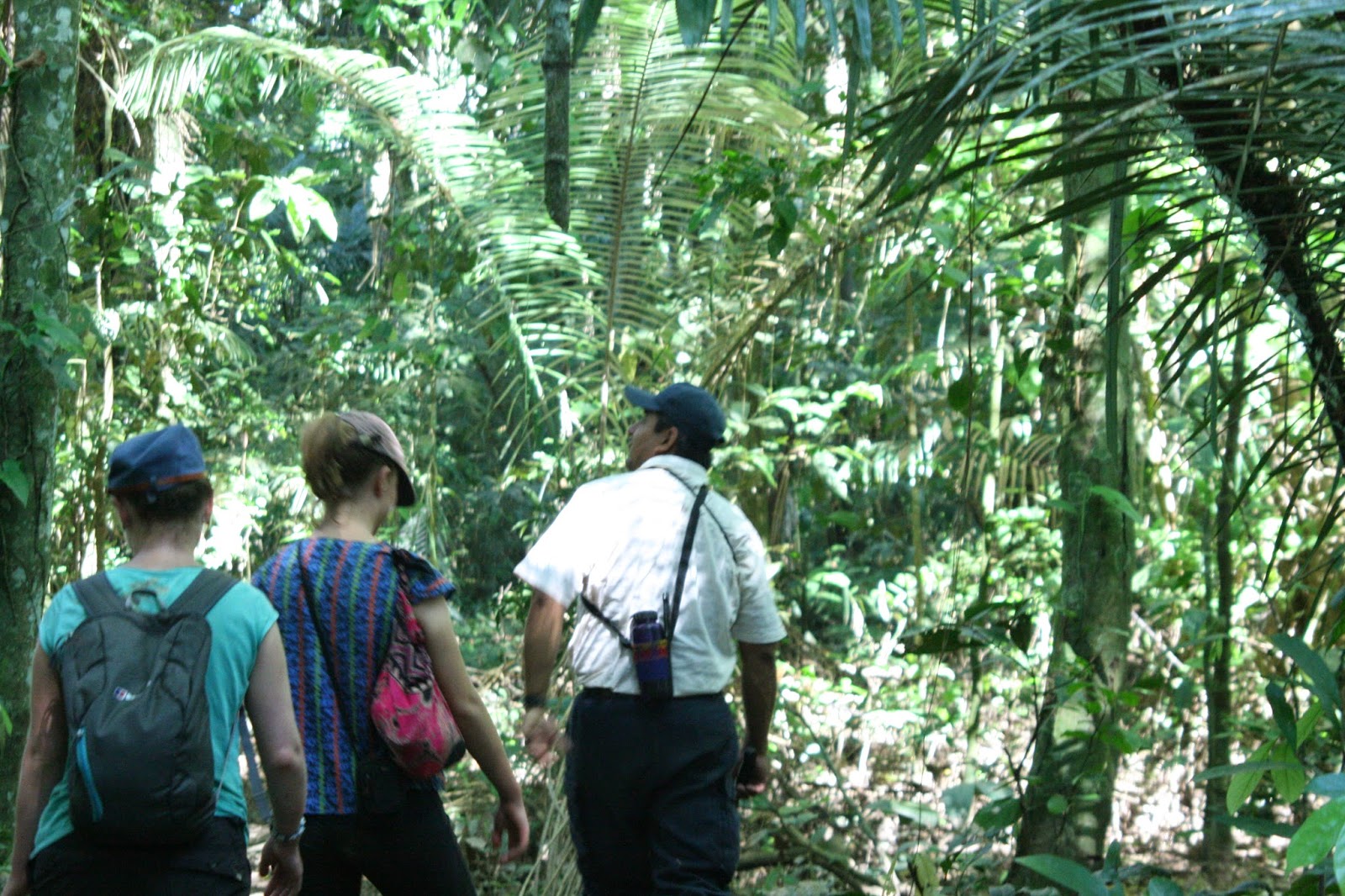 One morning, we took out a boat onto the lake next to the main house to go Caiman spotting. We got there just before sunrise, clamboured into the boat and paddled slowly around the lake, while our guide made guttural noises calling out to the Caimans. 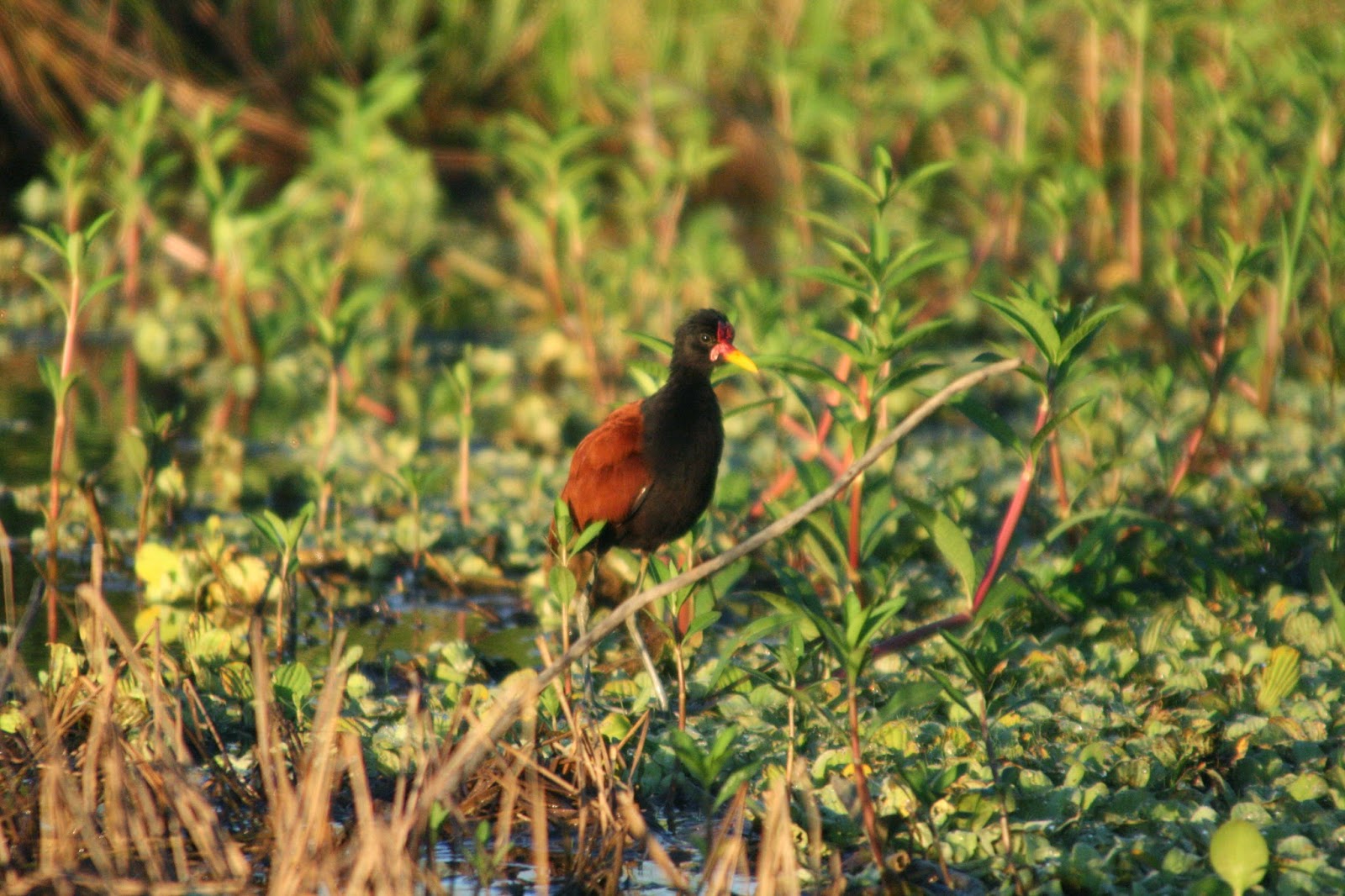 It was really peaceful and to begin with the stars were still out and were reflected in the lake as we slowly rowed around it. As the jungle began waking up properly, we saw a whole host of birds flying overhead, but only managed to spot one Caiman.

We tried again that night and it was a much eerier experience, particularly when we managed to see the red eyes of a couple of caiman in the light of our torches.

About an hour’s walk from the lodge is Gringo Lake, where there is an island with a family of rescued spider monkeys. We spent a relaxing hour with them as they climbed on our laps, shouted at us to follow them around or grabbed onto us and led us around the island. They were extremely cute and very entertaining.

A highlight of our stay in the Serere Reserve was a trip across the lake next to the main lodge to the plantation area where the staff grow fruit and vegetables to feed us hungry tourists. While we were wandering through the plantation, sipping fresh watermelon juices, directly from the fruit, we came across a group of squirrel monkeys swinging in the tress above us. They were very shy, but also quite curious and so while we stopped to watch them moving overhead, a few stopped to peak down at us below them. It was an incredible sight. 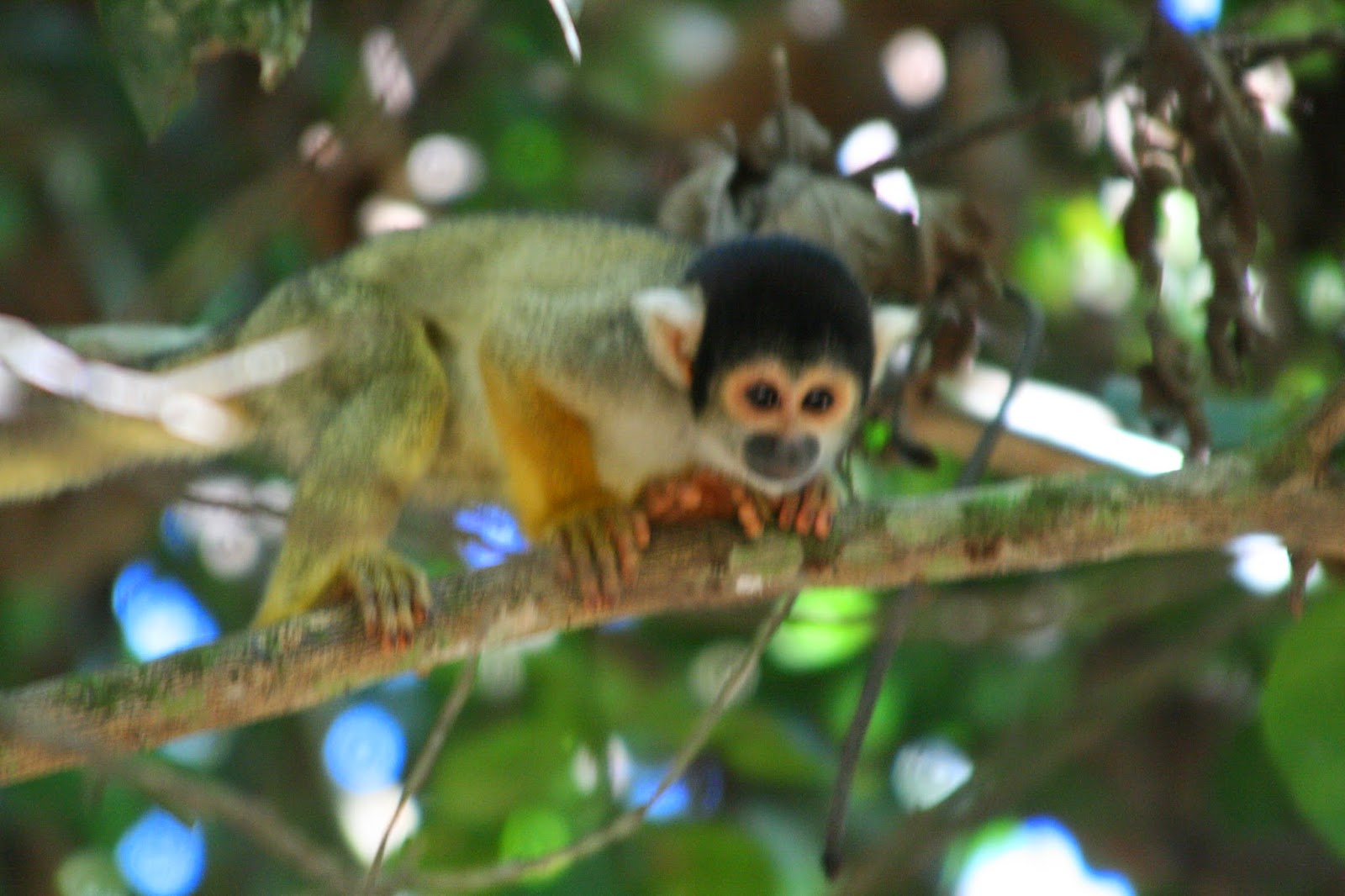 Our sloth spotting expeditions were unfortunately fruitless, but we did manage to see a wild tortoise chilling out/hiding in the undergrowth. 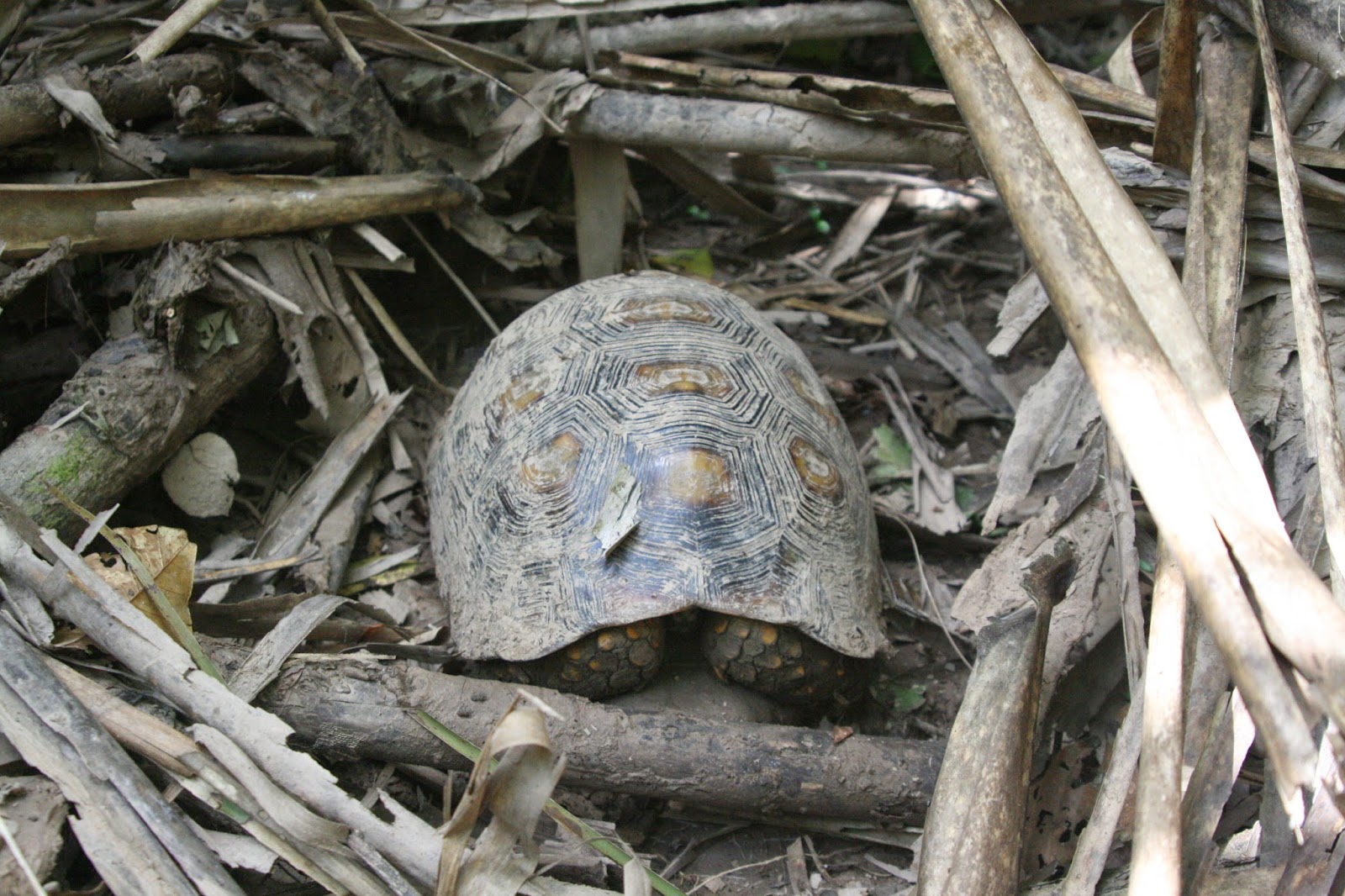 The jungle was teeming with other life too, from tarantulas (that needed a lot of encouragement to be coaxed out for a photo) and other spiders, to lots of different types of frogs, to caterpillars and butterflies and even bats that lived inside the trunk of a tree. 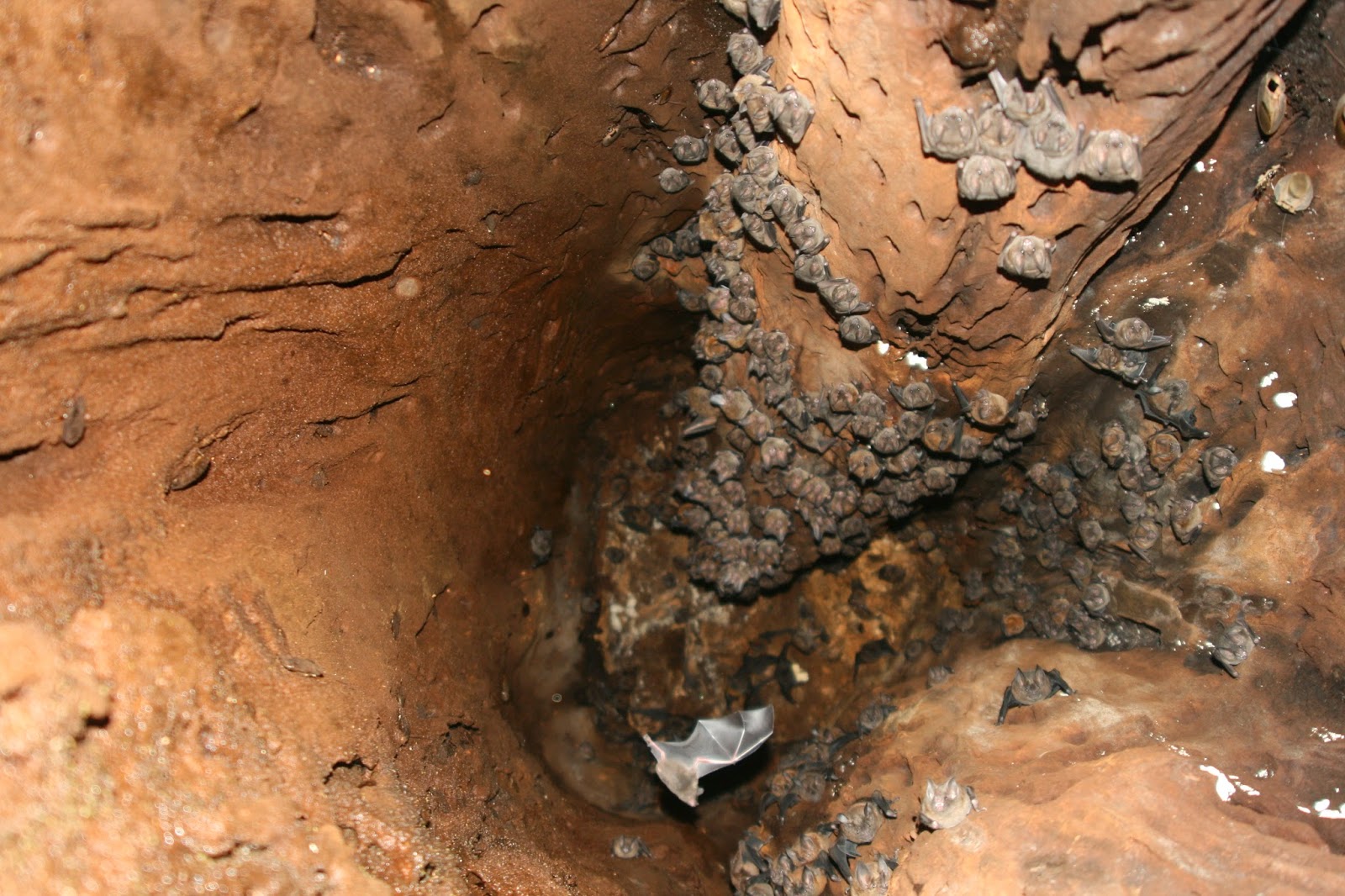 And all too quickly, we found ourselves back at the nondescript muddy bank and on the boat heading upstream this time, back to sleepy Rurre, before flying back to the heady heights of La Paz.

We enjoyed our brief visit to the jungle. It was sweaty and despite the amount of repellent I slapped on, mosquitos still seemed to feast on my legs, but it was a fantastic opportunity to see monkeys and other animals up close in their natural habitat. 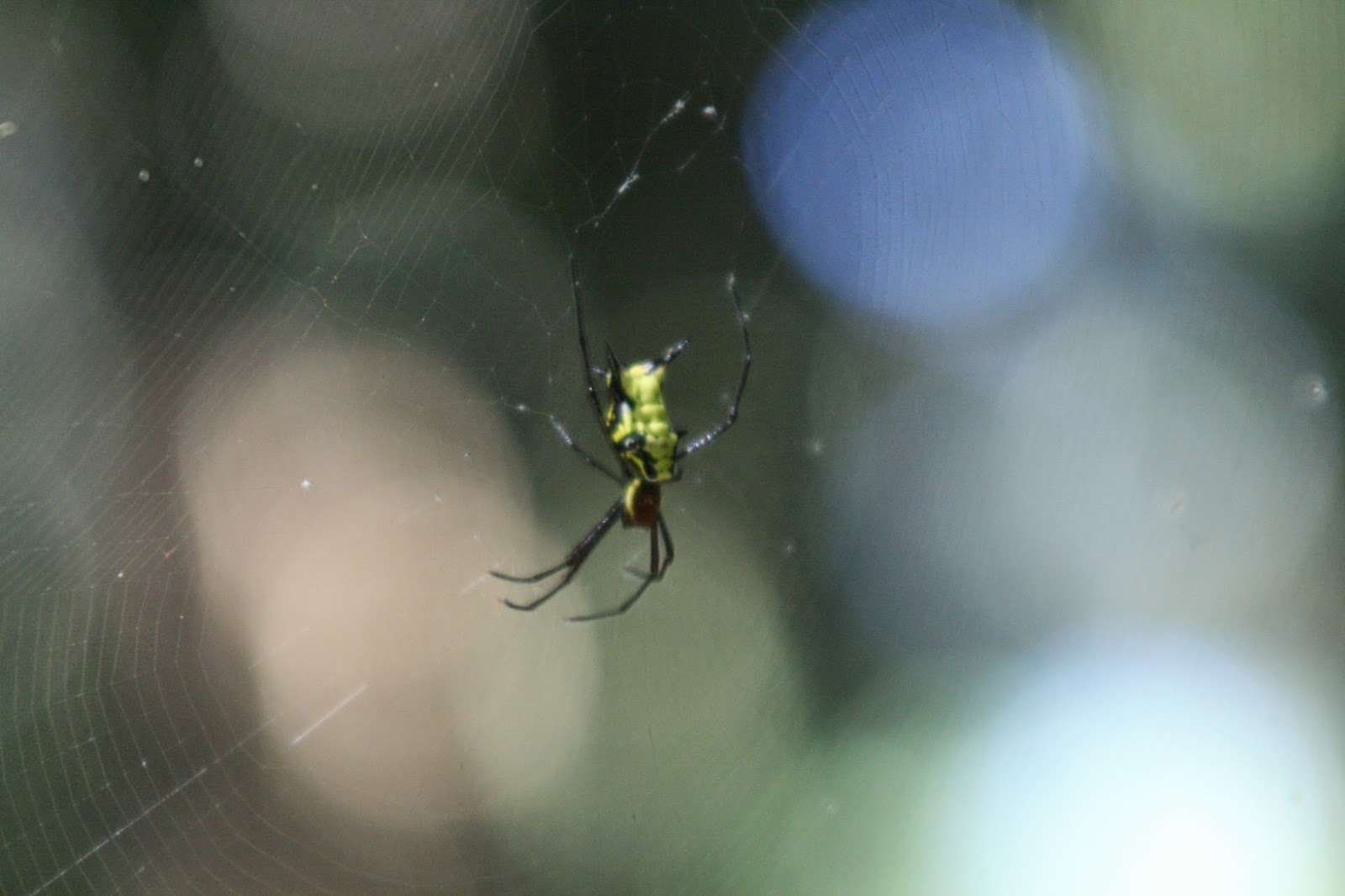 Have you been into the Amazon basin? What was your experience? Did you see any sloth?

Related posts
La Paz: In pictures
The world's most dangerous road
Our quest to visit a pena
Highlights of Sucre
The highs (and lows) of our visit to the Bolivian salt flats
Being vegetarian in Bolivia
Where we stayed - Bolivia