The world’s most dangerous road

Before arriving in South America, I had read about the so called 'death road' in Bolivia, which according to Wikipedia claims up to 300 lives every year. I watched youtube videos of buses travelling along very narrow stretches of road, with sheer drops of over 600 metres. It looked horrible.

Then I started to read that it had become a bit of a tourist attraction. Travelling down this road where so many people had lost their lives for a thrill, seemed very macabre. I decided that I really wasn’t interested in going.

However, the closer we got to La Paz, the more we met people who had cycled down it. All had survived to tell the tale and most (!) recommended that we go.  We researched the different agencies that ran tours down death road. After much deliberation, we booked a trip with Gravity, who have a reputation for having great equipment and good guides.

Up early on the day of the tour, we met with the rest of the group and along with our not one, not two but three guides, we clamboured into the bus and headed towards La Cumbre and the start of the ride. Our main guide Moe, put us immediately at ease describing the route and the plans for the day.

Arriving at the start (4,700 metres above sea level), we tested out our bikes and gave an offering to Pachamama, before starting the first bit of the ride, which happily is paved, allowing us some time to get used to the bikes.

Speeding down the road and looking out at the beautiful landscape around us felt fantastic and I was pleased we’d decided to come. However, I was a still a little nervous about what awaited us, once we got on to death road proper.

It was cloudy when we got to the beginning of the real death road, which added to the mystery of the place. It also meant that we couldn’t see the extent of the drop below us, which perhaps gave us a bit more confidence than we would have otherwise had!

It stayed quite cloudy and misty at the top, but as we descended, it became warmer and much clearer, so we could enjoy the stunning views of the Yungas valley below. 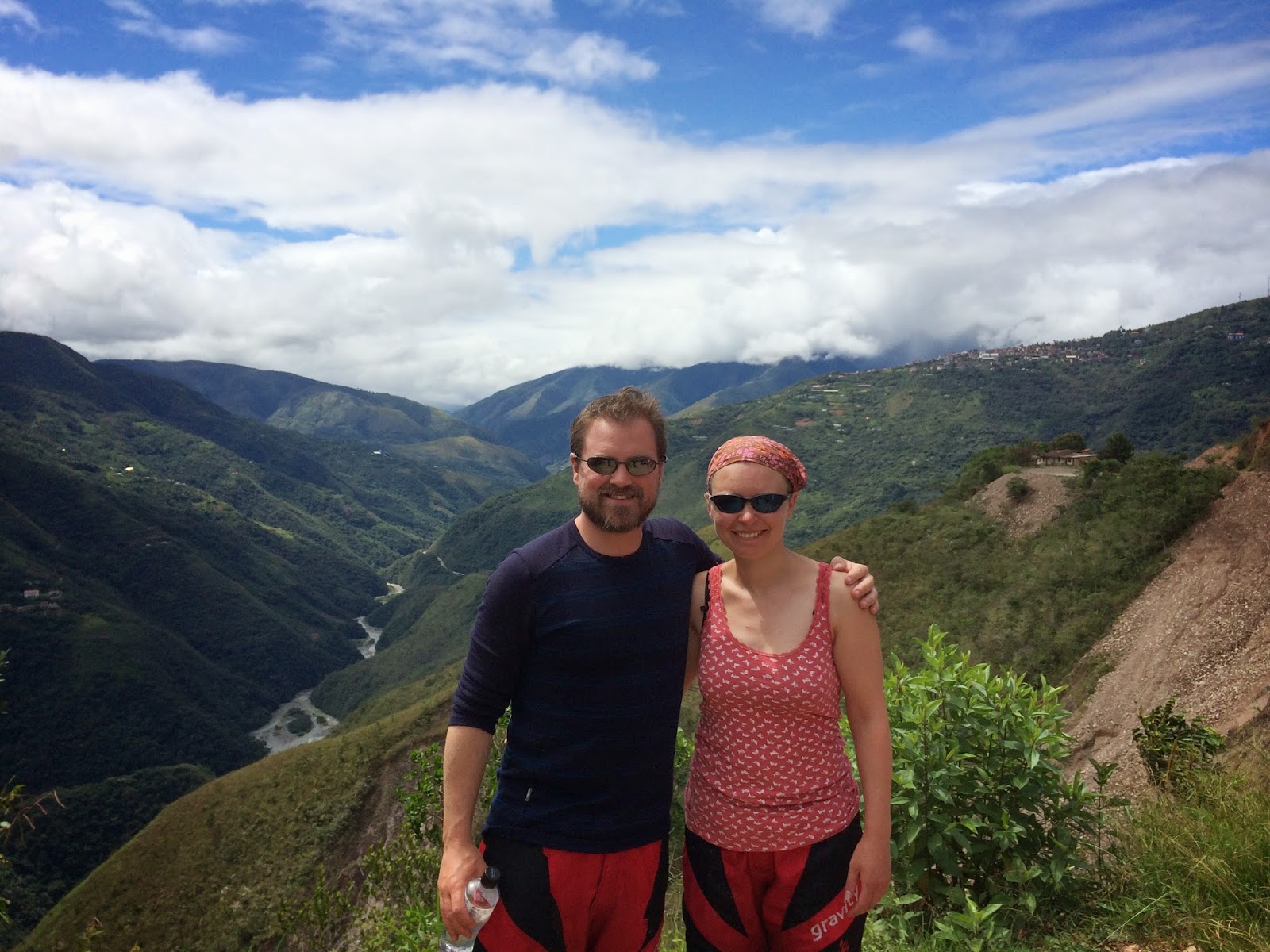 I grew more confident on the bike and we enjoyed splashing through the waterfalls that come directly onto the road.

It was a beautiful ride down, but certainly seemed much more of a pathway for bikes rather than a road for trucks and buses. A new road has now been built meaning that largely the only people that use this road are mountain bikers and their support vehicles.


The crosses we passed along the way served as a stark reminder of all of the people who had died on this road, when their vehicles had gone over the edge. We were also told the story of the most recent cyclist who had died here, after going over the edge while trying to take a selfie.  We made sure we stopped when we wanted to take photos!

After a refreshing beer at the bottom, James and I and another couple decided to go on the Flying Fox zipline that passes across the valley. We were treated again to amazing views as we zipped from one side to the other.

We then headed to La Senda Verde Animal Sanctuary, where we enjoyed a hot shower and a filling lunch, before heading back to La Paz. Others in our group went for a tour of the sanctuary, but as we’d re-joined them a bit late post our ziplining, we decided to relax a little while longer in the restaurant.

We then headed back up the death road in our support vehicle and happily met nobody coming the other way! We had to get out at one point to allow the driver to navigate a particularly tricky section alone.

The ride was incredibly enjoyable and the ride level of thrilling! Nobody in our group fell off and I didn’t see any injuries in other groups either, although I have heard of some nasty accidents (but no falling off the edge) as we have talked to other travellers on the way. We would definitely go again.

What about you? Have you ridden the death road? Did you enjoy it? Would you go again? 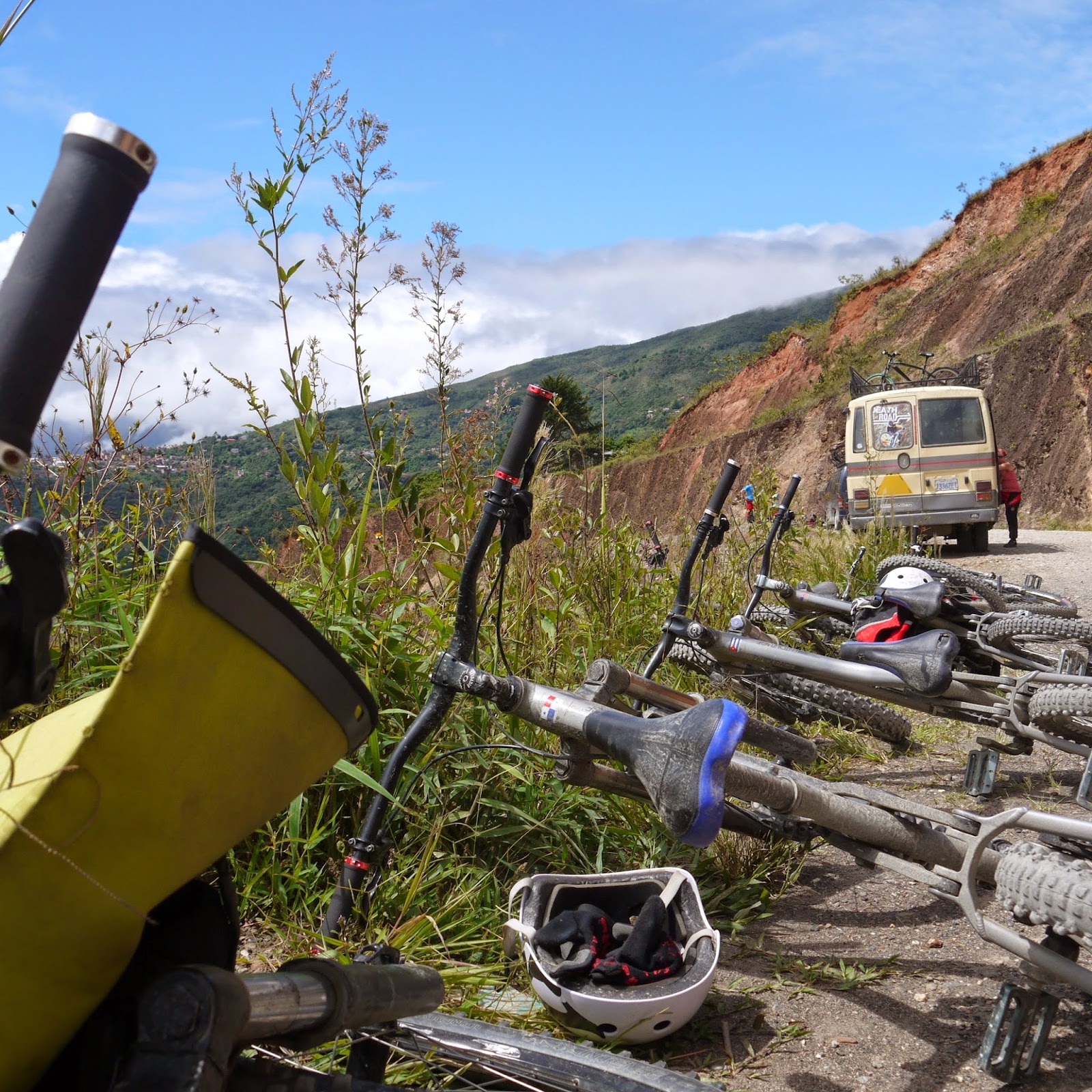