Arrival
La Paz is quite literally breathtaking. At an elevation of between 3,200m and 4,100m above sea level, even a leisurely stroll around the city centre can leave you feeling short of breath. Most people arrive into La Paz from El Alto, which is actually another city in itself, growing fast into the flat plains above the capital.  The view of La Paz as you travel into the city from ,El Alto, is incredible. 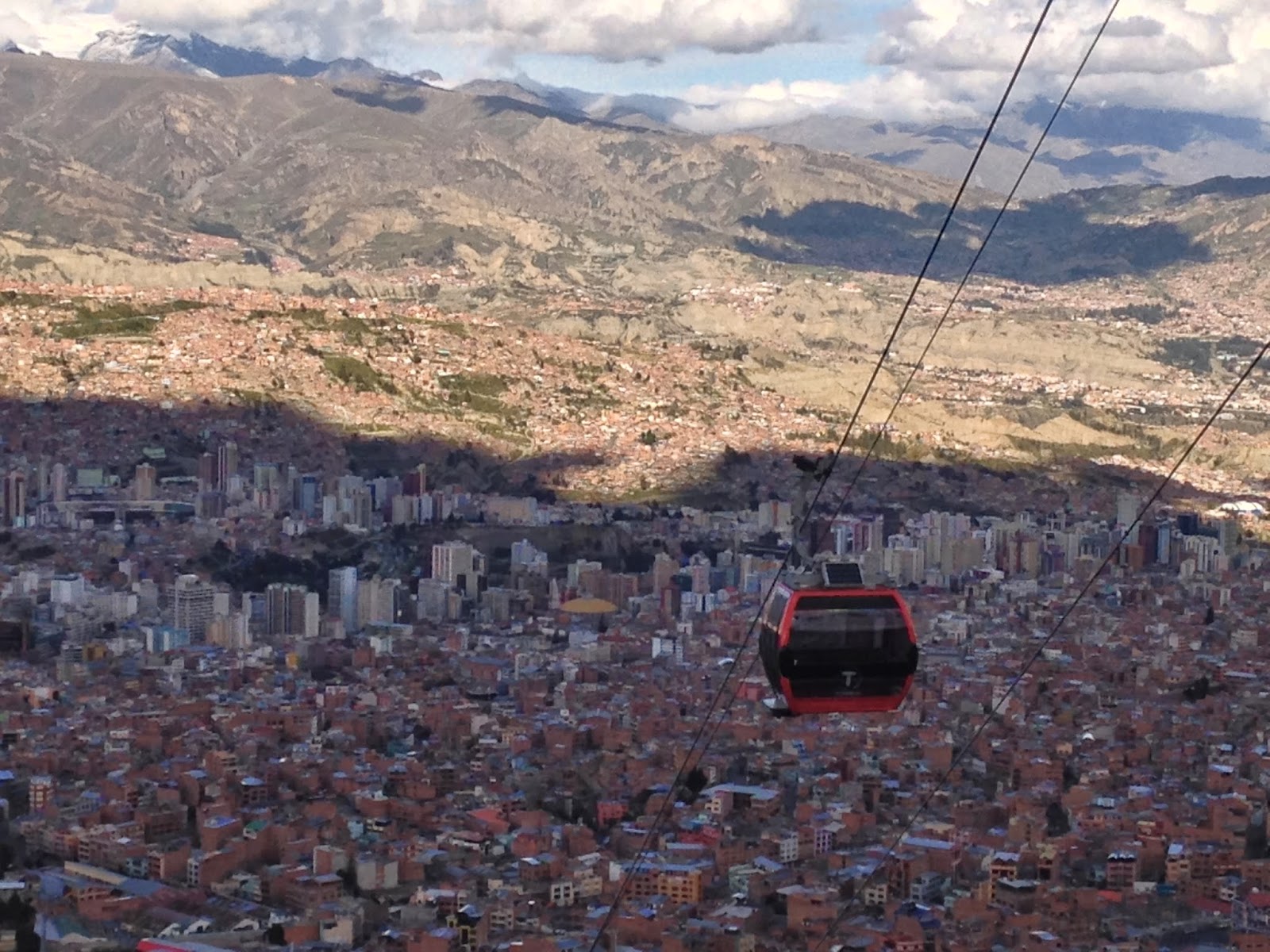 The cable cars are a new addition to the city intending to provide a quicker and more efficient route into the city than the blocked roads from El Alto at rush hour.

The world’s weirdest tourist attraction?
For years, La Paz was known on the South American Gringo trail as the place where you could visit “that prison”. Made famous by the book Marching Powder, which tells the story of a British cocaine smuggler, San Pedro is like no other prison.

Inside, it is like a town within a town. On arrival, prisoners have to buy their own cells, which are more like apartments than cells (although this depends on how much money you have to decorate!). Prisoners' families (including children) live with them inside the prison (although they are free to come and go) and prisoners run their own businesses, including shops and restaurants to serve other prisoners and earn money to pay for their day to day needs.

By bribing the prison officers, tourists could get inside the prison and could tour the prison with one of the inmates. These tours were never really legal and you always ran the risk of arrest for bribing an official. However, in recent years the authorities have really clamped down on these visits and there are reports that the prison is due to close. We didn’t hear of anyone who had got into the prison on our travels through Bolivia, although I’m fairly sure I glimpsed a Gringo-looking group getting in one morning as we walked past. We didn’t try. I did read the book though and it gave a fascinating insight into what goes on in San Pedro.

What to do on a Sunday night in La Paz? Why go and watch the “Fighting Cholitas”, battling it out in the ring in El Alto of course!  Wearing the traditional clothing of the indigenous population of El Alto (and elsewhere), including bowler hats, layered skirts and plaited hair, this group of female wrestlers fight it out in the ring alongside their male counterparts. The fighting style is much like lucha libre in Mexico or WWF (although slightly less polished!) and makes for an entertaining evening.


The witches market
Religion in Bolivia is a curious thing. The people are avid Catholics, but also still adhere to many older traditions of giving praise and offerings to “Pachmama” (mother earth). In the Hechicería (witches market) in La Paz, you can buy all kinds of items to burn, bury or otherwise use as an offering to Pachamama in order to attract love, money or luck. The weirdest things available are llama foetuses, which are used as an offering if you are building a new house. 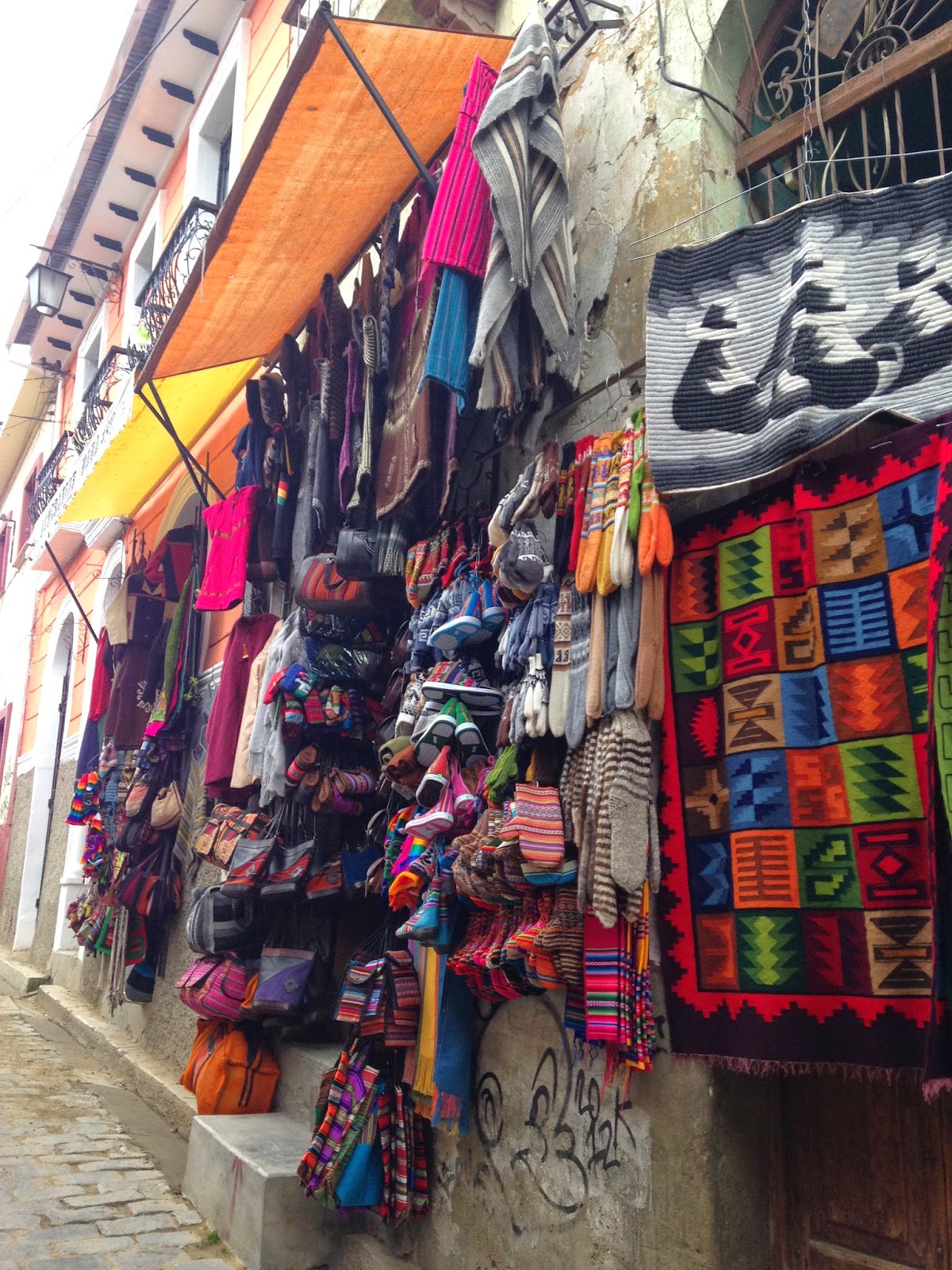 La Paz is basically one big market. From clothing to a range of souvenirs, to food and streets lined with potato sellers or tomatoes, you can easily lose a day or two shopping. We bought the compulsory llama jumpers – part of the Gringo uniform if you are travelling in South America. 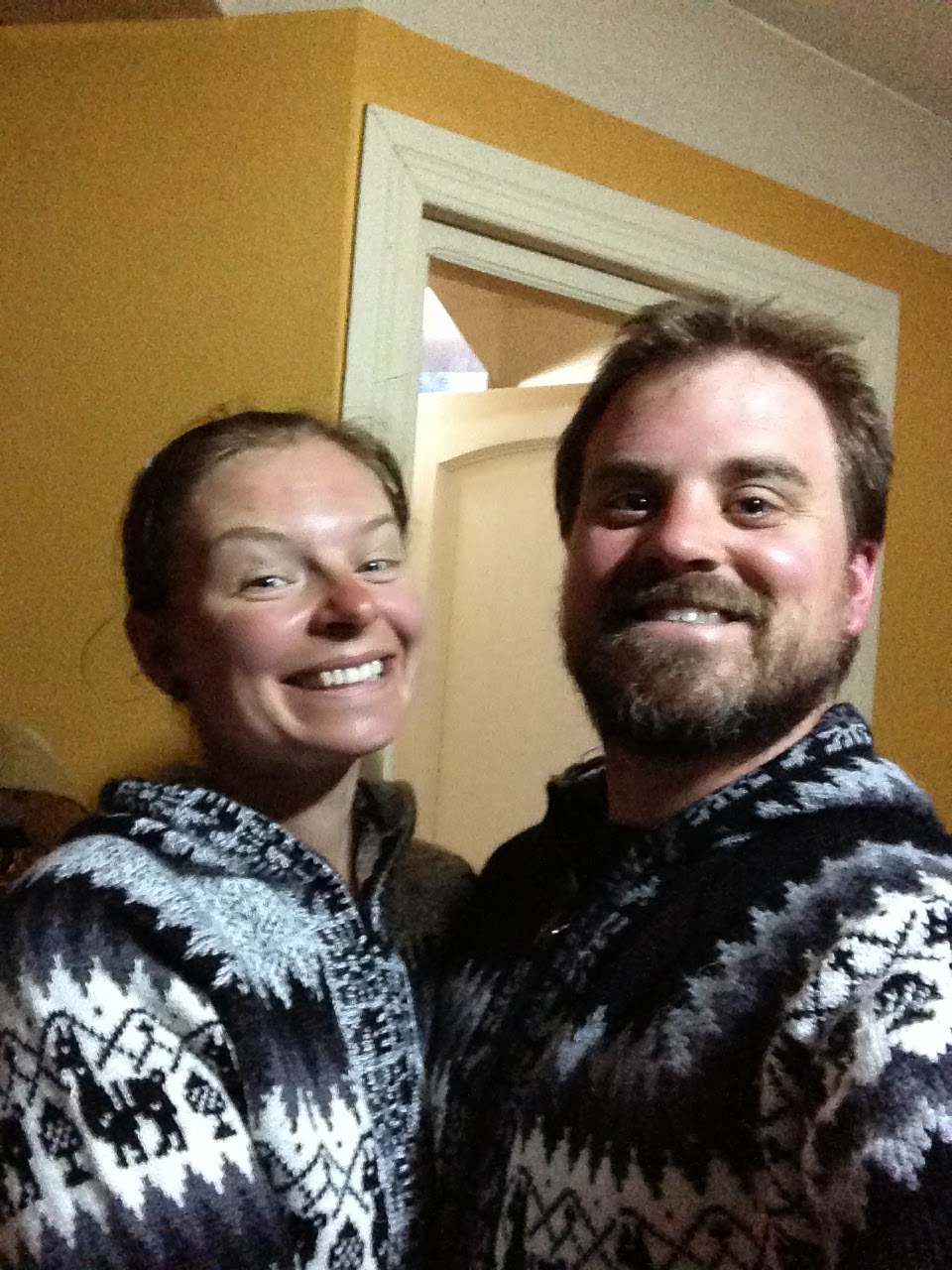 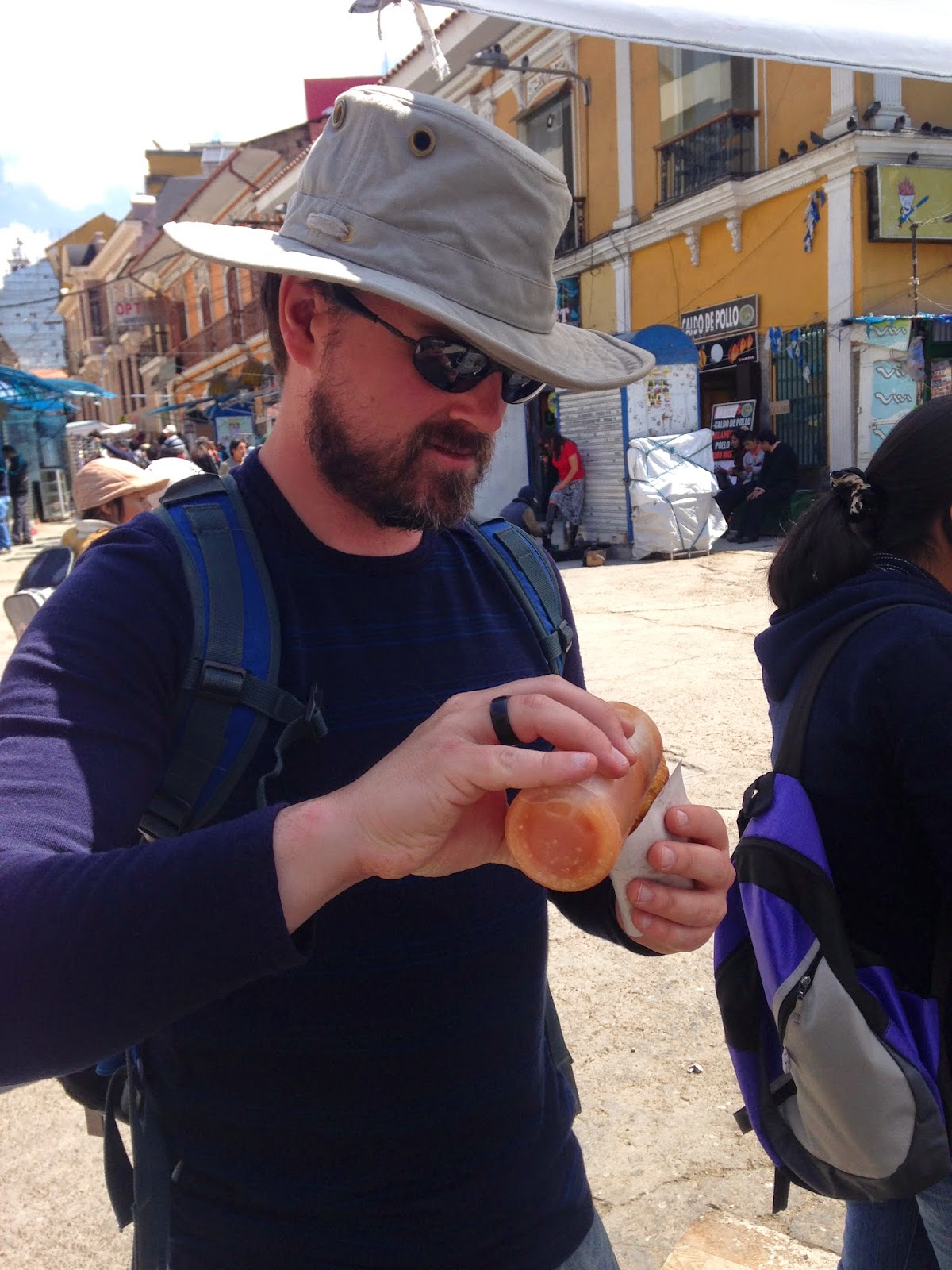 We loved trying the street food in La Paz. From tucumanas to salteñas to empanadas as well as sweet pastries it is easy to fill yourself up on these treats.  And even better, it was possible to get vegetarian versions of these traditional snacks. It is usual to stand at the tucumana stall while you are eating, so you can sample the range of sauces available.


Around 10 kilometres from the centre of La Paz, easily reached by bus or taxi, lies the surreal landscape of the Valle de la Luna or valley of the moon. The locals have named some of the rock formations based on their shape e.g. lady’s hat. We had the area almost completely to ourselves and were serenaded with panpipes as we strolled round the site. 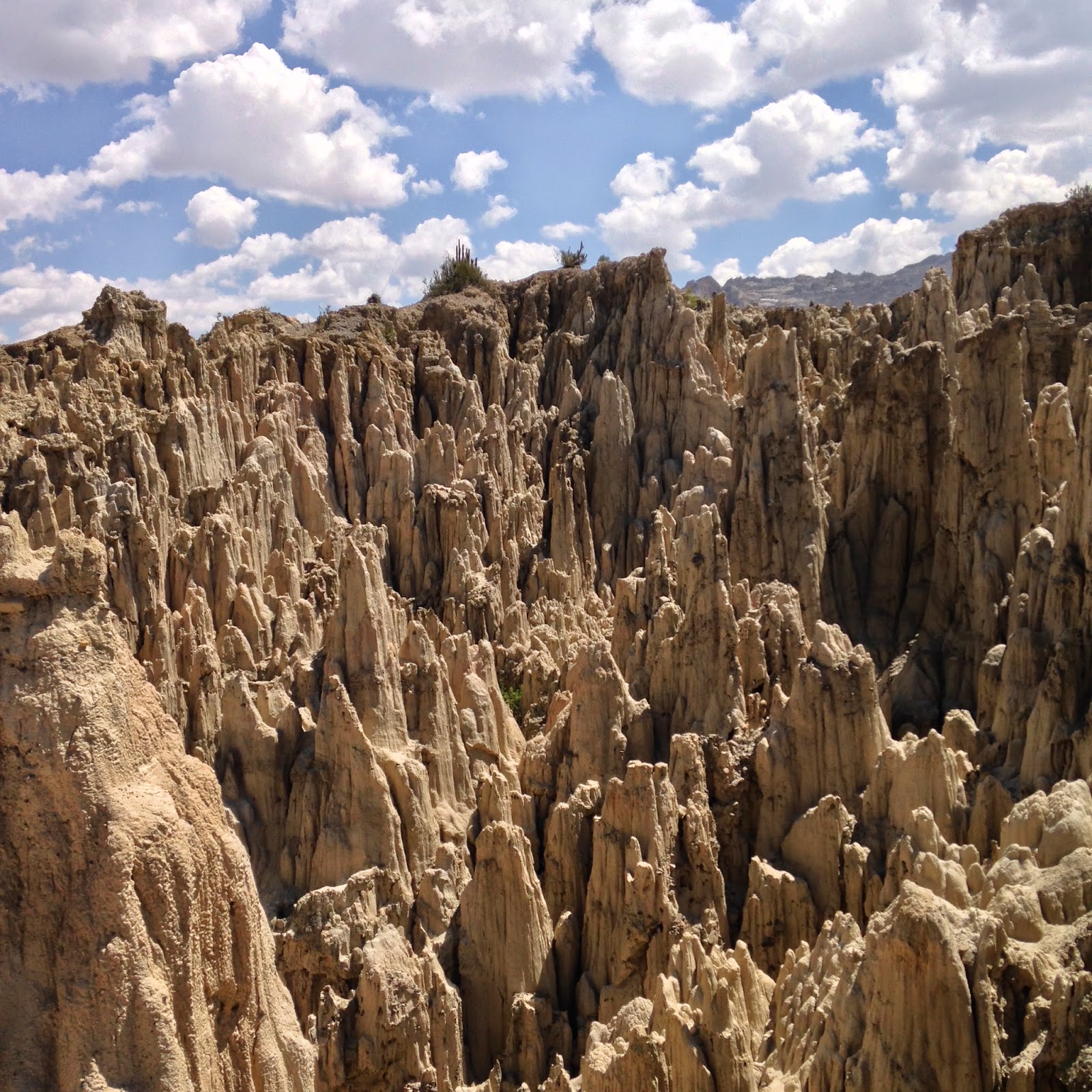 Viewpoints, parks, plazas and the streets of La Paz

We spent a fair bit of time of our time in La Paz, wandering the streets, relaxing in the plazas, strolling in the park and admiring the buildings and architecture. We particularly enjoyed strolling up Calle Jaen and our late afternoon walk through the Parque Urbano Central.

Have you been to La Paz? What were your best bits?