Being vegetarian in Chile

Arriving in San Pedro de Atacama over the salt flats from Bolivia, we were pleasantly surprised to find a town in the middle of the desert stuffed with a range of good restaurants - all of which had tasty veggie options, which is not always guaranteed in South America.

Aside from trusty (and yummy) pizzas, the options were quite varied too, including quinoa risottos, stuffed peppers and stir fries. Just walk up and down Caracoles - the main street in town - and take your pick! Be warned
though, if you have come from Bolivia, the much higher prices in Chile might give you a bit of a shock (and San Pedro is also a little pricier that other places in Chile).

In San Pedro, we were also introduced to the generously sized of the Chilean empanadas. Empanadas are baked or fried pasties that you can find across South America, mostly filled with meat, but you can usually find vegetarian options too (mostly cheese).

They vary from country to country and the Chilean version is huge - one is more than enough to fill you up at lunch time. This tasty empanada was filled with cheese, basil and tomato and can be bought from a small shop on the main street.

Outside of San Pedro, it was a little more difficult to find good vegetarian options. The empanadas seemed to be mostly fried, with the only veggie option being cheese and Chilean specialties, such as chorrillana, are very meat centred.

James tried chorillana - which I nicknamed heart attack on a plate - in Valparaiso. It is basically, chips, strips of beef, egg and onions.

For pescatarians, like in Peru, ceviche - a raw fish dish - is very popular in Chile. I managed to find a vegetarian ceviche in a restaurant on the main square in Pisco Elqui. Essentially this was a bean and vegetable salad served in a ceviche-style lemon dressing. The lemon was a little overpowering and I was somewhat disappointed.

However, I have heard from other vegetarians that done well vegetarian ceviches are actually very tasty, so it is one to look out for.

There are a splattering of vegetarian restaurants throughout Chile that are worth a look. In La Serena, with the help of Happy Cow, we found Ayawasi Organico y Natural. It was a sweet little restaurant, with a great selection of vegetarian meals and craft beers. La Serena didn't seem to have much in the way of nice restaurants with veggie options, so I was very pleased to find Ayawasi. 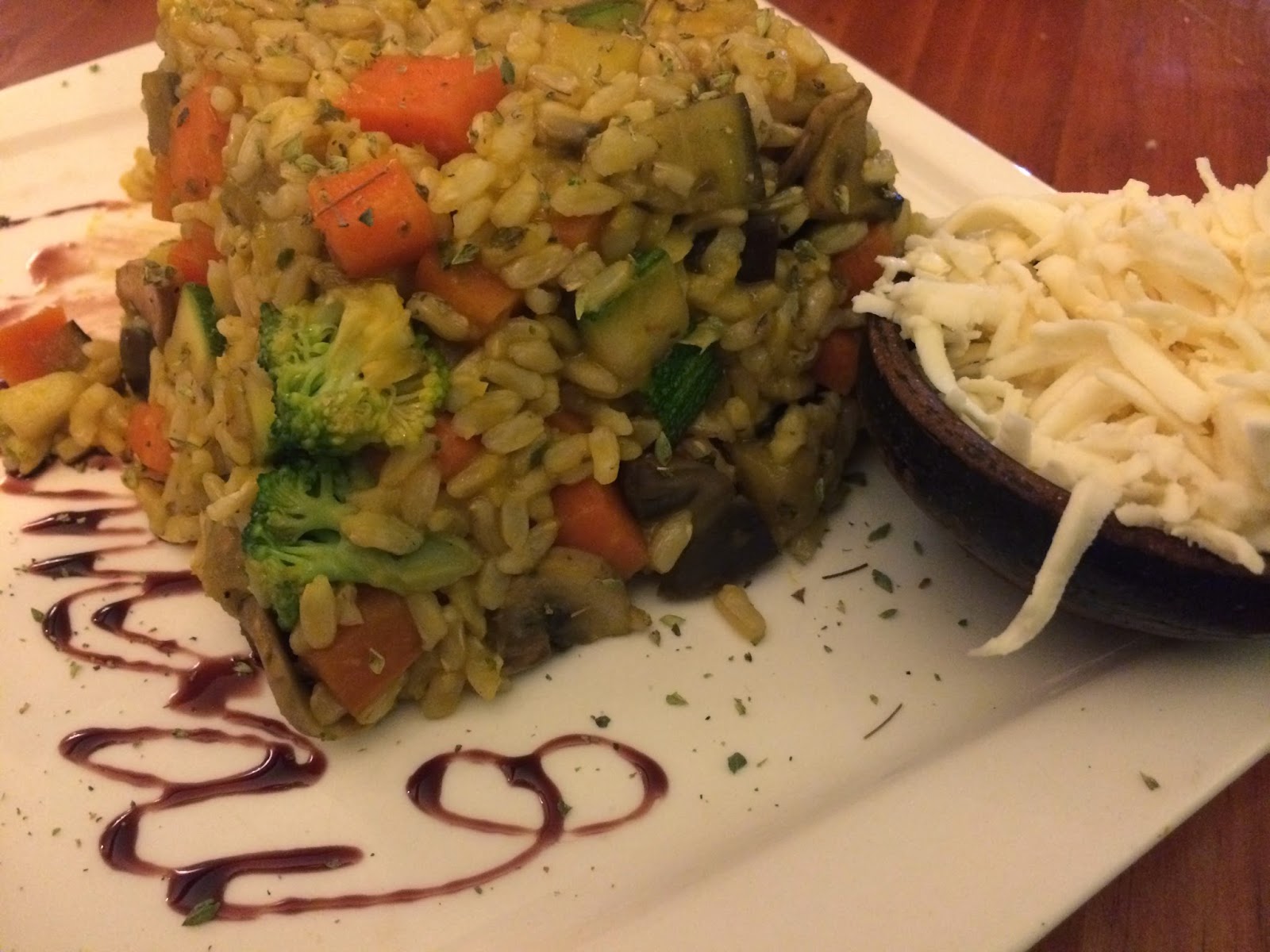 A Chilean cookery class
Wanting to experience more authentic Chilean food that I actually could eat, I found a Chilean cookery class in Valparaiso. I contacted Chilean Cuisine and they said that they could very easily adapt the recipes they made in their classes to make them vegetarian. 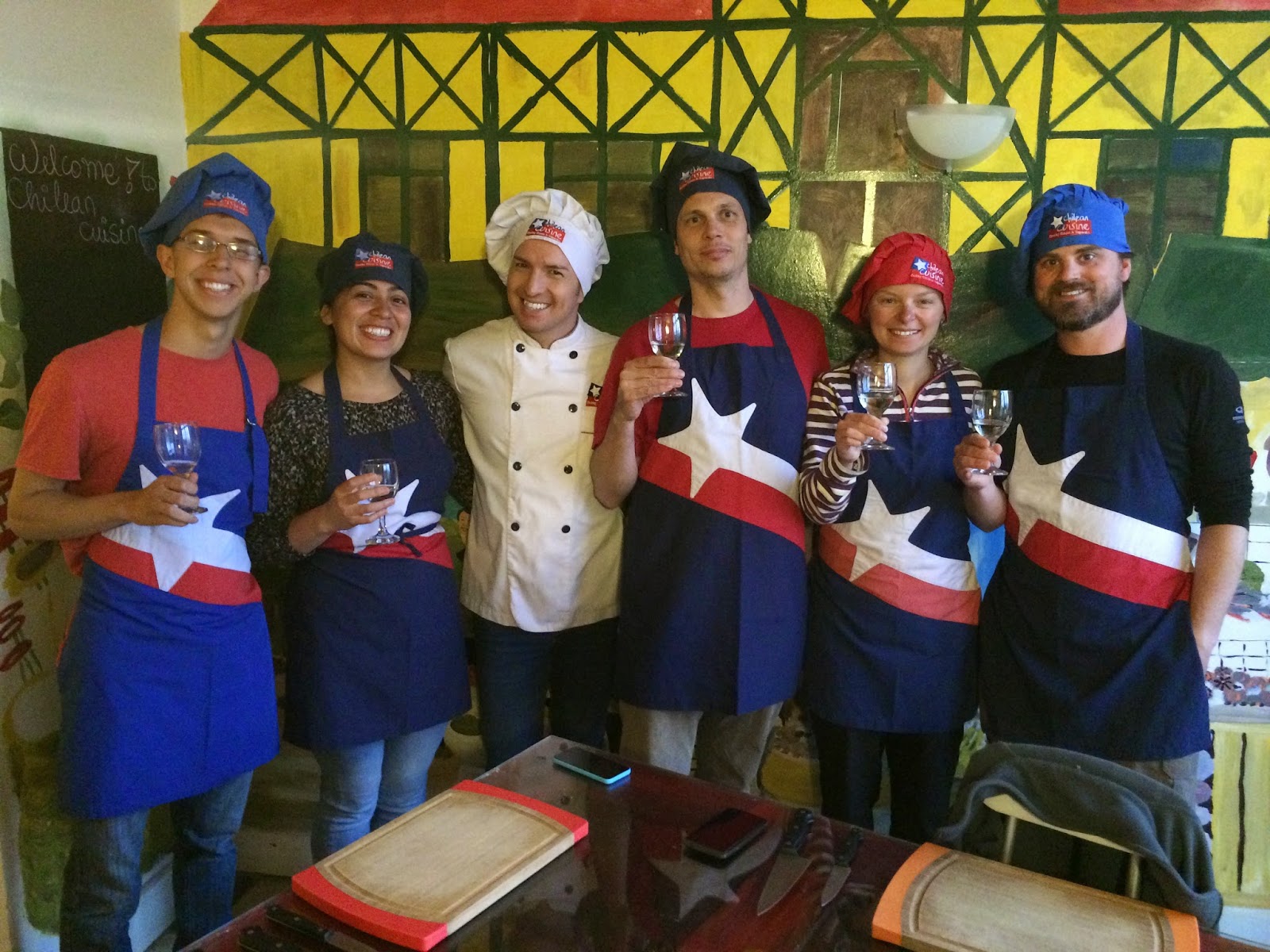 We met with our eccentric teacher Boris in a cafe in central Valparaiso and headed to the market to buy our ingredients. 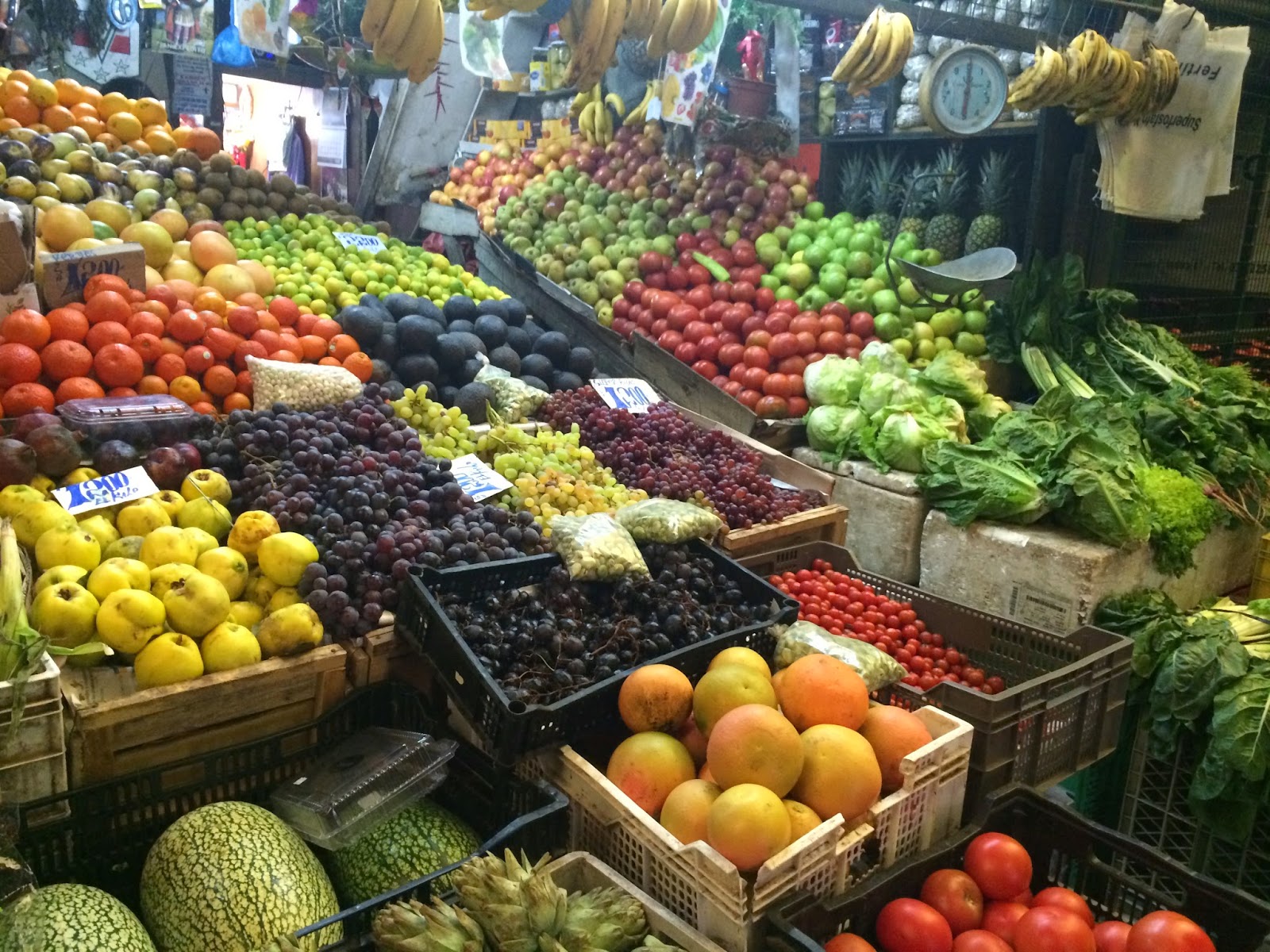 Our starter was going to be stuffed avocado. The market holder selling avocados gave us a taster, while Boris was paying. This was the creamiest avocado I have ever eaten. It was delicious. 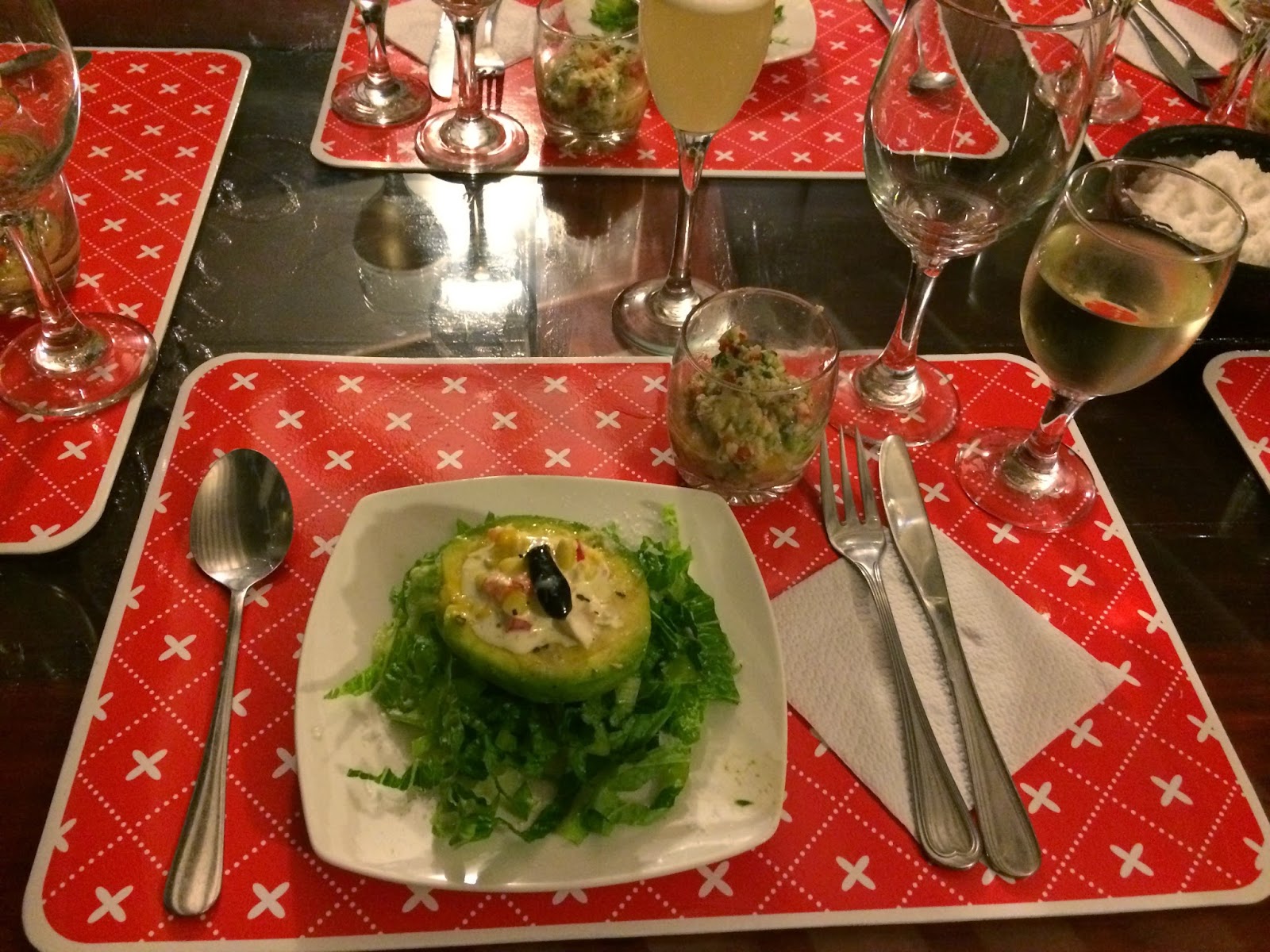 Also on the menu was Pastel de Choclo, a traditional pie baked in earthenware pots, with a sweetcorn crust topping. The crust is made by grinding the corn kernels in a food processor and mixing with milk and basil. The pie usually has a meat, raisin, egg and onion filling. For the veggie version, we replaced the meat with courgette, but other vegetables would also work.

We also turned our hand to making empanadas and were able to experiment with different fillings. 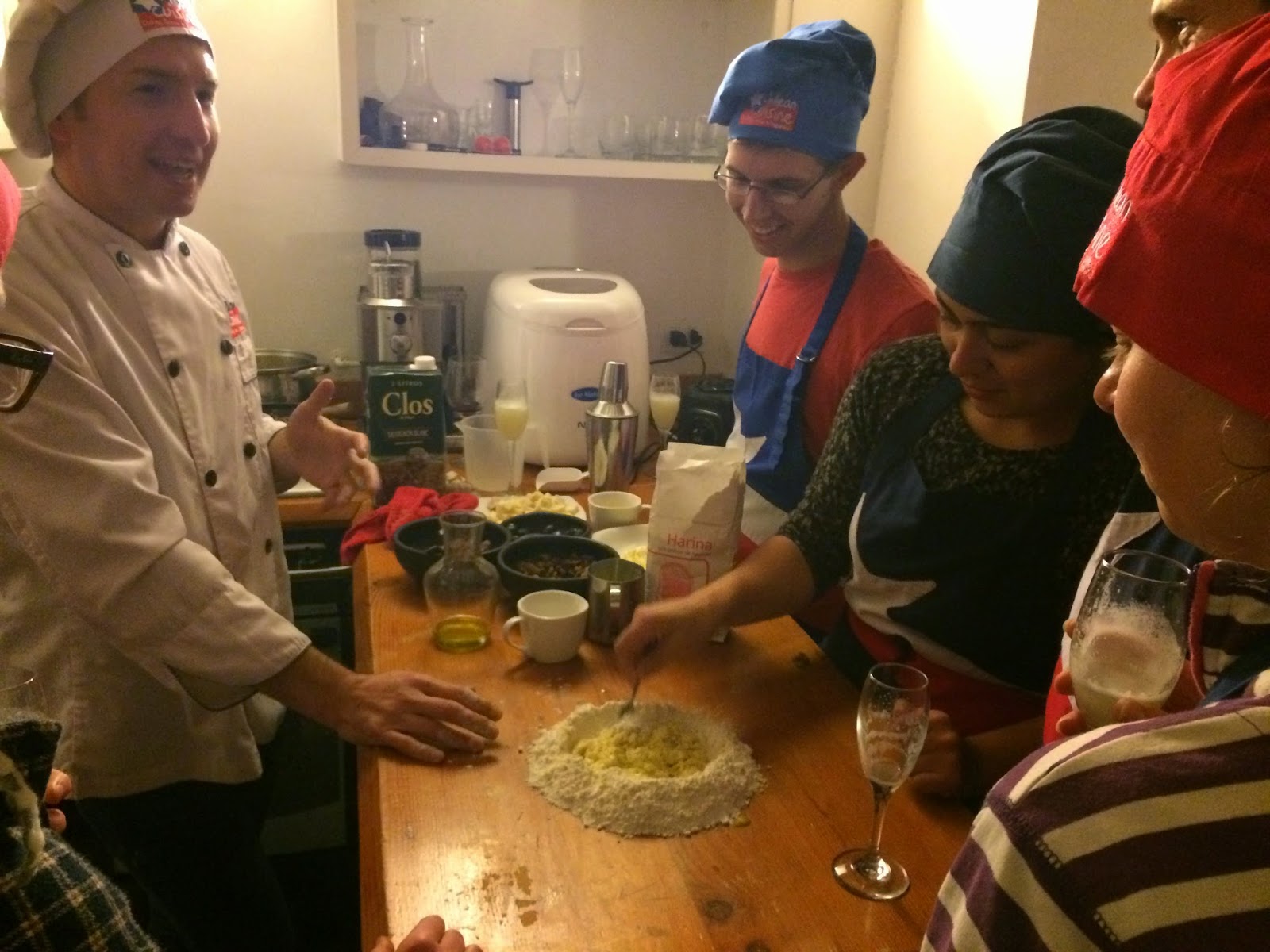 Pebre - a smoky and spicy tomato salsa - usually makes an appearance on your table with every meal in a restaurant in Chile. With Boris, we learnt how to make the salsa with a spice blend called merquén, traditionally used in cooking by the indigenous Mapuche people. A smoky chili pepper is ground and then toasted before being mixed with coriander to make the merquén.

A Chilean evening would not be complete without some Chilean wine and Pisco sours. By the end of the night, Boris had us mixing our own Pisco sours to some Chilean music. 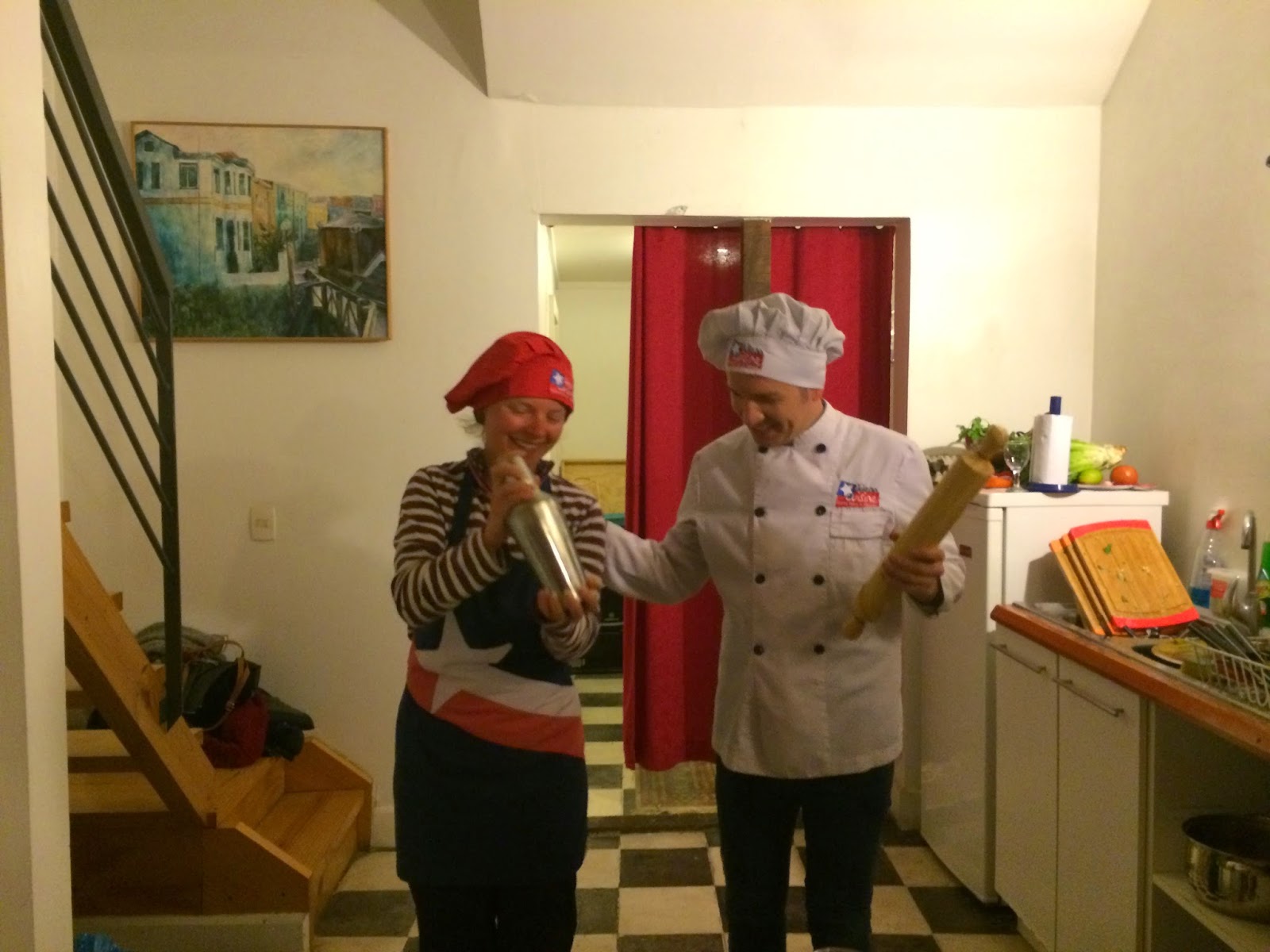 Sweet stuff!
I couldn't do a post about food in Chile without mentioning alfajores! These delicious biscuits are most often filled with dulce de leche and covered in chocolate. Our first taste of alfajores was in Valparaiso, but we also discovered they existed in Argentina too. Not to be missed!

Veggie verdict for Chile
The Chileans really do like their meat and finding good vegetarian options in Chile was more of a challenge than in Peru and Bolivia. Its worth doing a bit of research, using Happy Cow and word of mouth recommendations to find vegetarian restaurants. San Pedro was great, but veggie options in restaurants in other parts of Chile were not quite as appetising. And I started to a bit a little bit fed up with plain cheese empanadas for lunch. 5/10