Salento is a small and colourful town in the zona cafeteria, Colombia, about 8 hours west of Bogotá. We spent 3 days there, enjoying the scenery, blowing things up (!), eating and drinking and of course touring a local coffee plantation.


Here are some of our favourite pictures from our stay.

When we booked our hostel in Salento, I was a little confused that in the confirmation email, we were told that we could get a 'jeep' from the main square to where we were staying.


However, on arrival in Salento, it became clear what this meant. All the taxis in the town are actually colourfully painted willy jeeps, which are perfect for getting down some of dirt tracks in the surrounding area.

Wandering the pretty streets of Salento
The countryside of Colombia is filled with picture perfect colourful towns. Salento was the first one we visited and it's the perfect place for kicking back and relaxing for a couple of days.

Popular with both Colombian and foreign tourists, the quaint streets of the town are lined with great craft shops, restaurants and bars. At the weekend, food stalls fill the main square, mostly selling trout, which are abundant in the rivers in the region. The stalls also serve fried plantain, with various toppings. I enjoyed a plaintain with cheese and mushrooms.


Celebrating James' birthday
James likes to tell people that I gave him an overnight bus ride for his birthday. And its true, we saw his birthday in while on a bus to Salento. Once in Salento, I surprised him with some sparkly overlooking the town, before going out for a tasty meal in the evening.

Valle de Cocora and giant wax palms!
A half hour jeep ride from the main square in Salento, brings you to the start of a beautiful 5 hour circular walk that ends in the Valle de Cocora.


The Valle de Cocora is known for its giant wax palms, the national tree and symbol of Colombia.

You don't have to do the full 5 hour circuit to get to the wax palms, but its a beautiful walk along the river and then up through forest for fantastic views over the surrounding mountains, before heading down to see the wax palms. 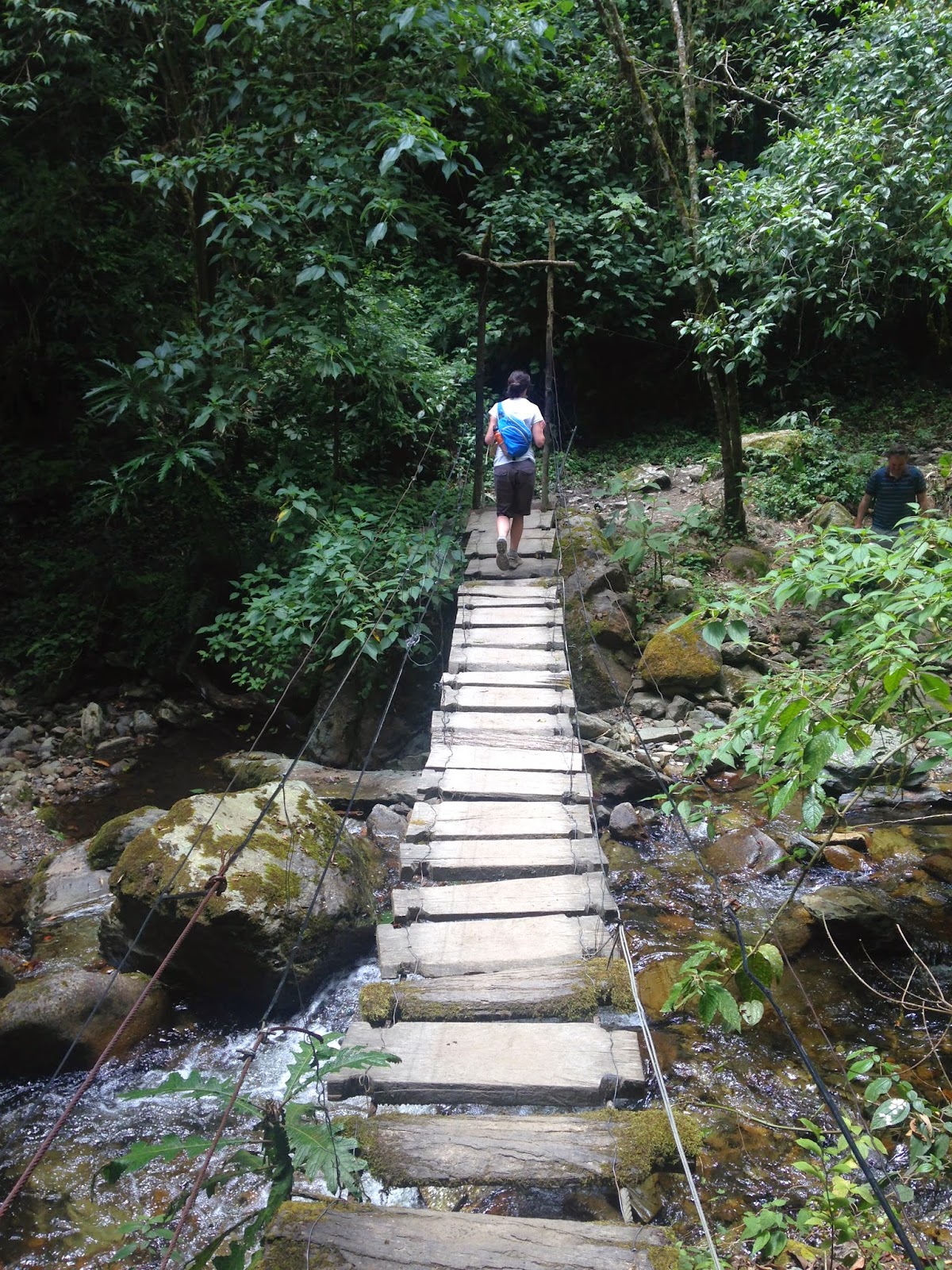 Enjoying the views
Our hostel was a little out of town and surrounded by beautiful views, every which way. We enjoyed our breakfast from the front of the hostel, overlooking the valley below.


And from out the back of our hostel was a viewpoint, where we went to watch the sunset with a beer. 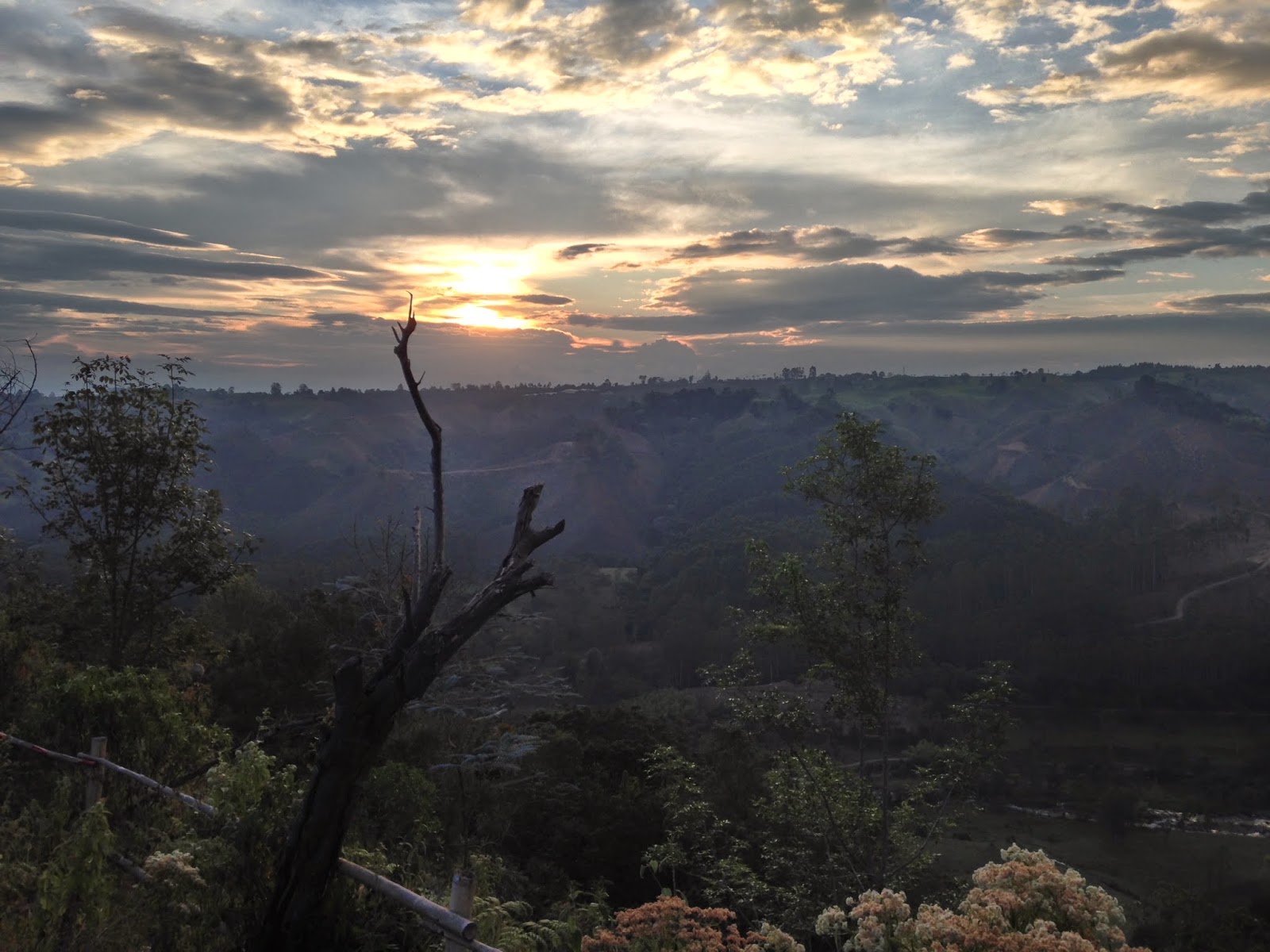 Coffee plantations
There are a number of coffee farms in and around Salento that run tours. A 20 minute walk down the road from the hostel (so a 40 minute walk from the main plaza), is Don Elias' 'finca' or plantation - a small family run operation that we were shown around by Don Elias' grandson.

We were shown round the area where the coffee plants are grown, before being taken to see how the coffee beans prepared, dried out and ground. We then got a chance to sample the fruits of Don Elias and his family's labour.

Playing Tejo
Tejo is a traditional game played in Colombia that involves throwing a mental puck at a board covered with clay with a target in the middle. The target contains gunpowder and so the aim of the game is to hit the centre of the target to make the gunpowder explode.

We played the game in La Aurora a new bar/restaurant that is just up the road from Don Elias' farm. It was a lot of fun (even though James' became a bit smug when he managed to hit the target and cause an explosion!).

We had a lovely few days in Salento. The surrounding countryside is breathtaking and the town is great place to hang out for a few days.


Have you been to Salento? What did you think? Did you get in any games of tejo?

Arriving in Colombia: Bogota
5 things you need to know about Colombia
Highlights of Cartagena
Relaxing on the beaches of Tayrona


Out and about in Medellin
White water rafting in San Gil
From Barichara to Guane
Posted by Sarah at 10:59