The countryside around Paraty is full of pretty waterfalls, cachaça distilleries (known as alambiques), pretty jungle and a number of waterholes for a refreshing dip. 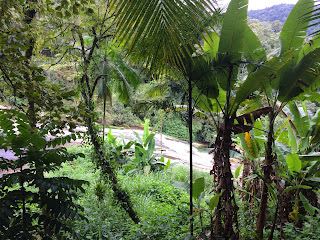 We bought ourselves a ticket for Paraty's hop on and hop off bus, so that we could get around the local area. The bus comes every hour and a half giving you significant time at the different stops. It is also possible to walk between some of the stops.

Our first stop was near the Pedra Branca waterfalls at the end of one of the two branches of the route.

We knew that there was another waterfall up the hill from Pedra Branca and so rather than head straight to this one, we made the mistake of deciding to walk up to the seven falls (or Cachoeira 7 Quedas). 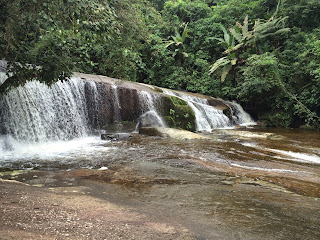 We intended to visit the seven falls and then walk back down to see the Pedra Branca falls before getting back on the next bus. Unfortunately, the seven falls were a little bit of a longer walk away than we had realised.

There were signs along the route with distances on them. However, they seemed to have been placed in the wrong order. We saw signs early on, indicating that we were just a kilometre away. Then the next sign said 500 metres, but the one after that said 3 kilometres.

Every sign we saw contradicted the last one, meaning we had no idea how far we had to go. This also meant that having come so far, we didn't feel that we could turn round and go back because we didn't know if the waterfall was just round the corner (and I kept convincing myself it was).

We were very pleased when we finally got there after a 40 minute walk. It was a quiet relaxing spot, with some pretty falls and a pool, where we cooled off after our slog up the hill. 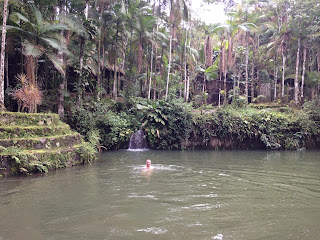 Given how long it had taken to get up there, after cooling off and taking our pictures, we didn't have too much time before we needed to head back down again to get the next bus!

Our next stop was at an alambique, where we stopped to taste different flavoured cachaça. 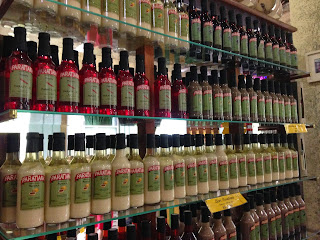 The creamy tasting ones were quite pleasant, but I wasn't too sure about some of the spicier flavours.

After sampling a number of different types of cachaça, we headed down the other 'branch' of the route to the Tobogoa natural waterslide and Poco de Tarzan waterhole.

James had a go on the slide, while I filmed the action! 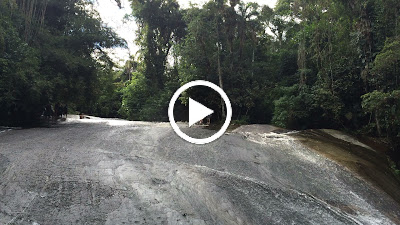 We then walked up to the rope bridge that goes across the Poco De Tarzan. There's a small bar on the other side, where in hotter weather, you can hang out to watch locals jumping in from the high rock. 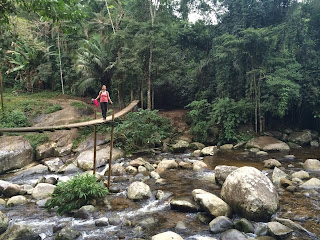 However, we were pretty much the only ones there that day. We went for a swim in the pool, making the most of having it to ourselves. 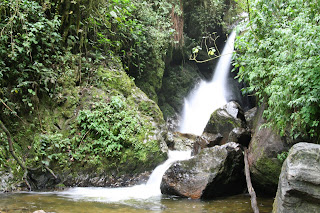 Then with the skies looking threatening we headed back out to the road and to one of the last buses of the day to get us back into Paraty.

The area around Paraty really is quite beautiful and worth an explore. The hop on, hop off bus cost us about £10 (approx $15) each for the day, which given the distance travelled and the number of possible stops, was pretty good going.

If you do want to visit the waterfalls in the area either go for Pedra Branca or give yourself a lot more time so that you can have a longer chill out by the pools.