Watching the World Cup in Argentina


James and I are not really football people. However, we couldn't help but get into the spirit when spending the whole of the Brazilian World Cup in 2014 in neighbouring football mad Argentina.

Living in England, I thought I knew what a football mad nation looked like. How wrong could I be?


When the national team were playing in Argentina, everything stopped! I spoke to a mother who told me that her children's school closed for the quarter finals. Likewise, she was allowed to finish work early to pick them up from school to watch the match with them at home.

And when they did win a match, they went crazy. This is the centre of Córdoba - Argentina's second city - after the win against Switzerland, which earnt them a place in the quarter finals. To see them celebrating, you'd have thought they'd won the whole thing. 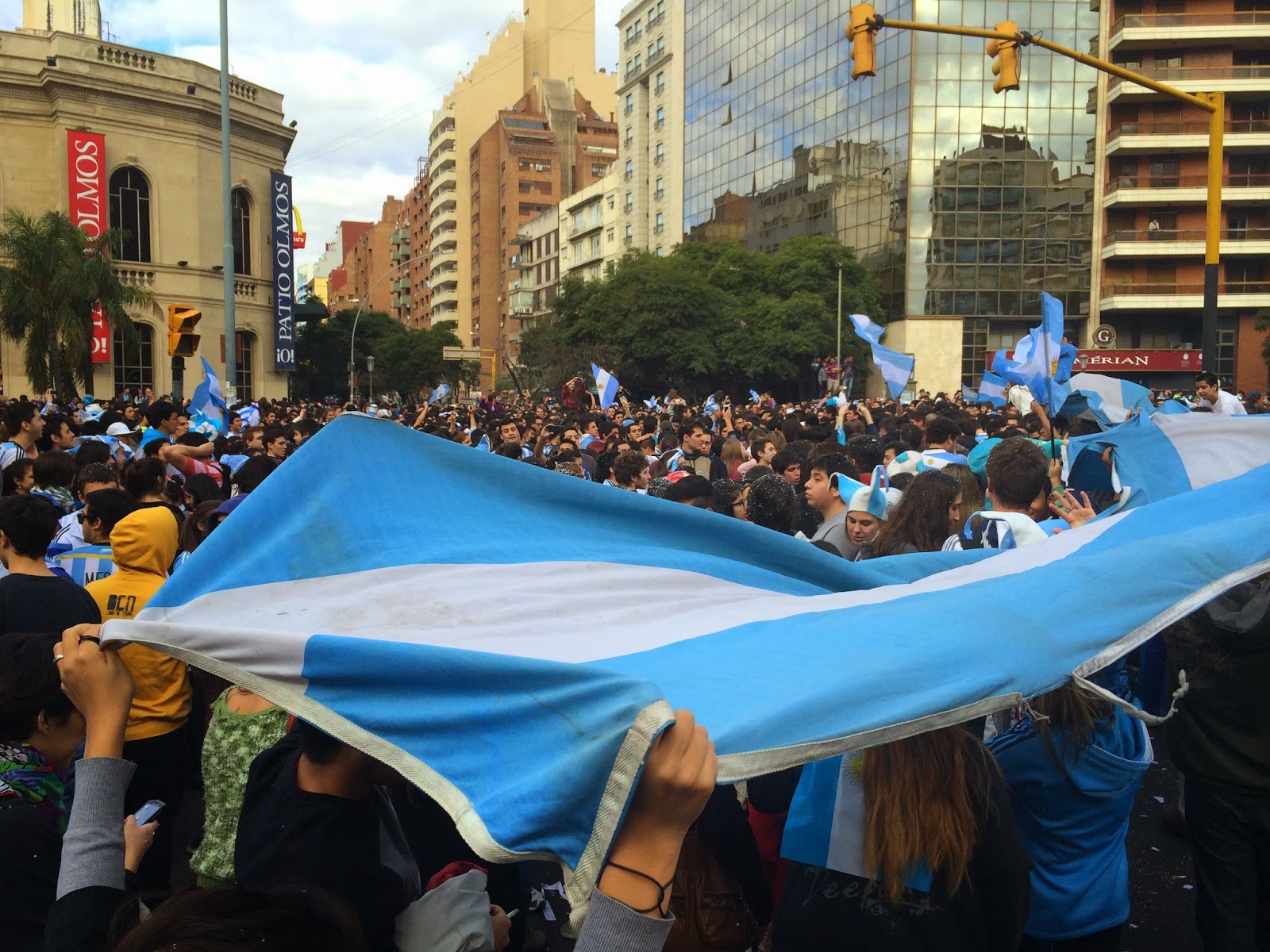 It was during these celebrations that we first properly learnt of Argentina's huge football rivalry with Brazil, as we first heard the song "Brazil decime qué se siente ..." 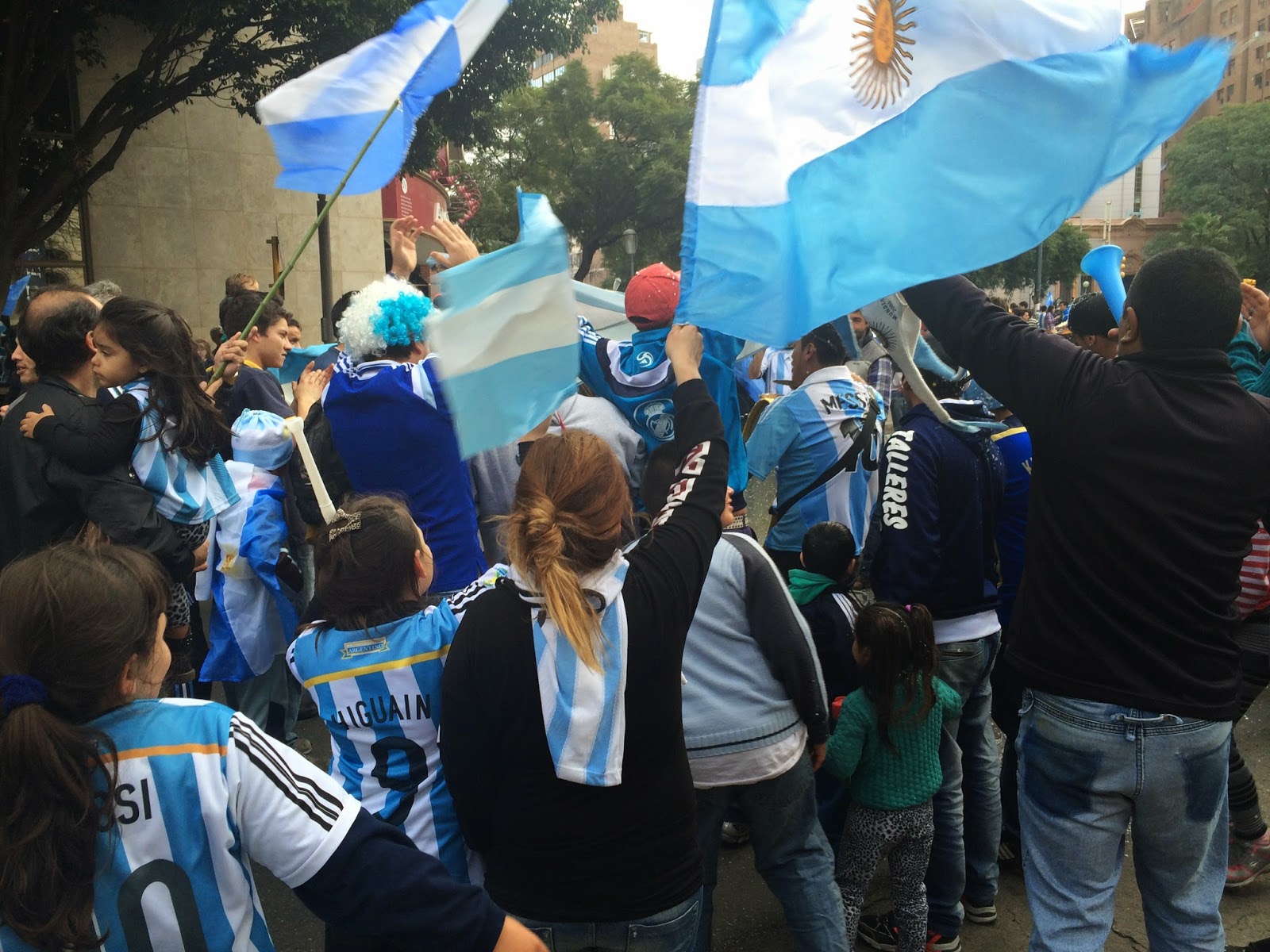 This song is basically a taunt to Brazil telling them how embarrassing it's going to be when they lose the World Cup in their own country and warning that the Argentinian star player Lionel Messi is going to bring the world cup back to Argentina. The song also brags that Maradona was a better player than Pelé.

That the Argentinian fans were singing a song poking fun at Brazil, after beating an entirely different team is demonstrative of how big their rivalry is.

For the quarters, we were in La Cumbrecita. We had the town and surrounding countryside to ourselves for the first half as everyone was glued to their television sets.

We watched the second half over lunch and were entertained by some of those watching who were tearing their hair out and screaming at the television as the match progressed.

For the Brazil-Germany semi-finals, we were at a hostel in Córdoba, with some very happy and almost hysterical Germans. But I think the Argentinians enjoyed the game, in which Germany won 7-1, more than the Germans.


For the Holland-Argentina semi-final, we were unfortunately on an overnight bus. But no matter! We pulled up at a bus station for a pit-stop, which just so happened to coincide with half time.

When we asked how long we were stopping for the driver just pointed to the TV screens at the bus station and said until the end of the second half. Only in Argentina!

Unfortunately the game went into extra time and we couldn't wait any longer. When we got back on the bus the driver put on the radio, so we could listen to the rest of the game.

By the time of the finals, we were well and truly into the spirit of things and really wanted Argentina win - if they could celebrate so vigorously in the second round, the atmosphere if they'd won would have been electric.


We got our faces painted and found ourselves a spot in a very busy local bar to watch the game. There were a number of near misses for Argentina and we started to think that they could win.

Unfortunately, it was not to be. The whole game had been goal-free, but with just 8 minutes of extra time left, Germany scored, bringing Argentina's dream to an end. When Germany did finally score, if you'd not been watching the screen, you wouldn't have realised that anything had happened as nobody in the bar reacted. You could have heard a pin drop.

Happily, Argentinian spirits were not too dampened by the outcome, at least in Puerto Iguazú, where we were - probably as its a holiday destination.

Mistaken for a German (despite having the Argentinian flag painted on his face) James was immediately congratulated on the result. We went on to enjoy a fun evening out surrounded by Argentinians all dressed in the blue and white of their national flag.


How was your world cup 2014? Where were you watching and what was the atmosphere like?
Posted by Sarah at 18:33