Learning about the dictatorship in Córdoba

Like many (all?) countries in South America, Argentina has a pretty brutal history.

Although we’d had some idea of the events of the late 1970s and early 1980s during the time of the military dictatorship, the guide on our walking tour in Buenos Aires really brought home the brutality of the regime, when he highlighted that from 1976 to 1983 up to 30,000 people were ‘disappeared’ by the military.

We were particularly struck by the stories of the estimated 500 children who were thought to have been born while their mothers were in detention and who were subsequently adopted by families sympathetic to the military.

In Córdoba - Argentina's second city - we learnt more about “la Guerra Sucia” or Dirty War, as the period is known, and its impact on the Argentinian people, through visiting museums and reading testimonies of what it was like to live through that period. 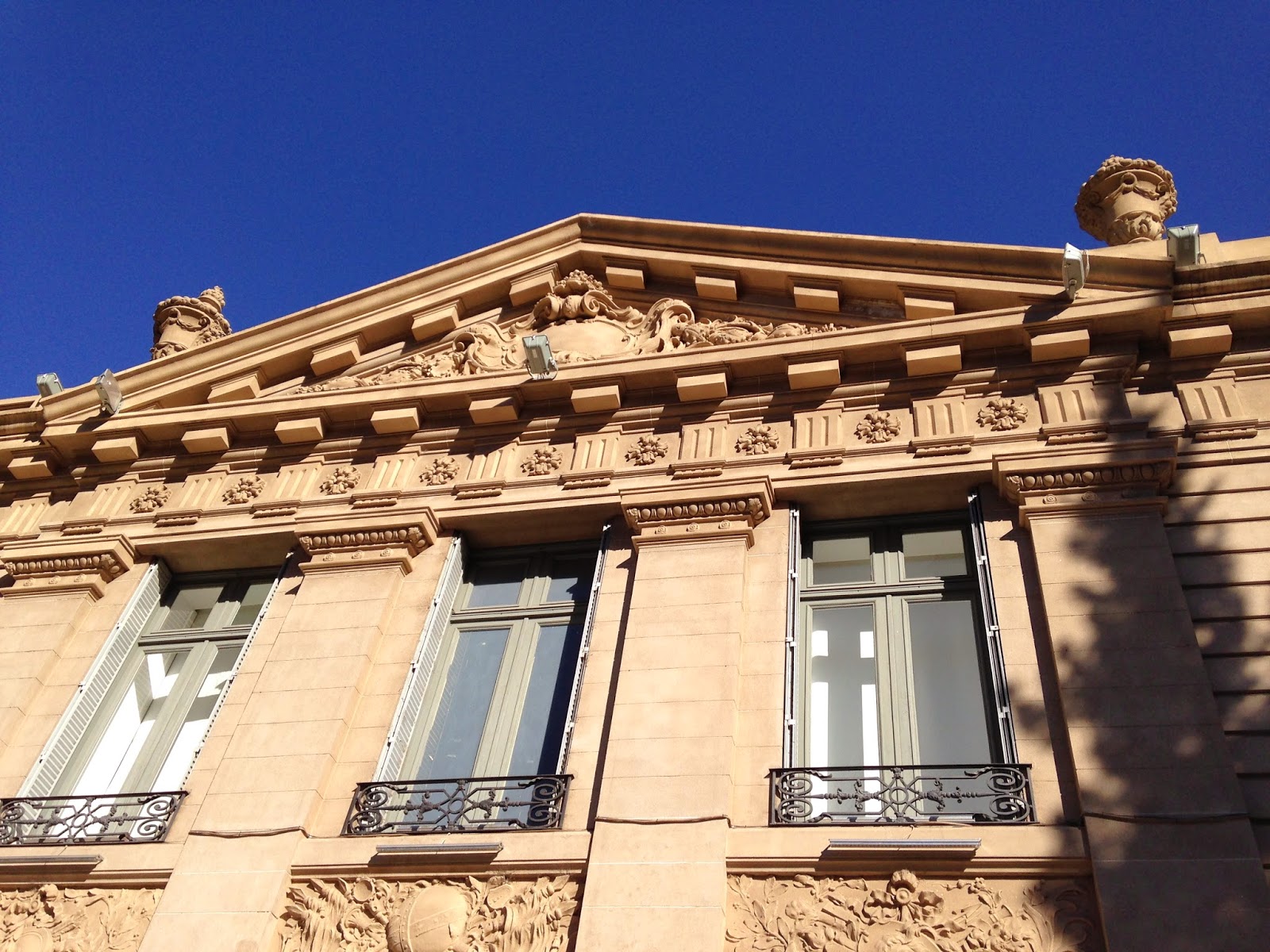 Exhibits downstairs tell you about the construction of the building between 1912 and 1916.

Download Soundcloud onto your phone before you go and you can listen to information, both in English and Spanish about what the different rooms were used for downstairs when the family lived there and how the rooms were laid out. (There is also free wifi at the museum, so you can download it once you get there.)

The building is very impressive and interesting in itself.

However, we were particularly struck by one of the exhibitions upstairs by Carlos Alonso. Entitled "Manos Anónimas" (Anonymous Hands), which depicts people - mostly women and many of them pregnant - being abducted, tortured and raped by mostly faceless military figures. Many of the paintings simply depict disembodied hands grabbing at the women.

The collection becomes even more poignant when you learn that Carlos' own daughter, Paloma, was "disappeared" in 1977. The paintings are chilling and provocative in the way they depict the horrors of this period.

Housed in the former Police Intelligence Department of Córdoba, known as D2, which was used to detain and torture suspected political dissidents, this museum is dedicated to the memories of the disappeared. Around 20,000 dissidents were brought to D2 between 1971 and 1982.

There are oral history and audiovisual areas in the museum, where you can watch videos of relatives of the disappeared talk about what happened to their family members and share photos of them before they were taken by the military police. One of these videos, showed a woman talking about her parents and looking at the picture taken of her mother while at the detention centre and comparing it with earlier photographs of her. She also notes with a bit of surprise that she is now older than her mum was when she was disappeared.


There are other rooms with artefacts and belongings of the disappeared, donated by family members, with a description of the item and how important it was to them.

The museum also displays books that families have put together with photos of their disappeared relative, alongside anecdotes and stories about the person.

These books are beautifully put together and are a very touching way to keep alive the memory of those who were taken by the military police.

The museum stands as a vital reminder of a brutal period in Argentina's history and helps commemorate a group of people who deserve to be remembered in a very personal way.

Other parts of the city also serve as public reminders of this dark period of Argentina's history. The Paseo del Buen Pastor complex was once used to detain and torture female political prisoner. It is now a cultural arts centre, which also houses hip bars and restaurants. Out the front of the building are the dancing fountains, which are apparently spectacular. They weren't working when we were there.

To mark the time when the building was used for much darker purposes, columns that form part of the complex are mounted with pictures of young women who experienced life at the prison, with some information about who they were and when they were disappeared. The words justice, truth and memory are also painted onto the columns. 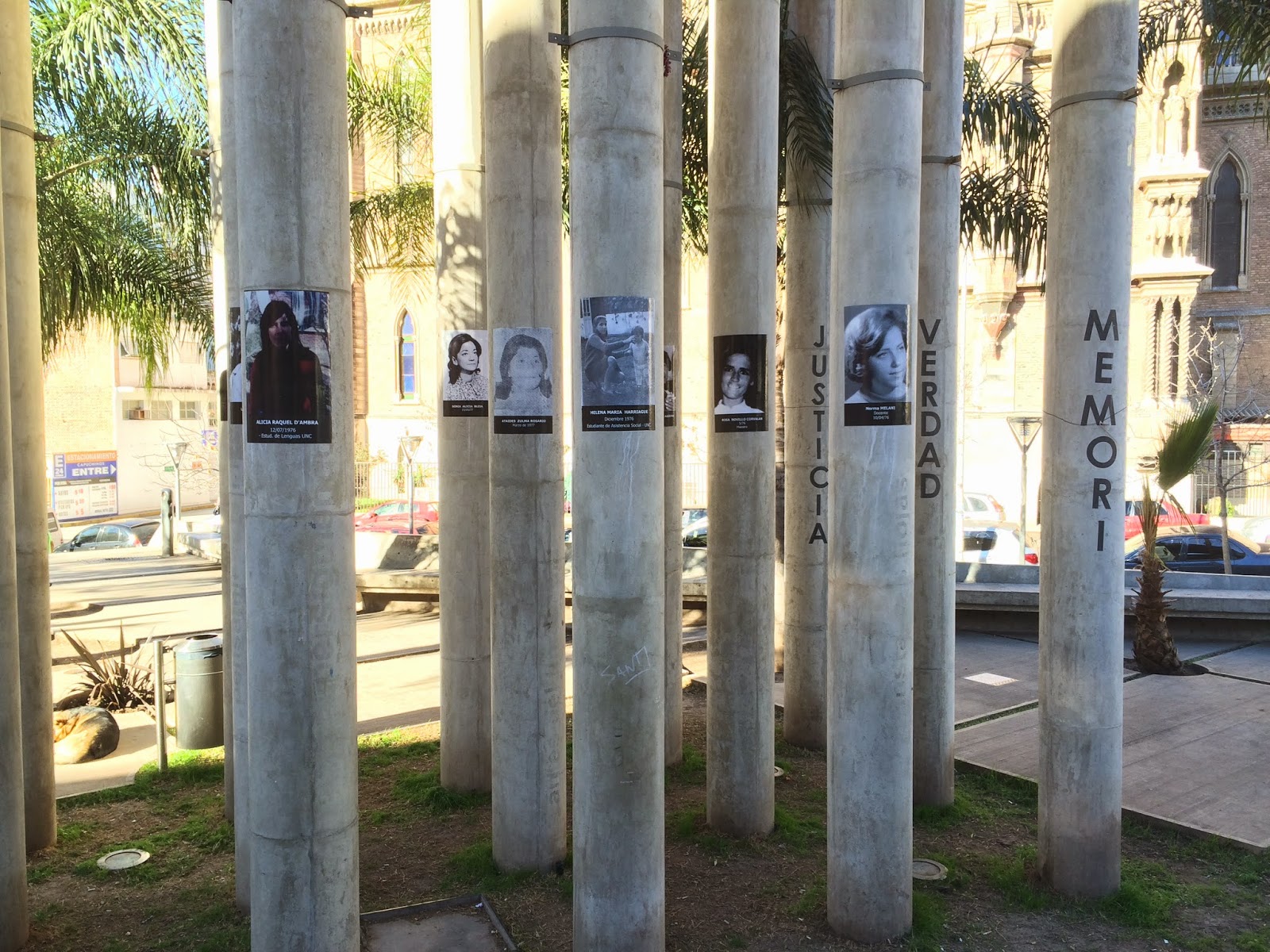 The scars of this brutal period in Argentina's history are still healing, but by keeping the memory of those who were disappeared alive and telling the stories of what happened under the dictatorship, Argentina is helping to make sure that such horrors will never be allowed to happen again.
Posted by Sarah at 15:39