Being Vegetarian in Colombia

Like everywhere else in South America, vegetarianism isn't particular popular in Colombia and most traditional fare involves some kind of meat or fish. However, with a little shopping around, you can find vegetarian friendly Colombian food. And of course, in the bigger cities of Bogotá, Medellín and Cartagena there are also a range of international options.


Here's what we ate:

Colombian food
1. Arepas: An ubiquitous lunchtime snack or side dish in Colombia, arepas are a type flatbread, made with a pre-cooked cornflour. They come with different types of filling and topping, some with and some without meat. I particularly enjoyed the arepas de choclo, made with sweetcorn, giving them a creamy taste.


The cheese arepas are also very tasty - some come stuffed with cheese, others with slices of cheese on top.


Arepas were a much better veggie option in Colombia than empanadas (pasty style snack). While in other places in South America, we found lots of veggie empanadas, in Colombia the empanadas were invariably stuffed with chicken or beef.

2. Patacones: Green plantains are fried twice to turn them into a tortilla chip style snack, known as patacones. On a weekend in Salento, market stands in the main square sell trout from the local rivers. For veggies, the stands also serve up a lunch of patacones covered with cheese and mushrooms, which was surprisingly filling (although perhaps not the most exciting dish!). You can also find patacones served in a similar way to tortilla chips with guacamole or hot salsa.

3. Changua: This light refreshing soup, made with milk, egg and coriander (cilantro) is generally eaten for breakfast and is also apparently a good hangover cure. I was initially quite skeptical when I saw it on the breakfast menu in a cafe in San Gil, but  it was a warming breakfast that set me up for the day.

4. Fruit: While a visit to the markets for a juice or a fruit salad is a treat across South America, the fruit in Colombia really is something special. 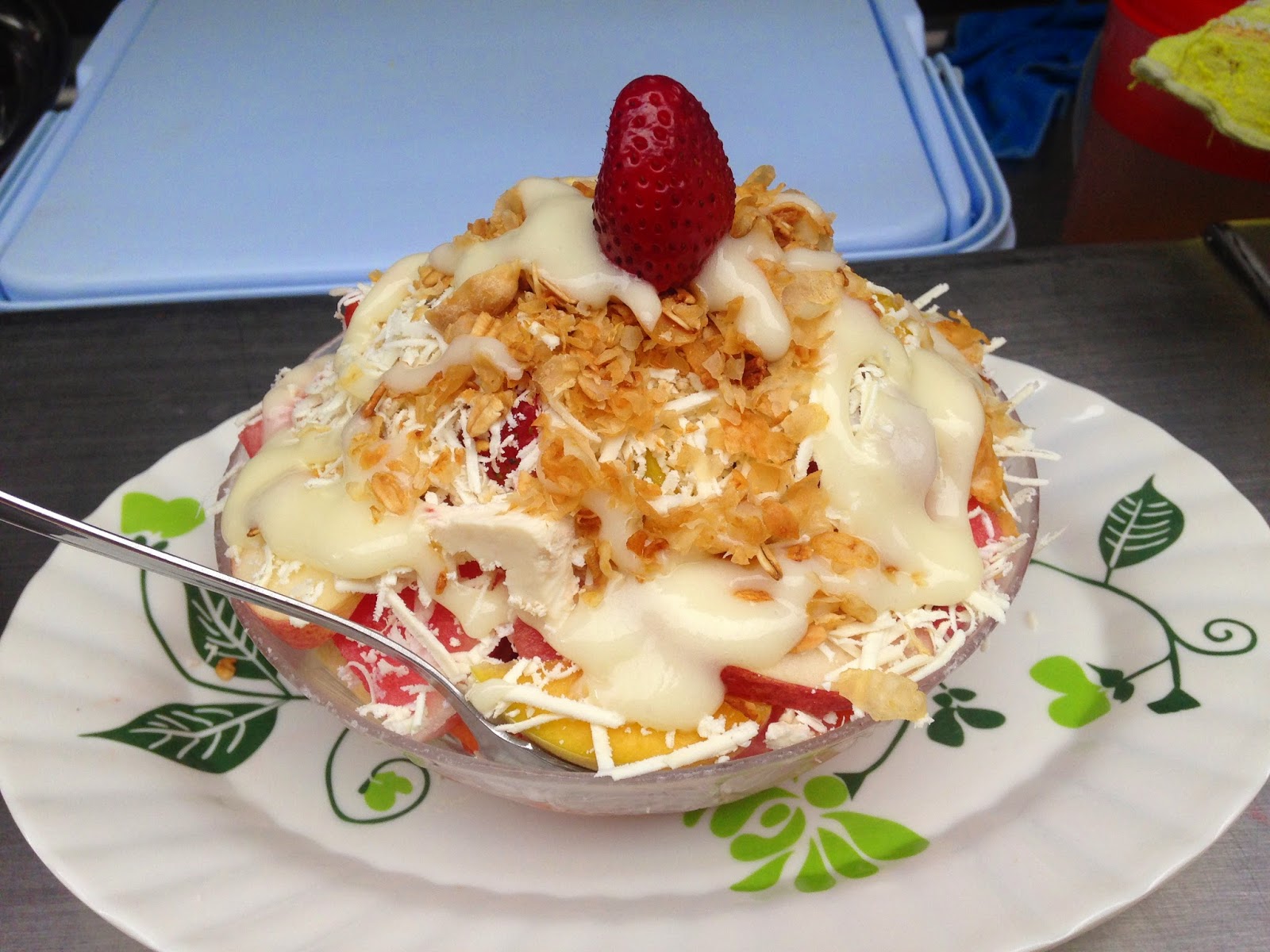 There are so many different exotic varieties, the likes of which are very hard to find elsewhere from tomate de arbol (tree tomato) to cherimoya (custard apple - which is exactly what it tastes like) to algarroba, known colloquially as stinky toe! 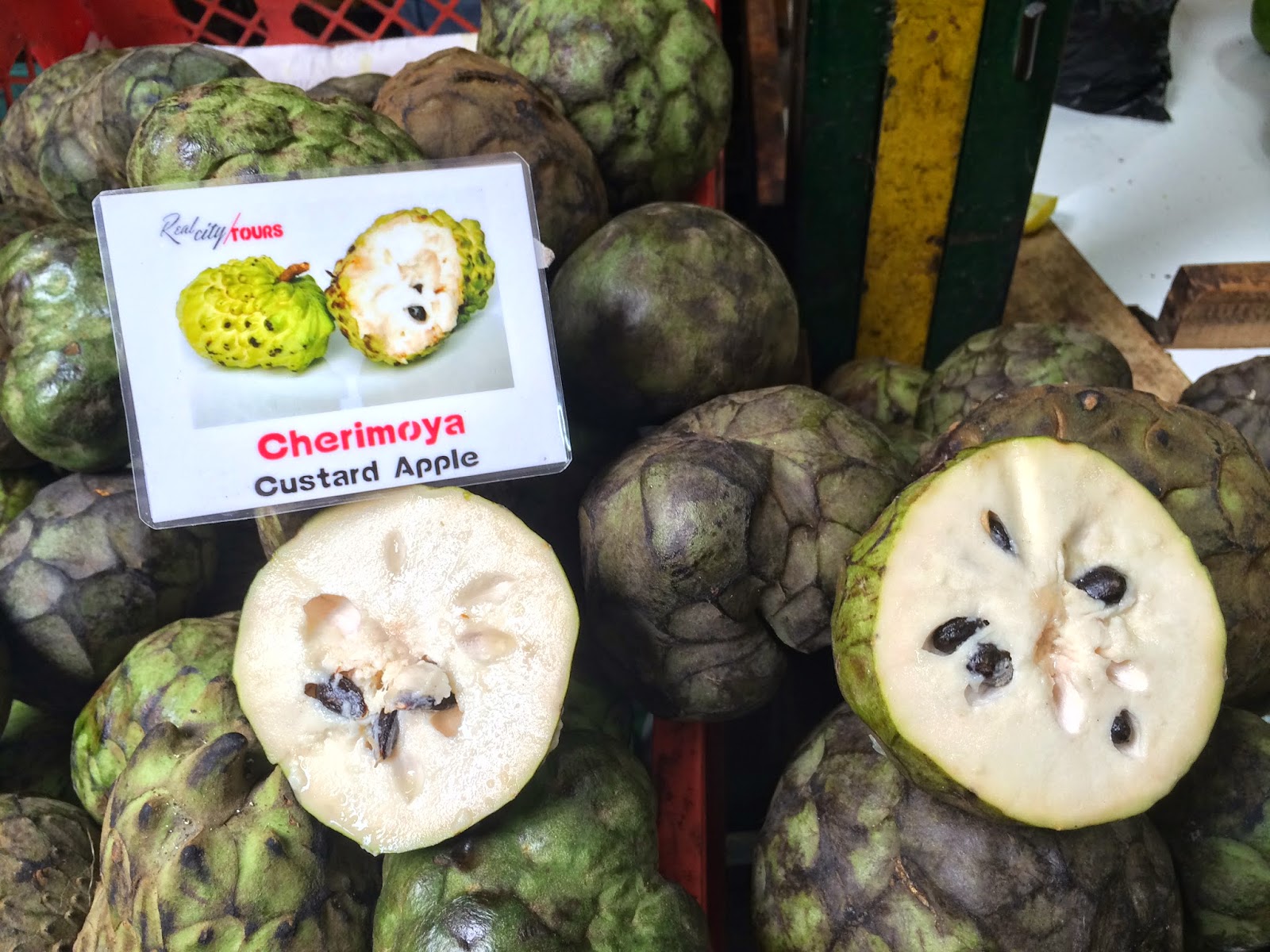 In Medellín, we went on a a fruit tour of a local market to sample the range of fruits that Colombia has to offer. My new favourite fruit became maracuya, a type of passionfruit, which had a tart, but fresh taste.

5. Quinoa: We actually didn't see that much quinoa on the menus in Colombia while we were there, but you can find it if you look for it. I very much enjoyed the comfort of the quinoa burger we found in Radio Burger in Santa Marta, served up with a tasty crisp Bogotá Beer Company beer! 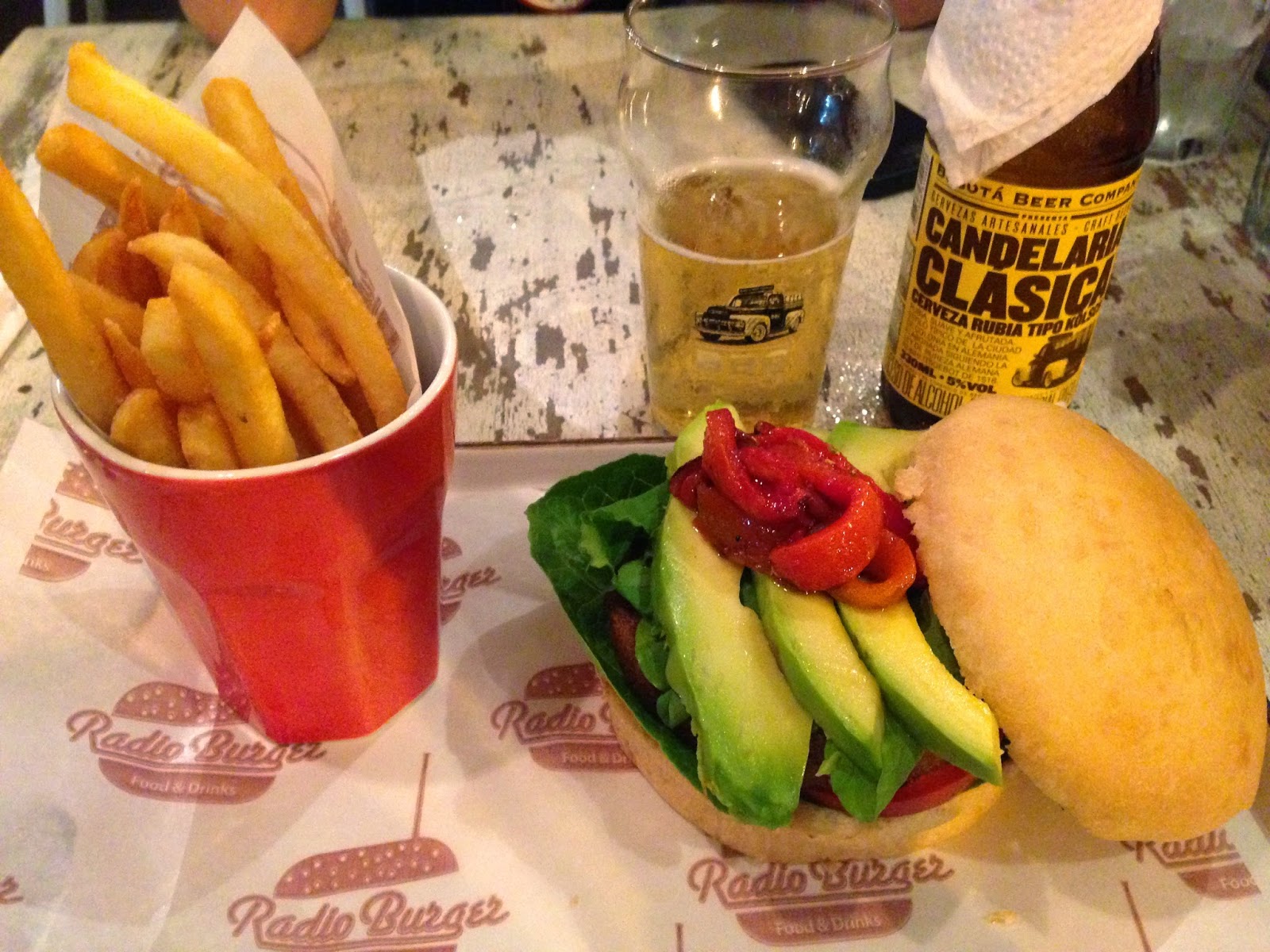 International options
1. Tasty fare in La Candelaria in Bogotá: At lunchtime in Bogotá, I was pleased to find small cafes in the Candelaria area, serving humus, falafal and the like. This was probably the first humus, I'd had for 6 months and it was delicious. There are a lot of meat only options in the area, but walk around and you'll find some gems with some good veggie options. Don't forget to use Happy Cow if you're struggling.


2. Crepes and waffles: This Colombian restaurant chain runs over 70 restaurants across the country and operates in a number of other South American countries. We went to the French style creperie chain in Poblado, Medellín and found it served up a range of delicious veggie crepe options, as well as humongous desserts. In addition, as well as tasty meals, this place comes with a conscience - it only employs single mums.

3. The usual: Italian!: Like anywhere in South America (and probably the world), in cities and large towns in Colombia, a fall back option for veggies is of course the trusty pizza, some pasta with a tomato sauce and other Italian options. Even on the remote beaches of Tayrona, there were vegetarian pasta dishes on the menu at the restaurant/cafe at the main campsite. And at lunchtime, delicious hot caprese sandwiches were on sale from a wandering salesman. 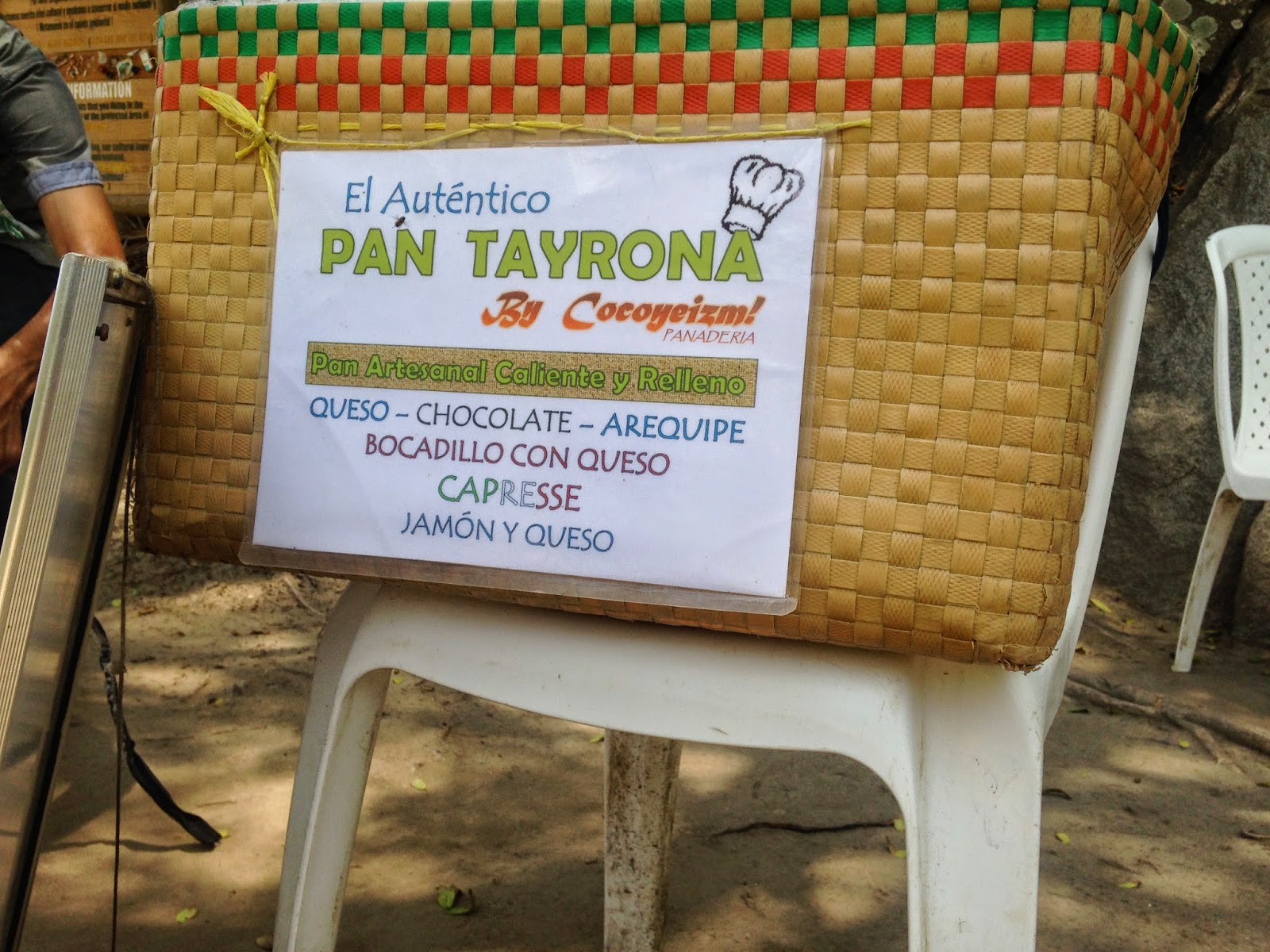 4. Babaganoush in Taganga: This place gets a special mention as we literally had the best meal in Colombia here. The restaurant has an amazing view over the bay - get here for sunset to have a beer or cocktail while the sun goes down. The menu here isn't huge, but there are a couple of delicious veggie options - try the pumpkin soup!

5. A range of options in Cartagena: Cartagena has a large number of options of different types of international food from curry to tapas to Mediterranean for all budget sizes.  If you want a bit of a splash out, Agua de Mar is a must visit. This specialist gin and tapas restaurant was probably more of a find for the specialist and personalised gin and tonics they served up than the food, although that was yummy too.


I was quizzed on my likes and dislikes before the barmaid determined which gin and which tonic was right for me. And it was delicious.

A cheaper option in Cartagena is El Balcón, where I had humus and a veggie wrap. 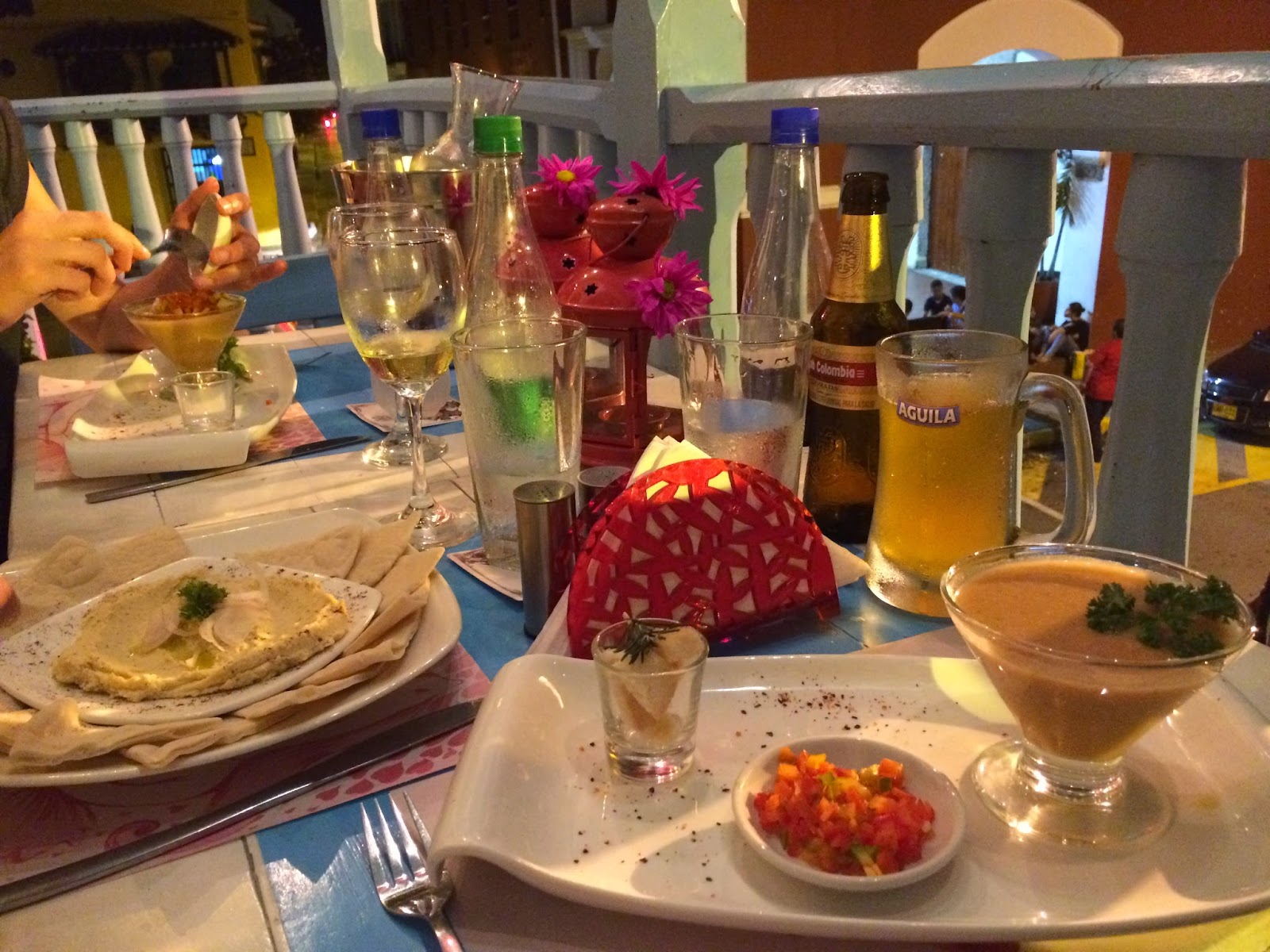 While wandering the hot streets of Cartagena, do also pop in to one of the ice lolly shops to get yourself a cooling snack. Because of the range of exotic fruits available in Colombia, there is a huge range of flavours to enjoy! 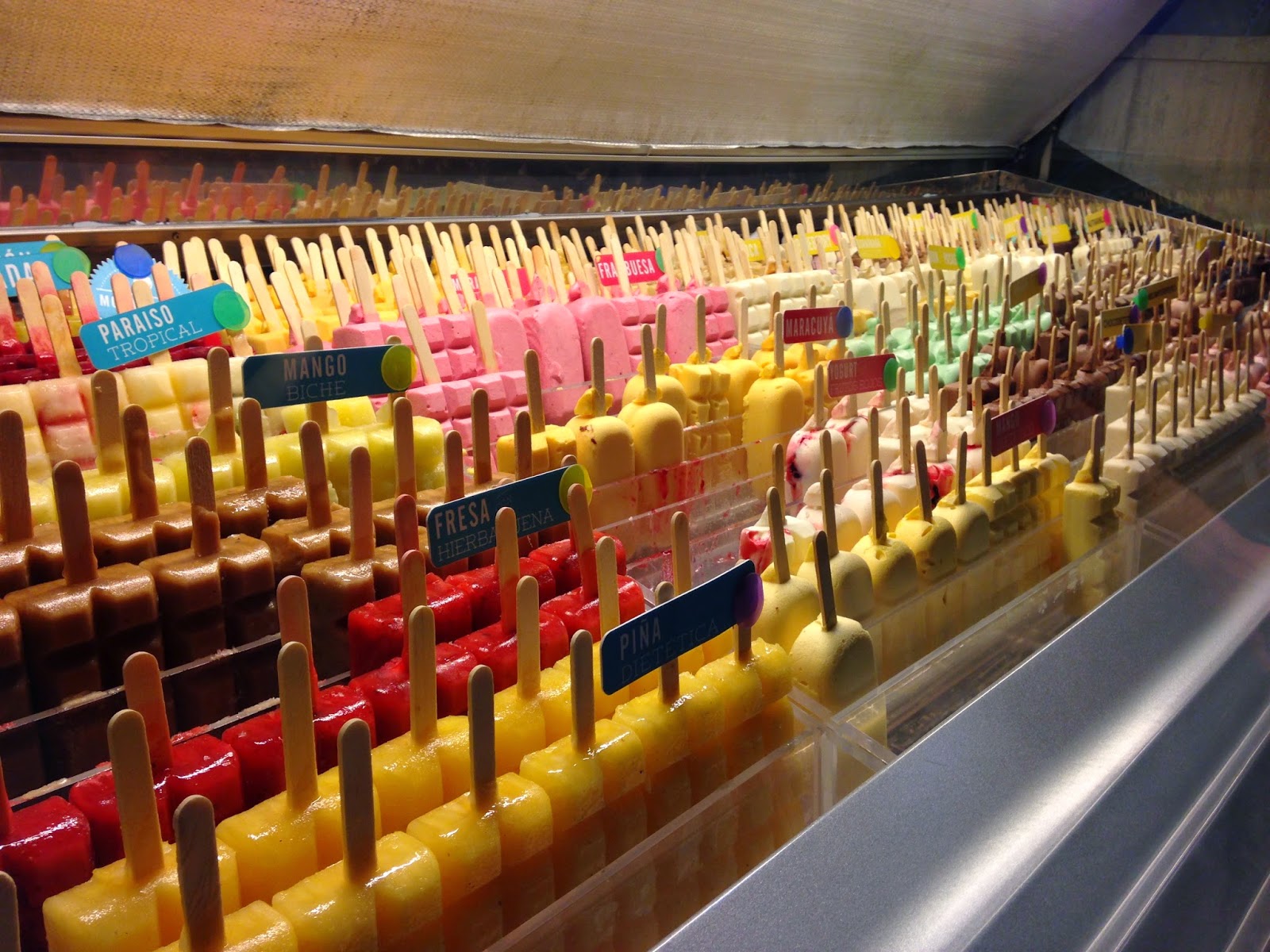 Have you visited Colombia as a vegetarian? What advice would you give to other vegetarians? Did you have a favourite restaurant?