During our recent visit to Boston, we were impressed by the enterprising spirit of this man, who we saw begging outside the Old State House, the oldest surviving public building in Boston. 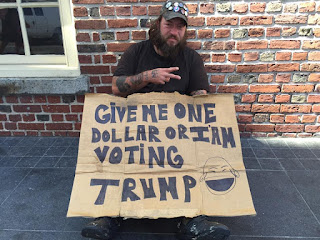 The Old State House was built to house the colony's government in 1713. In 1776, it was from the balcony of the building that the Declaration of Independence was first read to the people of Boston.

As such, pretty much every visitor to Boston will pass by the Old State House and snap photos at some point during their visit. It is tourist central! So I'd say that this guy was pretty good at really capturing the right mood for those passing by.

We gave him a dollar and did our bit. And we were not the only ones.

Now its over to you, US voters! Do the right thing (and I may even give you a dollar too!).