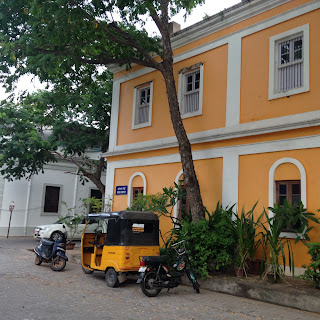 Pondicherry, affectionately known as Pondi, is a large town on the East Coast of India, about three hours drive south of Chennai. 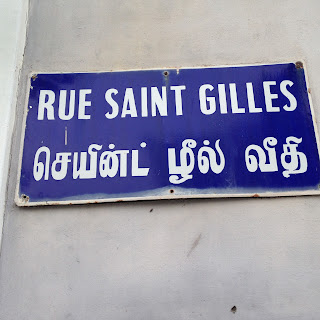 It was the largest French colony in India and the town is very proud of its ongoing links to France and its French heritage. On our walking tour of the town, our guide told us about the schools and hospitals the French built (which us Brits hadn't seen fit to do when in charge), helping explain why the locals are so fond of its French links. 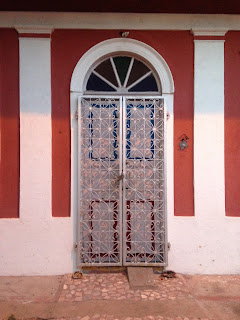 The town itself has a 'French Quarter' lined with colonial looking buildings, mostly painted white. There are also a number of French institutions in the town, including a consulate, as well as a catholic church, where most of the sermons are apparently conducted in French. In addition, the police in Pondicherry all wear a red 'kepi' most associated with the French military uniform.

But don't be fooled. This is definitely India. On the streets of Pondi you are unlikely to hear much French apart from the smattering of expats, the rules of the road are certainly not European and the sign below is definitely ignored. 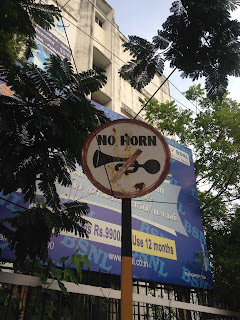 'The Mother'
One particular French woman has made a lasting impression on the town. Mirra Alfassa first came to Pondicherry in 1914 when she first met the spiritual leader Sri Aurobindo. When he went into seclusion in 1926, she set up a spiritual commune or 'ashram' to follow his teachings and became known as 'the mother' by her followers.

Sri Aurobindo died in 1950 and the mother died in 1973. Their bodies are buried together in the main ashram building and you can go freely to the area they are buried to pay your respects. 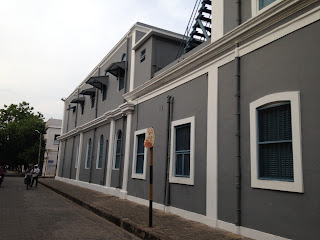 The ashram buildings now stretch over several blocks in the town, painted in a distinctive grey and white and anyone you see in that area wearing a shirt and shorts are part of the ashram. While you can enter the main building during the day (leaving your shoes outside), you have to have a special pass to go to the other buildings to join meditation classes and other activities.

Elephant blessings
There is also a very interesting temple in Pondicherry, where you can get blessed by an elephant. He stands outside with his keeper all day and pats anyone who gives him money on the head with his trunk. 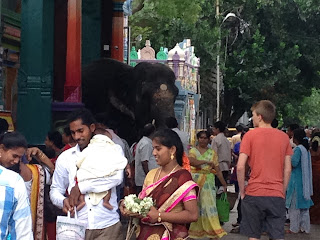 We didn't go for a blessing as we felt uncomfortable about the elephant's welfare. He looked healthy enough and wasn't chained up, but we felt the whole thing was a little odd.

The seafront and beaches
A popular pastime in the town is walking up and down the seafront either at morning or at night when it's cool enough for a nice stroll. Go at night for a bit of a party atmosphere and find yourself a rock to perch on to people watch! 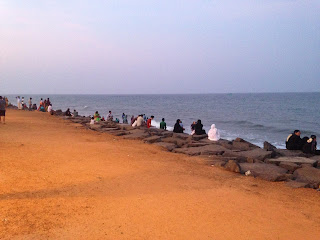 And tuck in to the yummy street food. 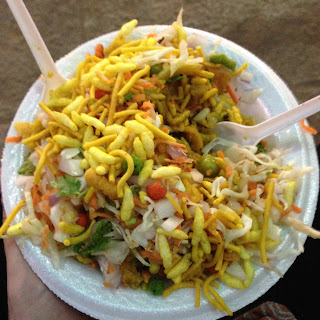 The seafront in Pondi itself doesn't have a beach to speak of, but there are some great beaches nearby. We went to what is apparently the nicest one, Paradise Beach, and on an early morning on a week day in May had it practically to ourselves. 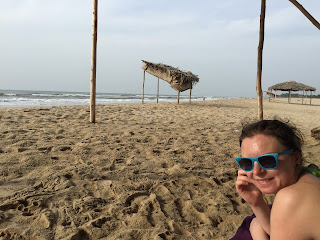 There are two ways to get to Paradise Beach. Most of the internet posts we read talked about getting a rickshaw to the Chunnambar Boat House and the catching a motorboat for 200 rupees down the Chunnamabar backwater to arrive at the beach. 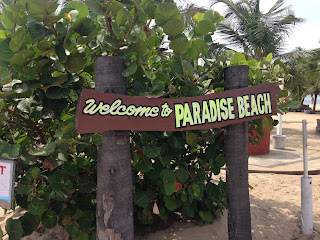 However, our rickshaw driver asked if we wanted to 'go there directly' and in our miscommunication, he took us to a small hamlet called Chinna Veerampattinam. From here we could walk directly onto the beach and down to the area called Paradise Beach. 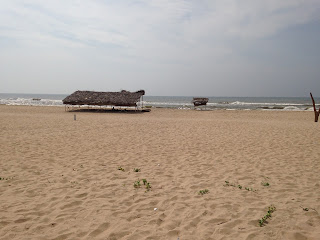 Strangely, if you look on googlemaps the beach that we walked down to get to the Paradise Beach area is actually sea, so we think that maybe the authorities have reclaimed some land from the sea to make the area more accessible.

Back in town
In town during the day and want to escape the sun? There's a park in the centre of the French quarter with lots of shade where you can relax and enjoy a pic-nic with the locals. In the middle of the park is a monument dedicated to a prostitute, who gave the town access to a water source in her garden, ensuring that people in Pondicherry could have access to water.

Food and drink options are pretty good in Pondicherry too. There are a couple of European style cafes and a range of restaurants. I do have to admit though that for our evening meals, we didn't get beyond visiting Villa Shanti, which served delicious dals and fantastic paneer dishes. 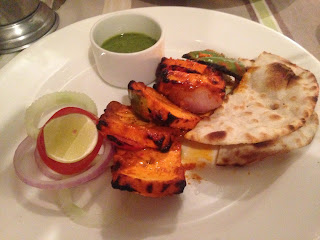 The setting in Villa Shanti in a courtyard area of one of the old heritage buildings is also really quite lovely.

The heat! Both evenings we were were there, we washed down our tasty meal with a nice cold beer, which at the end of a heat-filled summer day at the end of May in Pondicherry was very welcome.

If you can be picky about when you go to Pondicherry, November to February sees the best temperatures (i.e. not too hot) and the least rainfall.

But visit at any time and you'll find a unique quite cosmopolitan town, with an interesting history, pretty architecture and a relaxed atmosphere.

Have you been to Pondicherry? What were your lasting impressions? Did you visit the ashram?

Related posts:
Our Pondicherry Top 5
Highlights of Bangalore
At the temple in Bangalore

Destination guide: Snooty Ooty
Being vegetarian in India
Posted by Sarah at 22:43