From Pondicherry, we caught a local bus 2 hours north to Mamallapuram.

Buses leave really regularly from the bus station in Pondi. Practically as soon as we got to the bus station, we were pointed to a Mamallapuram bus that was just pulling away.

Running towards it, I double checked with someone who looked official that it was the right one and received a classic Indian head wobble in reply. Only having been in the country a week, I wasn't 100% clear that in this instance it meant yes, so I asked again and got a bit more of a verbal assent.

Once on board, another passenger confirmed we were on the right bus and then very kindly took it upon himself to look after us by letting us know how much further it was and when to get off.

The journey itself was a bit of an adventure. The bus horn was so loud - I swear it was directed into the bus rather than outside - that I asked James to see if he could download an app to measure the decibal levels. Unfortunately, he wasn't able to get one, so the long-standing damage to our ears is unclear.

On arrival in Mamallapuram, we headed straight to the Butterball Bed & Breakfast, where at the beginning of June I think we may have been the only guests. We checked in then headed out to explore the hill area, which is littered with odd rock formations, religious reliefs carved into the rocks and cave temples.

Entering the hill area, which was full of Indian tourists, sitting on the grass with their families or playing cricket, we were immediately drawn to the curious looking rock, perching perilously on the side of a slope known as Krishna's Butterball. We set about taking the obligatory comedy photos.

We spent a good two or so hours walking around the hill area, admiring the cave temples and carvings and climbing up rocks to find the temples built on top.


Eventually - as happens regularly if you are Western traveller, visiting a tourist site filled with lots of Indian tourists - we ourselves became an additional tourist attraction.


I was approached by a family, who wanted a photo of me holding their baby. Soon enough, baby after baby was passed to me and had my photo taken with various members of an increasingly expanding very large family.

Once sufficiently 'papped', we visited one last stone temple and headed back to the hotel. 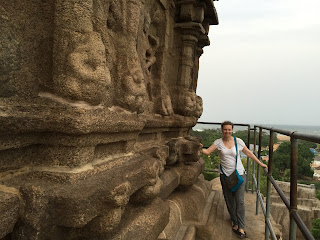 That evening, we found ourselves in the area of town described in the Lonely Planet as 'backpackistan'.

Entering one of the restaurants, we realised why. The relaxed atmosphere, with cushions on the floor and a hippyish decor felt very back-packer-ey, so it was perhaps not the most 'authentic' of places. However, the food was good enough and the beer nice and cold, which was appreciated at the end of a hot day!


Up the next the day, we headed out to see the other two key attractions in the town: the Shore temple and the 5 Rathas. 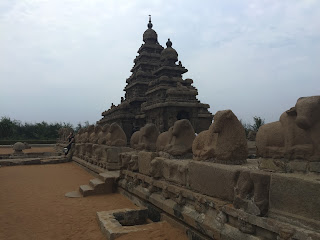 The Shore Temple is imaginatively named - it sits right by the sea shore in Mamallapuram. The stone temple is quite small, but it is a pretty little structure with impressive carvings.

We walked from the Shore Temple to the 5 Rathas. Along the way, we enjoyed stopping now and then to watch all of the stone masons hard at work, carving anything and everything from large elephants to giant Ganeshes to small trinkets. 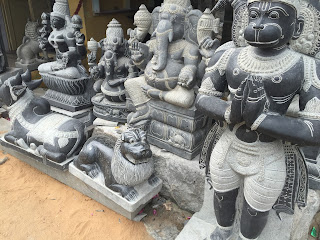 The town is well known for its craftsman and stopping and chatting to them for a while, it was clear how very passionate many of them are about their art.


At the 5 Rathas, we got ourselves a guide to look around the five structures - they aren't actually temples as they were never finished and so weren't consecrated.


The structures were built in the 600s and are monoliths - impressively carved from a single rock. 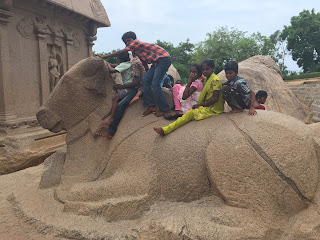 Our guide was useful in explaining the different Hindu gods depicted on the different structures, although I think I need to do a bit more studying, before I can tell Vishnu from Brahma.


From the 5 Rathas, we had a slow walk back into town, stopping once again at the various stone masons - some of their work is just incredible. 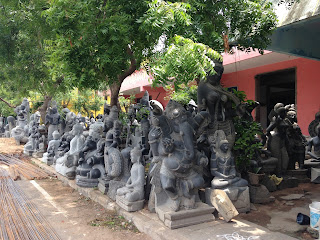 Late afternoon, after grabbing a late lunch and taking a look at the beach, we left the fascinating little town of Mamallapurum to head to Chennai, where we got on a night bus to Ooty.


We really enjoyed our short visit to Mamallapuram and would definitely recommend including it in your Tamil Nadu trip.


Related Posts
Introducing Pondicherry
Our Pondicherry Top 5
Highlights of Bangalore
At the temple in Bangalore
Destination guide: Snooty Ooty
Being vegetarian in India