Bangalore is not a city filled with must-see tourist sites. Instead, it is a vibrant, lively and fairly modern place where people live and work, rather than visit and sightsee. And this was why we were here. Not to live and work ourselves, but to visit some friends, Sara and Mike, who are working out here and to see a snapshot of their new lives, living in India.


They looked after us very well, taking us to some of their favourite bars and restaurants, introducing us to their friends, hanging out with us by their rooftop pool and lending us their slightly bonkers dog, Joey, to play with.

While in Bangalore, as well as hanging out and socialising with our friends, we also took the opportunity to have a bit of a look around the city. Here is a flavour of what we saw, ate and visited:

1. Yoga and breathing exercises in Cubbon Park
Sara and Mike live close to Cubbon Park - a  sprawling 120 hectare park that has helped earn Bangalore the nick name of the 'garden city'.

They take their dog for a walk there every morning at about 6.30am, when it is already alive with people beginning their daily routine. It was fascinating to join them and see people perform their yoga routines or sitting on a bench going through a series of breathing exercises. I was particularly fascinated by the lady we saw on successive mornings with her pack of golden retriever dogs (all with red bindis on their foreheads), going through her yoga exercises. Sara told me that apparently she hasn't spoken for 7 years.

It's a lovely green space, with lots of trees, little chipmunk-like animals, parakeets as well as the obligatory street dogs. Its well worth an explore. If you can get there before 8 am, its a bit more pleasant as the roads that go through the park are closed to traffic.

2. Eating masala dosa and mango
We love Indian food and as a vegetarian, I was particularly excited to be going back to India where I could try (nearly) all of the local specialities. On our first day, Mike introduced us to masala dosa, a typical South Indian dish. The 'dosa' is a type of pancake made from  a fermented rice and lentil batter. Masala means mix and in this case is a mix of potatoes, onions and spices, stuffed inside the pancake. It was delicious and became a bit of a staple for us when on the road in South India.

It was also mango season while we were in Bangalore, which meant delicious, melt in your mouth mango slices for breakfast, as well as freshly squeezed juice at the local juice stall. Yum! 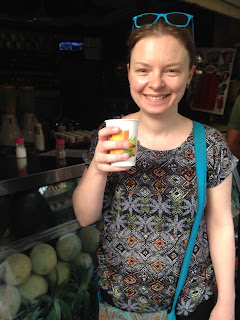 3. Shiva Temple, Old Airport Road
The Lonely Planet recommends a visit to the Bull Temple, which it describes as one of the city's most atmospheric temples. On Sara's advice, we skipped it and went to the Shiva Temple on Old Airport Road instead. It was quite the experience.

After paying for the 'full package', we headed into the temple through a grotto-like tunnel. Once inside, we took part in various mini ceremonies to pay homage to the Gods, including throwing 108 coins into 108 holy bowls one by one, while chanting, pouring coconut milk over the sacred Shiv linga and throwing a coin into the wish pond. 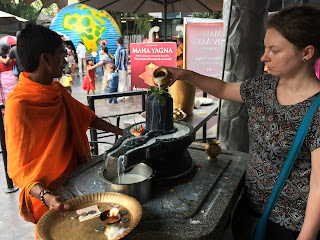 This temple had a little bit of a theme park feeling to it, which perhaps made it even more interesting. The temple staff (right word?) were also very welcoming in showing us what we needed to do. It was definitely worth a visit.

The fading grandeur of the Bangalore Palace made for an interesting tour to get an insight into the life of India's maharajas.

While not as impressive as some of the palaces, we saw in Rajasthan a few years ago, we enjoyed the display of interesting furnishings, including a 'jockey scales', as well as the collection of photos on the walls and the stories from the family on the audio tour.

The elephant foot stools and elephant trunk vase on display were however a little macabre! And we were also quite intrigued by the palace's collection of nude portraits. 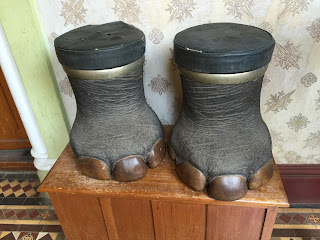 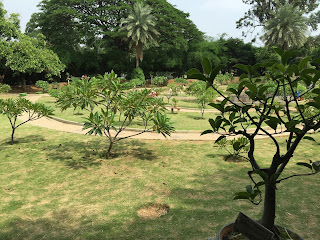 Another sprawling green oasis in the city, the botanical gardens are a nice place to wander around, find shade (!) and chill out in the centre of Bangalore. 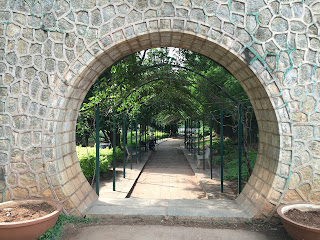 Visit the 'gneiss' - a geological formation in the centre of the park, the bonsai tree area and walk around the lake.

The botanical gardens were where we had our first being 'papped' experience in India this time. A number of Indian tourists visiting the gardens were oddly excited to see westerners and wanted their photos taken with us. One teenager was a little shy and we noticed he kept moving away his camera phone if we looked up and caught his eye. In the end, James waved and his younger brother came over to take our photos.

6. Commercial Street
Commercial Street is definitely worth a visit for all your souvenirs and presents. The scarves, clothes and bags on sale are really beautiful. And there is always a bargain to be had if you're ready to haggle. I managed to get a good deal on the 5 scarves I bought (yes 5!).

Pop in to Mysore Sari for a real local experience and take a seat while the sales people show off their wares to you and locals pick out fabrics for dresses, shirts and saris. 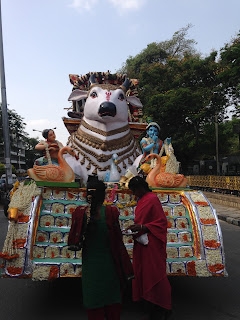 There's always something going on in the streets of India and on our first day in Bangalore, we were welcomed by a Hindu parade, involving dancing tigers and a giant cow god (which had offerings given to it as it went along the road).

This particular dancing tiger was my favourite to watch. He was just so involved in the dancing! 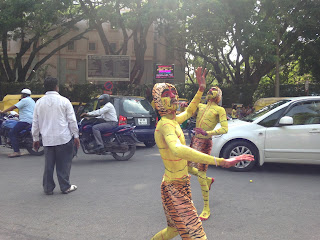 Have you been to Bangalore? What did you think of the city? what are your highlights?