The craft beer industry is booming in Europe and the US. During our trip around South America, we were pleased to find its popularity on the rise there too. So, during our 7 months in South America, as well as supping on the national drinks of each country, we also spent some time seeking out the local craft beers. Here our our favourite beers, microbreweries and places to drink.

1) Bogota Beer Company (BBC), Colombia. We found the BBC bar in the Candelaria area of Bogota on our first night in the city and were impressed with the range of different beers on offer from a porter to a honey ale to an amber ale. I particularly enjoyed their 'Candelaria Clasica' - a kölsch beer, which was a bit fruity but not too hoppy and gentle on the tongue. It was also very refreshing in the Colombian heat. 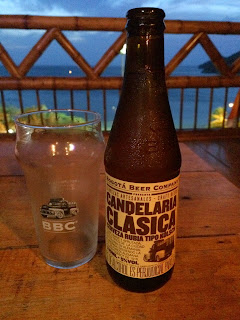 BBC beer is sold throughout the country too and not just in the BBC bars in Bogota. We also found it in Taganga, Santa Marta, San Gil and Medellin. Make sure to try some if in Colombia.


2) Antares, Argentina. Our Air BnB host in Mendoza introduced us to one of his favourite bars in the city, 'Antares'. This was a lively bar, with wooden tables, well priced and tasty nibbles and a great atmosphere. 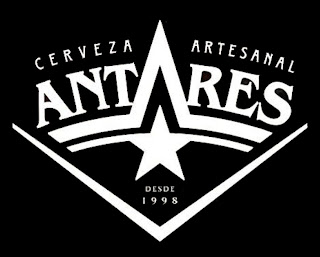 Later on our travels around Argentina, we were pleasantly surprised to find Antares bars in Cordoba and Buenos Aires. In fact, there are 22 Antares bars across Argentina. For James in particular, finding an Antares bar in the towns we visited in Argentina, and drinking up their porter, provided a welcome break from Quilmes lager (which dominates the Argentinian beer market).

3) 3 Cordilleras, Colombia. Smaller than BBC, 3 Cordilleras is a microbrewery, based in Medellin. There's a tour of the brewery every Thursday night, which we didn't manage to get to. However, we found 3 Cordilleras for sale in town and enjoyed trying several of the 6 beers they offer in including the sightly unusual rosada, which is a bit of a nod to European fruit beers. Their American Pale Ale - the Mestiza - is also particularly good.

4) Barranco Beer Company, Lima, Peru. The Barranco Beer Company is a great find in hipster Barranco. The beers are made on site and although they don't have a massive range (there were only 3 options when we were there), the beer is good and the atmosphere is friendly.


5) Goblin Bar, Sucre, Bolivia. My favourite bar in Sucre was actually La Quimba Cultural, with its friendly staff and wooden interior decorated with all kinds of musical instruments. However, there is no craft beer to be found here! A couple of doors down, however, is the quirky Goblin Bar that produces its own ales. When we were there they had a light golden ale, an amber beer and a stout. I particularly enjoyed the amber beer. The food wasn't bad either - not haute cuisine but hearty fare.


6) Casa Cervecera Altamira, Valparaiso, Chile. At the bottom of the Reina Victoria lift is this little cavern of a Belgian themed microbrewery. You can order a sample of a selection of the beers, if you want to have a tasting session or go for a half litre if you're feeling thirsty. The food is largely pizzas and burgers. The menu suggests beer pairings for all of the meals. Its a cosy little place with a good atmosphere. 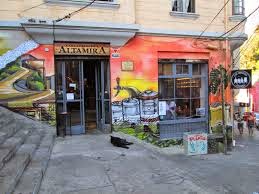 7) Cerveza Artesenal Pirca, Maipu, Argentina
I have to admit that after all the wine we had drunk in the vineyards of Maipu before we got to the local beer garden, I can't really remember what the beer was like at Cerveza Artesenal, Pirca. However, it was a pleasant change to sup on some beer at the end of a hard day wine tasting, with some tasty empanadas for those with the munchies! 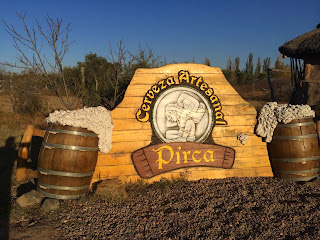 8) Villa General Belgrano, Argentina. Villa General Belgrano in Las Sierras de Cordoba in the Northern Argentina boasts one of the biggest Oktoberfests after Munich and Blumenau (Brazil). Entering the town you'd be forgiven for thinking you'd arrived in a Bavarian village with its wooden chalet buildings, waiters dressed in lederhosen and apple strudel on the menus. We went the wrong time of year for Oktoberfest, but still managed to sample some of the local beers. I have to say the beer we found in town was not our favourite craft beer from our South American tour, but we have heard good things about the South American Oktoberfest. 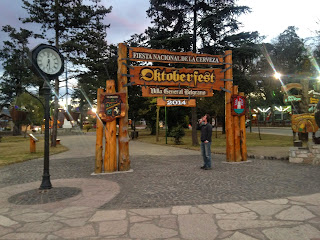 Have you tried craft beers in South America? What was your favourite? Any recommendations for any beers we have missed?
Posted by Sarah at 21:46