Into the Colca Canyon

Arequipa is a ‘jumping off’ point for lots of hiking and adventure activities, including trekking into the Colca Canyon, which was thought to be the deepest canyon in the world at 3,400 metres, until its neighbour the Cotahusi Canyon was found to be 135 metres deeper.
There are lots of companies in Arequipa offering tours into the Colca Canyon, but having read up on it, I could see that there was a very doable round trip into the Canyon (with a night at the bottom at the ‘Oasis’) that we could do on our own. And generally we like to try and do things by ourselves where we can, particularly where the route looked as straight forward as this one did.

(We were also pre-warned of all of the potential pitfalls by reading Alex in Wanderland's post on her comedy of errors in trying to do the same trip).
We found out the bus times from the tourist office on Arequipa's main square the day before, bought some snacks, abandoned most of our luggage at the hostel we had been staying at and headed into the hills.
The bus from Arequipa to Cabanaconde, where we were going to start the mini-trek into the depths of the Canyon, took 6 hours on the public bus. It was an interesting journey up over snow peaked mountains and volcanoes. The snow worried us a little though - we hadn’t come prepared for weather quite that cold. Luckily, we descended again – back to (slightly) warmer climes.
Entering the area where the Colca Canyon starts, we were made a little bit too poor for comfort a warden got on our bus and asked for the 70 soles (around £14/$20) each for the tourist entrance ticket. I had completely forgotten that we needed to pay this and had forgotten to go for an extra trip to the cash point that morning as planned.
Looking at the amount of cash we were left with for our two day trip, I started to panic a little that we might run out. There was no chance of coming across a cash machine where we were going and very few places in Peru take cards, so we were going to have to be clever with our money.
It was dark when we arrived in Cabanaconde and we were immediately accosted by a lady offering us a room for the night for just 30 soles (£6). Luckily she accepted payment in US dollars, which meant we could hold on to some of our soles for a bit longer. The room she showed us was basic, but looked fine, so we took her up on her offer and headed out to find some dinner.
A park warden who had followed us to the hotel to check for our tourist ticket pointed us in the direction of “Pachamama” (which translates as mother earth) which she told us had a ‘buen ambiente’. We headed off in the direction she pointed and found a little gem of a hostel and restaurant, run by a Belgian-Peruvian couple. It was candle lit and really cosy with delicious pizza baked in a corner stone oven, which are quite common in the Andes. More importantly for us and our cash-flow they accepted visa!
Up early the next morning and my breath was taken away to see the beautiful mountains around us that we hadn’t been able to enjoy in the dark the night before. 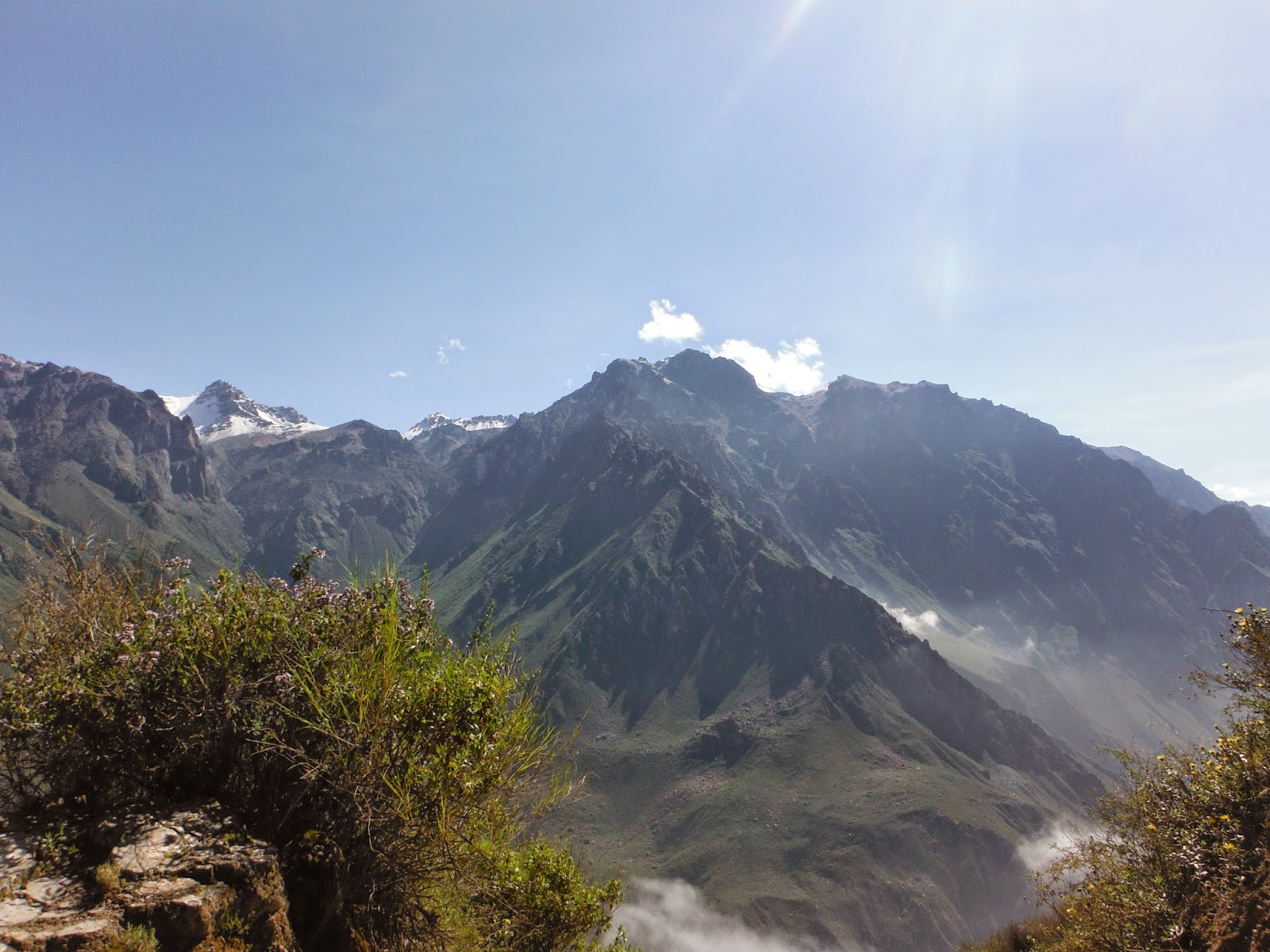 We found breakfast in a small shop on the main square and then headed off in the direction of the trail.
We followed a herd of sheep and their shepherd out of town and we were joined by a limping dog who helped us find the beginning of the path from where we could see down into the valley and across to the oasis town where we planned to stay the night. We had hoped to see a condor or two, as this area is renowned for them and morning is the best time to see them but it wasn't to be.

Our route down to our first rest stop at San Juan took us around 3.5 hours. We passed maybe one or two tourists coming the other way, as well as a couple of locals transporting goods with the help of mules. It was very peaceful and picturesque, if a little wearing on the knees! 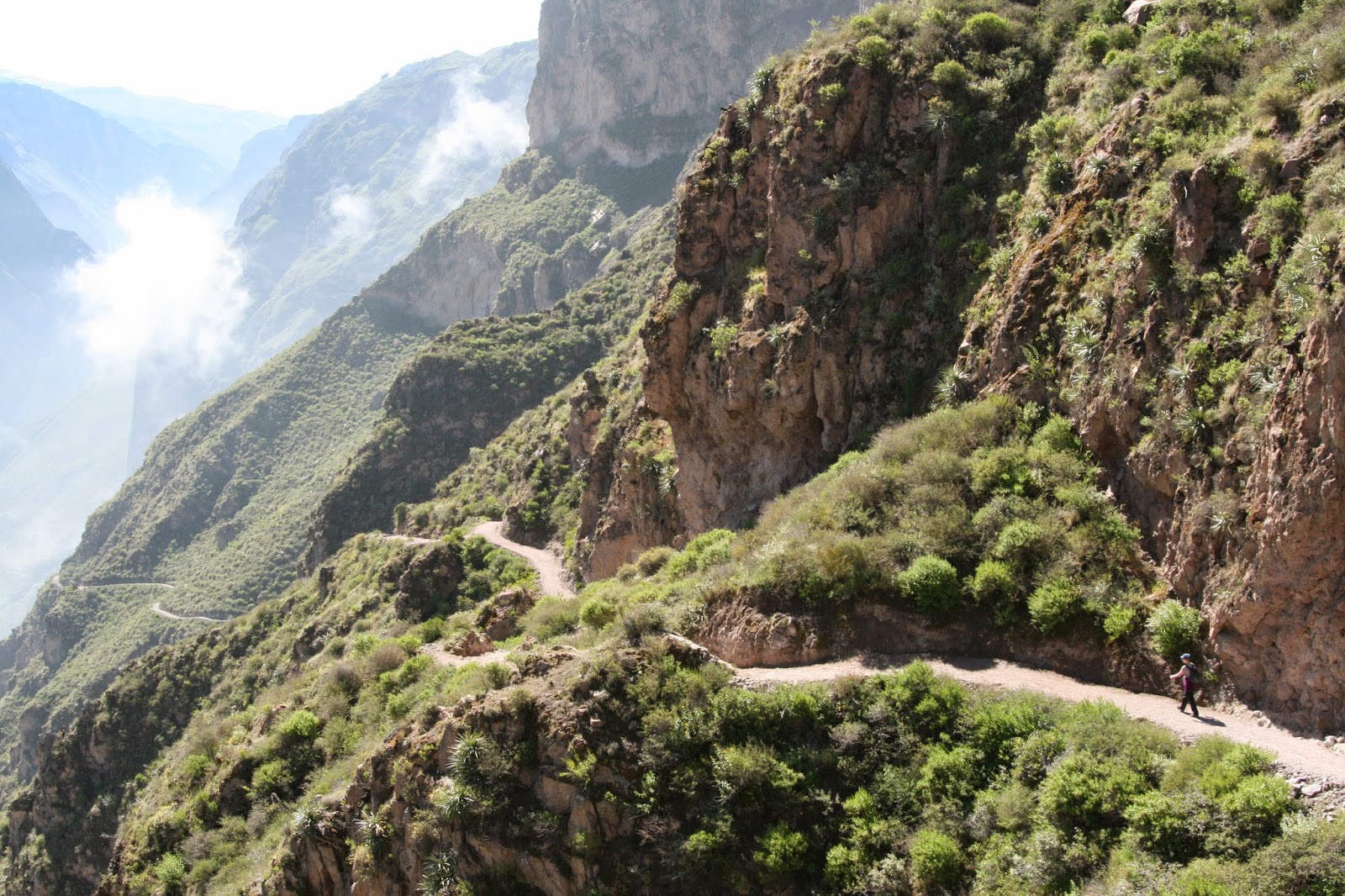 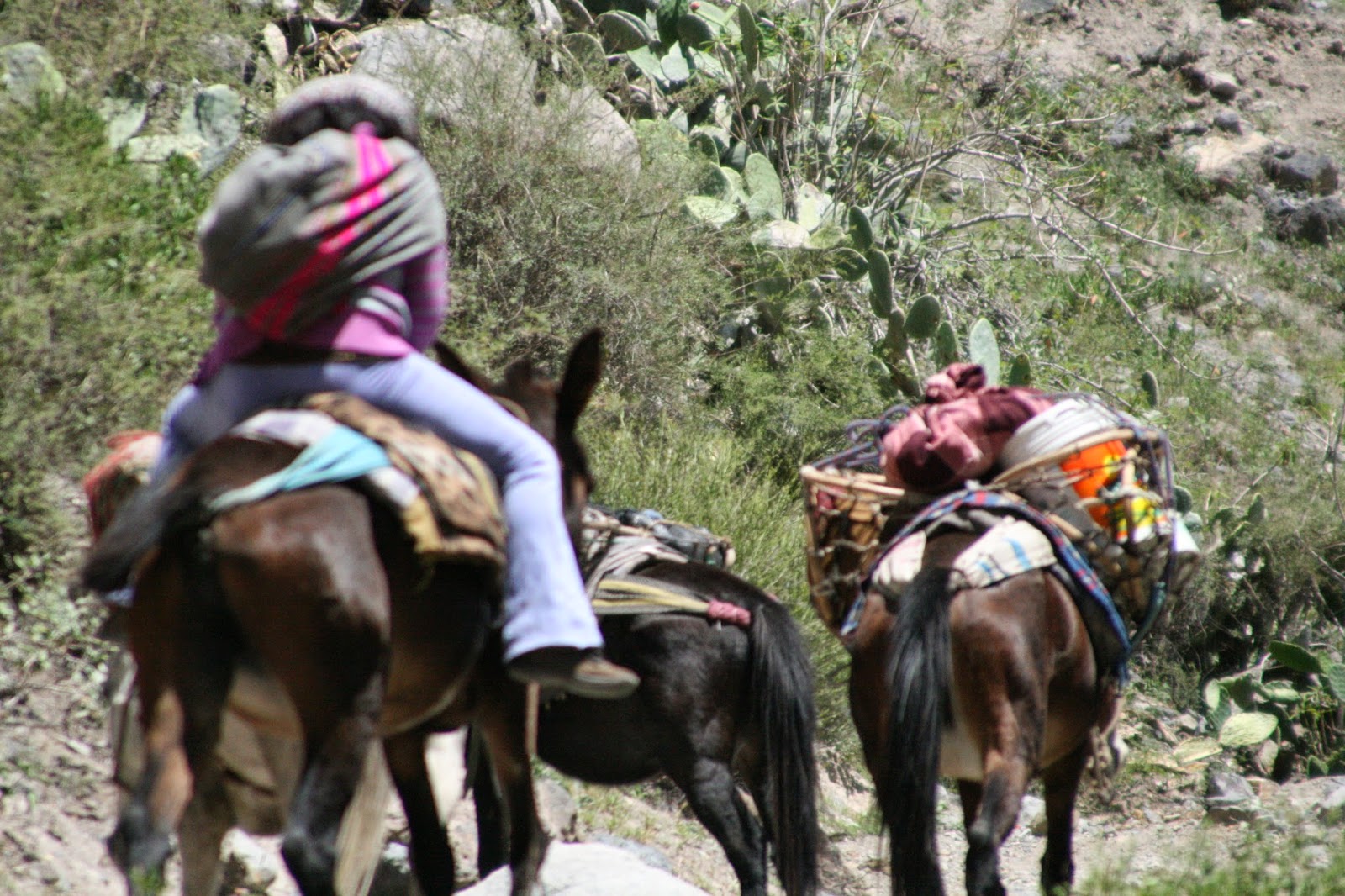 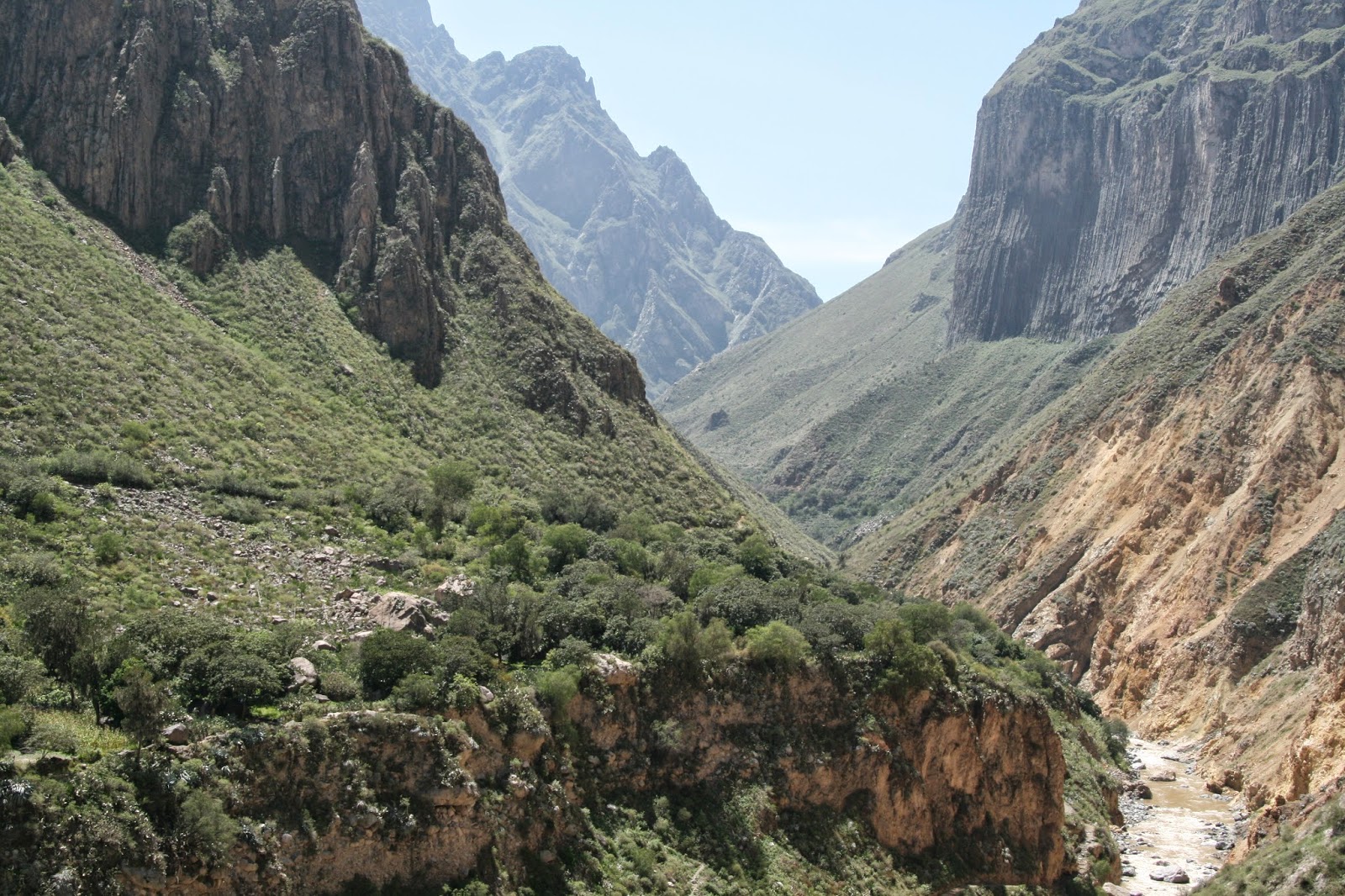 Stopping for a drink we met Nick and Marshall – an American couple doing the same walk as us. They had also found themselves a dog to accompany them on their walk and when they got up to continue, our dog left with them, abandoning us to do the rest of the walk by ourselves.

We continued on through pretty countryside and small villages - many of which are unreachable by road - enjoying the panaromic views around us. 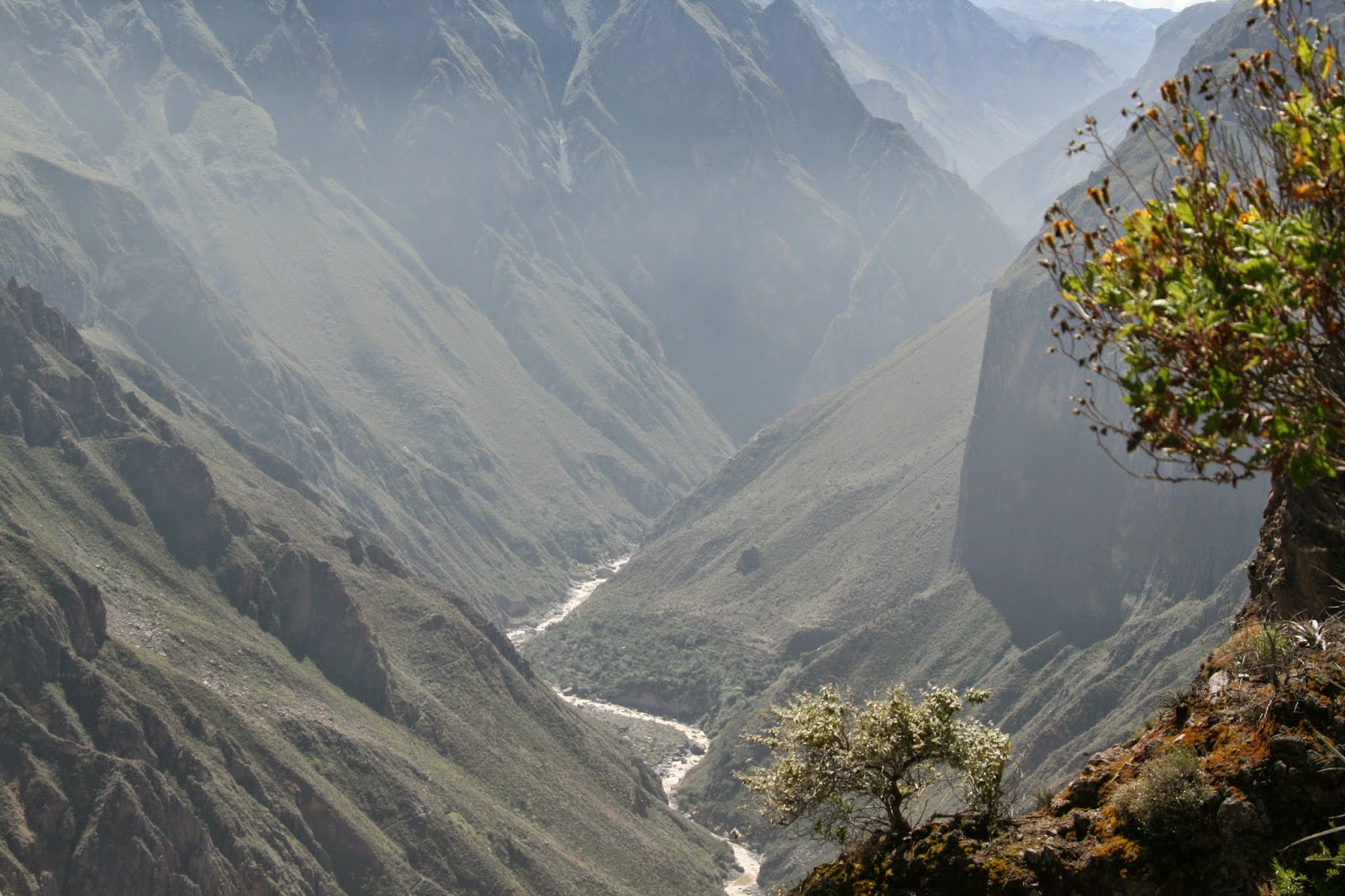 The women in this area of Peru wear embroidered hats and colourful skirts and all were warm and friendly towards us as we passed through and around the canyon and made our way to the oasis at the bottom.
Finally arriving in the oasis at around 3.30/4pm, we found ourselves a hut for the night and jumped into one of the swimming pools to cool off, before rewarding ourselves with a cold beer, which we assured ourselves we deserved. 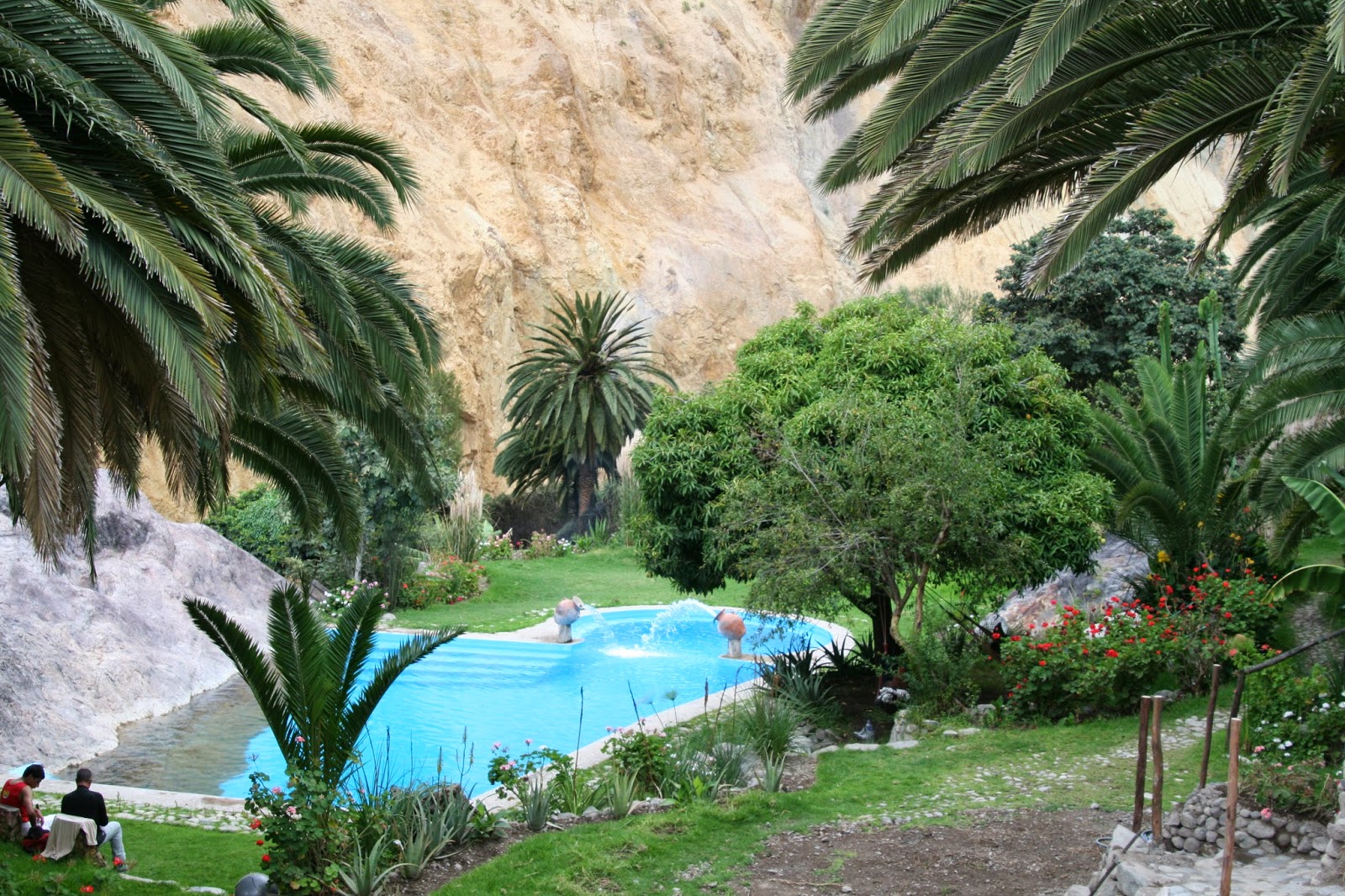 The next morning we were up bright and early for the gruelling 3 hour walk straight up back to Cabanaconde and our bus back to Arequipa. It was possible to cheat at this point and hire a mule for the way back up, but we puffed our way to the top. This was good preparation for the Inca Trail, although it didn't feel like it was good for anything at the time!


All in all, it was a very successful trip. We saw very few people, even fewer tourists and it felt like we had the whole canyon to ourselves at times.
And then it was back on the bus to Arequipa, where we spent a few more days relaxing, before heading to Cusco.