So we made it!

After 3 long days of walking and a very early start on the fourth, the “champions team” - as we were very aptly named by our guide, Valentin from Alpaca Expeditions - were a very close second through the sun gate to arrive at Machu Picchu at around 6 in the morning. 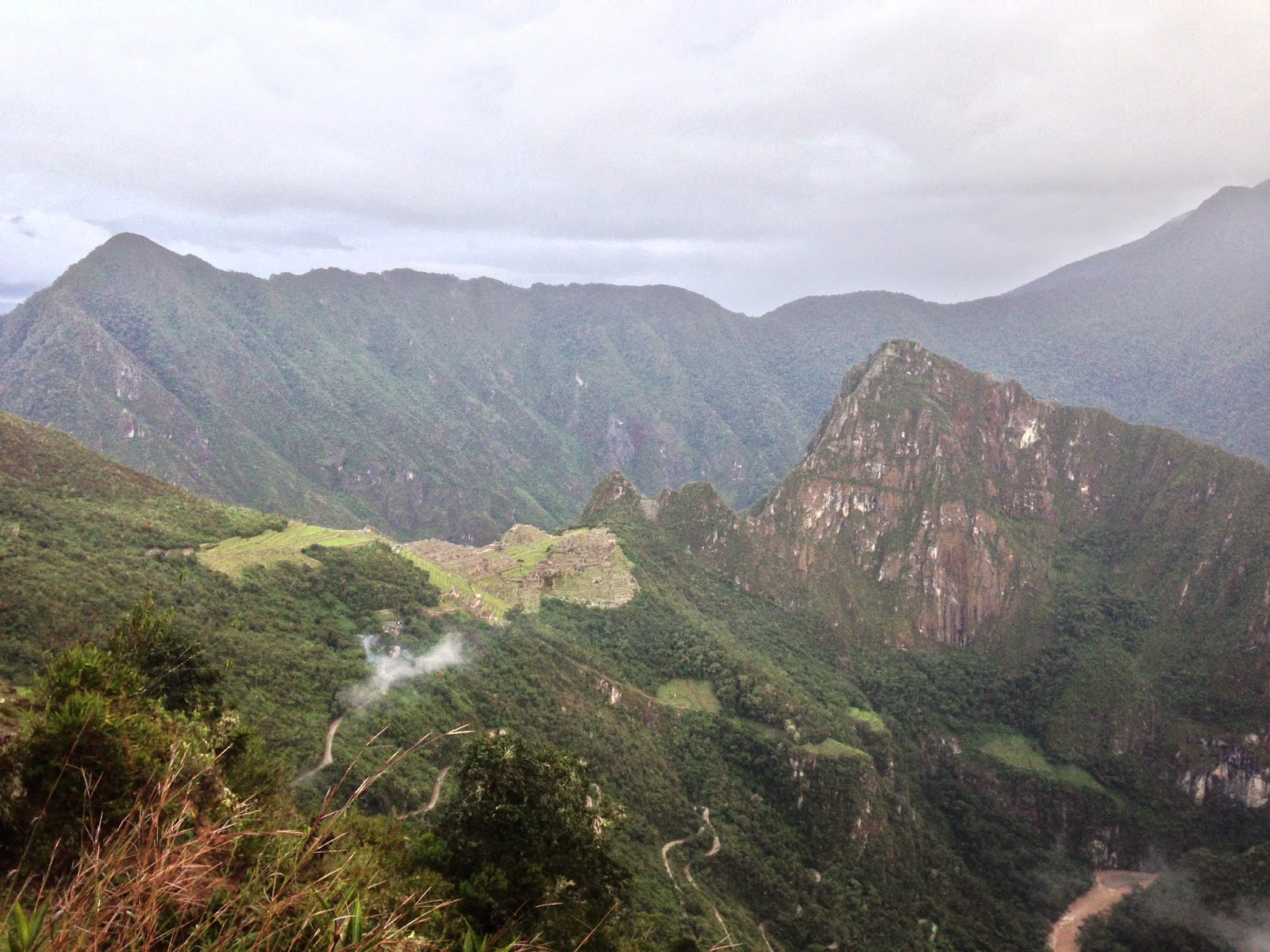 The sight greeting us was as beautiful as I had imagined. There was mist hanging over the mountains below us and it was drizzling, but we could still see the whole site before us.

And if anything the mist added to the view and made it seem even more surreal that we were finally there!. 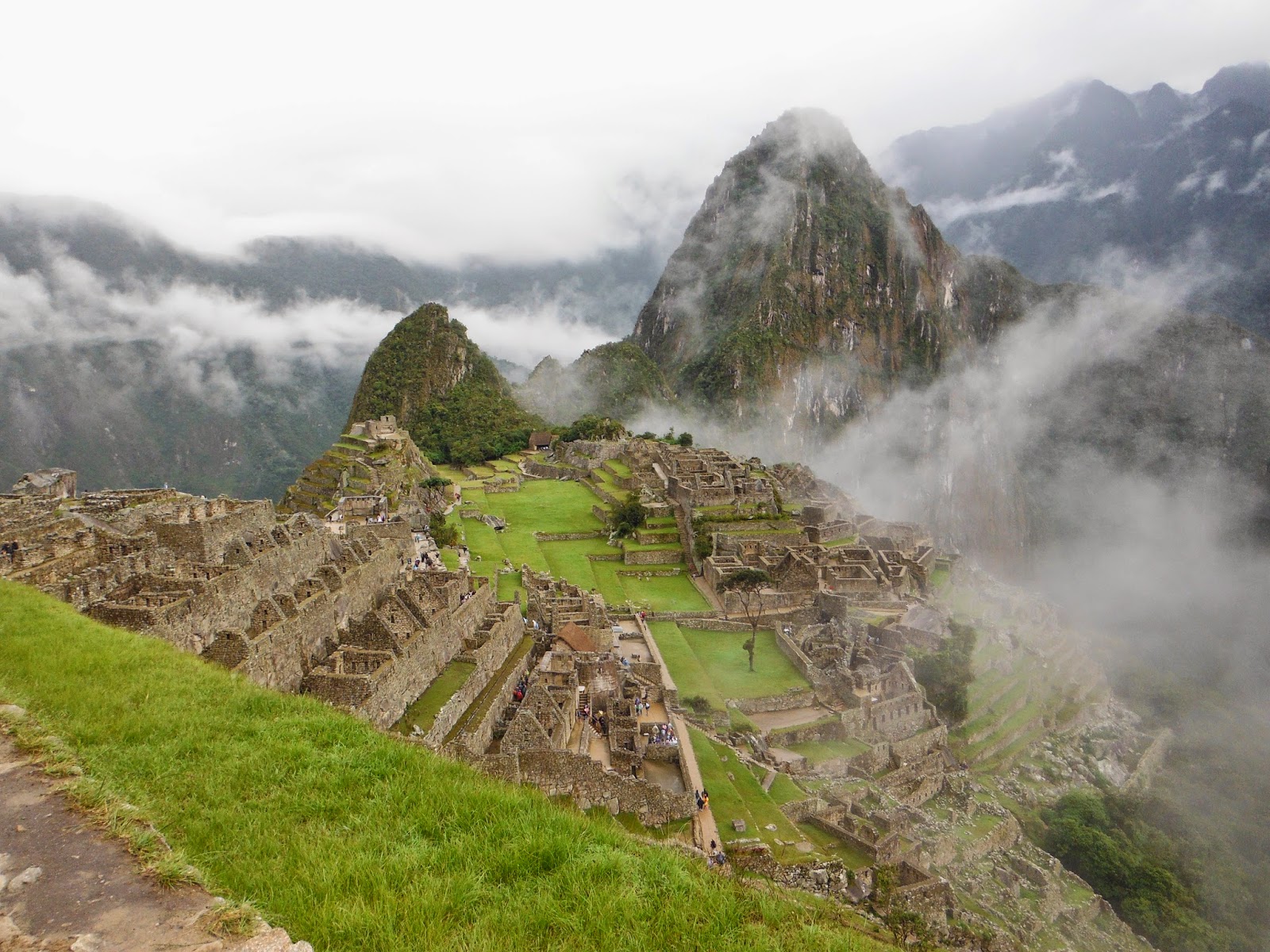 Four days earlier, 6 of our group (James and I, Amanda and Victor, and Nicole and Alex) clambered into a mini-bus in Cusco and headed towards KM 82 to start the trek.

Sindy and Pious the final two members of the team had missed their flight to Cusco and so were being picked up directly at the airport and brought directly to the start of the trail. They arrived – a little weary looking - while we were having breakfast. Shortly after we set off for the start. 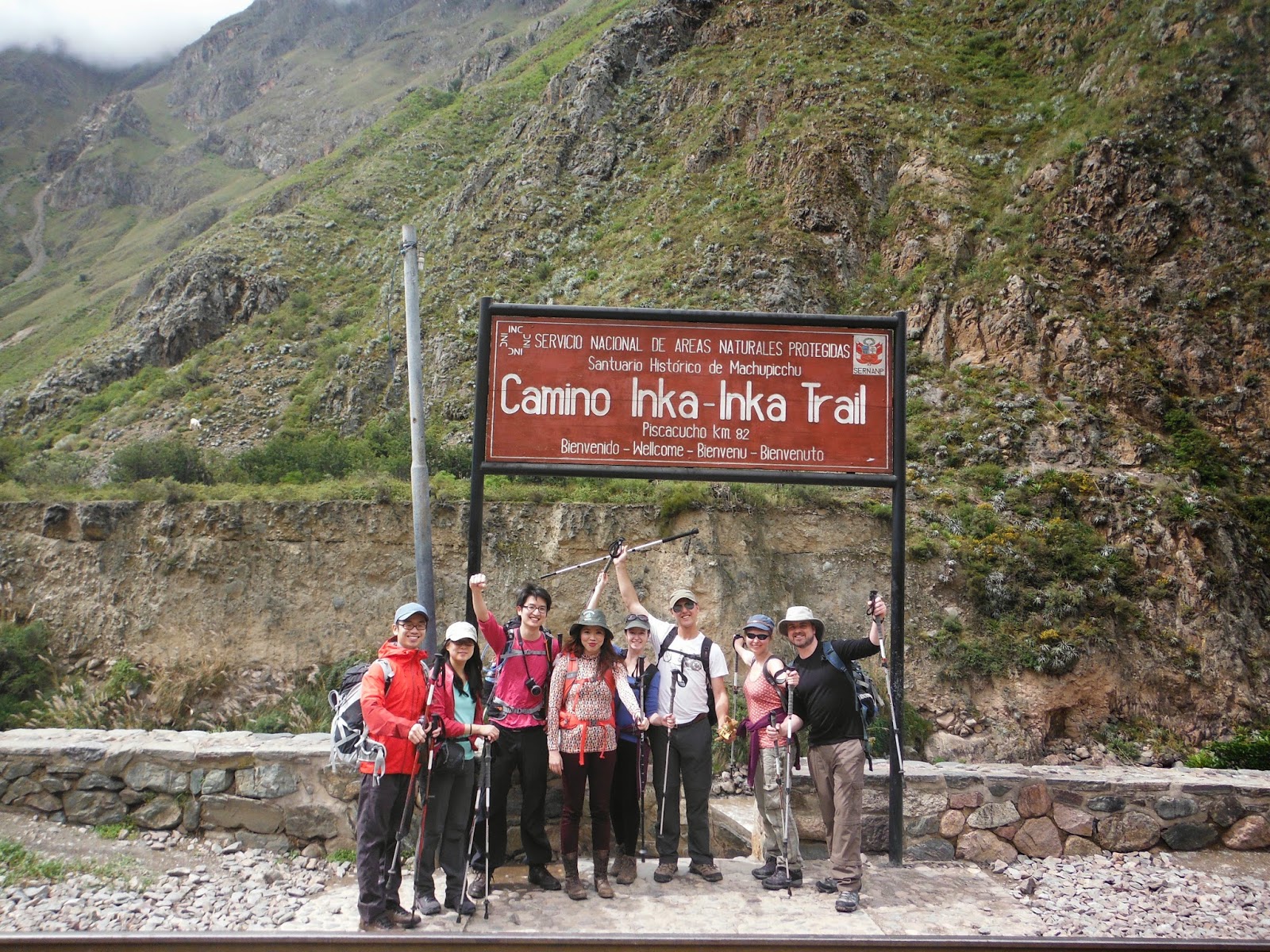 Passing through the checkpoint, we had to show our passports, which were duly stamped with special Inca Trail stamps and then we were off - which I was quite excited about. 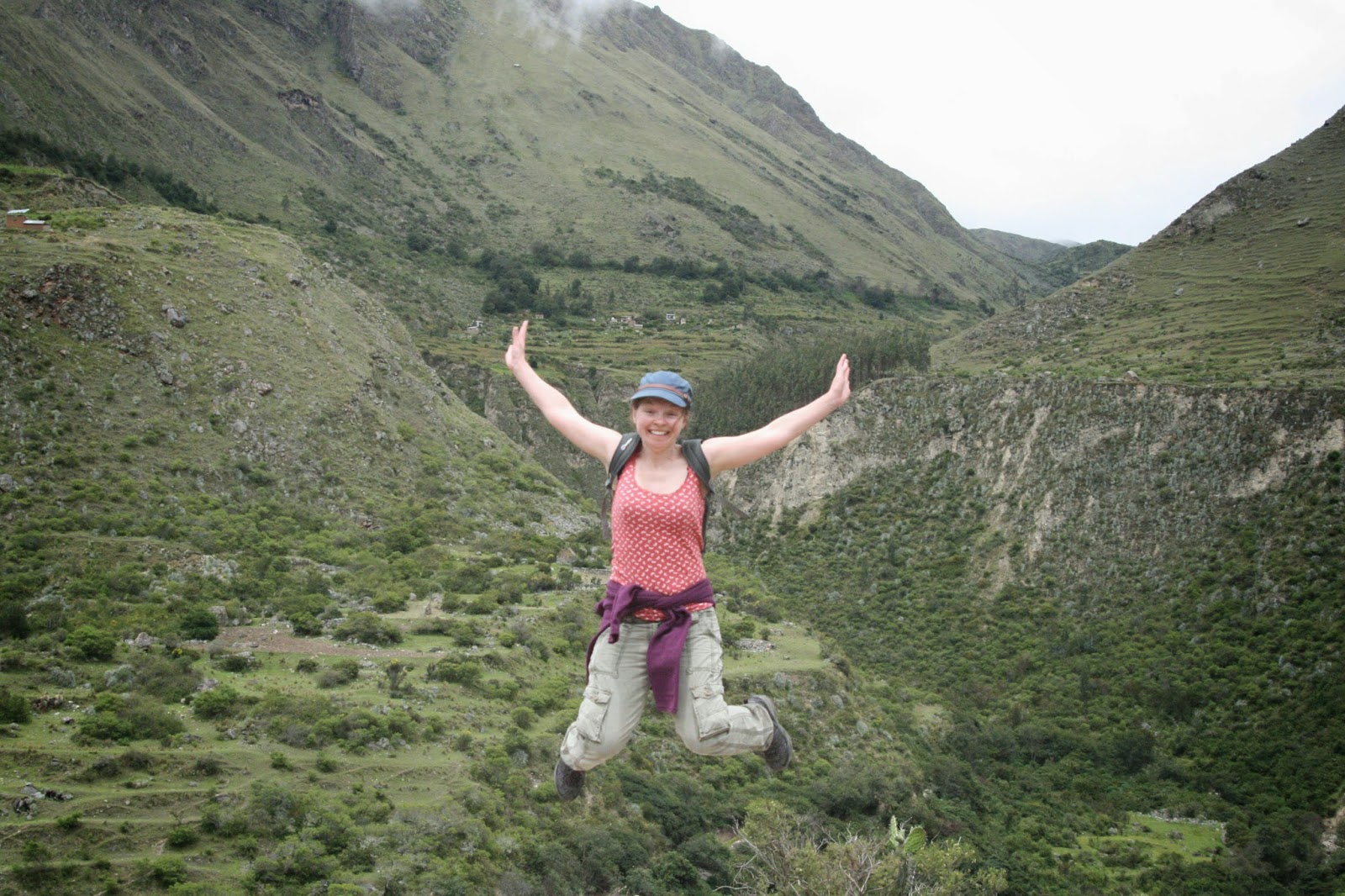 The first day's walk, particularly before lunch, was not too taxing. We passed some interesting ruins and learnt about how the trail that had originally run from Cusco all the way to Machu Picchu, would have been walked along by Incas as a kind of pilgrimage for summer or winter solstice. The beautiful scenery that surrounded us helped me understand why the Incas would have felt that this was a sacred journey to make and why they would look to the mountains as something worthy of worship. 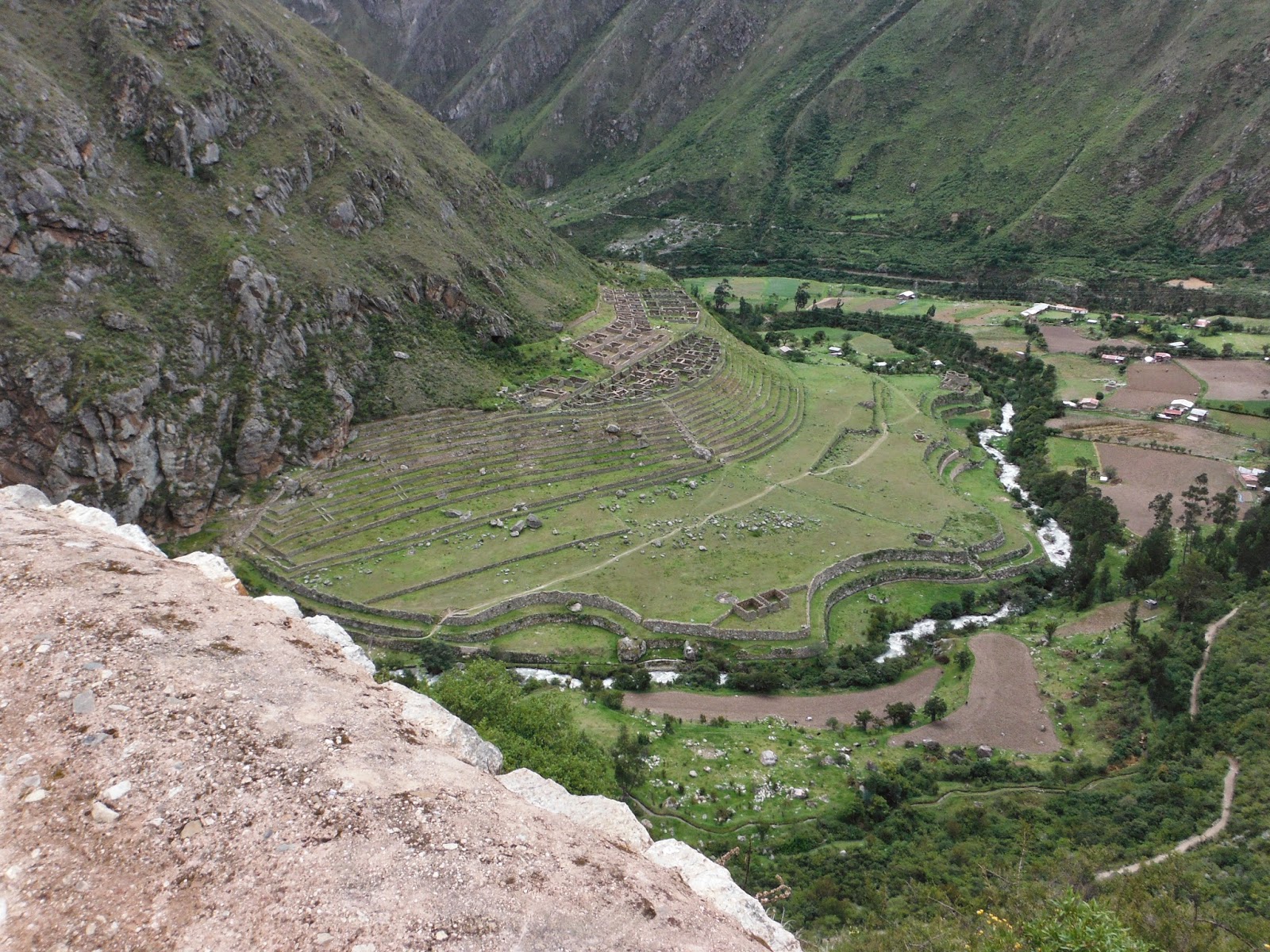 After a very generous first lunch and a welcome siesta (which I didn't realise I needed, but we had been up since 5.30), the afternoon did prove to be a little harder with stretches of uphill towards the end of the day, which Valentin described as ‘Inca flat’. And it was at this point that it became apparent that all was not well with everyone in the group. Sindy in particular was feeling the effects of having flown into Cusco that morning, having had very little sleep and no time at all to adapt to the altitude. Altitude sickness is a weird thing that seems to effect everyone differently and even the same person differently at different times. I was pleased that we'd had time in Cusco to acclimatise, although I still got out of breath much quicker than I do at a lower level.


We arrived at our first camp, and Valentin invited us for our first ‘happy hour’, which turned out to be popcorn and coca tea (which was much needed to help with the altitude), before regaling us with ghost stories as the sun set over the mountains. After dinner, we went almost immediately to bed, so we would be prepared for day 2 and dead woman's pass.

Woken early with a hot cup of coca tea that our porters brought to our tents, we then ate a hearty breakfast before setting off to the top of what was aptly renamed by Amanda as dead bitch's pass. And it was a bitch of a climb! But then who were we to complain with only small daypacks on our backs while our porters ran past us with tents, cooking equipment, food, our clothes and the 'piece de resistance' the portaloo. Alpaca Expeditions, who we went with are the only company on the Inca Trail that provide a private toilet … oh the luxury! 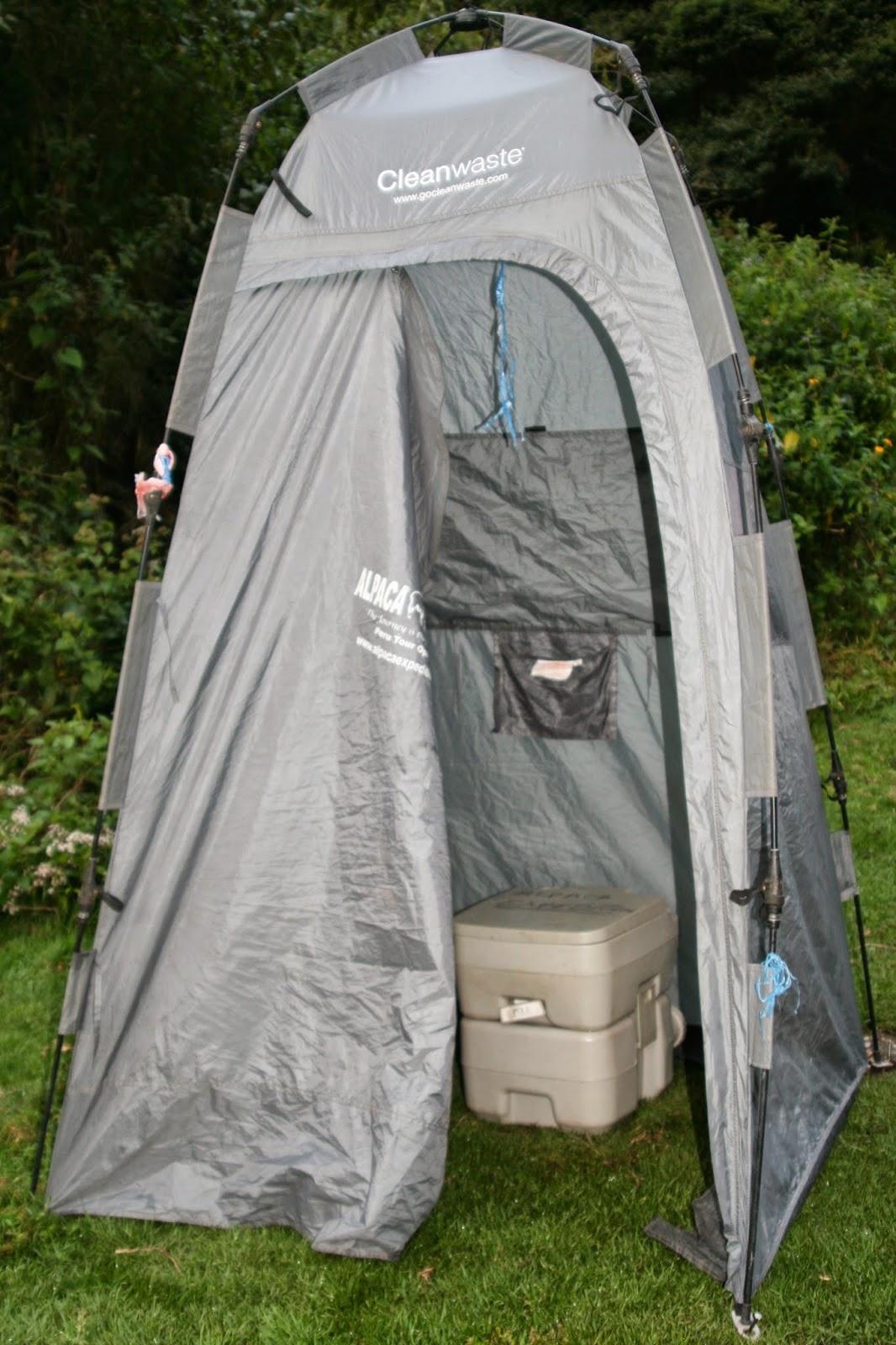 The view from the top of dead woman’s pass was worthy of the climb, but after pausing for a snack and take a few pictures, we didn’t hang around for too long as at 4198 metres, we started to get cold quite quickly.

So after all that up it was time to put our knees to the test and start going back down again! It was at this point I started to question why the Incas couldn’t have built a path that went round the mountains.

We had a rest at the bottom with lunch and a siesta, but while some groups settled down for the night at that point, we soldiered on up to the next pass and back into the clouds, passing some more Inca ruins. 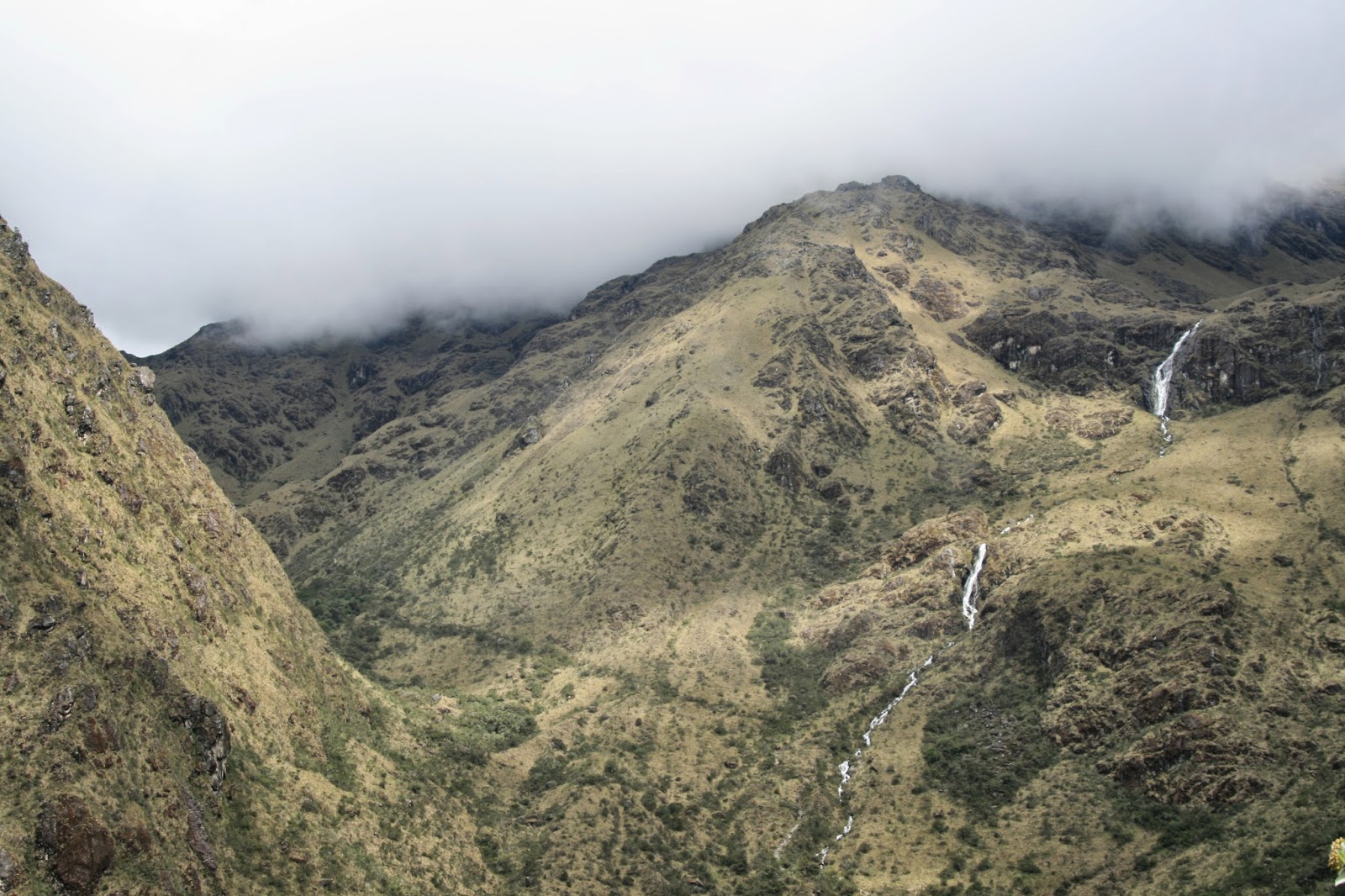 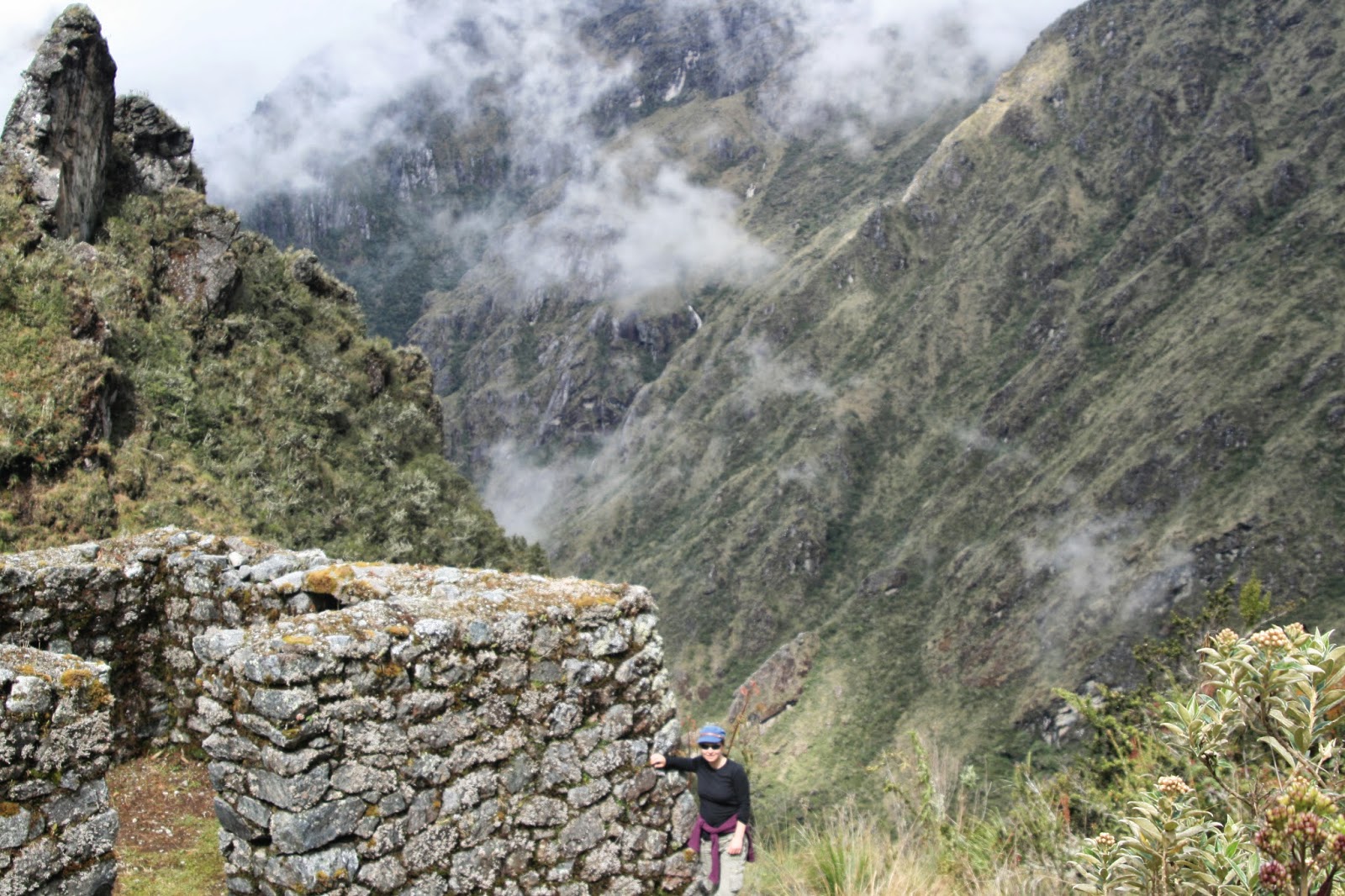 Before reaching our camp for the second night we visited some beautiful Inca ruins, which seemed to be visited by very few tourists. There were pretty flowers growing throughout the ruins and a majestic view of the surrounding mountains and valley.


The third day was a bit easier as we only had one pass left to go and there was only small bits of 'Inca flat'. After getting friendly with some lamas, we reached the campsite in the early afternoon. 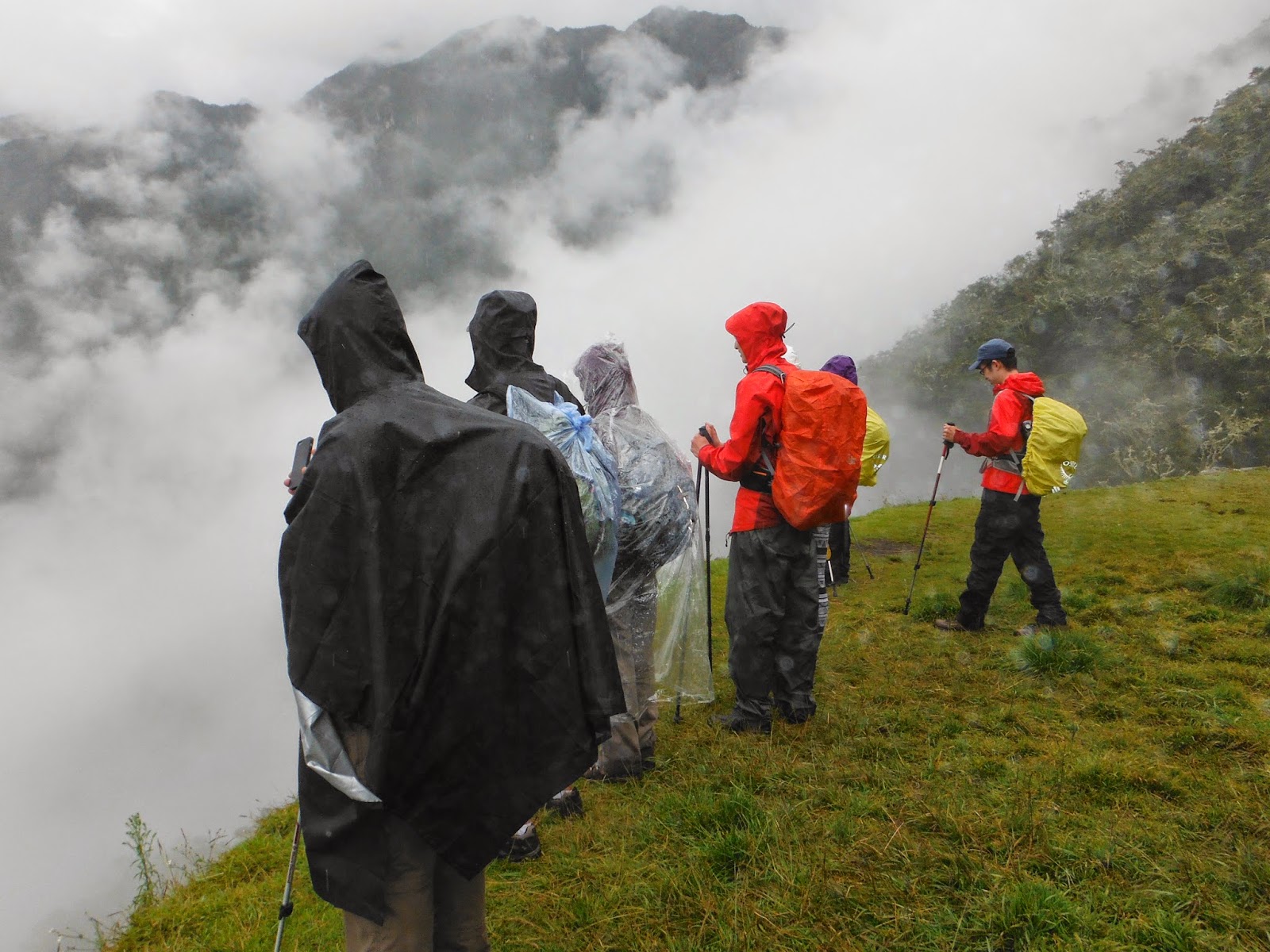 Our porters greeted us with a round of applause, before demonstrating an additional luxury available to our group and our group alone - a hot shower! They had brought a shower head with them, boiled some water and pumped it through into one of the shower cubicles. One by one we were all able to enjoy a very welcome hot shower.

In the late afternoon, we walked down to beautiful ruins nearby called Wiñay Wayna. We finally had a proper introduction to all of our porters and the cook. And found out that most of them are actually farmers who work as porters for extra income.


We headed back to camp for our final dinner together. As it was Alex's birthday that day and would be Victor's the next day, our amazing cook somehow managed to rustle up a birthday cake. There was also bunting and balloons!


We then planned our ‘strategy’ for the next day. We decided that we we'd go for the earliest start possible, so that we could be first in line when the trail opened at 5.30. This meant getting up at 3am! But we were first in line and within minutes of us arriving at the gate, there was a queue that stretched back as far as we could see, so for the sake of 30 minutes extra in bed, it was the right decision.

When the gate opened our group marched on through and we would have been first to the top, if it had not been for a couple of guys who must have run along most of the trail to get past us and reach the sun gate just right before we did. But it didn't matter. We'd survived the Inca Trail and made it to Machu Picchu in one piece. And it was definitely worth all the hard work. 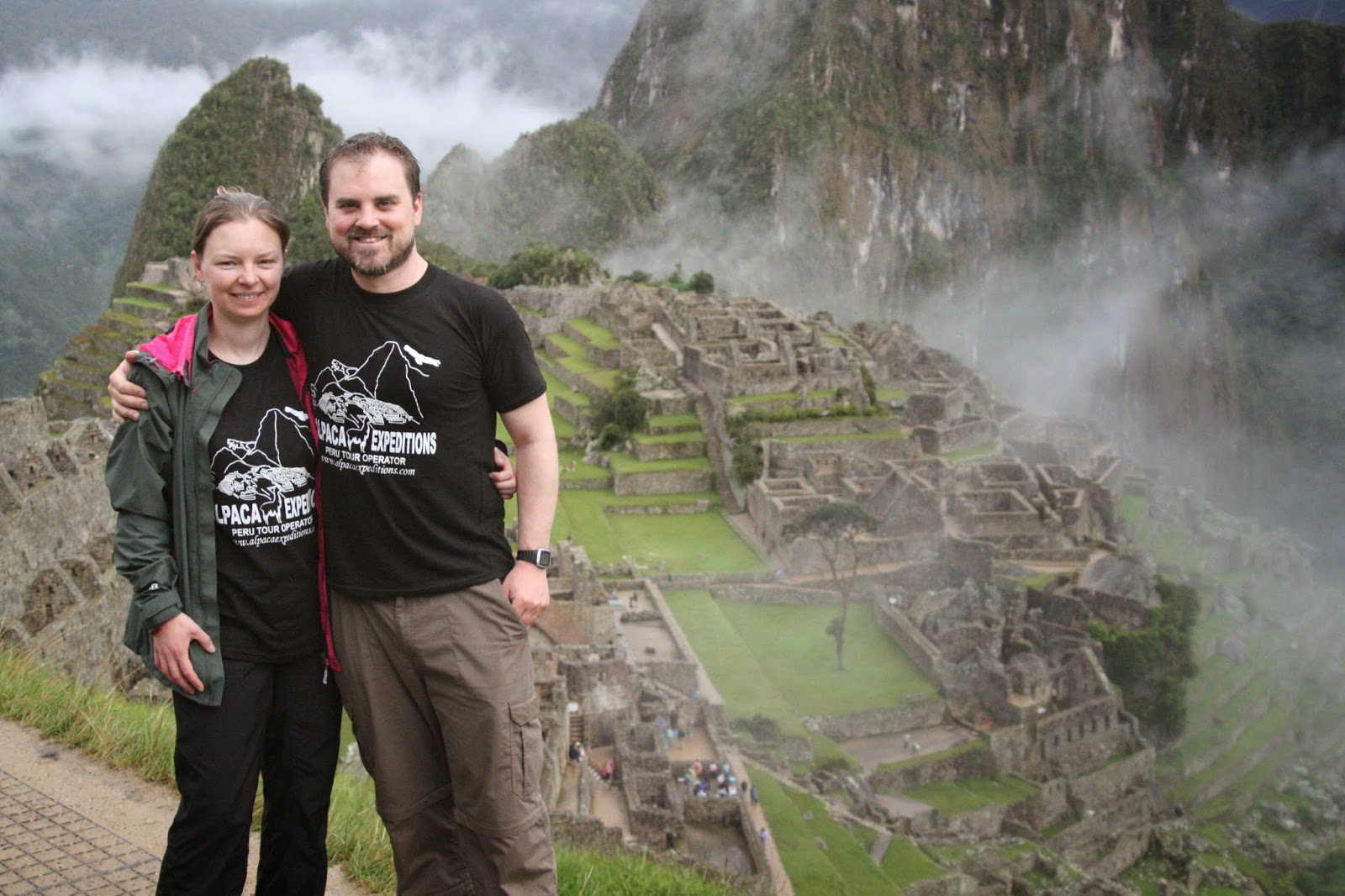 Trekking the Inca Trail
You need a guide and a permit to trek the Inca Trail. We went with Alpaca Expeditions, who gave us great service from the time we booked with them to getting us back to Cusco. Our guide was fantastic, as was the chef and all the porters. We would definitely recommend them. See: www.alpacaexpeditions.com

For more on our day in Machu Picchu, see: No jumping at Machu Picchu and definitely no streaking and Machu and Wayna Picchu.

Click here for more on our time in Peru.
Posted by Sarah at 18:13