On the Gringo Trail

On the coast south of Lima, there are a number of sights and activities, which collectively have become known as the Gringo trail.

I hadn’t actually realized this when I was planning our trip. However, looking at what there was to see and do between Lima and Cusco (from where we are booked on an Inca Trail tour, starting on 23rd March), I unknowingly managed to map out a perfect Gringo Trail route. So much for trying to get off the beaten track!

First stop: Pisco of Pisco sour fame and a jumping off point for the so called ‘poor man’s Gallapagos’ or Islas Ballestas and the Paracas national park.

There isn’t much to see in Pisco itself. Wandering around town, we came across the cemetery, which includes the grave of Sarah Ellen Roberts – apparently an English vampire who, legend has it, was buried here, after the Church of England refused to bury her on consecrated ground. Her husband travelled the world to find somewhere that would take his wife’s remains. And Pisco was the place!

I was also particularly intrigued by how most people did not seem to be 'buried' as such in this cemetery, but rather stone graves are built one on top of another. 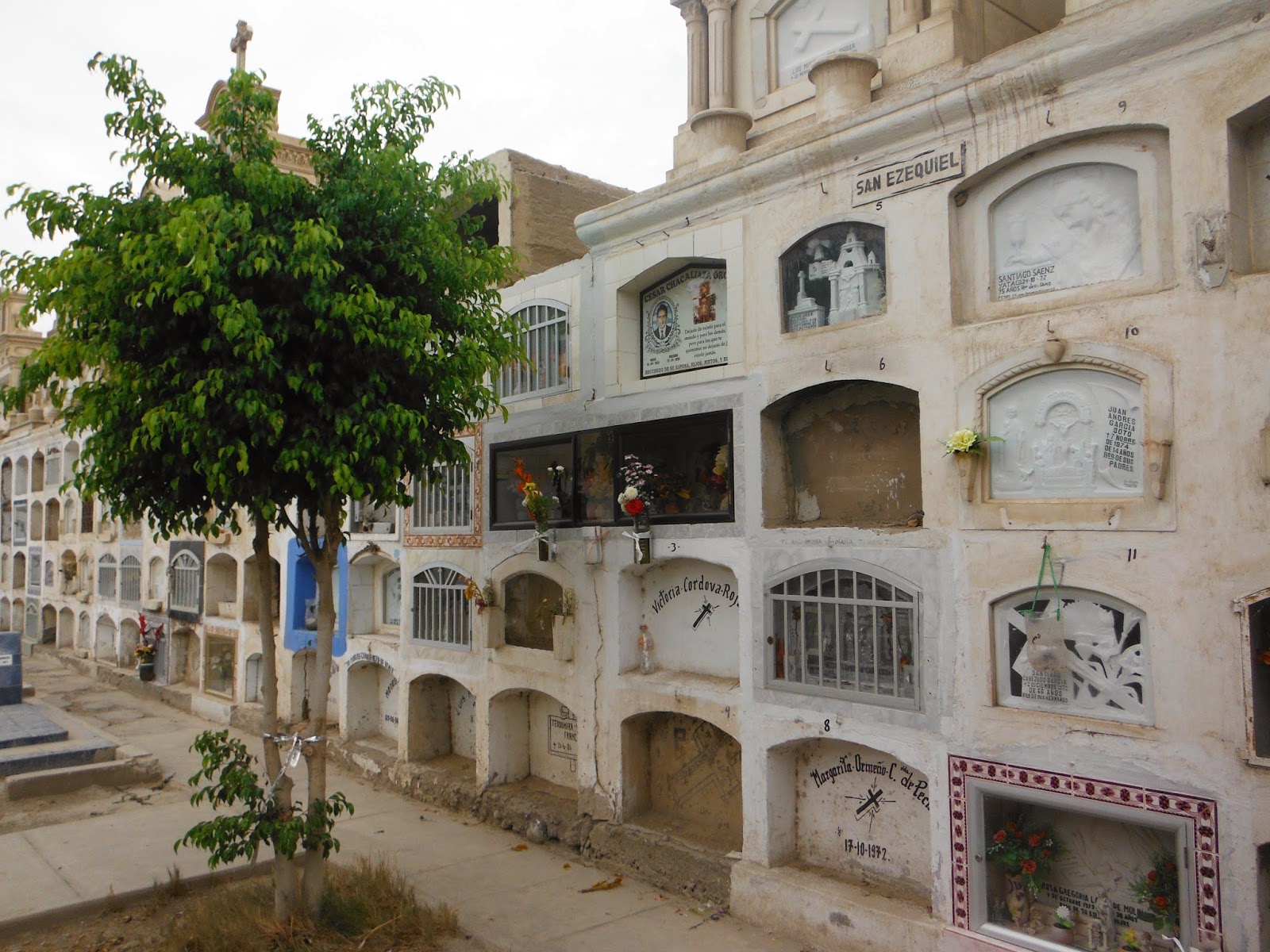 Our evening’s entertainment in this quite sleepy town included watching kung fu movies in the street with the locals (and some obligatory Pisco Sour). 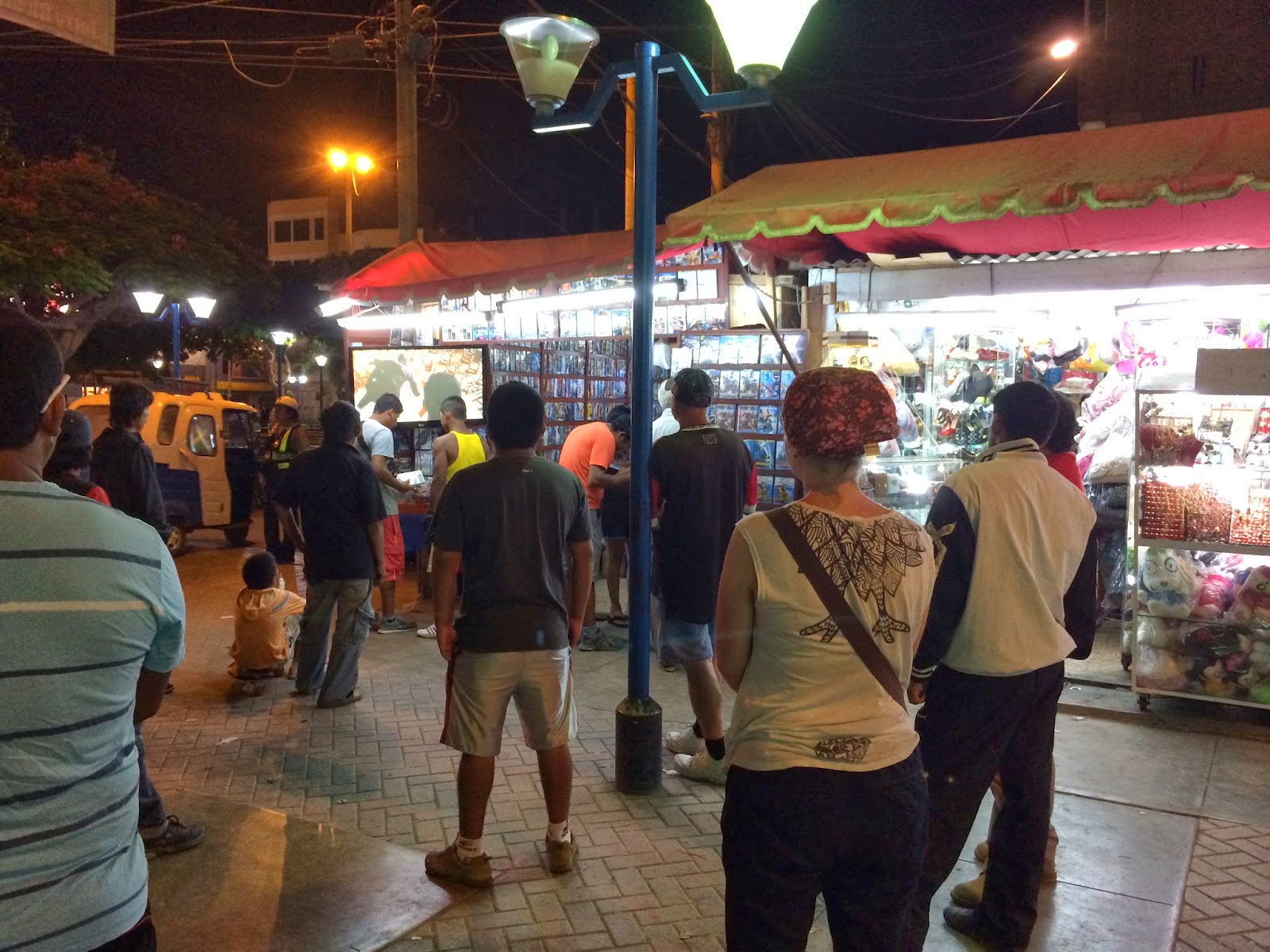 The next morning we headed out on a boat to the Islas Ballestas, which were teaming with life. The highlight was what the guide called the ‘maternity beach’ where there were hundreds of baby sealions. We also saw penguins and lots of different types of birds, including ‘guano birds’. The islands had been used for years as a place where Peruvians harvested guano or bird poo to sell as fertilizer, mostly to the UK and France. As the guide quipped “we’ve been selling you shit for years”. 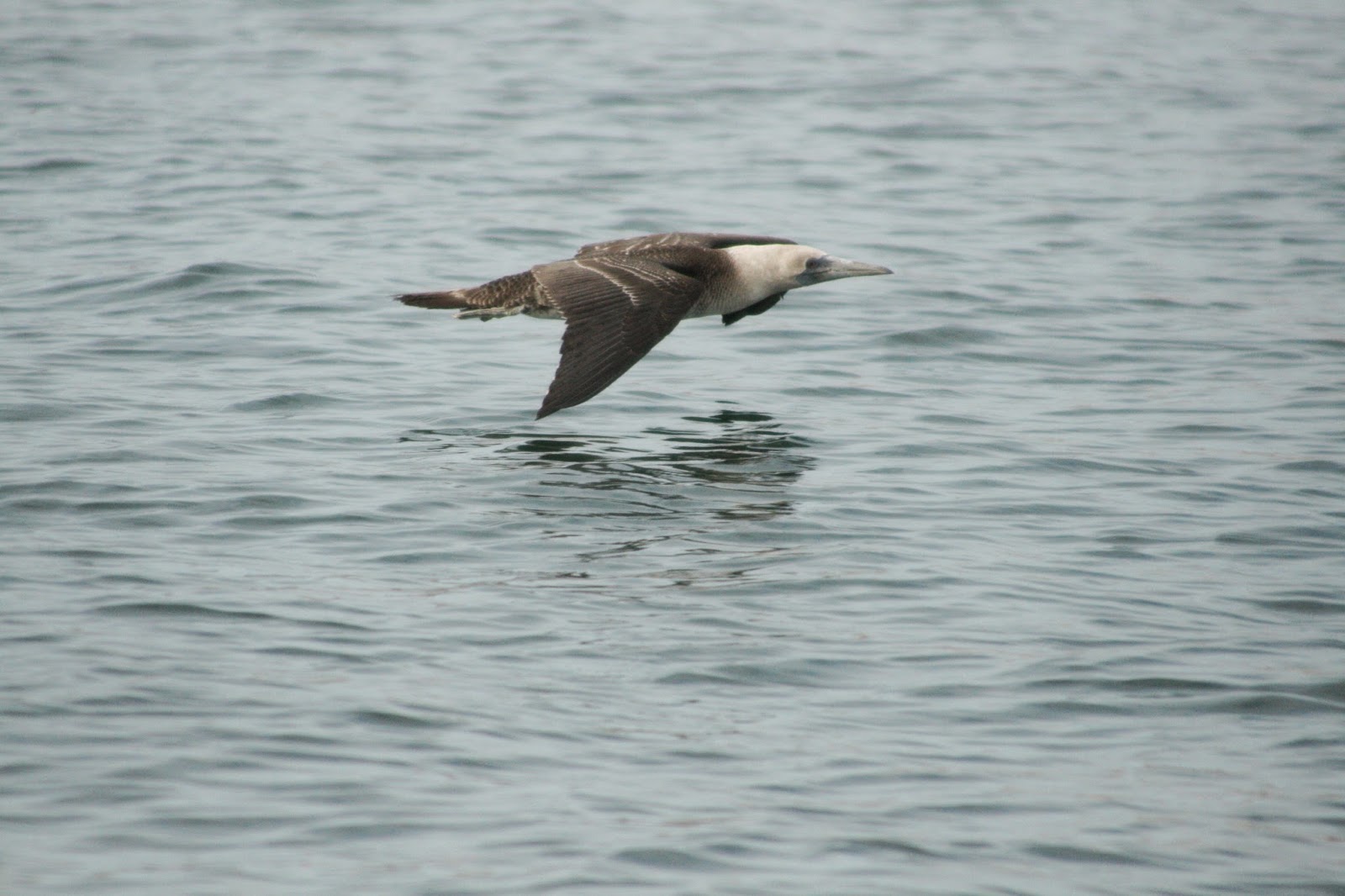 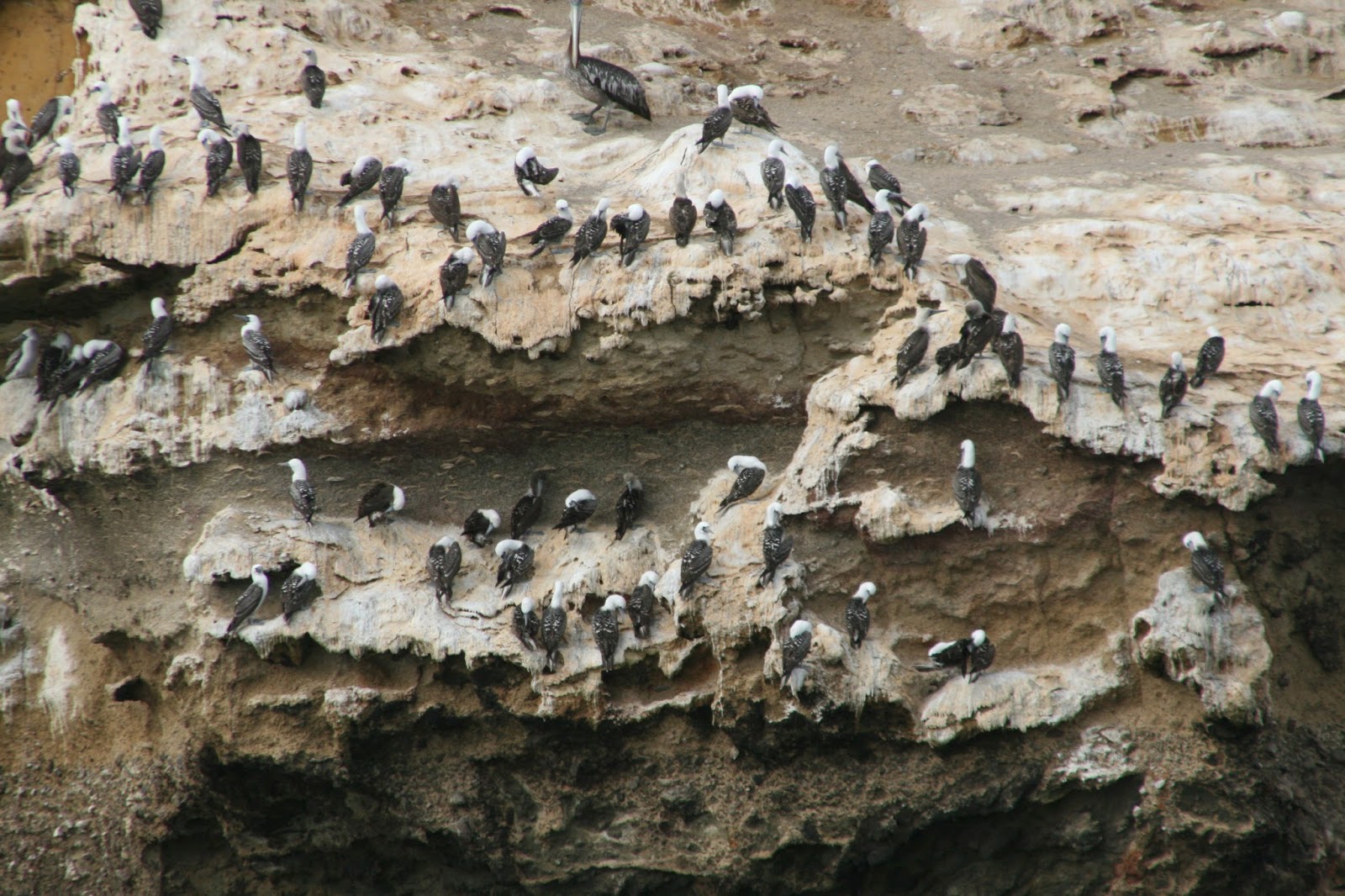 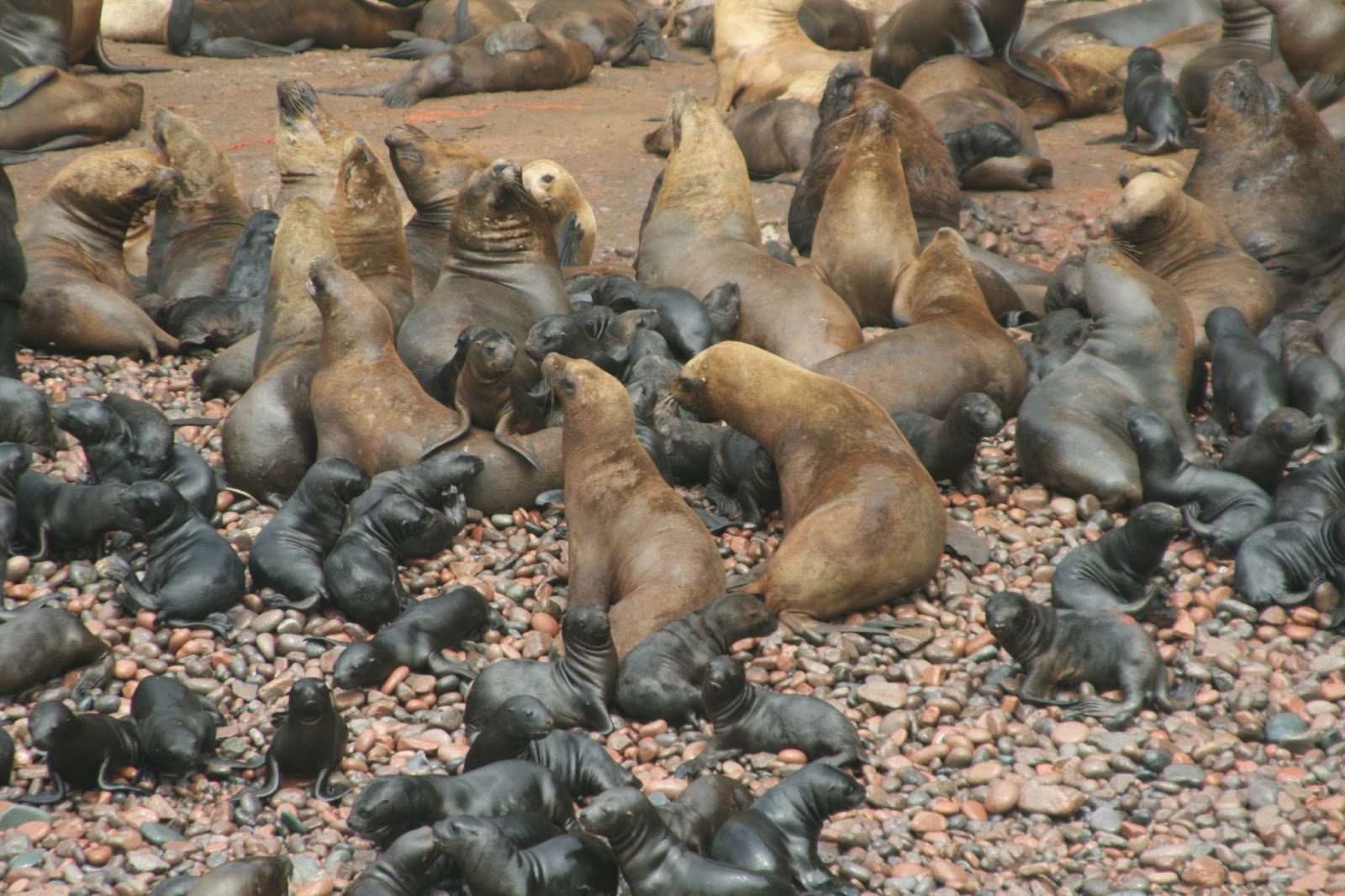 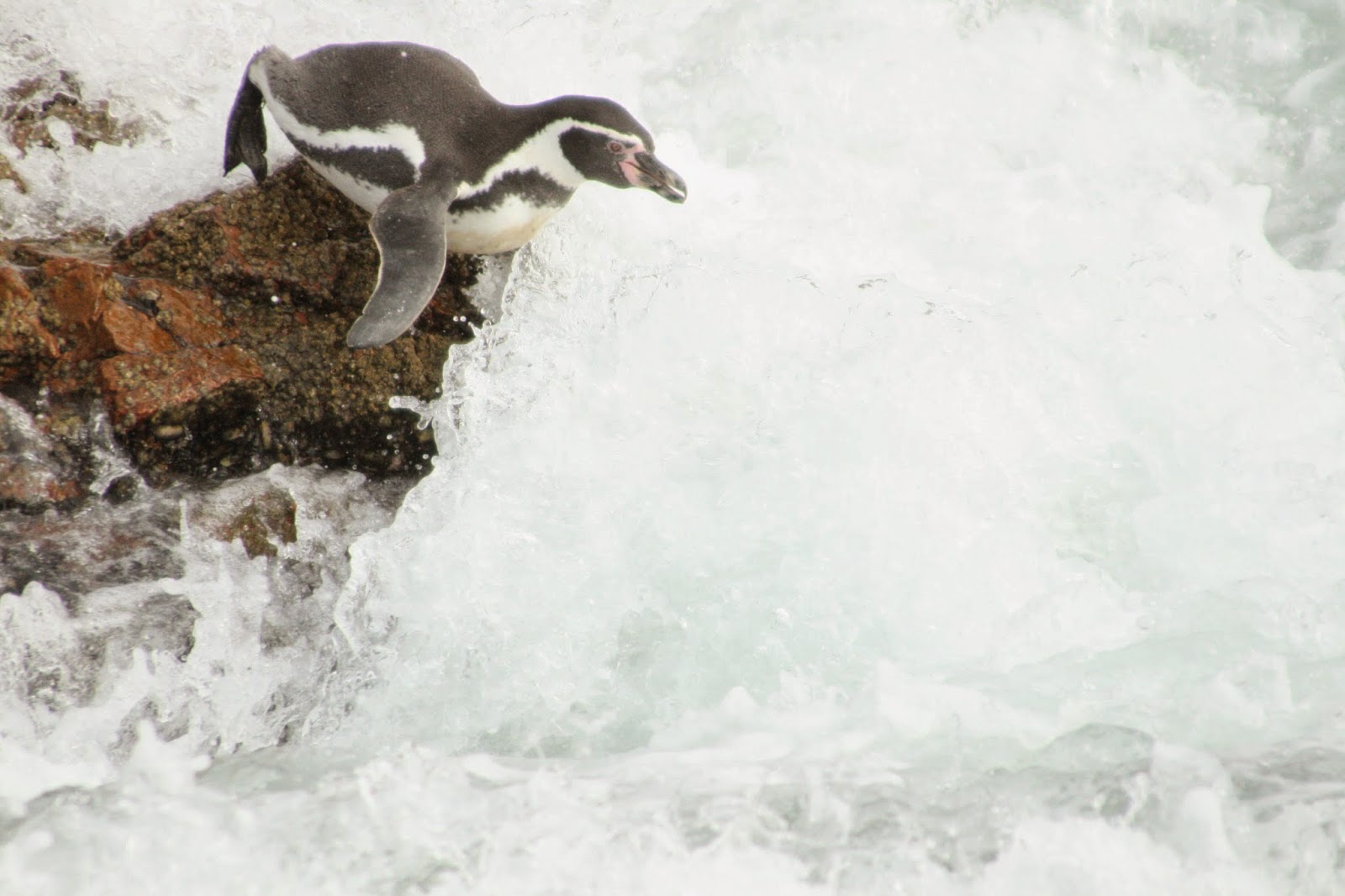 The afternoon trip to the Paracas national park was included in the tour we had bought the previous day, although our 'guide' from the agency seemed to be winging it in order to find us a driver and a promised English speaking guide. After a number of false starts, we were joined in our taxi by a local and an Austrian traveller and we followed a minibus, which seemed to be a more legitimate tour group and shared their English speaking guide.

The trip allowed us to see beautiful coastline set on a backdrop of a desert peninsula. We missed the time of year when the park has a flamingo population and so although our/their (!) guide was very good in explaining the geography of the area and the impact of the huge 2007 earthquake, I wouldn’t have felt we’d missed too much if we hadn’t gone on this trip. 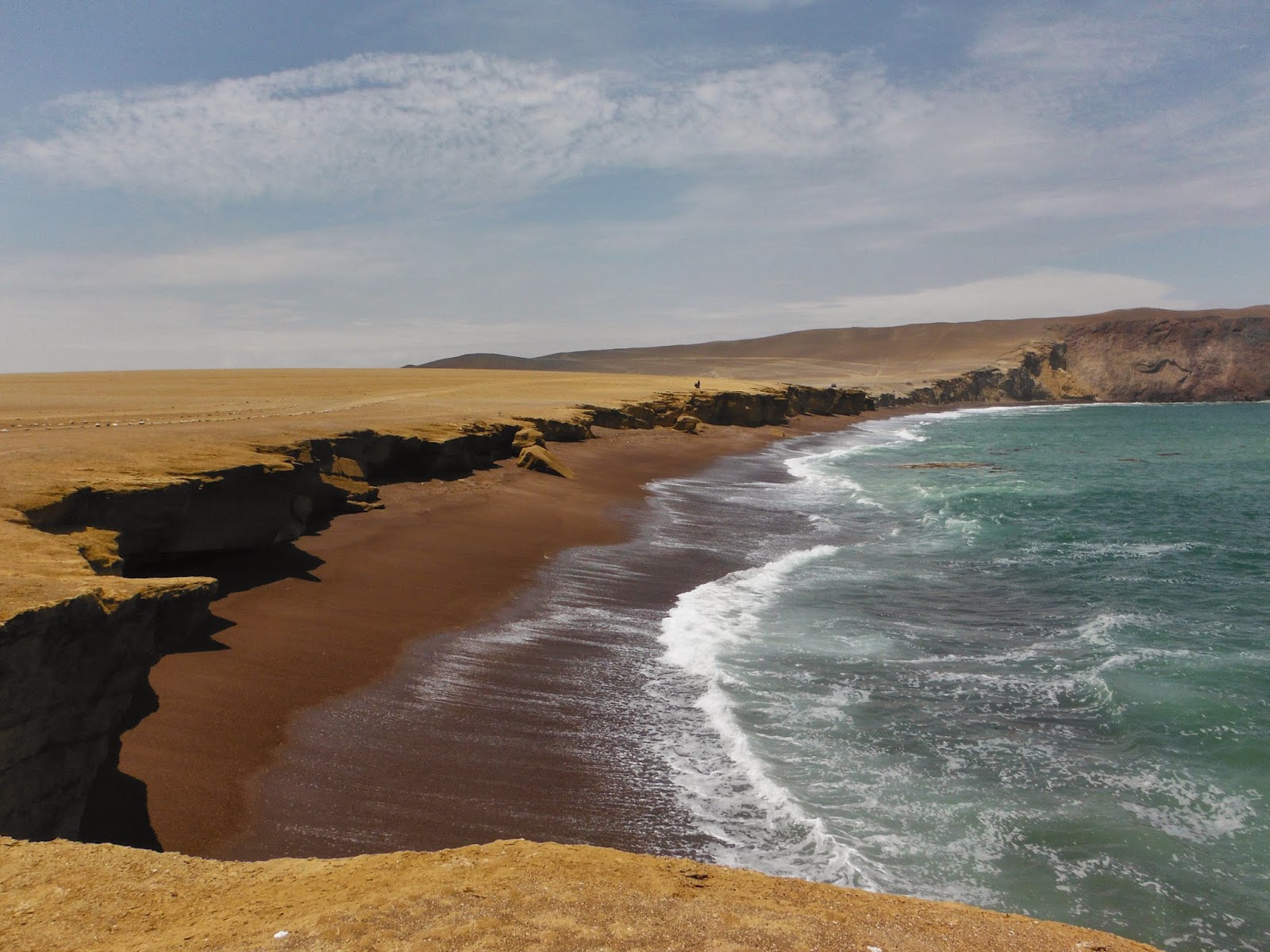 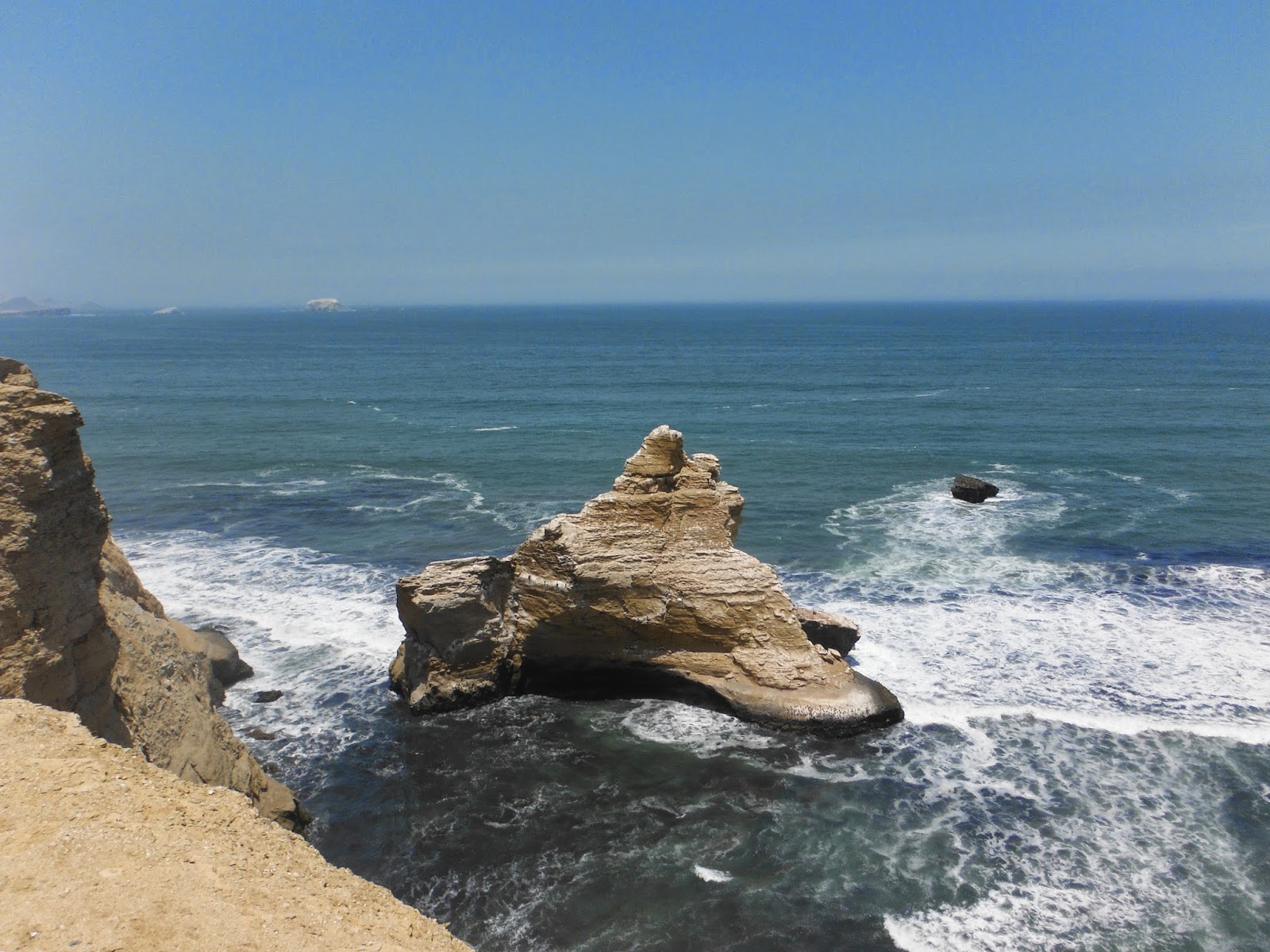 Second stop on the Gringo trail: Huacachina – an oasis in the Peruvian desert. The main activity from here is a white knuckle ride of a buggy tour into the desert and then sandboarding down the dunes. The buggy tour was a lot of fun, if a little hair-raising.

We got the hang of the sandboarding quite quickly, but James was particularly adept at the sand ‘skeleton’ and was soon hurtling down the dunes, almost taking out another tourist. Then it was back on the buggy to watch the sun set over the dunes. 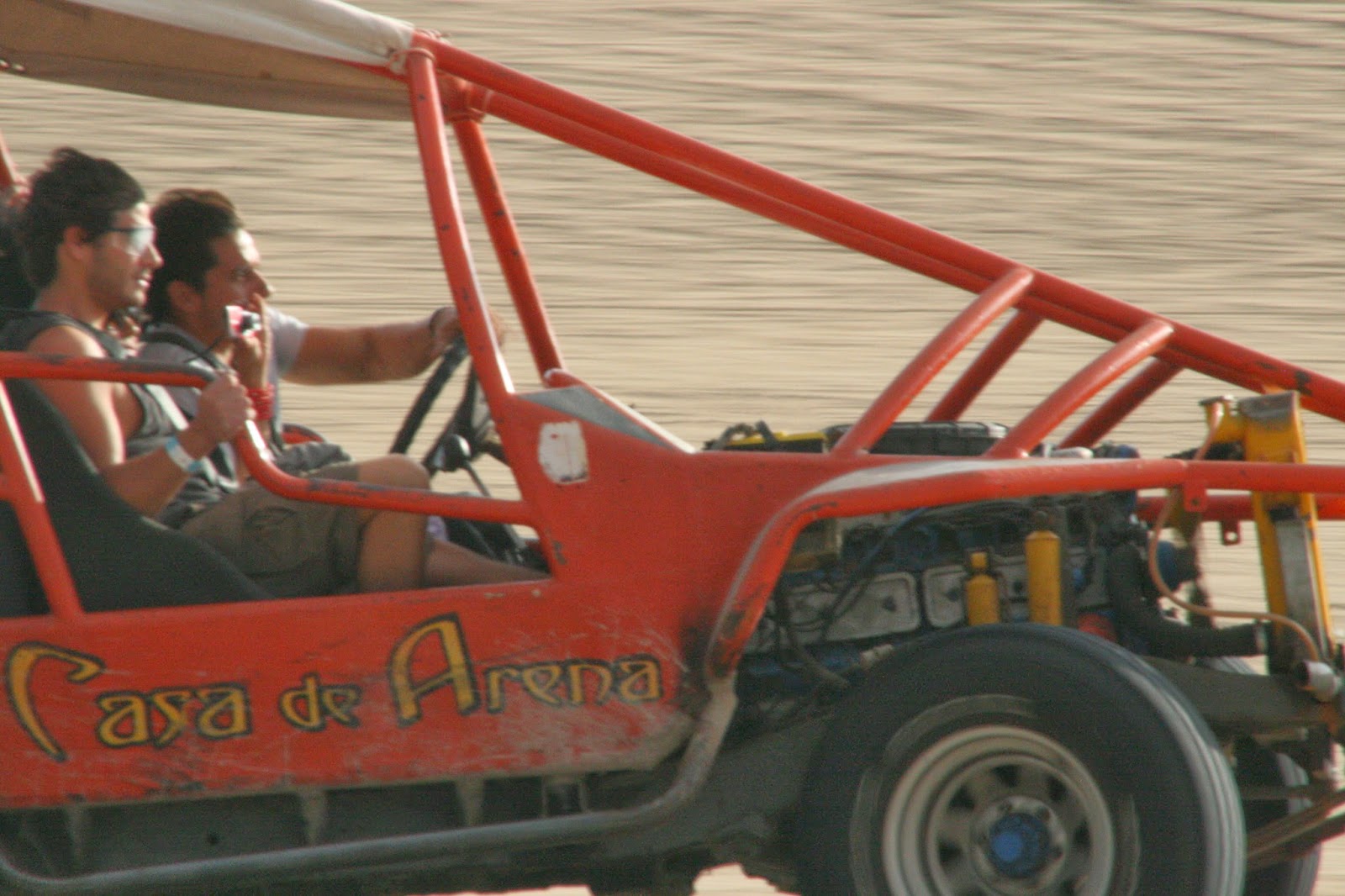 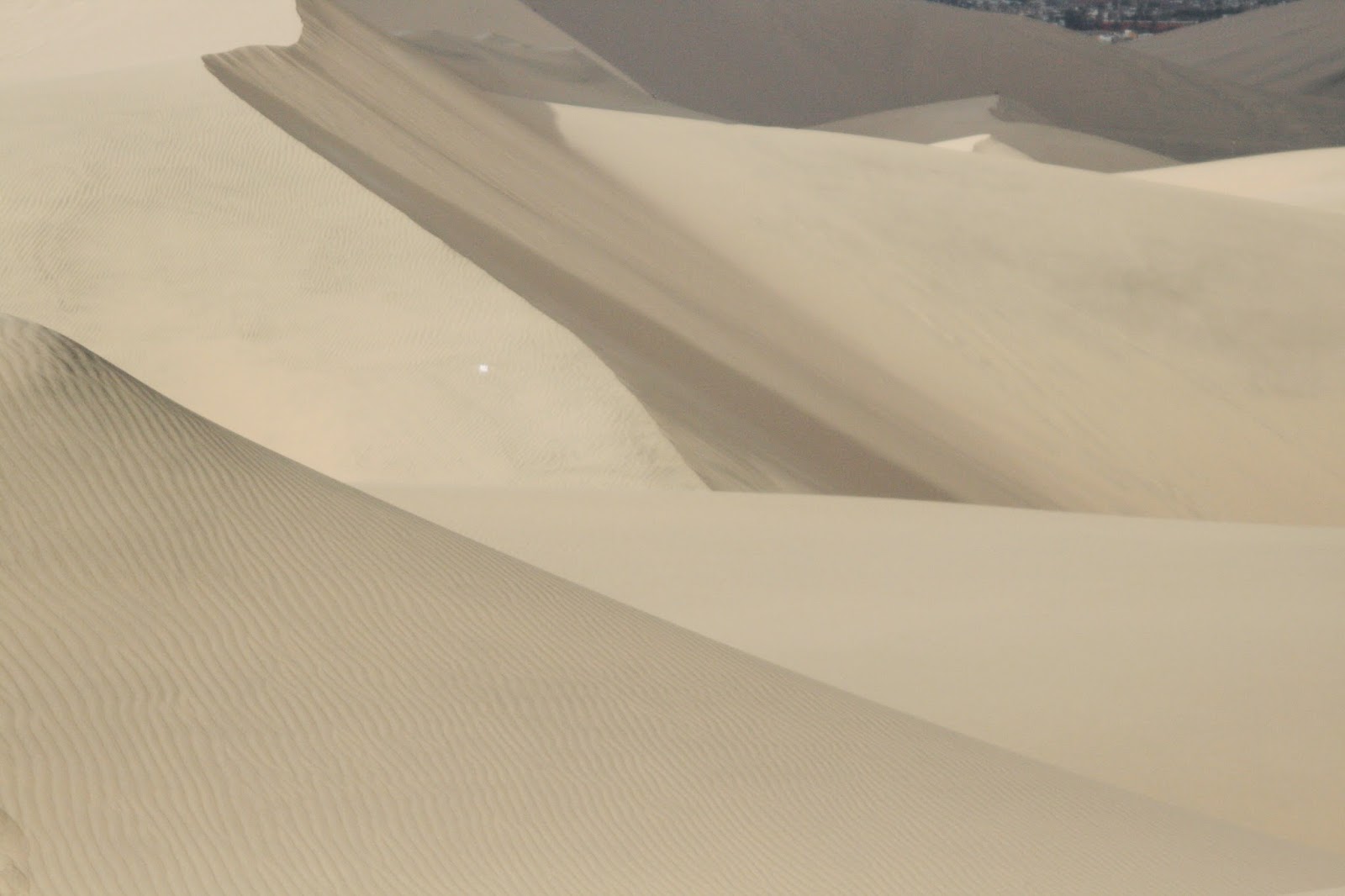 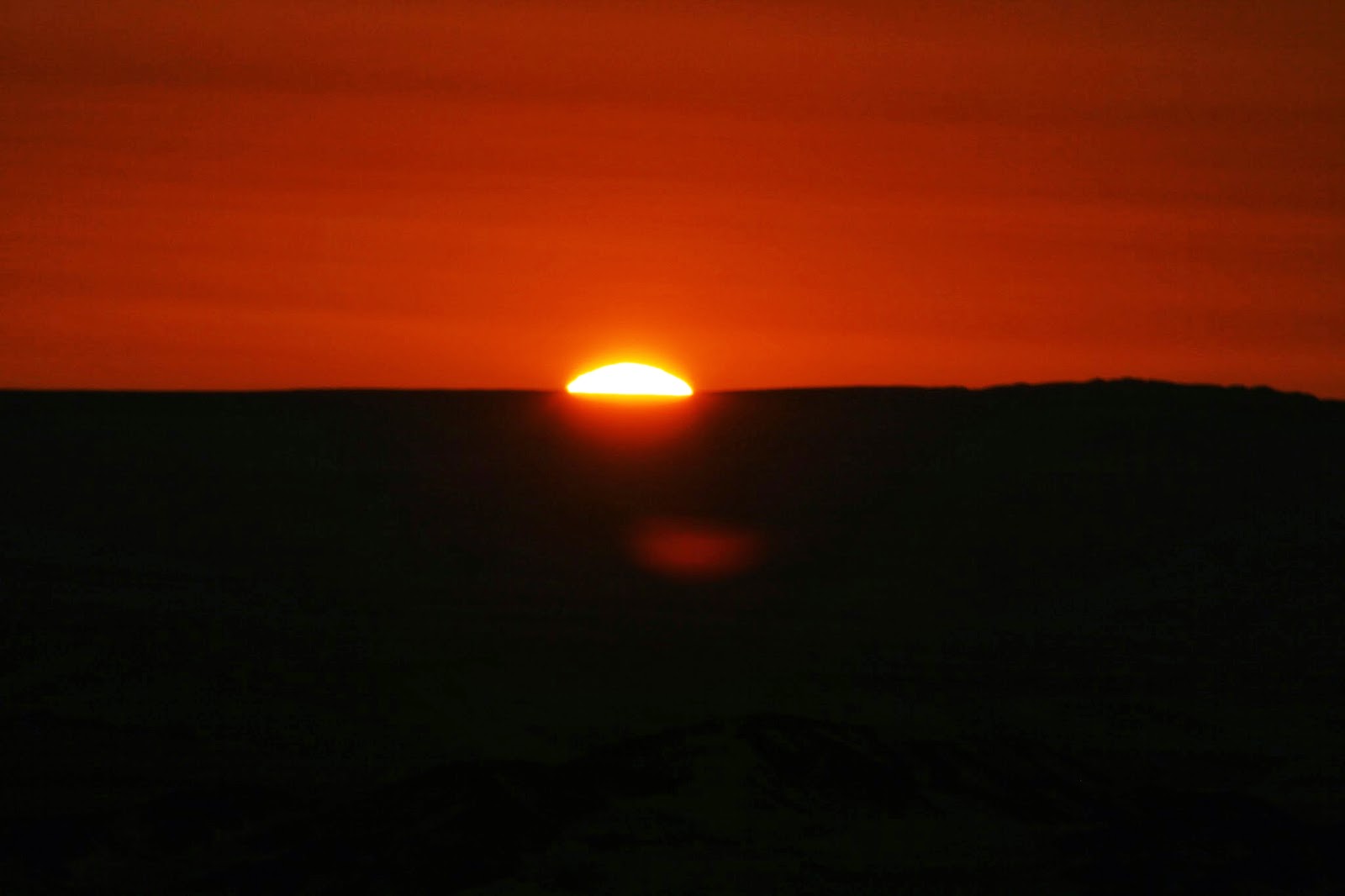 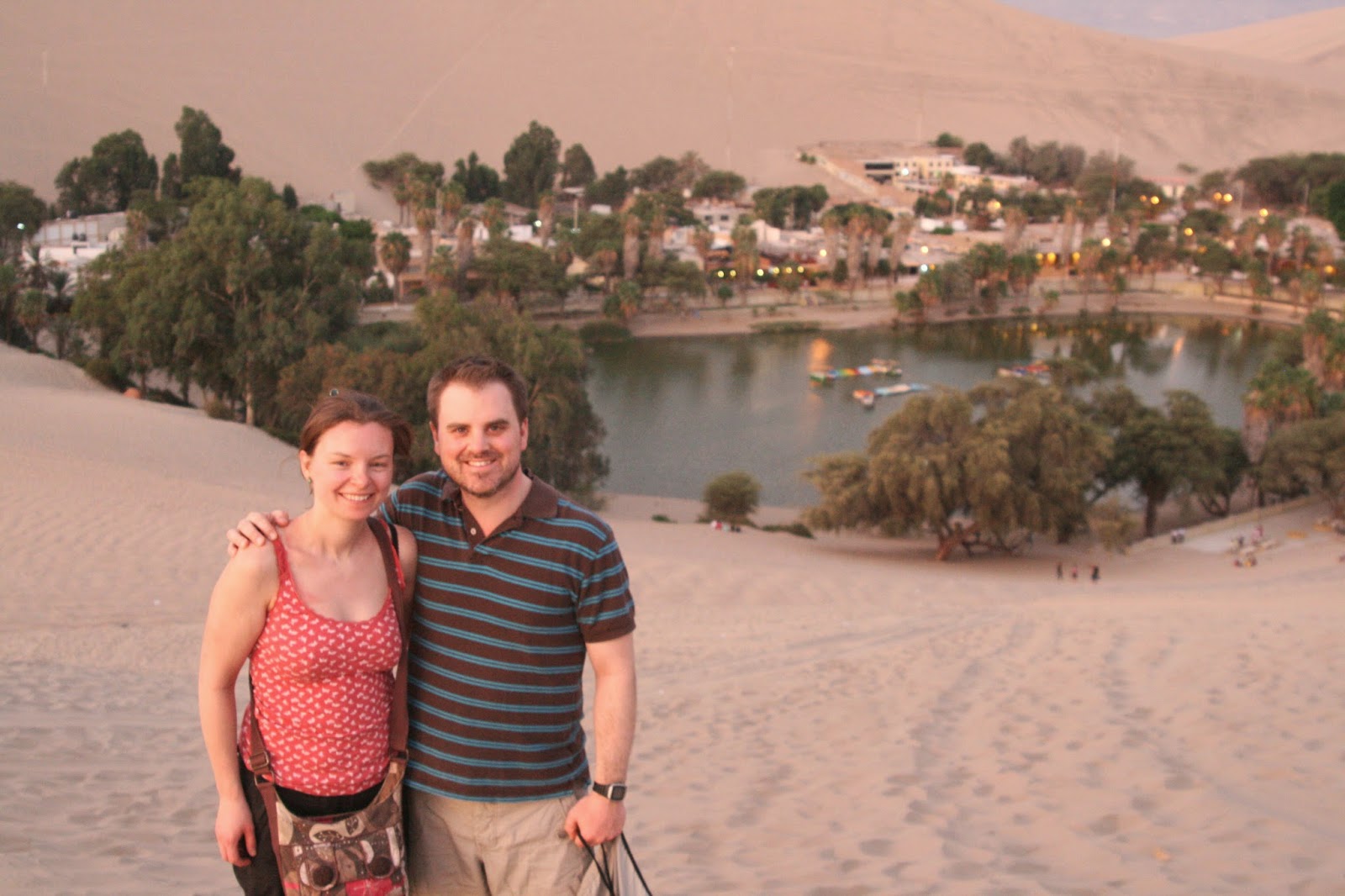 The ‘final’ stop on the Gringo Trail is the Nazca lines – a series of geoglyphs drawn into the Peruvian desert. There are hundreds of individual figures, ranging from recognizable animals, such as the monkey and the spider to geometric shapes and lines that cross the desert for miles. Most of the lines can only be seen from the air, so we booked our flight and away we went! The flight was an experience in itself. Looking at the Slovenian woman at beside me on our small, 6 seater plane get paler and paler I was particularly glad I took a motion sickness pill. 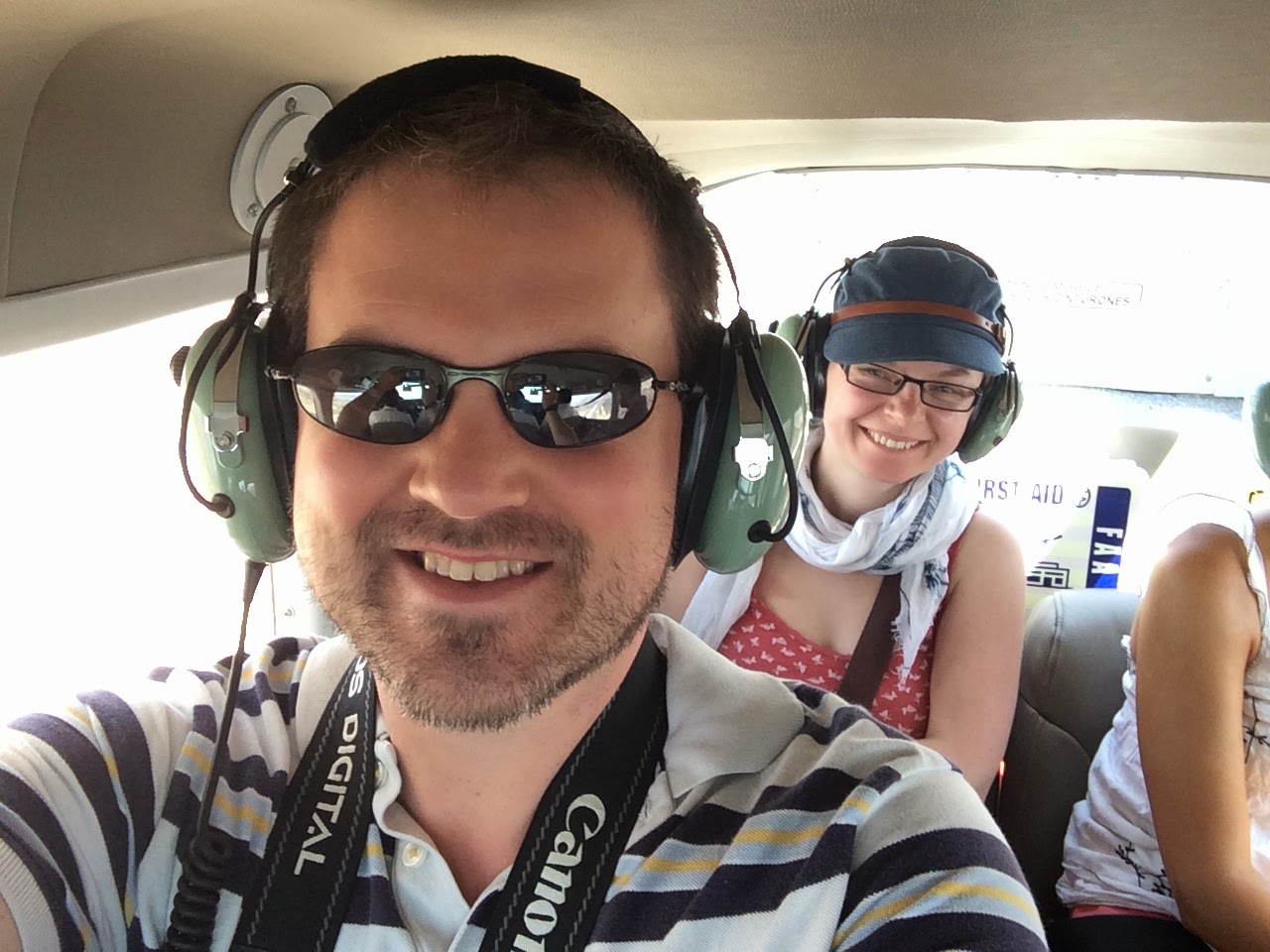 Our pilot was great at pointing out the lines and making sure we'd seen everything. My camera was much less good at picking them up, so the pictures below are a selection of James'.

There are more pictures of the lines in the photo section of the blog (see above). Take a look and let us know which is your favourite!

To find out about our accommodation choices while in Peru, see Where we stayed - Peru.