We spent our first four days in Sri Lanka in the 'Cultural Triangle' area of the country, basing ourselves in Habarana. Our first day was spent at Sigiriya and Dambulla.

On our second day we explored the sprawling ruins of 1,000 year old Polonnaruwa. 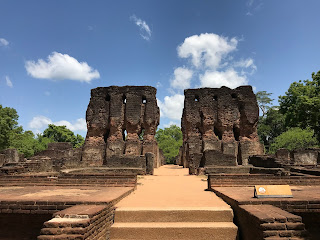 It was Sri Lanka's capital city for 300 years from the late 10th century but was abandoned in the 13th century, as it was proving more and more susceptible to Indian invasion. A 'new' town has since built up around it.

We got a tuk-tuk from our homestay to the town. Our driver then drove us around to all the sites, which seemed to get more and more impressive as they day went on.

You can also hire bikes to cycle round, but it was very hot the day we were there and so I was glad to be shown from place to place by our driver. Locals can visit the site for free, so we didn't have to pay for the driver.


We didn't have a guide and didn't feel like we missed out particularly. The Lonely Planet had some good information and there were signs around the place, so it was pretty easy to know what you are looking at.


The museum in the building where you buy your tickets is also useful for getting a good grounding of the site.

Some of the buildings and ruins are still considered holy and so you need to make sure your shoulders and knees are covered. You'll also have to take off your shoes to look inside some of the ruins - my feet were happy that my socks protected me from the heat of the stone, warmed excessively by the midday sun.

Some highlights
We started at the 'Southern Group', with a debate about who this is and what he is holding. The lively (?) disagreement is over whether its the king, Parakramabahu I, holding papaya or and Indian Vedic teacher holding a book. 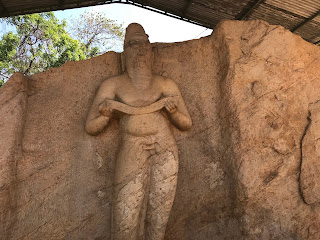 Then it was on to the 'Royal Palace Group' for the impressive thick stone walls of the former palace (see top picture), the ruins of the Audience Hall and the bathing pool.I particularly enjoyed the carvings on the Audience Hall. 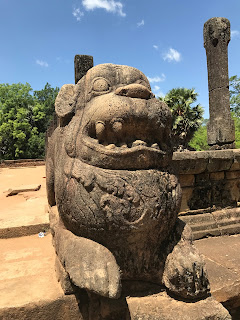 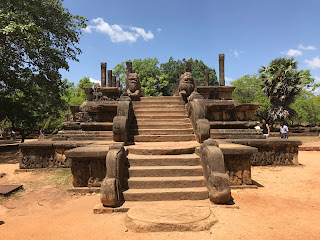 The Vatadage is the most important ruin in the 'Quadrangle' area. 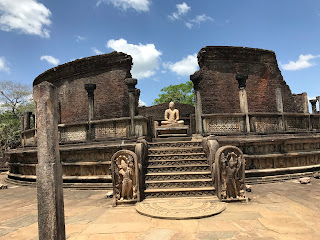 It is also where this 'sandakada pahana' or moonstone, reported to be one of the best remaining examples of the entrance stones typical of the era, can be found. 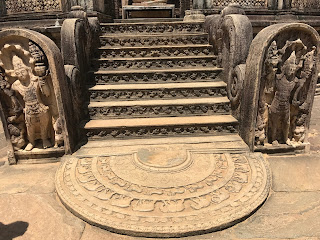 In the 'Northern Group', I was particularly taken by the striking white dagoba, against the blue sky. 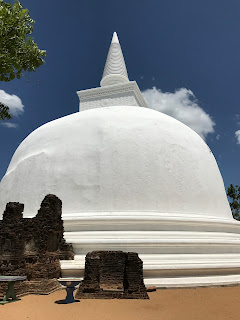 What? You want another photo of it? Oh go on then... Just stunning! 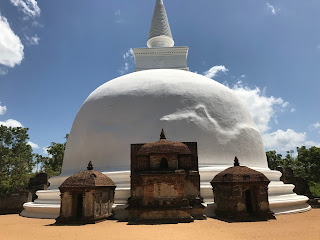 The enormous Buddha statues nearby were pretty impressive too. 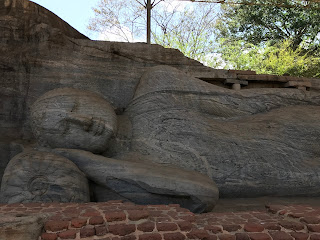 The ruins at Polonnaruwa are well kept and incredibly impressive. Set over a huge area, there is plenty more to see than I've outlined in the post - definitely a full day for the average visitor.  I tried to suggest to James that the ruins may be as impressive as Pompeii. He was unconvinced. On reflection, the two are very different and Pompeii is much better preserved, but Polonnaruwa was fascinating and for history buffs, a Sri Lanka must-see.

Potential scam alert: A couple from our homestay went to visit Polonnaruwa by bus. When they got off the bus, they were approached by a tuk tuk driver who offered them tickets that were cheaper than the normal entry, as well as their driving services for the day. The tickets were forged and at one point having been alerted that the security were on their way, their driver abandoned his tuk tuk and led them out through some woods by foot! Buy tickets from the ticket stand, people!