Stone Town on the whole was a little bit of a disappointment. Lonely Planet describes it as 'a magical jumble of cobbled alleyways ... (which) make it easy to spend days wandering round and getting lost'.

In reality, it felt more than a little tired, with the once fine buildings in desperate need of some TLC and the 'jumble of cobbled alleyways' filled with small shops selling the same tourist fare for over-inflated prices.

Down along the seafront, pushy salesmen tried to sell us snorkelling trips or a walking tour of the city, making for quite an irritating stroll by the sea. We're pretty well travelled and so fairly used to dealing with this type of hassle. It was far from the worst we've experienced (yup Luxor, Egypt, I am looking at you), but I just wasn't in the mood for it (and maybe we're also getting older and grumpier!)

However, all was far from being lost for us in Stone Town and a real highlight of our visit (aside from the doors!), was the evening we had at the Tower Top restaurant.

The restaurant is at the top of the Emerson on Hurumzi hotel, where we were also staying. The building was built by a man called Tharia Thopan, who was very close to the Sultan and so permitted to build the second highest building in Stone Town (the first being the Sultan's house, known as the House of Wonders). 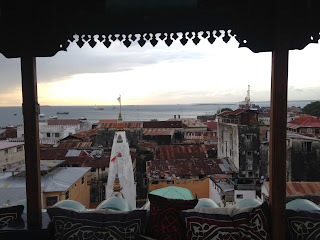 The restaurant is on the roof of the building and affords impressive views across Stone Town. We arrived about an hour or so before sunset and enjoyed a couple of cocktails, while we admired the views. 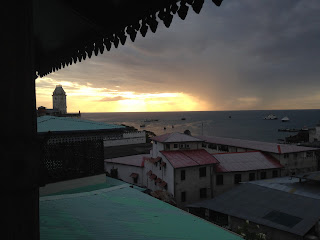 Then as the sun started to set, we were treated to a symphony of competing calls to prayer ringing out from the 51 mosques dotted around the town. Just as the sun set, the Hindu temple across the street, also joined in. 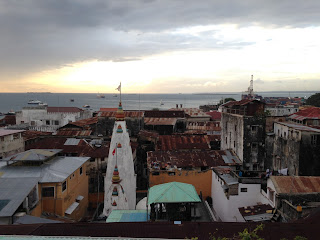 We chose to sit in the 'Swahili' seating area, with its low tables and colourful cushions. 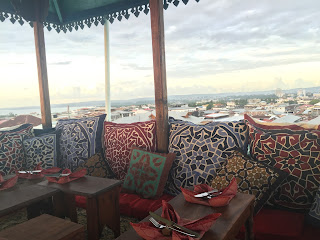 Our waiter, Barack, explained that the style of the meal was of a Zanzibari wedding feast, known as Soro, very apt as it was our honeymoon. 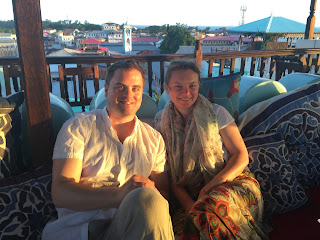 The idea of Soro is a number of tasty courses eaten over a number of hours and shared between all the guests, accompanied by music and singing.

At the start of the meal, the waiters came round with water to wash our hands 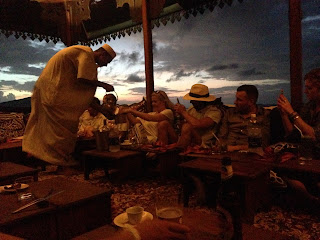 We were then treated to three courses of a delicious fusion of East African, North African and Middle-Eastern fare, including pitta with a delicious beetroot dip, goat curry for James and a vegetable tagine for me. We didn't get many photos of it (partly because of the light), but the food really was very good. 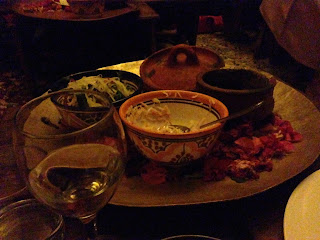 While were eating, we were treated to beautiful Zanzibari taraab music from a local band. 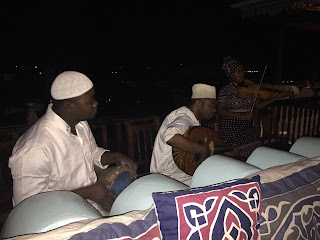 I was particularly taken with the singing and dancing of the female singer. She had a beautiful voice and provided the perfect accompaniment to our delicious banquet. 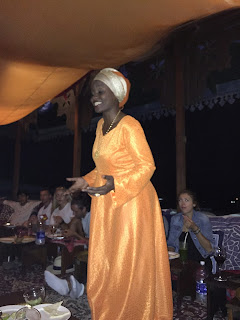 If you are in Stone Town, the Tower Top restaurant on Hurumzi does lunch as well as dinner, but it is a special experience to view the town from above, as the sun goes down, cocktail in hand.