I had little to no real expectations of Naples, before we visited. I knew very little about the city and we were only really going there as it was the entry point for us to visit the Amalfi coast from the UK.

As our departure date neared and I started to do a little more research, I found quite mixed reviews of the place: some people seemed to love it and others reported that it was dirty and dangerous.

Happily, what we found when we got there was a very real and lived in city, with beautiful architecture (even if some of the paintwork was peeling or fading) and some fantastic food.


And no we didn't find it dirty or dangerous. A bit chaotic and resistant to modernisation perhaps, but friendly and interesting and we never felt threatened,
Here's some of what we saw on our visit.

After a very early flight, we started our exploration of the city walking along the seafront from our hotel in the Chiaia district towards 'The Castle of the Egg' (Castel dell Ovo). It has its name, as reportedly Roman writer Virgil buried an egg on the site warning that if the egg broke, the castle would fall.

After a brief stop for lunch on the little island of Megaride in the shadows of the castle, we went for an explore inside.  Its worth a visit if only for the views it provides of Vesuvius, the Bay of Naples and the islands.

The small alleyways and streets inside the castle walls are also very pretty and very photogenic.


The Italians certainly know how to do churches. With an imposing facade that is reminiscent of the Pantheon in Rome, the dome rising up behind it is over 50 metres high.


On the other side of the square, the Royal Palace was hidden behind a screen when we were there, undergoing restoration. So we didn't snap any photos of the Palace, but here's a view across the square.


The old town
In our short visit, we didn't get to wander the old town as much as I'd have liked, but we did enjoy walking down the narrow streets, while sampling some local ice cream and admiring the architecture. (We were very tired after our early morning flight, by the time we got to the old town and so didn't take many pictures). 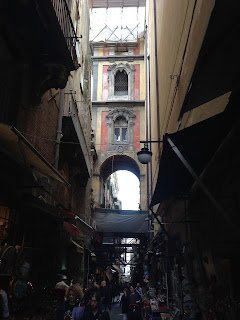 We were particularly fascinated by one section of the old town that seemed to be exclusively selling the necessary bits and pieces for building a miniature historical scene of country life. 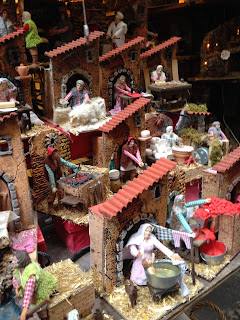 Internet news story descriptions of this area talk about the making of nativity scenes. While this might have been where the miniature shops started their business, the scenes now being built are certainly not exclusively the nativity.

Its worth a little nosey around, even if the shop owners are a little tetchy about you taking pictures.

Art in the City
At our very arty hotel, Micalo, the owner told us that a number of metro stations were 'art stations' and had been designed by world class designers and architects.


She recommended we have a peek at the Toledo metro station, designed by Spaniard Oscar Tusquets Blanca, with the theme of water and light.


Walking past, we decided to go in and the staff let us go down without buying a ticket. We were particularly impressed with the huge whole in the ceiling that reaches up to the square above. 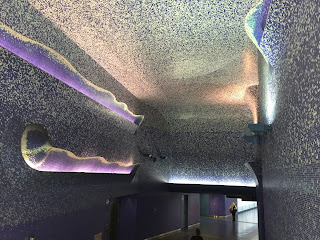 There are a number of other stations throughout the city that have also been given similar treatment. The Napoli Unplugged website has more information on the other 'art stations'.

We also found other artworks available to view free of charge as we wandered around the city. In the Castel dell Ovo, there were free art exhibitions in some of the rooms, including this interesting one, which for some reason had an udder/nipple theme!


Our verdict
Naples has a lot to offer. Its fascinating to walk around the city, which seems to be a bit stuck in time and resistant to gentrification. Its also worth visiting for the food. We did not have one bad meal in Naples and the restaurants (unlike in Capri and the Amalfi Coast) were very good value.

Warnings about it being dangerous seem to be outdated. Its a big city, so be sensible as you would be in any big city, but we never felt unsafe.

There's also lots of Naples that we missed on this visit and we'd really like to get to know the city (and its restaurants!) better


Have you been to Naples? What are your top tips? Favourite sights (or pizzeria)?