Recovering the past: In Flanders Fields Museum 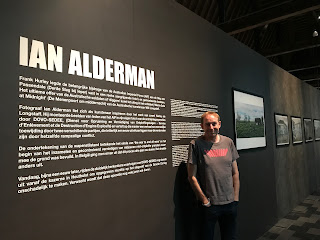 Right, so I may be a bit biased - the artist Ian Alderman is a good friend - but if you are in Ieper/Ypres between now and the end of the year (2017), you have to visit the 'Recovering the Past' Exhibition at the In Flanders Fields museum. 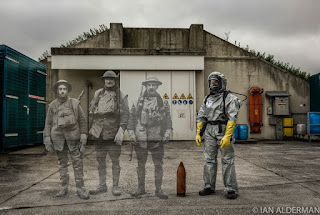 Ian has spent over 5 years with the section of the Belgian army tasked with disposing of unexploded munitions from both world wars.

There is tons of it still finding its way to the surface across the Belgian countryside. So much so that the team in the army charged with dealing with it is comprised of around 300 people.

Ian took pictures of these experts going about their job and has juxtaposed photos of Australian soldiers from the archives onto the modern scenes. 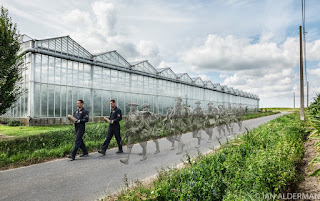 In so doing, these men are given a 'new' story and helps to connect us to them, as we see past and present side by side.

The legacy of the devastation of war is also brought to light, as the photos show the impact the past is having on people living and working in Belgium today. 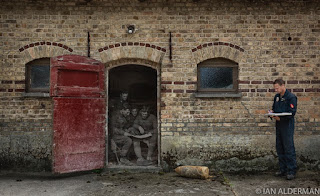 Just imagine finding an unexploded bomb or canister filled with toxic gas in your back garden or in amongst the crops of your farmland! The technical development of these photos is also fascinating. Ian identified which images of the Australian soldiers he was going to place in each scene, before taking the modern photos. This meant lining up the modern photo at the right height and ensuring that the weather and lighting would work in melding the two images together.

He also had to add in lots of features afterwards, such as ensuring shadows to make sure it really did look like the ghostly figures of the past are in the new photo.

As well as the exhibition in the In Flanders Fields museum, Ian has a book with his images that you can buy here. 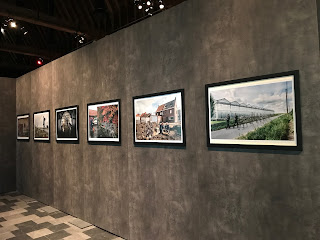 There is more about the project here.