After enjoying our first Hindu wedding in Chennai, India, we flew to Sri Lanka for 10 days to explore the 'Pearl of the Indian Ocean'. It was just a short hour and half flight across the Indian Ocean.

We spent our first four nights in the country in Habarana - a town in an area of Sri Lanka known as the 'Cultural Triangle'.

There's not much to see in Habarana itself, although I did enjoy our short strolls around the non-paved dusty back streets, where excited children called out to us, we wandered past local businesses and shops and caught a tiny glimpse of every day life in Sri Lanka.

But we did not go to Habarana for these strolls. We chose Habarana as a base to visit the key attractions of the local area - national parks, ancient cities, temples and a big rock (or two).


Sigiriya
Sigirya is basically a big rock 200 metres high in the plains of the central province. It is a hardened magma plug from a long since eroded volcano. 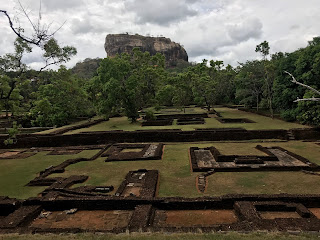 Our first morning in Habarana was spent there. It was a place I identified, as definitely 'on the list' from the very beginning of my travel planning to Sri Lanka and I was very excited to visit.

On the top of the rock are ruins, which depending on who you listen to, were either a fortress-palace built during the reign of King Kassapa AD 477-495 (the established view) or a monastery (as has been argued more recently by archaeologists).

Either way, the rock and the manicured gardens around it are very impressive.

Halfway up the rock are a collection frescoes - paintings of buxom, thin waisted women on the side of the rock. They are either the King's harem or celestial beings. I don't have any photos, as you're not allowed to take any, but they are worth a look.


We spent the morning climbing the rock, admiring the views from the top, walking round the gardens and then visiting the well laid out museum. 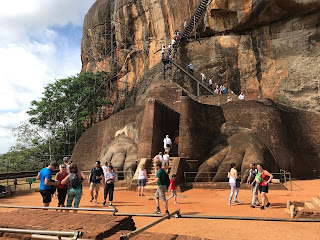 It was very windy up top. Very windy.


But the views of the surrounding plains were incredible. 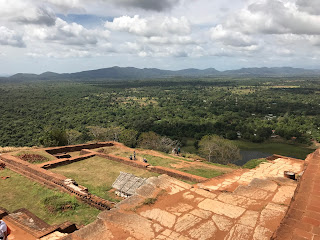 It gets hot, so its best to start as early as you can. The site opens at 7am. We got there around 8.30am and headed straight for the rock, leaving the gardens and museum for later.

The other rock
If Sigiriya whets your appetite for climbing hardened magma plugs, you're in luck!

There's another very nearby, called Pidurangala. Its much cheaper and much quieter than its famous neighbour and it's also possible to climb it in time for sunrise. We missed it off, but this post by Man vs Globe explains why you shouldn't. Apparently, there's a great view of Sigiriya from its less famous neighbour. Ah well, its always good to have an excuse to go back!


I actually didn't have any particularly great expectations of them. I hadn't read that much about them. I just thought that given where Dambulla was, it logistically made sense to visit them after the big rock, before heading back to Habarana. 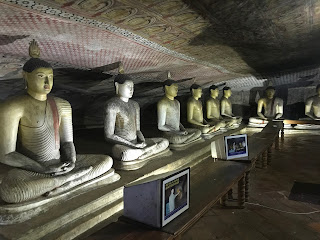 However, I was very impressed by the huge Buddha statues and the beautiful paintings on the rocks inside the cave temples and couldn't stop taking snaps. 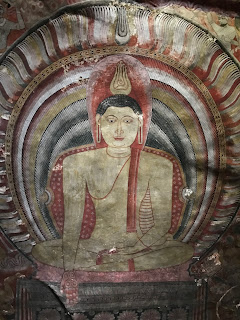 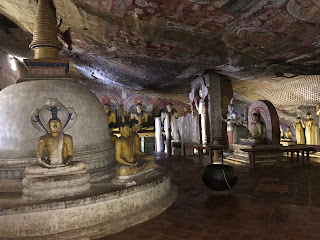 The photos don't quite do it justice, which may have been why I hadn't been 'that' excited about going. (But I'd recommend going if you can!) 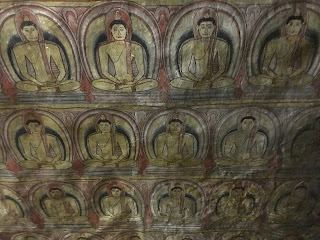 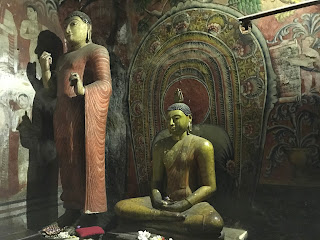 I was particularly taken by the decorations on the feet of the lying down Buddha. 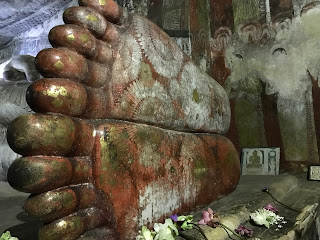 The temples are a 20 minute walk up hill. At the bottom of the hill, we stopped to look at the rather garish golden temple. 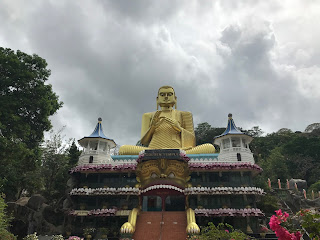 I was a little surprised by the claim near the temple that we were witnessing the biggest Buddha statue in the world. 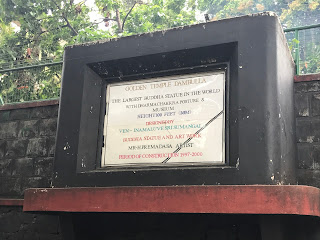 I felt sure that this claim to fame would have come up in some of my pre-travel research. Sure enough, a quick google confirmed my scepticism - 30 metres just ain't gonna cut it among the several Buddha statues I found online of 70 or so metres high.

It's still pretty big though! On the other side of the courtyard, facing the big Buddha is a huge golden stupa. Size seems to be the thing here! 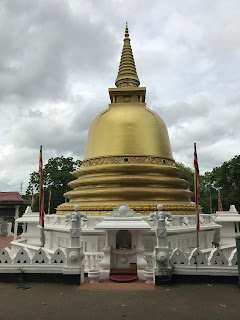 We stood and watched while monkeys tore apart and ate the banana and flower offerings that had been laid down in the shrine next to the stupa. Those cheeky monkeys! 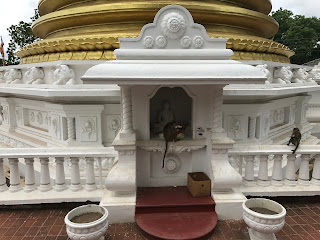 Before heading back to Habarana, we had a little nosy around the wholesale fruit and veg market in Dambulla, It was interesting to see the mountains and mountains of different fruits and veg. Unfortunately, our lack of Sinhala meant that we couldn't find out what some of the more unusual looking produce was. It is worth a little mosey around though, if you're passing by.

Practicalities
We arranged for a tuk tuk to drive us around for the day. We paid 3000 Sri Lankan rupees for his time (approximately 20US$). This included pick up from our hotel in Habarana and half an hour drive to the rock. He was waiting for us in the car park at Sigiriya and drove us to the Dambulla cave temples (about another 30 minutes). Then he stopped off for us at the Golden Temple and the market and found us a bakery for some lunch, before dropping us back at the hotel. So a pretty good price all in all. 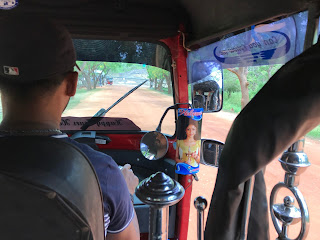 Have you been to Sigiriya and Pidurangla? What did you think? What about the cave temples and the golden temple? Were you impressed by the 'biggest buddha statue in the world'?