At best this sign symbolises false hope. At worst its an outright lie.

I can't remember where I first read that a Tanzanian safari could include seeing the climbing lions, but it got inside my head. And reading our itinerary before we left, I saw again that one of the national parks we were visiting was famous for its climbing lions. So I told everyone that that was what I was going to see, 'climbing lions'.

Well we saw none, zero, zilch.

Funnily enough, the climbing lions live in an area where there are lots of trees - a forest, some might call it - and so they are hard to spot and apparently only climb trees when they get really hot. And while it may have been on the warm side for us, these lions are used to a bit of heat and so they stayed hidden in the vegetation below (if they were there at all, I have my suspicions!).

I tried not to be disappointed, particularly as we were surrounded by baboons, giraffe, elephant and countless pretty birds. I really wanted to see a lion though. Like really, really, really and soon decided it didn't matter if it wasn't in a tree.

The following day, we left our lodge on the rim of the Ngorongoro Crater at 6am and descended onto the crater floor.

Not long after we'd got to the bottom our guide took a right and pointed out a jackal in front of us. While we snapped photos of him, we started to hear growling (roaring?) in the distance and the hairs of the back of my neck stood on end. 'Can you hear that?', asked our guide. 'Lions', he said.

Using the binoculars, he spotted two lions in the distance to our left. They were hard to see, even with the binoculars, so I have no idea how he saw them. He then swirled round to the right and spotted another two in that direction - 'two big male', he said. And slowly but surely, these two began making their way towards us.

They seemed wary at first. When they were off in the distance, I could see them through the binoculars stopping to stare at us to suss us out.

Yet, by the time they reached us on the dirt track, they didn't seem to care about us and didn't mind us escorting them for a while, as they made their way to wherever they needed to be. 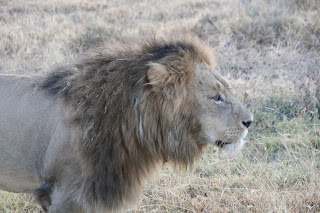 In the early morning light, with the fog rolling over the edge of the crater rim, our little stroll with our new feline friends was unforgettable.

And the rest of the day in the the Ngorongoro Crater was punctuating with lion sightings.

We felt quite sorry for these two, who found themselves surrounded by safari trucks.


But we enjoyed spying on the cubs playing in this little family, although they were quite a distance away. 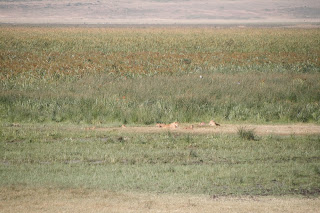 And these two females sunning themselves were an added bonus. 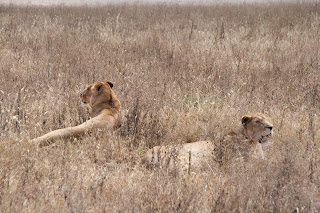 However, nothing really compared to that early morning sighting that started with a roar in the distance, while we watched as they slowly came into view and allowed us to accompany them for a short while.

And who cares if they weren't in a tree! 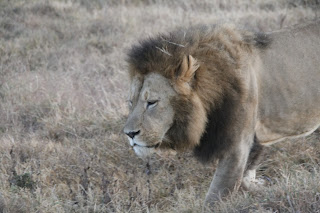 Have you ever seen a big cat in the wild?

Related posts
Trip report - Tanzanian Safari
Is that Bigfoot? No it's a black rhino. (It really is, I promise)
Hippo Pool - Ngorongoro Crater
Jaguar!